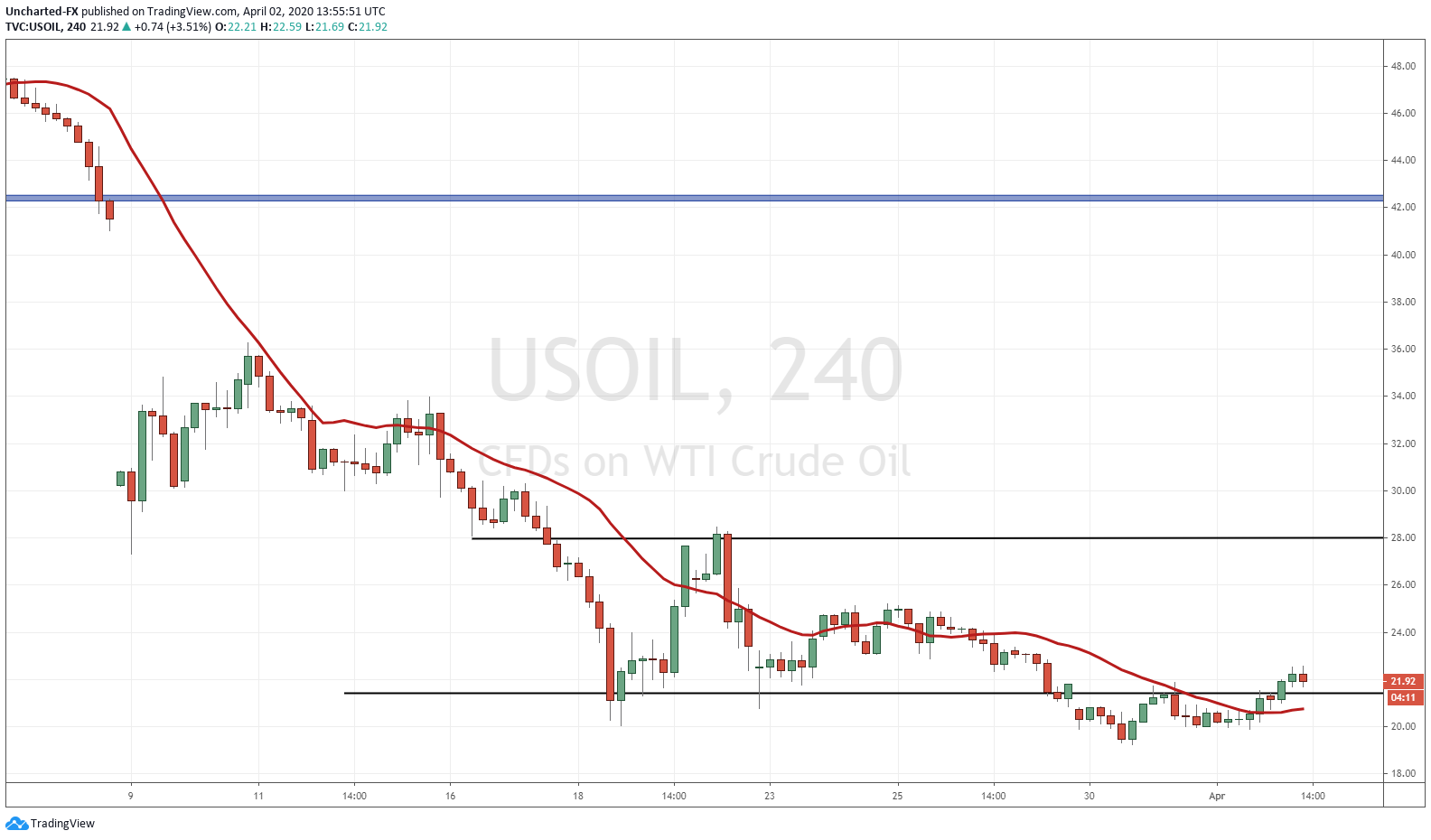 Let’s face it. Nobody is bullish on oil. It is apparent that a recession is around the corner, and with many people around the world confined to their homes, they will not be driving too often. We know the US supply is increasing (yesterday’s storage numbers came above 13 million) while demand is decreasing. Oil producing nations and companies will continue to pump more. The oil producing nations have incentive here. If they know a recession is coming, you would want to pump as much oil as you can at these prices to make as much money that you can. Game theory can often ensure that any type of production cut that fails to play out, there is incentive to cheat. Oil companies were given a lifeline when oil fell in 2014: debt. Governments essentially forced banks to loan to oil companies to prevent massive layoffs. It seems this will have to happen again…but hey, there are mass bail outs being promised for almost every industry.

On the geopolitical/political side, President Trump is scheduled to speak with the large oil companies tomorrow (Friday). We may hear some interesting developments on government support for oil companies in order to prevent massive layoffs.

We also have a story about China now being a buyer. China wants to build up her strategic reserve and wants to lock in oil contracts at these prices.

“Beijing has asked government agencies to quickly coordinate filling tanks, Bloomberg source said. In addition to state-owned reserves, it may use commercial space for storage as well, while also encouraging companies to fill their own tanks. The initial target is to hold government stockpiles equivalent to 90 days of net imports, which could eventually be expanded to as much as 180 days when including commercial reserves.”

“According to Bloomberg calculations, 90 days of net crude imports translated to about 900 million barrels. By comparison, the U.S. currently holds about 635 million barrels in its Strategic Petroleum Reserve, according to government data.”

Seems like China is helping in lessening this supply glut.

In terms of the oil chart, on the Discord channel, I have been speaking about a potential move higher. Now I want to be clear, this is a trade for me. I still think the fundamentals are weak…to be honest, the only thing that could push oil higher is some compromise between Russia and Saudi Arabia, a Middle Eastern conflict and perhaps an announcement of a virus vaccine/treatment that would give hope of the economy getting back to normal. Oil broke down making new lower lows, but price just did not continue. This was a sign of a weak breakdown. Price just stalled and ranged. Since no new lower low was being made, we have created a somewhat ugly looking double bottom pattern. The pattern is not textbook, nothing really is in trading, but it shows the failure to create new lower lows and may indicate a reversal. We did also break above the 21.25 zone here and it seems price will retest this zone. I would like to see a higher low swing confirmed here which just strengthens the bullish trade case.