On June 12, 2019 The Green Organic Dutchman (TGOD.T) announced that it has entered into a multi-year agreement with Neptune Wellness for extraction, formulation and packaging services.

Domestically (in Canada) TGOD does the same thing, but also sells organic weed to the Canadian recreational market.  As a kicker – TGOD recently entered the U.S. CBD beverage market.

Neptune Wellness Solutions is an extraction giant that’s been around for decades (long before hippies started patrolling their grow-ops with 12-guage shotguns).

The company has a massive (50,000 sq. ft) processing facility in Sherbooke, Quebec – loaded up with scientists and technologists who specialise in making oils.

The first year of the 3-year contract will account for 20% of the total value (the remaining 80% will come in year 2 and 3).

There are significant technological and geographical synergies here.

“This Neptune announcement is significant not only because it enables us to start manufacturing certified organic consumer wellness products at scale,” stated Brian Athaide, CEO of TGOD, “but also because of the large and sustained economic impact it will have in Quebec.”

TGOD and Neptune will face fierce competition to recruit workers – and may have to go out-of-province. Currently, Quebec remains well ahead of the national job vacancy rate at 4.1%.  About 121,000 job postings were unfilled in the province in the last quarter, compared with 314,200 in all other provinces combined.

TGOD will work closely with Neptune’s team in Quebec to obtain their organic certification.  To advance that objective, Neptune will “allocate a dedicated space to house and operate TGOD’s proprietary and/or licenced technologies”.

Neptune is in the process of achieving the EU-GMP certification, allowing TGOD to export products to other jurisdictions as laws and regulations permit. 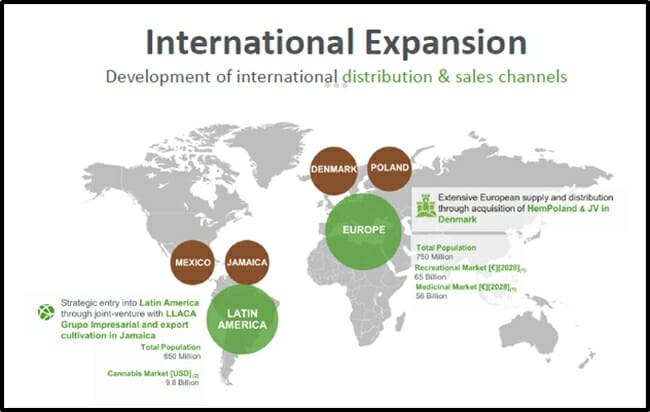 Many Canadian cannabis companies talk about “global expansion” and the “Europe opportunity”.  TGOD has moved well beyond the talking phase.

“This Poland acquisition will significantly add to the TGOD’s top and bottom line,” stated Brian Athaide, CEO of TGOD. “This accretive acquisition provides a gateway to Europe’s 750 million people, while accelerating our plan to become the world’s largest organic cannabis brand.”

HemPoland’s CannabiGold products are now available in pharmacies across Germany as well as through their respective e-commerce platforms, including Germany’s ten largest online pharmacies.

“We are excited to work with TGOD, an innovation driven company focused on value added and differentiated products,” stated Jim Hamilton, CEO of Neptune. “The ambitions of each company are well aligned”.

Full Disclosure: The Green Organic Dutchman is an Equity Guru marketing client, and we own the stock.