If you made money along the way on the notorious pump machine that has been Namaste Technologies (N.V), good work, but folks still holding on, expecting that it’s all going to come back around any day now should see me for a great deal on waterfront real estate frontage in Moose Jaw.

Namaste is toast, folks, and you have Aphria (APHA.T) to thank for it.

That dark, dirty secret out there is a lot of companies have over-inflated, under-delivering, bought-to-prop-up-market cap assets out there that they hope nobody looks too hard at, and when Aphria got busted in that scene by short sellers recently, and lost CEO Vic Neufeld and hundreds of millions in market cap as class action lawyers circled, more than a few boards of directors gulped air and looked for an exit in their own deals.

Prince among them has been Namaste, the board of which realized their former CEO, Sean Dollinger, might have been a little less than transparent on a few deals he bought off himself. Digging in to see how bad it was, they ended up firing Dollinger publicly, only to take him back as an advisor when he coughed out a noise that sounded like ‘lawsuit.’

Today, Namaste put out one of those news releases that investors will refer to for some time as the day it all fell apart.

Namaste Technologies Inc. confirmed today that PricewaterhouseCoopers, LLP will no longer be acting as the Company’s auditor. [..] The Company’s annual financial statements are due to be filed by March 31, 2019. The Company currently believes that it is unlikely that it will be able to meet such filing deadline. The Company will continue to assess this and will update the market in due course.

This is likely bad news. PwC doesn’t ditch a company this close to filing over minor disagreements or missed numbers. If they’re bailing on a paying client, there’s a bad scene afoot.

The Company has expanded the mandate of Norton Rose Fulbright Canada LLP, special independent legal counsel to the Company, to assist with the Company’s review of its compliance throughout its global business and operations, conducted primarily through its Bahamian subsidiary.

During this review period, the Company has elected to suspend certain initiatives that no longer align with the Company’s mission and strategic direction, such as the introduction of Namaste Café, a cookbook and H.E.A.L. product line in relation to its previously announced franchise distribution model.

Can I just say this:

This is what Dollinger was passing off as business before he was fired-not-fired. A cookbook.

In addition, the Company has also provided formal written notice of the termination of its agreement with ORH Marketing Ltd., in accordance with its terms. Management believes that the termination of these marketing and related initiatives can be achieved with minimal business disruption, and is expected to result in annual cash savings of approximately $3 million, which is net of expected transition costs.

That’s a shame, specifically for David Hughes, who was Namaste’s Chief Marketing officer and owns ORH Marketing. And was part of the iffy transaction that got the Namaste board in a firing mood in the first place.

The fact that the company thinks it can ditch ORH’s marketing initiatives with ‘minimal disruption to the business’ tells you what you need to know about what the company was getting for its money.

As an example, the last tweet by ORH Marketing was in February 2015. That was the second tweet it ever sent out, which admittedly may just be some cool hipster minimalist statement.

And here’s the ORH Marketing website, which is only missing a spinning letterbox gif, some flashing text, and a Geocities address, if it wanted to adequately pull off the appearance of a site from 1998: 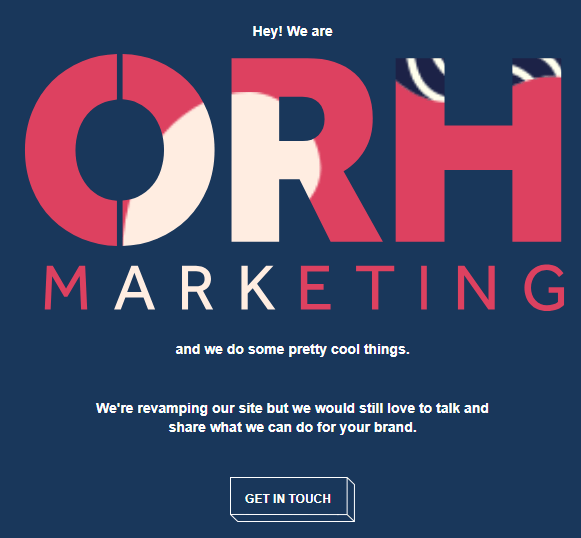 Meanwhile, in other negative news, goodbye Brazil – and 8% of Namaste’s revenue.

The Company has been advised that the National Health Surveillance Agency (Anvisa) in Brazil have identified irregular online advertising of certain tobacco products on a website operated by Namaste and have advised that they are proposing to commence https://e4njohordzs.exactdn.com/wp-content/uploads/2021/10/tnw8sVO3j-2.pngistrative proceedings in relation to same. In light of this, and to ensure ongoing compliance and operational efficiency, the Company has decided to temporarily suspend the sale of all of its products in Brazil pending a full compliance review with external counsel and other advisors.

The one thing Dollinger may have got right during his time running the good ship Namaste into icebergs was the acquisition of CannMart. I can’t tell you how much CannMart is selling, or how many folks are registered to buy there (mostly because i never believed any of Dollinger’s numbers on the topic), but I have spoken to the folks at GTEC Holdings (GTEC.C), who are selling product through the platform and seem very happy with what they’re sending out – and are no doubt happy to be the heaviest sold brand on the site, according to info I’ve heard from third party peeps.

Even a small monthly revenue figure would be a positive for Namaste and a good business going forward. Also: It would be a great asset for another company to buy.

And with Namaste talking about strategic reviews, that’s got to be on the table.

The big problem with Dollinger was always his Augustus Gloop-like insistence in being unhappy with anything that wasn’t the biggest, the best, and the hottest.

Just running a public company with a market cap that would take 187 quarters of revenue to justify was never enough for him. It had to be more. And louder. And ‘cooler’.

For what it’s worth, Namaste’s board is actually doing exactly what a sensible person would hope they would. They fired the man-child with the man-bun, they prevented him dragging them through the mud in court by giving him a back office so he can pretend he’s still important, and they’re cutting things that are unnecessary, costly, and don’t do what Dollinger said they would.

The problem for them is, even as much as Namaste stock has plummeted, it’s still sitting on a $270 million market cap that is inflated far beyond rationality, and if they’re in a ‘realism’ period, as opposed to the previous ‘hype period, that means there’s still likely some share price shredding to be done before things get sensible.

How much shredding? That’s going to depend on what those now late financials will say, what the Brazilian regulators decide, why PcW bailed completely, and how much stock Dollinger and his buddies are doing to cash out in the time in between. 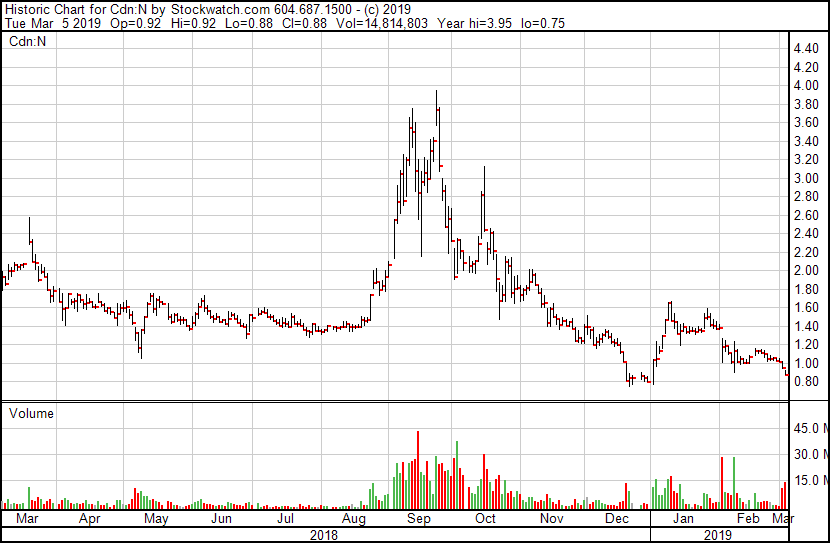 So far, it looks dire. I’m not going to say it’s not been cheaper over the past year, but it’s REALLY close.

Namaste is not alone in this. Wayland Group (WAYL.C), formerly Maricann, is looking like its financials will hold all sorts of night terror fuel, as two of their directors have bailed in recent weeks with no explanation as to why, an asset sale to the odious ICC Labs appears to be stalling, and those assets continue to be the subject of rumour, innuendo, and discussion around how WAYL CEO Ben Ward may have sold them to himself.

I’m not going to say WAYL stock has never been lower, but it’s REALLY close. 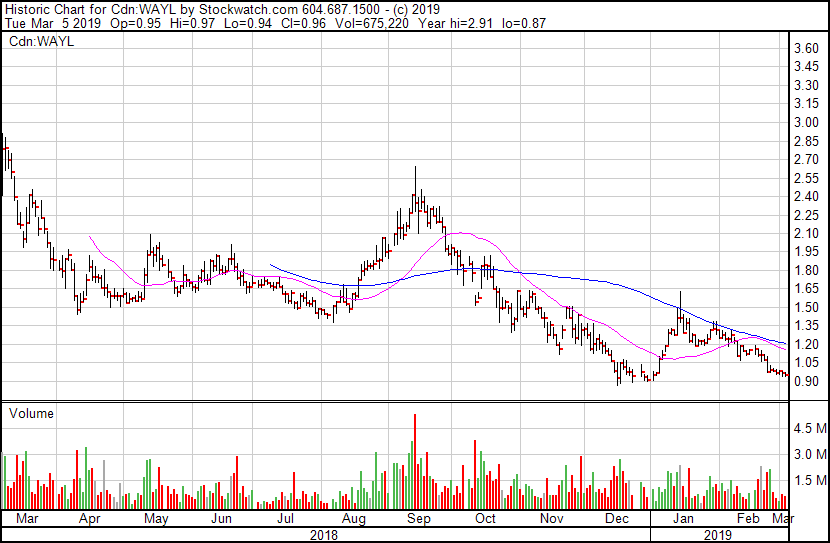 In fact, if you overlaid the charts of WAYL and N, you’d pretty much have one chart.

Weird how that works, isn’t it?

UPDATE! Two directors have bailed from Namaste today. And one of them has the surname Dollinger…

FULL DISCLOSURE: We hold no stock or conflict in any of the companies mentioned above except GTEC, who we quite like. We are providing market awareness free of charge to Wayland Group because we believe no investor should be unaware of how they do business.

3 thoughts on “Namaste Technologies (N.V) in freefall because duh”