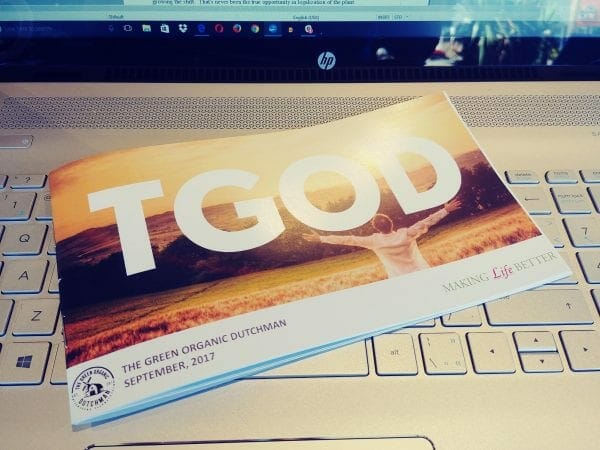 The Green Organic Dutchman (TGOD.T) has put off cultivation start dates for two of their sites to accommodate last–minute enhancements which they believe will substantially improve their production capacity.

The Hamilton, Ontario site was originally supposed to go live in in Q1 2019, and the site in Valleyfield, Quebec was slated to follow suit in Q2 of 2019. The company has since discovered “a need for design modifications” which they feel will ultimately lead to increased output.

After a few tweaks to their operating format, TGOD anticipates increasing their production capacity by 30%, expanding their overall cultivation yield from 156,000 to 202,500 kilograms.

These incremental expenditures for the larger processing facility, along with operating system improvements, resulting in the increased capacity, will be phased in over time and are expected to be funded from operational cashflow.

“Not only have we addressed the important redesign requirements, we have also made significant improvements to the operating capacity and capital timing of our facilities, resulting in an additional 46,500 kgs of productive capacity. This allows us to bring additional product to both Canadian consumers and global markets,” said Brian Athaide, CEO of TGOD.

These upgrades will come in two phases: The first phase is further divided into two parts, as the first 12 flowering rooms coming online in Q4 2019. The company says, in total, these rooms will produce 65,000 kilograms annually. Construction will then commence on phase 1b of another 12 rooms, culminating in a projected production ramp-up of another 65,000 kilograms slated for 2020.

The second phase begins in 2021. TGOD projects this phase will produce an additional 55,000 kilograms. The updated plan provides a combined output of 185,000 kilograms from Valleyfield, which translates directly to revenue potential.

The processing facility is also being upgraded to handle the combined output, and will also be scalable for future production enhancements.

“We have run a detailed cost-benefit analysis on Valleyfield’s enhanced strategy. The benefits of the additional production capacity on a phased basis are substantial and far outweigh the extension to the production schedule and additional capital cost. We will utilize our learnings from the design review and progress to date in each phase and continue to strive to achieve efficient and low-cost organic production,” said Athaide.

Construction on the 2,700 square foot Valleyfield facility started in January 2018, and was finished by April. In June, they received their cultivation license.

Here is a video on the Valleyfield site:

The changes to TGOD’s the Hamilton site are similar to those planned for Valleyfield.

They have modified their major systems from the original designs to increase production capacity from 14,000 kilograms to 17,500 kilograms. They’re installing vertical grow systems in vegetative rooms to increase available growing space.

The advantage of multiple tiers of vegetation is the more efficient use of space and increased plant counts, culminating in more flexibility in multi-strain production planning.

The facility redesign and improvements include the construction of a hybrid greenhouse, and will add another two months onto their open time.

TGOD has been in a protracted regulatory skirmish with the City of Hamilton since the summer, but says it expects positive results on their continued work the local planning appeal tribunal on amendments to the zoning by-law on hybrid greenhouses.

Here’s a video on their Hamilton site:

To date, TGOD has grown and harvested crops in its pilot facility and stored product for its medical pilot launch, beginning with Growers Circle this month.

Growers Circle is an award winning consortium of cannabis companies operating out of Las Vegas, Nevada.

TGOD is happy to report that the Growers Circle launch is still on schedule, and they say they are ready to deliver their high grade cannabis to medical patients Canada-wide this month.

“We are also excited to supply our first patients in the Growers Circle with premium organic cannabis this month, generating our first domestic revenues,” said Brian Athaide, CEO of TGOD.