Green Organic Dutchman (TGOD.T) must burn for a few days in order to regrow, bigger and better

A reader asked us a few days ago why The Green Organic Dutchman’s (TGOD.T) stock was plummeting over the last few weeks. It’s a fair question.

While we were coming up with an answer, TGOD got its sales license.

“We have been perfecting our organic grow methodology in Ancaster and are prepared for the Q1 launch to medical patients across Canada followed by the launch in adult-use markets in Q2,” said CEO Brian Athaide.

Getting your license is typically a moment marked by an increase in share price, followed by a sell-off as folks that were waiting for that moment step out with their profits. We’ve seen that with Supreme (FIRE.V), Namaste (N.V), and many more.

TGOD was no exception… 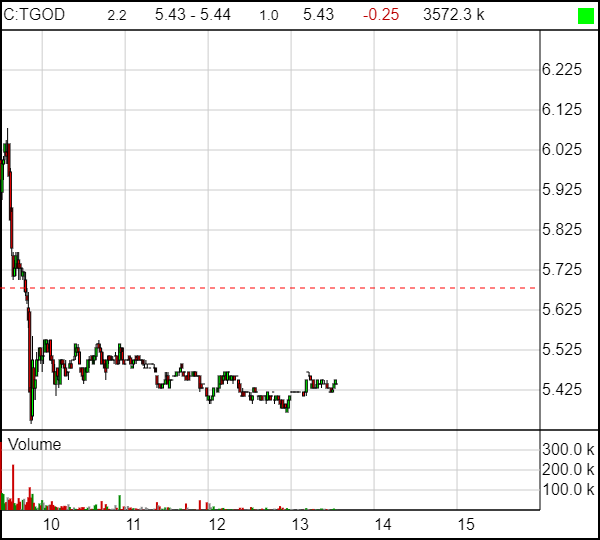 That’s a jump to over $6 on the license update, followed by a correction that has held for most of the day.

TGOD is being battered on all sides right now, a situation that was as inevitable as the company came to market locking up a lot of shares until early November.

The thinking goes that, when that paper goes free trading, with much of it having been bought for as little as $1.15 in the pre-market days, everyone who bought early will take their profits and leave the company abandoned, a withered husk never to return.

Yes, there will clearly be a lot of people taking profits that day, myself likely included. We’ve all done magnificently well on TGOD if we got in at that early financing stage of $1.15, or the latter stage of $1.65, or the go-public $3.65. With the stock currently at $5.40, that’s just profit all day and, no matter how you might like the company in the long term, taking that short term profit isn’t dumb.

But when we, the huddled masses yearning to be rich, make our sale, and the TGOD share price falls closer to that $3.65 level, others will be buying that stock from us. And those people won’t have a thought about $1.15 or $1.65 or anything else. They’ll just have their buy-in level, which will be damn cheap considering TGOD was running at the $8+ mark just a few weeks ago.

The sell off, and there will be one most assuredly, won’t forever scar TGOD and prevent it rising back to where it was when people weren’t so worried about a day of reckoning. Old investors will churn out, new investors will step in, getting a bargain into the deal, and the company will then sail into waters anew without the encumbrance of one-topic cynics.

If I sell (and, again, I may) it will be because I suspect there’s an over-reaction happening that I can perhaps miss out on, with a view to getting back in after a day or two of madness. But that’s all. The company stands tall for the long haul.

There was hand wringing aplenty from the anti-TGOD crowd this week, when Aurora Cannabis (ACB.T) and TGOD seemed to be looking less chummy than they had previously.

ACB had made a significant investment in TGOD when it was coming to market and, while the big Alberta producer wanted to extend their agreement to be able to buy TGOD stock at a 10% discount in the future, TGOD execs declined that offer because, well, Aurora isn’t TGOD’s daddy anymore.

Aurora Cannabis (ACB.T) honcho Cam Battley duly left the TGOD board and ACB sold 5m shares at a nice profit, and the folks who deal in chaos and panic decided that was evidence of the end of TGOD as we know it.

Those people want you to think Cam Battley, having committed a massive amount of millions in TGOD when it was going public, having done more high level due diligence than you or I could ever manage, and having sat on their board for months while doubling their money on the deal and getting a supply deal on top, suddenly decided to get out of the TGOD business entirely because there might be a dip in November.

That’s what they want you to think. That after all of that work and risk to join forces in the first place, with the two companies sharing resources on facility architecture, that the prospect of you guys taking your profits for a day was enough to undo everything and send Aurora running to the hills.

Let’s be clear: Aurora doubled their money on TGOD. They have their own cash needs, so selling up a chunk in advance of free trading day isn’t stupid, suspicious, or a shot across the bow. It just makes sense from a business perspective. “Thanks for the free money.”

But if ACB wasn’t interested in buying that back once the dust settles, perhaps in mid-November, why would they ask for an extension on their right to buy at a discount?

I’m not going to tell you that the two camps are sharing long tender kisses on a Friday night while watching The Notebook on the couch with a carton of Chunky Monkey. They’re not.

But their Facebook status has definitely moved to ‘it’s complicated.’

“Aurora has been an incredible partner to date, and both parties plan to continue the partnership. They invested $78.1-million into our company and added tremendous value across multiple areas of collaboration, including the design and construction of our Canadian facilities,” said Brian Athaide, chief executive officer of The Green Organic. “Our recent $75-million bought deal financing ensures The Green Organic has the capital necessary to continue our international expansion at a rapid pace, extending sales and distribution to more channels throughout Europe and Latin America. While the milestone option has expired, many possibilities exist in the future for our two very complementary companies,” continued Mr. Athaide.

Here’s what’s far more likely to have happened – in a figurative sense.

I told you it was complicated. But it all comes down to TGOD not needing ACB, and ACB increasingly seeing TGOD as a competitor. There will be some unplugging along those lines, until ACB gets to the point where it’s ‘just an investor’ and not such a big investor that board members have to leave the room when the CEO starts talking about confidential plans.

TGOD has made no secret that it’s a beverage play at its heart, and Aurora has its own beverage ambitions, reportedly with Coca Cola, maybe, allegedly, kinda, we don’t know. TGOD and ACB could choose to play together on that front, but TGOD’s ambition is not to be someone else’s service provider, but to own the deal themselves.

In short, TGOD wants to dominate, and can’t do that if it’s asking Aurora for permission.

For TGOD, to decouple from ACB a little is a good thing. They’ve raise loads of money and will continue to do so, and though investors love the idea that ACB might decide to acquire TGOD at some point, making everyone rich, TGOD doesn’t need to offer discounts anymore to get folks interested in them.

In short, TGOD has to burn for a few days so it can grow anew, bigger, better, stronger.

In the meantime, long holders are looking at that share chart and getting nervous.

TGOD has distinguished itself with its full-throated enthusiasm over the cannabis-infused beverage industry, and it has devoted substantial resources to developing its own line.

In June, the company announced its Valleyfield property would receive an additional build-out specifically for the cultivation of cannabis for its beverage and edibles division.

This build-out will deliver 40,000 kilograms of organic cannabis, nearly one quarter of the company’s “fully funded” capacity of 170,000 kilograms.

While this may be a profitable investment in the future, everyone invested in the Canadian cannabis market is aware that the Canadian government is not fully on-board with edibles yet.

The Federal government has tepidly said they will launch consultations on the legality of edibles somewhere between 2018 and 2019.

Granted, companies like Canopy Growth (WEED.T) and Aurora have either flirted with or signed onto the beverage market, but TGOD is doing so without an obvious outside backer from the beverage sector.

The second potential reason for TGOD’s volatility could be the company’s announced spin-off transaction, as reported in September by Equity Guru’s Lukas Kane.

A spin-off transaction, for those of us who are unfamiliar, is “the creation of an independent company through the sale of new shares of an existing business. The spun-off company is expected to be worth more as independent entity than as part of a larger business,” according to Investopedia.

The announcement was made September 25, right round the time the company’s share price began to cascade.

The logic here is that TGOD shareholders who bought shares in the company early may be selling off their stock and reinvesting it into the spin-off, leading to, or exacerbating, the price drop.

The third potential cause behind the drop is the freeze on TGOD’s non-IPO shares. As mentioned, the early TGOD stock becomes free trading in early November, but shareholders who bought-in during the company’s IPO on May 2, or in the time since, are, naturally, free to sell anytime. And some have. 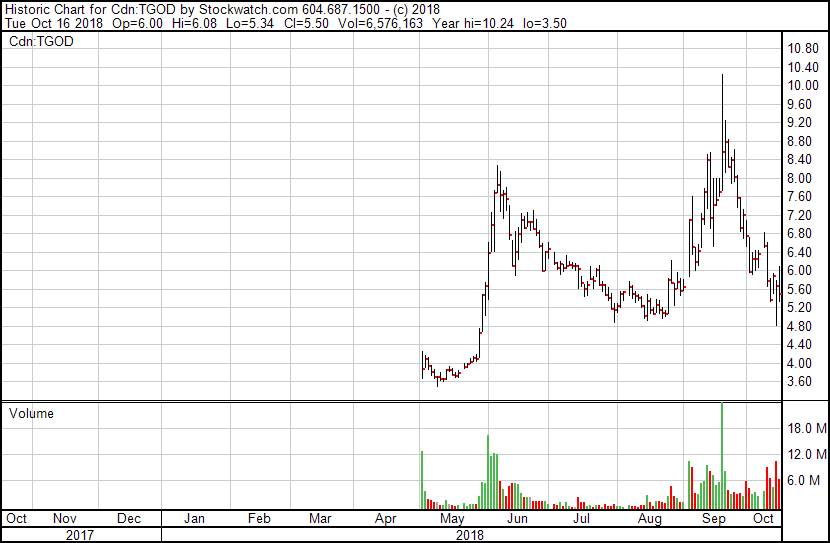 But may haven’t. Many are looking at the trend lines in that chart and seeing a stock that has done nothing but show increasing volume and a base forming around $5.50, which is a great return.

All weed stocks are getting pounded out right now, in the lead up to October 17’s updating of Canada’s federal weed laws.

Because nobody knows what’s coming, which companies will be negatively impacted, which companies are going to be well positioned, and – most importantly – weed stocks have had October 17 wired into their share prices for months.

There won’t be a boom in prices after October 17. There’ll be a fall. There always is, just as there’s always a massive price rise in November/December, a situation that has happened every year since 2014.

When TGOD came public and hit $7.50, we suggested folks, if they can, should think about taking their profits, since $3.65 to $7.50 is a great result. We stood by that even as the company surged to $9, bounced around the $8 mark, and through every up and down since.

You can love TGOD and sell TGOD, if the market is making a general move that doesn’t benefit it.

But consider this: November’s free trading day has always been coming – the stock still ran hard on news and technology and advances and licenses for the last several months. Those things haven’t stopped being true.

When November comes and goes, TGOD will still be cashed up and loaded for bear with no more paper issues holding it back, and all those things that drove it as a big lifter in the last few months will still be real business assets and moves.

By all means, consider the short term, but act on the long.

Maybe I won’t sell after all.

Full disclosure: TGOD is an Equity Guru marketing client and the author owns stock in the company. He’s also participating in the Plus Products financing.