GTEC Holdings (GTEC.V) has announced the scope of its proposed dispensary network which includes opening 11 Cannabis Cowboy dispensaries in Alberta before year’s end.

“Cannabis Cowboy” is a team of revolutionary pioneers blazing a trail for recreational cannabis retail in Canada. Legalization is fast approaching, and the team has been rapidly growing to meet the demand for recreational cannabis products and services. Cannabis Cowboy has developed an ambitious growth strategy to develop up to 30 turnkey retail locations in Alberta, with an aggressive real estate acquisition strategy for retail locations in the British Columbia and Ontario markets.

Cannabis Cowboy has received approval for 10 of its Alberta development permits from various municipalities, including Calgary and Red Deer.

The company expects to have 11 dispensaries opened and operational in Q4 and an additional 14 by Q1 2019.

To supply these locations, GTEC Holdings will continue to work closely with its subsidiary and Invictus (GENE.V). 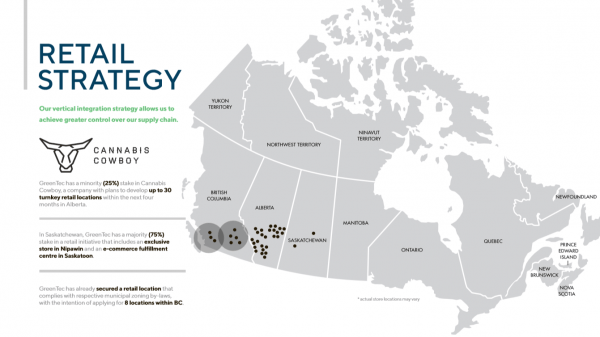 GTEC Holdings has also applied for dispensary licenses in Saskatchewan, Manitoba and B.C.

The company has successfully made its application to the Saskatchewan Liquor and Gaming Authority for dispensary licenses.

Construction of its dispensary in Nipawin, Saskatchewan is currently underway, as is the construction of a warehouse for its online sales purchases alongside the finalization of the e-commerce platform itself.

Both the warehouse and e-commerce platform are expected to be up-and-running during Q4 2018.

In Manitoba, GTEC Holdings is making headway on establishing retail locations as well.

The company was notified by Manitoba’s Procurement Services Branch that its application passed the initial screening. GTEC Holdings has since been shortlisted for the opportunity to participate in a retail license lottery. The date for this lottery is yet to be decided.

GTEC Holdings has not yet acquired any dispensary licenses in B.C. The company does, however, seek to open eight retail locations there.

Norton Singhavon, CEO and chairman of GTEC Holdings, said he was proud of his company’s growth: “Once the doors to our first retail locations open in the coming weeks and months, we will have successfully executed our vision of becoming one of the few companies that have achieved full vertical integration.”

The company’s JV with F-20 Developments has delivered final designs for the JV’s indoor cultivation facility in Vernon, B.C.

Phase one of the facility’s construction is underway and GTEC Holdings expect to complete designs for phase two by Q1 2019.

Tumbleweed Farms plans to begin cultivation in the fall and is working with Pacific Agricultural Certification Society to meet organic-product standards. 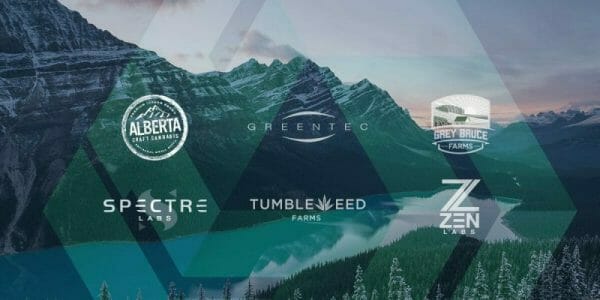 Grey Bruce Farms is also conducting its own construction projects. The company is building a 15,000 square foot craft cultivation facility in Ontario and expects to commence cultivation in Q4.

Spectre Labs has recently acquired real estate for its proposed extraction facility in Kelowna. The company has put together early designs for the facility and has also received encouraging response to its dealer’s license application from the Office of Controlled Substances.

Diagnostics laboratory, Zen Labs received its dealer’s license in July. The company now plans to expand the license’s jurisdiction to encompass the extraction of cannabis oil.

Full disclosure: GTEC Holdings is an Equity Guru marketing client and we own stock.