iAnthus’ (IAN.C) reports strong revenue growth in Q2, in addition to respectable cash assets and the successes of its east-coast dispensaries.

MedMen (MMEN.C) is out there, telling the world that its dispensaries will rule the US, but they’re a long way from showing the sort of revenue their market cap demands…If we want value, IAN has all the things MMEN has, but for a $374m market cap, and they have cultivation licenses in Florida, Vermont, Massachusetts and New York.

Importantly, many of those states allow license holders to home deliver, which means the company can sell state wide, not just out of a shiny Apple store. They also have partnerships in places where direct ownership isn’t feasible, including Colorado and New Mexico.

Q2 results for iAnthus show over USD$27 million in the company war chest and nearly $1.7 million in revenue for the quarter, more than tripling revenues reported during the same period last year.

During Q2, iAnthus also completed a round of financing with Gotham Green Partners, raising net proceeds of $46.0 million for the repayment of January debenture, continued facility build-outs.

The CEO of iAnthus, Hadley Ford is a banking/operations/healthcare-innovator…Ford grew a network of cancer treatment centers to $100 million in annual revenue.  He also spent 14 years on Wall Street, where he completed “over 150 transactions worth billions of dollars. 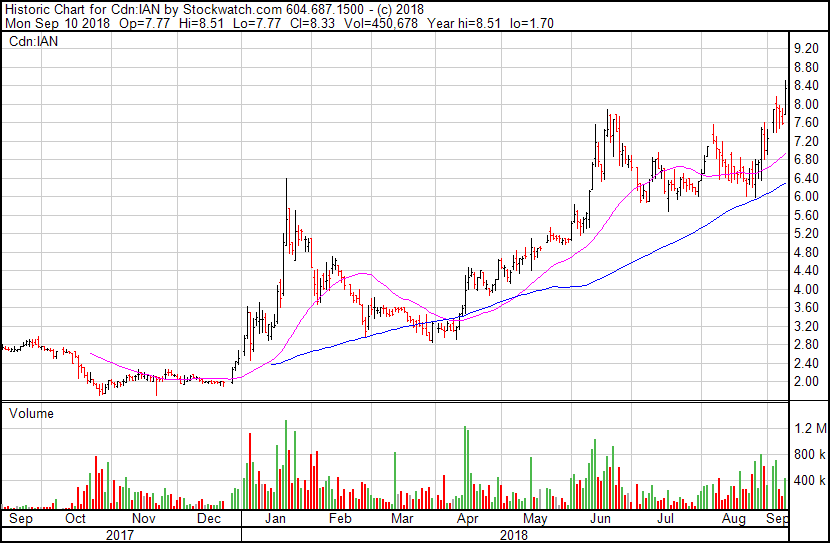 iAnthus’s share price has risen from CAD$2.75 to $8.39 in the span of a year, a rare sight in a market which has seen cannabis companies struggling to stave off downward trends. Here is a breakdown of the company’s American operations by state.

The company does not currently operate any dispensaries, but has secured leases across the state and expects to have three opened before year’s end.

Despite this lack of brick-and-mortar locations, GrowHealthy’s home-delivery sales of medical cannabis began in 2017, delivering $75,000 in revenue for Q2. The company will have a fleet of five delivery vans once retrofits to the three most recently purchased vehicles are complete. 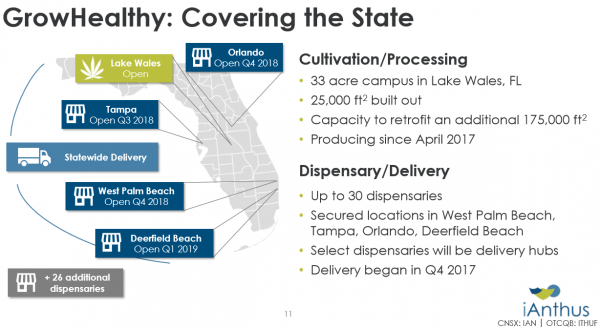 Additionally, GrowHealthy is expanding its analytical capabilities in Florida with its lab build-out:

GrowHealthy is currently in the process of expanding its current 890 square-foot lab space to 15,000 square feet, including a commercial kitchen and increased processing capabilities, allowing for a wider array of products including edibles, metered flower, capsules, and topicals. Construction is expected to be completed in 2019.

Grassroots Vermont is iAnthus’ wholly-owned subsidiary in The Green Mountain State. The company holds one of five medical cannabis licenses in the state and reported just over $180 thousand in revenue for Q2.

iAnthus’ subsidiary operates one dispensary and a 6,900 square foot cultivation and processing facility in the city of Brandon. The company has increased its plant count by 155 percent following upgrades to this facility, bringing production capacity to 200 kilograms annually.

Furthermore, the company has signed a lease for a second retail location. The 2,400 square foot dispensary is located in the most populous county in the state and is currently pending state approval.

iAnthus’ wholly-owned New York subsidiary, Citiva holds one of only 10 medical cannabis licenses in the state.

The company’s Brooklyn dispensary began construction in June and is expected to open in Q4. Located across the street from the Barclays Center, the 2,000 square foot dispensary will be one of three dispensaries to serve the borough’s 2.6 million residents with medical cannabis. 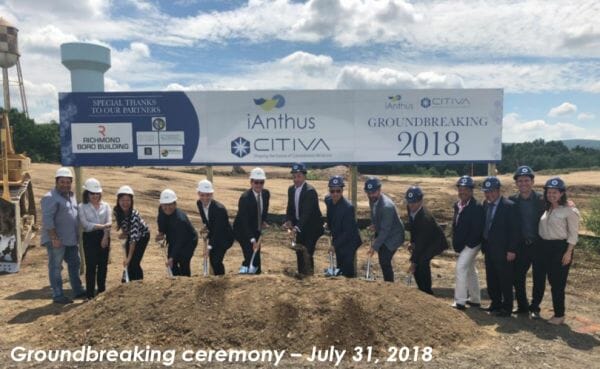 Three other dispensary leases are currently being negotiated in Dutchess County, Chemung County and Staten Island. The Staten Island location, once operational, is expected to be the sole provider of medical cannabis within the entire borough.

iAnthus expects the Staten Island location to open in early 2019, with the  Dutchess County and Chemung County dispensaries to open in Q1 and Q3 2019, respectively.

Additionally, the construction of a cultivation and processing facility in nearby Warwick began late July. Phase one of the facility will deliver 39,500 square feet of cultivation space.

iAnthus’ operations in Massachusetts are headed by its local subsidiary, Mayflower, a former not-for-profit which has since been converted into a for-profit corporation.

The subsidiary’s 36,000 square foot cultivation facility in Holliston completed its first harvest in late April. In June, Mayflower was cultivating over 4,000 cannabis plants with 38 unique strains among them, a 59 percent increase in plant count since the beginning of Q2. 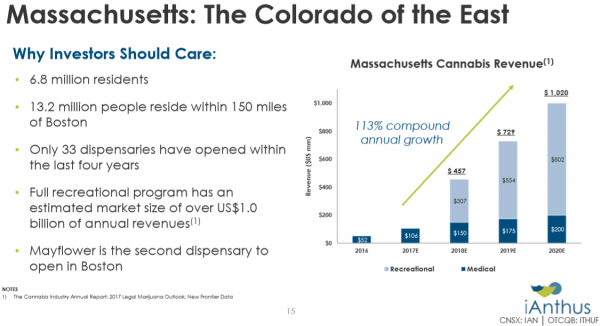 The company launched its home delivery program in June. Mayflower’s Revenues for the quarter totaled $112.

In July, the company’s flagship dispensary in Boston’s Allston-Brighton neighbourhood opened its doors to medical patients.

Mayflower’s second dispensary will be established in Lowell. The company has signed a lease agreement and construction is expected to begin this October.

Located in the popular ski-town of Breckenridge, iAnthus’ subsidiary, Organix, has a “local market share estimated to be greater than 35%.”

State regulatory restrictions prevent iAnthus from releasing the Organix’  financial results for Q2. The company has released broad highlights for the company’s performance during the quarter, however.

Key highlights for Organix in Q2:

Additionally, iAnthus’ investment in Reynold Greenleaf as of June 30, 2018 was $2,412,245. Despite its 25 percent interest, iAnthus has substantial control over the company, per their quarterly report:

the Company has the ability to exercise significant influence over RGA as it has more than 20.0% of the voting interests and can elect two of seven directors to the board of RGA

Despite losing $36 million in the quarter, partially due to the increased payroll expenses associated with expansion, iAnthus is growing revenues in conjunction with its cannabis stores. Stay tuned to Equity Guru for more coverage on the cannabis market.