Consistent with their last six months of moves as a public company, HashChain Technology (KASH.V) has acquired two cryptocurrency mining companies, adding an additional 2,500 Antminer S9 Rigs to its operations across Canada and the US.

“With the closing of the acquisition of 2,500 additional Bitcoin rigs, Hashchain’s mining operations is expected to total 11,995 rigs consuming approximately 17.5 megawatts of power.”

The company acquired all outstanding shares of both companies for an aggregate of 57.4 million HashChain shares at a price of $0.17 per share, the company announced Friday. The combined deals are worth around $9.7m at current pricing.

In addition to the rig purchase, HashChain has executed a July 2018 revolving loan agreement both secured against and related to its cryptocurrency holdings: HashChain can borrow up to 50 percent of its cryptocurrency value at the date of the draw, at annual rates varying from 10% to 18%.

“This loan will allow us the financial flexibility to continue on our strategic path of building upon our inventory of coins and growing our footprint in the cryptocurrency space,” said Patrick Gray, CEO of HashChain.

Documenting HashChain’s tribulations has become a regular occurrence this year. The company reported revenues of $1,029,837 for Q1, but stock prices continue to dip in conjunction with Bitcoin. As of today, HashChain’s stock fell to $0.11. 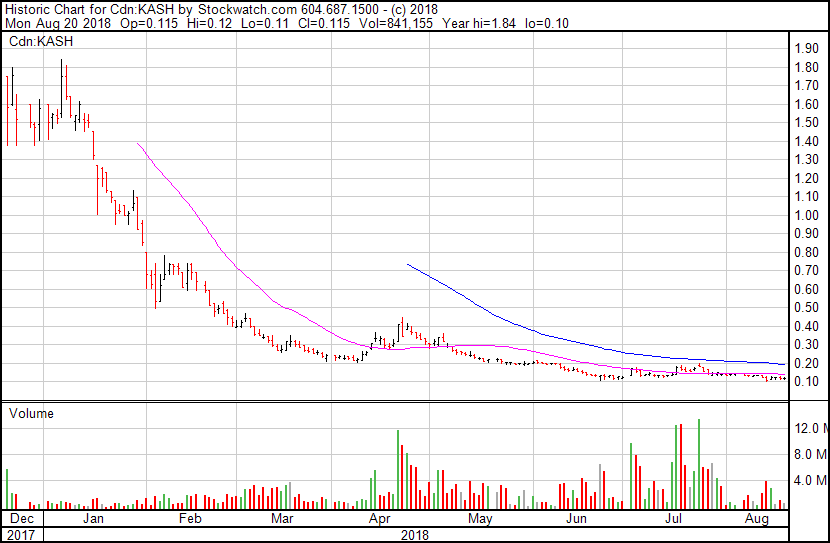 But as Equity Guru’s Chris Parry wrote in April:

Hashchain is helmed by a genuinely affable tech nerd in Patrick Gray, who has been mining crypto currency literally in his garage for a while, after some mega exits from his previous tech startups. His aim is to build out crypto mining capacity at a furious tilt, using networks he already has to acquire the physical server capacity needed, in quick time. Once established across Canada and the US, his data centres will be used to finance what he sees as the real business in a long term sense, which will be software that has yet to be written for industries that have yet to understand they need it, and which will revolutionize how we do business. The mining will be important because it’s actual business with actual revenue, that the market understands. The after-mining will be important because it’ll be infinite upside – eventually.

To that end, HashChain is doing what it needs to do. The company is building out its mining capabilities and securing revenues until blockchain and the market mature into a stage where cryptocurrency is no longer relevant for the company’s sustained growth.

In his piece, Parry does criticize HashChain’s continued use of Antminer S9 rigs, however. Because it is designed to specifically mine Bitcoin, investing in more Antminer S9 rigs leaves one’s operation entirely bound to the continued survival and profitability of Bitcoin.

In January, HashChain acquired NODE40, a company which provides software for simplifying  cryptocurrency and blockchain-based incomes for tax-compliance.

The company was acquired for USD$8 million and 3.14 million HashChain shares. HashChain says NODE40 generated $700 thousand in revenue for 2017, and plans to continue expanding its customer base, last reported at over 2,000.

That being said, HashChain has recently decided to spin out NODE40 and focus the core of its business on mining cryptocurrency.

Whether activity in the crypto space will be enough to keep HashChain afloat in a recently tanking Bitcoin market is yet to be seen.