iAnthus is an Equity Guru client and a sharp, well-structured organization. Their US rollout plan is ambitious. The sort of thing that can only really be carried by companies who have a good leading edge.

Kalcevich outlined the company’s plans to continue expanding its footprint throughout the continental United States market, which they consider to be a region with  an under-served consumer base.

Slide from the iAnthus deck.

One of a few

“As people are starting to want to invest in the US, there’s not many places where they can start putting their dollars,” Kalcevich said.

Because of this, Kalcevich said players in the American cannabis market are racing to establish control over the most populous cannabis-friendly portions of the country: “The US is all about a land grab right now.”

During the question period, Kalcevich said the United States was such an attractive market because of the nature of state involvement. US State regulators are strict, but generally a bit more hands-off than Health Canada. In the rec market, Canadian cannabis companies are most often forced to sell product to the provinces, adding a pre-consumer layer and decreasing margins. Most US states allow for sale direct to dispensaries, or for retailing through a company’s own dispensary.

The company’s investor deck frames the US as a lucrative opportunity due to its size and a relative lack of competition. iAnthus Capital Holdings’ subsidiary, iAnthus East Coast, only faces 14 weighted average competitors in terms of population size per operating license area compared to 114 in Canada. 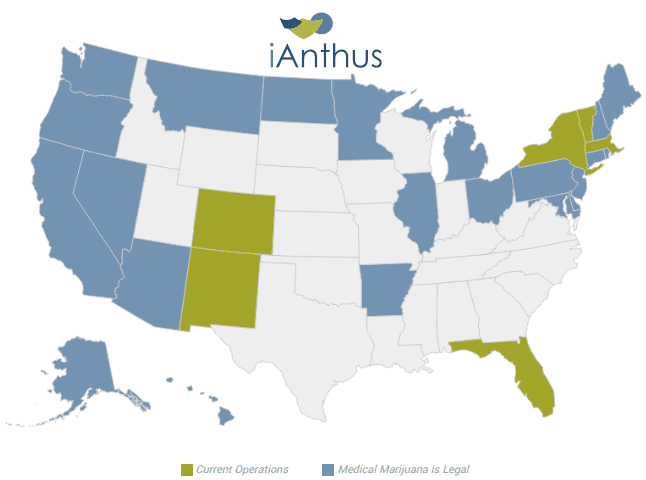 iAnthus is pursuing a strategy that builds up operations in key state markets.

Once fully built out, iAnthus will operate or own interests in 39 dispensaries and four cultivation facilities across Massachusetts, New York, Vermont, Florida and New Mexico. Presently, iAnthus operates one store in Vermont, one in Massachusetts, and one in Colorado. By the end of Q4, they plan to have added two dispensaries in Florida, including a flagship location in South Beach, and three to four more in New York. They have high hopes for the locations Staten Island, and the one in Brooklyn, at a location by Barclay’s Centre. The US census estimates the population of Brooklyn at 2.6 million people. They plan to have completed their cultivation and processing facility in New York State by the first half of 2019.

Establishing a strong presence in the fast-growing Florida market is a top priority, according to Kalcevich. The company’s website lists a 25,000 square foot cultivation and extraction facility in Florida that they plan to build out to 175,000 square feet. Ostensibly, that operation would supply the 30 dispensary licenses the company plans to build out in a mature market. The company told Equity Guru on an introduction call last week that they planned to have 3-4 dispensaries opened in Florida by 2019, including a high-profile location in Miami’s South Beach neighbourhood.

The strategy of establishing toe holds in various states, and vertically integrating where it’s practical and affordable is one that can see sector-rate growth in a market where federal prohibition continues, but see market-leading growth in the event that it is repealed. 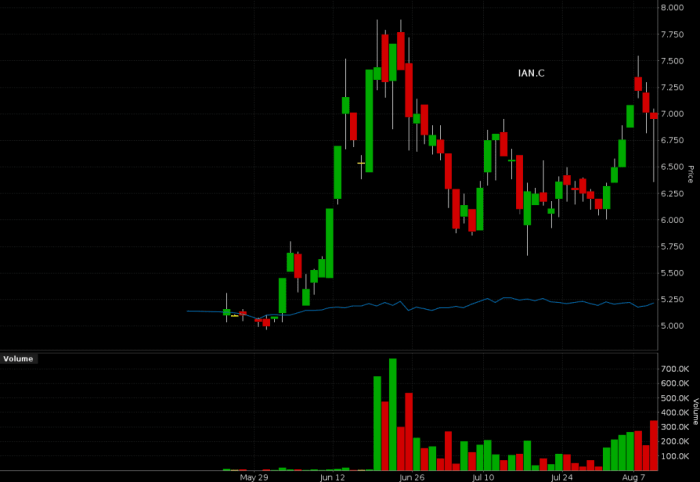 Presently, IAN trades at a $359M market cap, and there aren’t a lot of companies to compare it to. CSE listed Green Thumb Industries (GTII.C) has a similar vertically-integrated, multi-state strategy, but no New York exposure. GTII has plans for 25 Florida dispensary locations, but it’s unclear when they will be rolled out. Green Thumb does not list a cultivation facility in Florida. They currently trade at a $1.4 billion market cap.