Ok, if Not Regular Oil, What About Cannabis Oil? Quadron Cannatech (QCC.C) Bossing the Extraction Market

Quadron Cannatech (QCC.C) is one of our clients I personally have taken a shine to. To my mind, they are a scrappy little can-do company with some nifty proprietary tech on the verge of something bigger. They specialize in extraction technology, using CO2 to pull the valuable essence from cannabis so it can be used in oils, edibles beverages etc.

Best of all, the system is called ‘The BOSS’. I love that. love it.

As noted above I’ve written about Quadron before. Fair disclosure, although I don’t own stock, I have spoken with the CEO and I’m pretty much in their corner.  I think they have a real shot at carving out a real slice of the extaction market, especially for small to medium sized ‘entrepreneurial’ sized operations.

Looking at the Numbers.

Quadron isn’t waiting for the markets to notice what it’s up to. It just sold two of its systems to a grower in B.C. and is aggressively looking for engineering and business talent to expand and grow.

I have a weak spot for hard luck cases – and this stock is not reflecting the potential I see in this company. To wit: 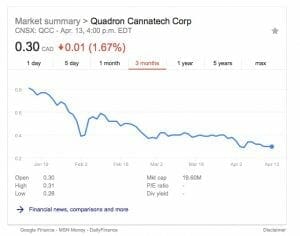 Here’s the thing I think QCC is a victim of the weedpocalypse and the shorting that followed. It’s a company that makes and sells stuff. Its products are going to be valuable and useful to growers and all the different middlemen making cannabis based products.

A million people out there (not a real statistic) are ready to try and make a buck on cannabis, and QCC is ready to sell them the gear going with the dream.

During the gold rushes of 1849-90 up and down the West Coast of North America people were making fortunes. Not the miners… they all worked themselves to death for the most part. The real money was made by hardware merchants, saloon keepers, money changers. They sold the shovels, and the suckers headed for the hills in search of gold.

We’re in a green rush with the looming legalization in Canada inching ever closer. I promise you, a lot of strait-laced people are warming up and getting ready to throw their hat in the ring after July 1.

There will be a wave of small and medium sized operations which will spring up like mushrooms after rain. Most will wither and die. Some will spawn. In the meantime, many of them will need extraction tech – and Quadron Cannatech is ready to deliver.

Of course Quadron Cannatech is our client and I have a bias to be positive. So look at it yourself, if not QCC find other companies who make stuff or have contracts and sales in hand. It’s time to stop gambling on future potential and see who has boots on the ground today.

The team at Quadron have their boots on, and are kicking (Nope. no. nu-uh. this is a terrible cliche. And stop leaving my notes in your published pieces. -Ed.)

FULL DISCLOSURE: I don’t own any QCC stock, but they are a client, and some of the team may.