Oops I Did It Again – Namaste (N.C) trading halted due to late financials.

Oh, Namaste. Why do you do this to yourself? Today, Trading on N.C was halted because the stable genii (Plural for Geniuses, is Geniuses, -Ed.) in management did not in fact put the forms in the mail.

What a ride for this stock. For most of its life it poked along sub-$1 and then in November it took off like an electric powered weasel through a weasel-greasing stoat-launcher. Yesterday’s close was a whopping $3.25 a share. 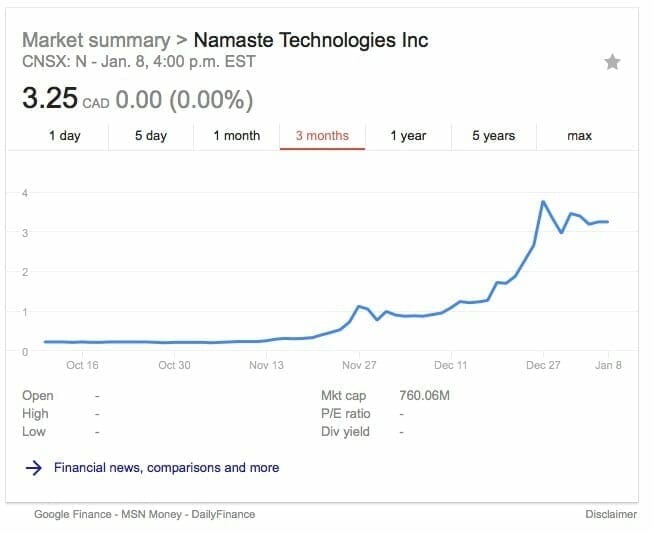 Namaste’s current market cap is just a hair over $600 million. For a two year old company that sells vapes…. and who missed filling their earnings report on time, two years in a row. Pardon my french but Osti c’est stupide.

Namaste  is currently in the cannabis delivery systems business Basically they distribute vaporizers and smoking accessories on the Internet.

They have sites in 26 countries including operations in the UK, US, Canada and Germany and claims to be opening  new supply channels in to emerging markets like Brazil, Mexico and Chile.

More interestingly, they acquired Canmart Inc. who was about to receive an  ACMPR license. Now, the process is still ongoing, but it looks good. The potential may be what started this crazy thrill ride in the last few days.

Someday Namaste may be a big producer or processor, but for now, they’re selling weed tchotkes in an increasingly crowded marketplace.

Namaste’s gonna get it in the shorts tomorrow.

Whatever the reason behind it, the missed earnings report, at 8:31 AM the BCSC ordered a halt to trading. If this crazy spike is the short position being squeezed like ripe tomato, tomorrow’s trading could be pretty wild. If you hold any, look for a lighting fast opportunity to sell high.

Meanwhile, Namaste’s press release is a breathless assurance that everything is fine, fine FINE, why what have you heard?!

Well Sean. it would seem to me that it’s kind of a big deal not to get your earnings reported in time. However, I am not the market. Let’s see what the market says in the morning hmm?

Geez man, here it is, don’t like freak out or anything.

This afternoon Namaste posted its SEDAR and earnings information. Let us dive in shall we. Perhaps there is a reason they wanted to sit on this info?

The more conspiratorially minded among you may say “Hey, Steph, is this crazy run a motivation to sit on earnings, and halt trading intentionally?” and then I would reply “You might very well think that, I couldn’t possibly comment.” Then I would wink. Then I would fleece you, becuse Occam’s razor tells me incompetence beats malice 9 times out of 10.

Here’s the highlights from their release:

This is a fine company, they make stuff, they sell stuff. They will not likely be the AC Delco of weed accessories. Look at the statement on Gross Margin. Of course it’s going to drop. It’s a retail commodity.

In a retail gold rush, the race is to the bottom. on price. What will be valuable will be brands. Namaste still has a horse in that race, but it ain’t worth $3.26 a share.

I can’t put my faith in a company who misses deadlines, then puts typos in it’s official filings two years running. Even if the market says it’s worth more than a small country.