Just bumped into Quadron Cannatech (QCC.C) CEO Rosy Mondin in a downtown food court an hour ago, and had a great conversation (as ever) about all things weed business.

Among the items discussed, her insight that a hybrid govt/private dispensary model appears likely in BC (she’s having provincial government talks next week on this), her preparation for the upcoming Vegas weed convention, that will be filling THREE convention halls this year, and her shiny AF new cannabis extraction unit that appears to be everything QCC has promised it would be – and more.

I asked her what the $1 million financing she just arranged was for. She said, “Parts.”

“We have identified an extremely large-scale market requiring modernized, more efficient and automated processes in the extraction business. Quadron’s recently unveiled BOSS C02 extractor is the most cutting-edge C02 extractor available in the market, highlighted by its simplicity and plug-and-play design. We are already seeing very strong reception and expect our order book to grow rapidly. This financing allows us to build out and deliver on our purchase orders in a fraction of the time of competitors and further market this next-generation machine.”

That’s a swanky piece of equipment. I mean, it’s pretty enough to bring out of the backroom and display in public, which is not something that can be said about ANY other extraction machine currently being used.

Added bonus: It’s plug and play, taking one hour from set-up through training and into full use.

Added bonus: It’s the size of a coffee table.

Added bonus: It takes 4 hours to process bud to oil. NOT THE USUAL TEN.

QCC is manufacturing these machines in a hurry and demand is strong. They’re expecting the conference to bring a load of new orders. They’re also telling competitors to fill their boots when it comes to trying to reverse engineer what they’ve got – “There’s no way they can recreate our tech,” she says.

Brayden Sutton’s Stock Syndicate group ran a piece on the machine today which it would be foolish of me to try to better. It’s a genuinely good write up and covers all the points.

Nothing has been spared in the engineering and design of this CO2 extractor. The BOSS is manufactured with food grade stainless steel, and it’s certified up the ying yang (ASME, CRN, CUL, CSA and UL).

This product is going to sell – I will be surprised if they can keep up with demand after they showcase this gorgeous Cannabis Keurig on Steroids at the Las Vegas MJBiz Conference in mid Nov. (If you are attending, you will find Quadron’s team under the name Soma Lab Scientific at booth #4032).  Yes the BOSS will be there too, so expect a crowded booth.

The yields are similar to other CO2 extractors, but imagine the cost savings with each cycle taking half the time and less energy requirement. Factor in less mechanical issue along the way as well with the engineering and design being at such a high military-level standard.

There are 2 plugs, and it operates off the same power requirements as a clothes dryer (220V).

It’s also one of the reasons QCC is up from $0.195 to $0.24 over the last week, with a big increase in volume. When I asked Rosy if she thinks much about her share price, she shook her head with a big smile. “I don’t want an unjustifiable valuation,” she said. “When actual business matters, we’ll be doing just fine.”

She’s right. Now’s the time to start putting Quadron on your watchlist. It’s cheaper than it should be, but over the last ten days, that’s starting to change. 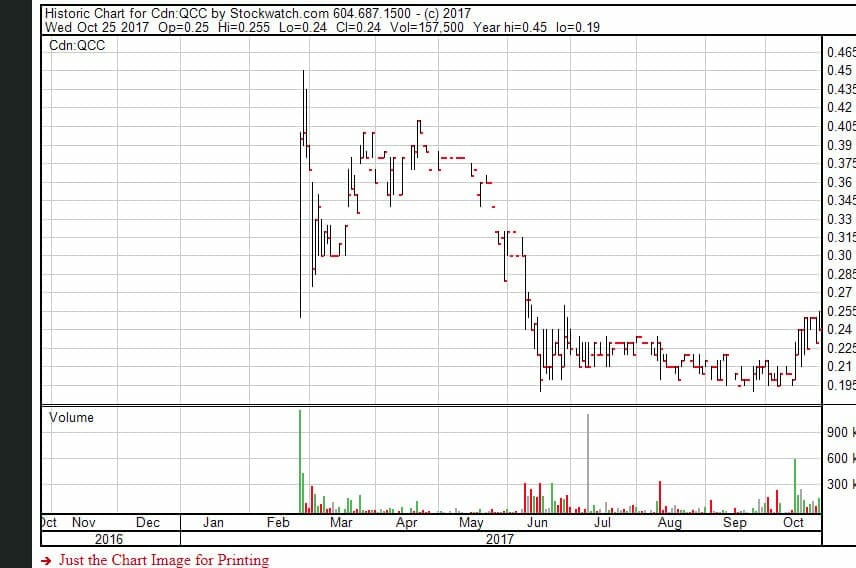 FULL DISCLOSURE: Quadron Cannatech Corp is an Equity.Guru marketing client. The author bought in back when it was a private company, and hasn’t sold a share.