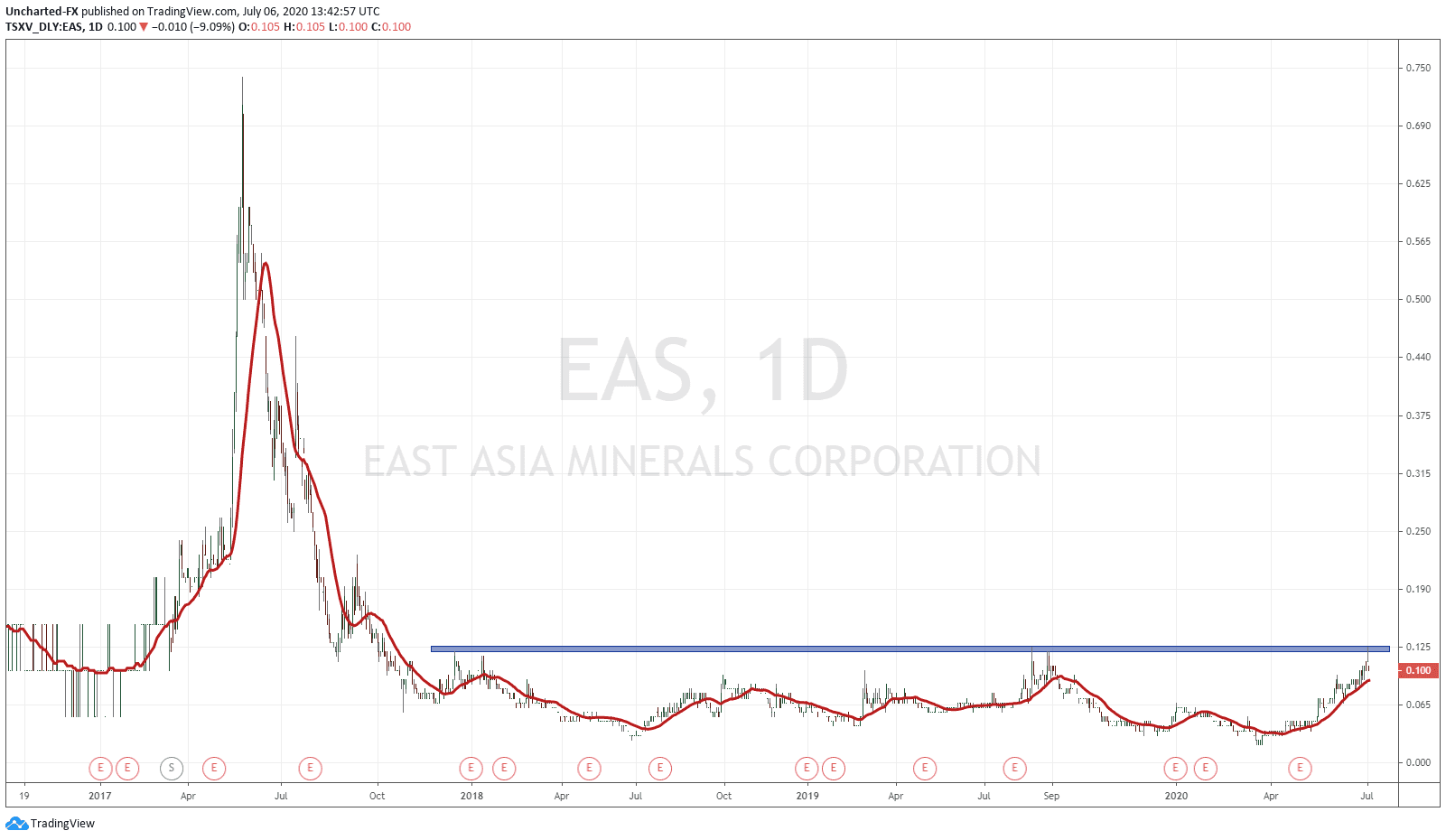 As many of my followers and readers have seen, my market structure strategy outlining the ONLY THREE WAYS ALL markets move can be used to predict market moves in a variety of assets. All of them I argue. Over on the Equity Guru Discord channel, I post charts outlining my approach and strategy for stock indices, commodities and forex. Just allow market structure to develop, and then bounce when we get our signal which usually comes in the form of a reversal pattern with a strong breakout candle. I have used this same approach to trade one of my favourite sectors, the junior mining sector. So far so good. I approach these plays with a bit more patience. Of course I do my research on the fundamentals and make sure the company is cashed up so it can provide a catalyst. Afterwards, I scope the chart out primarily on the daily chart for my entry. There are times when I do not enter for a month or so just because the chart pattern has not given me my entry signal. This is where Marin Katusa’s way of the Alligator comes to mind. I do agree that being patient is very important in trading. Many give in to the fear of missing out (FOMO). If you have FOMO, you have already missed out.

The simple breakdown of my strategy is that market structure is composed of three waves or cycles that ALL assets make: uptrend, range, downtrend. I like my charts to show this clearly. East Asia Minerals (EAS.V) is looking very appealing here. When you zoom out, the chart shows ⅔ market stages very clearly. We have our downtrend, and now we have our base. We have based or ranged since 2017. The longer this range pattern, the larger the pop when we break out. What will be my trigger? A break and close above 0.125. This zone is not purely resistance, but also a flip zone (an area that has been both support and resistance in the past) which makes this zone even more significant. This type of chart pattern is my favourite, and I will be patiently awaiting the break.

Just a reminder, for those who attended the Vancouver Resource Investment Conference this year back in January, you saw my Gold charts indicating further upside. It was this exact same pattern I was highlighting for both Gold and the GDX. 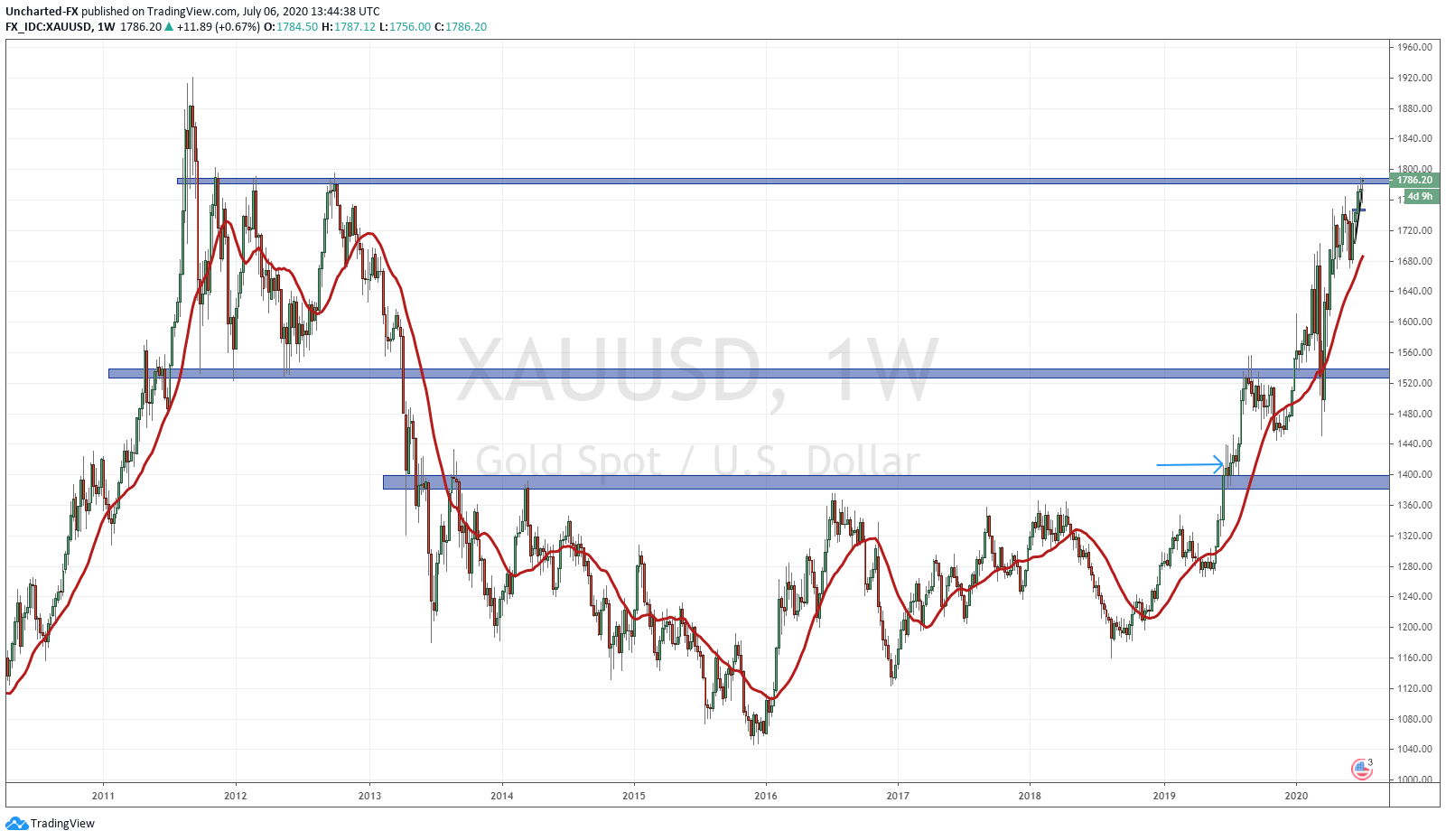 Gold had a downtrend and then ranged since 2013! The breakout occurred (indicated by the arrow) which got me excited for the Gold rally ahead. Market Structure was telling us that Gold was ready to be in an uptrend with multiple higher lows. At the conference, Gold had touched 1530 before dropping. I reassured the executives of mining companies that this is just a pullback forming a higher low. Just applying market structure indicates that trends do not move in straight lines, they form higher lows in an uptrend and lower highs in a downtrend. Our job is just to notice when a trend is shifting and we ride the wave. 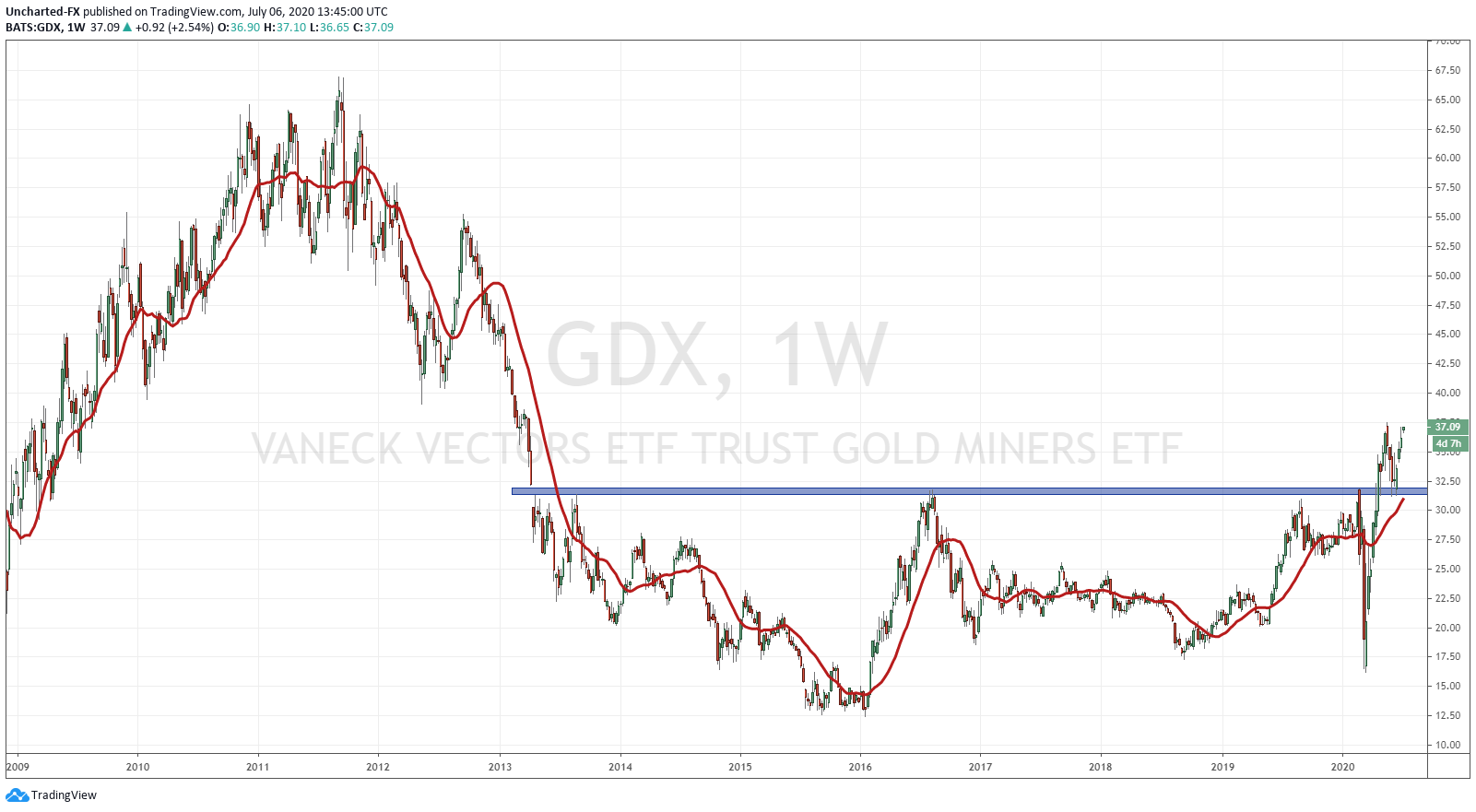 GDX also had a similar downtrend to range/basing pattern. GDX was also basing since 2013 and we got the breakout just this year! Members on the Discord channel were notified of this, and readers on Equity Guru too of course. Truly an exciting time for the miners and as long as the GDX stays above 31.75, we are STILL in an uptrend. Notice how we pulled back to retest the breakout and so far so good. We have NOT yet made our first higher low though, and this will be confirmed once we break and close above 37.50. We should expect multiple higher lows in this uptrend so there is plenty of room to go.

So now I can hear some saying is it possible to enter EAS.V earlier due to the fundamentals. Absolutely. I am just more of a technical guy so I like to follow my rules and criteria that have worked for me. This is why I prefer to breakout to confirm my entry. Our writers here at Equity Guru have covered the East Asia Minerals story quite thoroughly.

You can read  more about the fundamentals and management which was covered by our esteemed writers here and here. I will be highlighting data points from those articles.

It is an Indonesia story…and yes I know many think of Bre-X immediately, but many do not know that Indonesia actually is climbing the charts on the Fraser Institute’s mining jurisdictions report beating out 5 Canadian Provinces. Indonesia is home to tier-1 deposits, the most famous being Freeport-Mcmoran’s Grasberg mine which is the largest Gold and second largest Copper mine in the world. 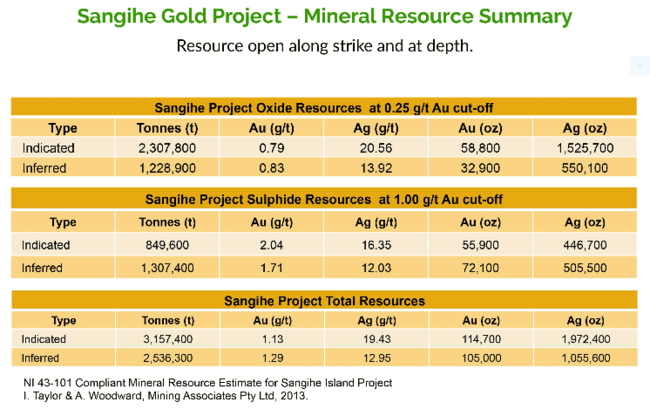 The two Gold projects are Miwah and Sangihe. I will be highlighting the Sangihe project.

This 42,000 hectare land package consists of three main areas of interest: the Bawone and Binebase prospects on the eastern part of the island, and the Taware prospect to the south.

The company has its sights set on a modest heap leach production scenario at Sangihe. We should see the first gold pour within 6 months of government approval.

Stage one will see 1,000 ounces of gold per month when the production plant is fully operational (roughly 12 months from gov’t approval and project funding). Estimated all in costs = approx $700 per ounce. This will throw off free cashflow of roughly $1,100 per ounce, or $1,100,000 per month once in Stage one (based on current spot Gold prices).

The goal is to self-fund exploration and add to the ounce count.

On that note, the company anticipates three phases of exploration:

– phase one drilling campaign to upgrade the 835,000 Inferred ounces along the Binebase-Bawone Corridor;

-phase two drilling program to test the mineralization potential from Bawone to the south of Salurang;

In terms of major upcoming catalyst, East Asia expects to receive its production license from the Indonesian government after completing the ‘Environmental Presentation and Permit‘ (AMDAL). This permit can be the catalyst that gives us the breakout of the range and establish a new uptrend. As they say, the longer the base the higher in space.