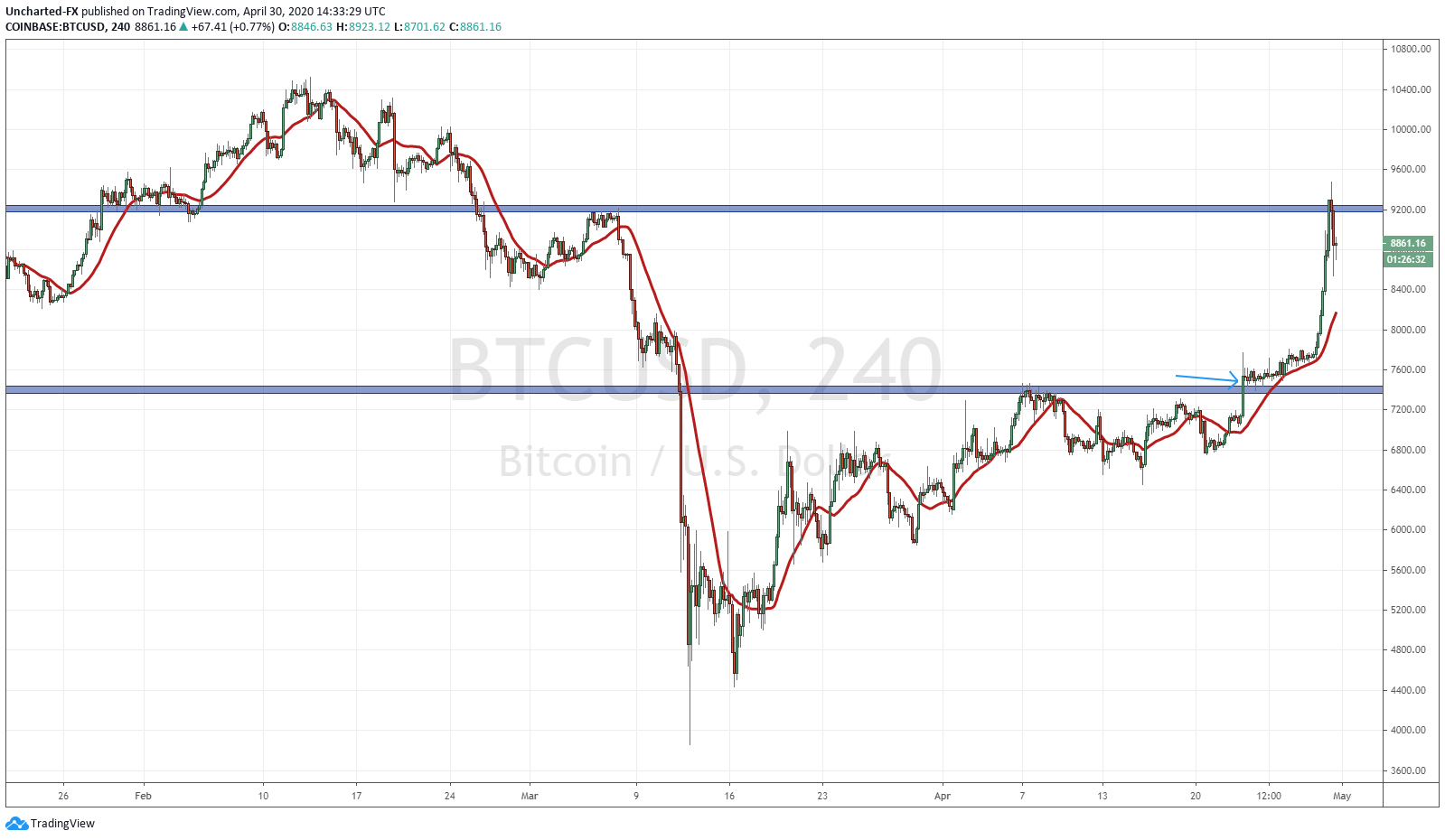 We have been watching the Bitcoin chart these past few weeks and last week over on the discord channel I spoke about the breakout which occurred. This zone that we broke out of was new highs on the 4 hour chart, but also was a very important zone on the daily chart. The daily chart almost formed a somewhat dirty looking cup and handle. However, the pattern does not have to be textbook, they rarely are. What the pattern tells us is the confirmation of a higher low swing on the breakout, which is what we got, and that because of this, we are in an uptrend.

After the break, which occurred on a Thursday, we warned about how over the weekend (since crypto markets are open 24/7), price could stall and it is best to see if any momentum is gained on Monday. Look what happened. We ranged above the breakout zone for nearly 4 days with no continued momentum… not really what you want to see after a breakout. However, many of the crypto traders said this is normal. Generally, Bitcoin does range a lot after breakouts and before making large moves. Once you continue trading and gain experience from looking at charts, you begin to realize different charts do have different characteristics. It is tough to explain, but it is almost like a sixth sense that is developed.

Bitcoin did indeed continue its move afterwards. If you were not in a position, it is recommended to get in once the retest is confirmed, which requires a break and close into recent highs. The run up was explosive. Our target was the flip zone (an area that has been both support and resistance) at 9200 but could go up to 9500, and we hit it.

What now? From here, we are still expecting a possible second higher low swing, meaning we pullback before breaking above the recent highs at 9470ish. This is just market structure and maintains the uptrend, but the play is triggered only once it confirms the swings by breaking above the aforementioned price. There is the large 10,000 psychological number that will be key. A lot of eyes will be there.

In terms of the fundamentals, this is Bitcoins real recession/depression around the corner test. Nobody knows how cryptos will act during these time periods, but if it is a store of value and a safety play, the digital gold as many crypto bulls say, then we should be continuing higher. My thoughts are that a government digital currency will be announced. That would be bullish for the private cryptos but how long will you have to take profits before governments come down hard on them?

And of course, we have the halving which is coming up in May. It is a way to prevent inflation where currently, miners are rewarded 12.5 per block mined. The rewards are halved every few years to keep a lid on inflation. By May 2020, the reward per miner will be cut in half again, to 6.25 new bitcoin. This technically will reduce the new supply of Bitcoin coming into the market and occurs every 4 years. As someone who studies classical economics, this reduction in supply is a way to increase the price of the currency BUT ONLY if certain demand criteria are met. If supply decreases, and demand also decreases, you will not get the higher prices. Prices will remain largely unchanged. How Bitcoin reacts to the halving is anyone’s guess. Be sure to take a look at our Crypto articles here on Equity Guru to keep up to date with the halving and crypto equity moves.