There have always been rumours. Shrugs. Frowns. Long, drawn breaths. Admission that they were smart, hard working, but….

On stage at the Cambridge House Extraordinary Future show a few months back, as part of my ‘Gauntlet’ event, where I gave six CEOs a public roughing up, I asked Ascent Industries (ASNT.C) CEO Philip Campbell ‘What took you so long’ in getting your cannabis licence?

When I asked the question, I got a look from him, picked up clearly by the cameras, as if to say, ‘oh bruh, you gonna do me like that?’

His answer was very honest. Security clearance issues. A government that didn’t like the old MMAR program and those taking part in it. They were “not making any progress so decided to look at other opportunities for our business.”

“In honesty, the reason that we were held up in security clearance is we had some experience operating in the previous licencing system that Health Canada has established.”

You can catch it for yourself here:

That’s about as much as we’re likely to hear about the ‘why’ Ascent was notified by Health Canada that the regulators of Canada’s cannabis industry aim to revoke the company’s grow and dealers licence, at least in the short term.

This news was released today, and it’s not pretty.

Health Canada has advised the responses were not satisfactory to lift the suspension and has issued a letter to Ascent that it intends to revoke Agrima’s licences. In turn, the company intends to exercise its right to be heard under the Cannabis Act and Cannabis Regulations in order to maintain its licences. Should the company not be successful in this hearing process, the licences could be revoked.

Health Canada’s review is focused on the period during which the company was privately held. Health Canada asserts that unauthorized activities with cannabis took place under the company’s ACMPR (Access to Cannabis for Medical Purposes Regulations) licence during this period.

The situation has already cost Campbell, and Reid Parr and James Poelzer their jobs at the company and, likely, their ability to work in the sector in Canada.

And the news shredded ASNT stock, as you’d predict it would. 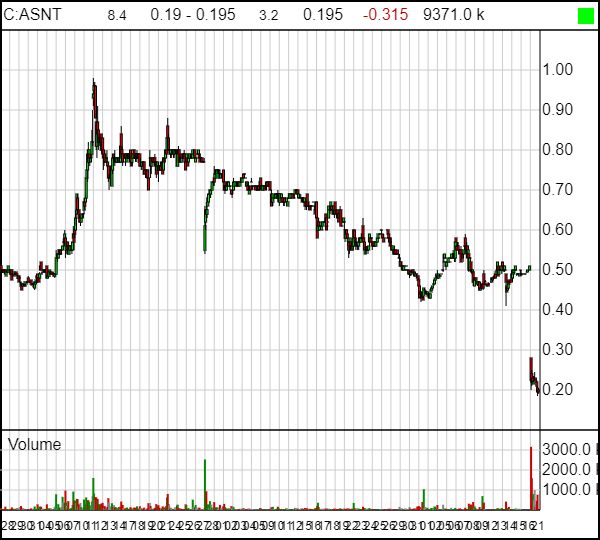 There’s no way to look on the bright side of this, other than to say it probably needed to happen. For too long, potential partners and even acquirers have enjoyed what Campbell, Parr and Poelzer have built, but been concerned about what might lie underneath. The stutter-step around their security clearance hadn’t been something they’d been able to shake.

And, frankly, rumours multiply, especially as a market cap grows. I’d certainly heard them, but when the company received its grow licence, and then it’s dealer’s licence, it appeared any penance that was to be paid for perceived transgressions in the early days had already been ponied up.

Perhaps not. Eventually, the rumours clearly got loud enough that they made it back to Health Canada, and the resignation of the founding three suggests there’s a better path for the company in seeing them off than trying to prove the allegations spurious.

SO WHERE TO FROM HERE?

As I see it, there are four paths forward, and none of them are great – but the strong likelihood is, ASNT will carry on from here.

Option 1: Fight it in a tribunal hearing and win, likely by showing that the transgressors are gone and the company proper is ready to rehab. If that’s successful, I can’t see Health Canada restoring those licences for many months, after the company has proved itself clean over a long period.

Option 2: Sell the Canadian facilities entirely to a company that will have little trouble re-licencing them. After all, Health Canada appears to take no issue with the facilities, just the people running them over the last few years. I’d be shocked if the company isn’t already fielding calls on this matter from potential buyers. That would leave the company focused on global operations, of which they have several.

Option 3: Shut the BC facilities, sell the pieces at home and overseas, and liquidate.

Option 4: Sell the entire company, which might not even be an option management chooses for themselves. As the share price of ASNT hits $0.20, the market cap lingers at a very tasty $50.4m right now. A takeover offer might not even need to be at a premium to be successful, considering the situation they’re in.

It’s a sad day, either way. The founders are good guys, and ridiculously smart. They’ve put years of their lives, and their heart and soul into making it a thing.

I’m talking to the interim CEO in a few hours and will update accordingly. For now, thoughts and prayers.