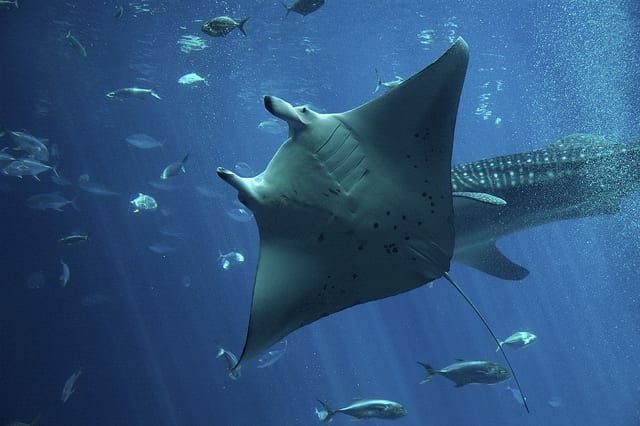 Everything you’ve ever wanted to know about Tilray, but were afraid to ask: part of our ongoing Marijuana Datajam series about the numbers behind cannabis equities.

Seattle based cannabis cultivator Tilray Inc. (TLRY.Q) became an instant giant of the cannabis sector Thursday, raising $153 million USD in the NASDAQ’s first cannabis IPO, a listing of 75 million of class B shares. We usually don’t pay too much attention to hourly trading, but the early Tilray hours were showing us something.

(All Tiray figures USD, except comparison charts, which are CAD) 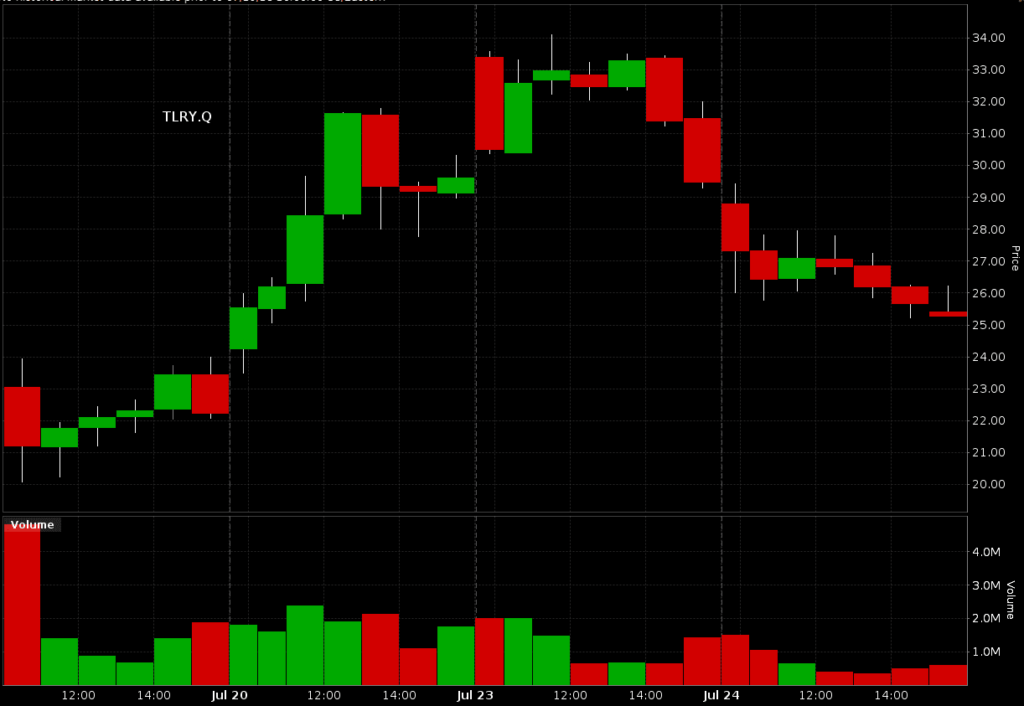 Since TLRY did twice its float in volume over 4 trading days, it’s reasonable to wonder how much of the opening Tilray action was money coming out of the big-cap cannabis to coast on the momentum of the new issue. 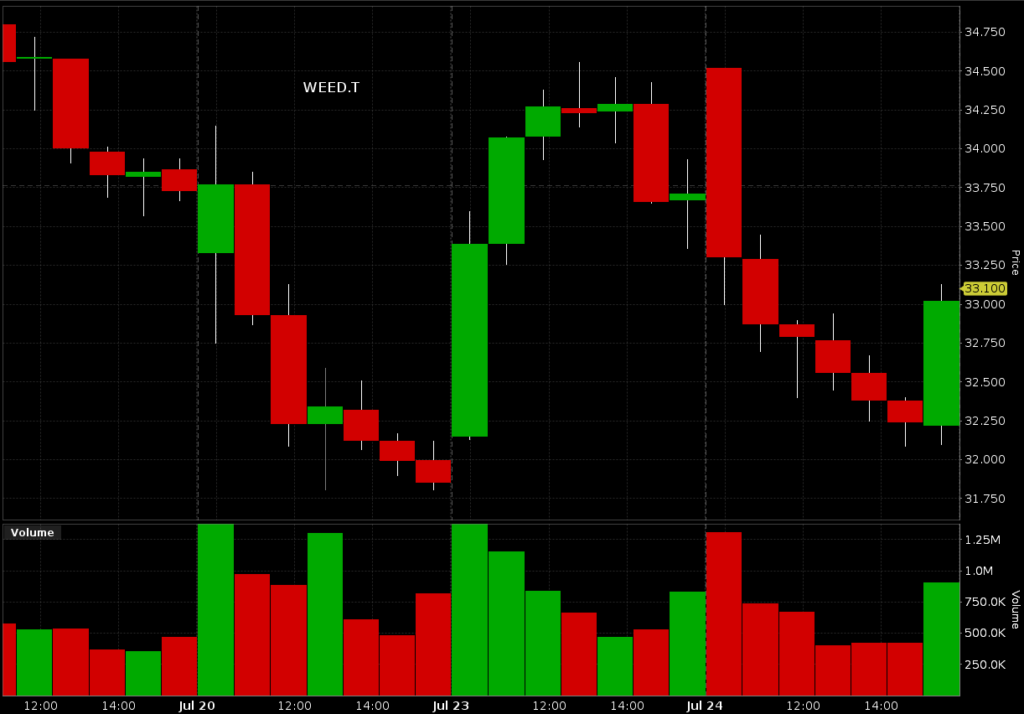 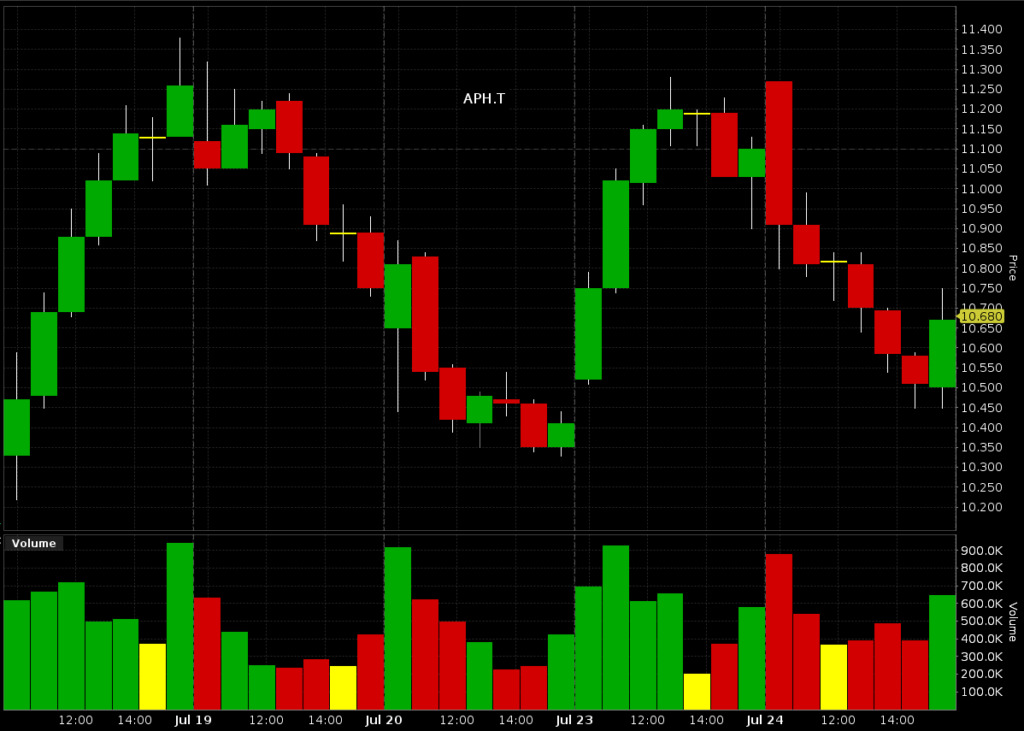 Both Aphria and Canopy look like they had some price action and momentum robbed in the early hours before they got back on track. Expect to see Tilray trade in the same general shape as Canopy and Aphria, and for all three to outperform their peers and the index as we move towards Canadian Retail D-Day in October.

For now, Tilray’s B-share NASDAQ listing is averaging 9 million shares a day in volume and carving out a $2.5 billion market cap as the market gets a feel for the value of a non-controllable, US-listed pot company whose operations are in Canada.

The 75 million Tilray B shares that went public Thursday are each worth 1/10th the vote of the 16.6 million A shares that are still retained by the founders. Those shares are controlled by Privateer Holdings, a Seattle based equity fund run by Tilray’s CEO Brendan Kennedy. By virtue of control of those shares and 58,333,333 of the listed B shares, Privateer Holdings controls 93% of the Tilray voting power. They controlled 100% of the voting power until Thursday, when they floated 7% of the votes and 78% of the equity on the NASDAQ and came up with $150 million + in additional working capital, and a $2.5 billion valuation. Now they have to figure out what to do with it all.

What they have & what they’re building

Privateer had financed the buildout of Tilray’s BC and Ontario processing facilities with a shareholder’s loan, so they’ll take back the principal and interest ($37 million), and use the rest to continue expansion on all sites, and to build one in Portugal. Tilray has a clean balance sheet. They generated $7.8 million USD revenue last quarter (ending in March ’18), for a gross profit of $3.9 million USD.

Tilray currently operates a 60,000 sq/ft growing facility in Nanaimo, BC, that is being used to supply the medical market. They’re building a 566,000 sq/ft greenhouse Enniskillen, Ontario, and a 56,000 square feet of processing facility in London, ON that is to produce for the retail market, once it’s all been Health Canada approved.

That adds up to 912,000 sq/ft of licensed facility space by the end of 2018, when the company says they will be fully expanded.

In broad strokes, the company will grow their own product at those three locations and supply medical and recreational markets in Canada and in Europe, as laws allow. They’re already supplying the Canadian medical market with all manner of bud and high-potency medical extracts, including a 2:100 CBD:THC extract that goes for $400USD a bottle, when they have it in stock(it’s currently unavailable).

The company has a subsidiary called High Park built to handle retail supply. We have it on good authority that the company has hired experienced sales managers and reps, who are laying the groundwork for retail sales in Canada. We consider quality of sales forces to be a defining factor in a company’s ability to gain a share of the Canadian adult use market. This has the feel of a well-backed, high-efficiency, large operation capable of just out-muscling competitors for shelf and counter space.

The under-construction Tilray Portugal is meant to be a base of operations for export to EU countries. Presently, they’re exporting to a veritable United Nations of countries through distributor agreements, and have are working on a few in a few more countries. From the Tilray offering prospectus:

Elsewhere around the world, we have agreements with distributors in Argentina, Australia, Brazil, Chile, Croatia, Cyprus, the Czech Republic, New Zealand and South Africa, pursuant to which we are currently selling our products. We also have agreements in place with distributors in Brazil, Peru, Poland and Denmark, though our products are not currently available in these countries.

Is this the secret to growth efficiency?

The desk that this is being written at gets buried every morning in press releases from public cannabis companies designed to make as loud a noise as possible about supply agreements they’re going to sign, branding strategies they’re undertaking and unique partnerships with the largest pharmacy chain in Bulgaria.

In that context, I’m inclined to think the big story in Tilray is the efficiency of private capital. Pubcos have to go through the process of building facilities, getting them licensed, and establishing markets for their products in public. Keeping shareholders happy, maintaining equity performance, going through reporting every three months and all of the other necessary busywork that comes with it takes time, attention, and human capital. We’ve spent the better part of a year watching pubcos make sure that every move they make gets a good look, and choosing their moves based on how good they’ll look. There were quite a few companies checking themselves out in the mirror, because if the market thought they were ugly, they wouln’t be able to finance. Meanwhile, Tilray was eating their lunch.

We’ll dispense with our usual hand wringing about how loony it is for a company to be trading at hundreds of times forward sales, and sixty times book, because all cannabis companies are doing that. These things have to be looked at relatively.

We continue to believe that the best way to measure a weed selling company is by how much weed they sell. The discussion in the Tilray prospectus only provides grams sold figures for Q1 2018, Q1 2017 and the year ending Dec. 31, 2017. Let’s have a look at how they did in Q1, relative to their peers. 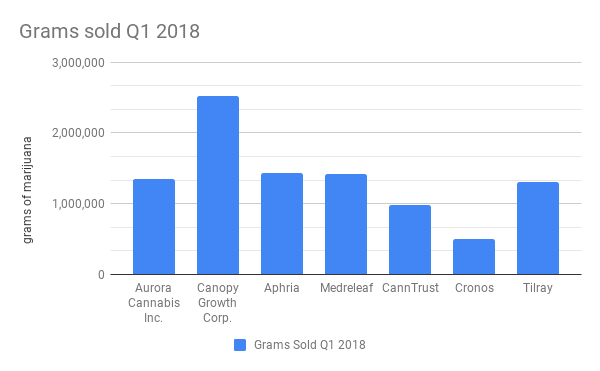 Respectable. With only one quarter, we can’t measure growth, but let’s take a look at how well they’re using their space: 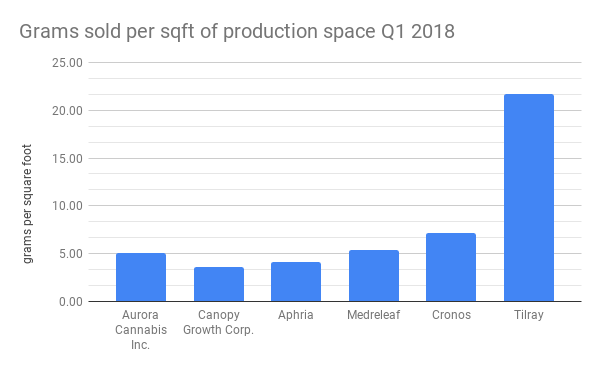 Decent. The trouble with these is that you never can tell how much of the sales are actually home grown product. We took Canntrust off this chart, because we couldn’t verify how much of their sales were grown in house. Aurora’s gram per squarer foot metric has been adjusted to include only the grams sold that they grew themselves. Canopy outsources its Craftgrow line. They tell us it amounts to less than 5% of unit sales, so we left their efficiency score alone.

Tilray appears to grow all of its own product, and we made this chart under the assumption that all of the grams sold in Q1 2018 were grown in that 60,000 sqft Nanaimo facility. TLRY made better use of its active space than its peers did in the most recent period. It should be noted that MedreLeaf led the pack with more than 20 g/sqft, before they opened a facility that gave them 5x the square feet a year ago, blowing up their denominator and chopping their ratio.

File this one away. It’s reasonable to value the space a company is going to build based on the efficiency of the facility they’ve already built, but this market isn’t rating efficiency just now. It wants product.

Companies who push their way into the top of high-volume growth markets like this cannabis space don’t need big promotions. The US listing will get TLRY all of the analyst attention they need. The US institutional investor class haven’t even touched the cannabis space in any meaningful way. When they do, we expect that NYSE listed Canopy will be the leading brand, and Tilray and Aphria to be the head-picks, for brokers who want to tell their clients that “this company is what Canopy was a year ago,” without having to look anything up.

Special thanks to contributor Taylor Gavinchuk, who did most of the leg work on this one.

The Last of Barrett’s Privateers is a song by Stan Rogers.