Remember back a few weeks ago when ‘the big three’ were making their big moves in weed and HIVE Blockchain (HIVE.V) was making multiples every day in crypto / blockchain and the whole world was jumping all over them and making down payments on Rolls Royces?

We’ve since gone through ‘the catch up’, when every other smallcap player has their own ridicu-day and every single person invested in the market took a moment to ponder how smart they are.

Today we sauntered into ‘the crazies’, when the market looked for whatever was cheap so it could make the biggest possible profit on the inevitable market upswing.

BAM! Up goes Matica Enterprises (MMJ.C), the collector of nearly licensed weed grows, which I was getting shit for telling people might be a ‘safe place to park your money’ when it was at $0.10 (up from $0.05). 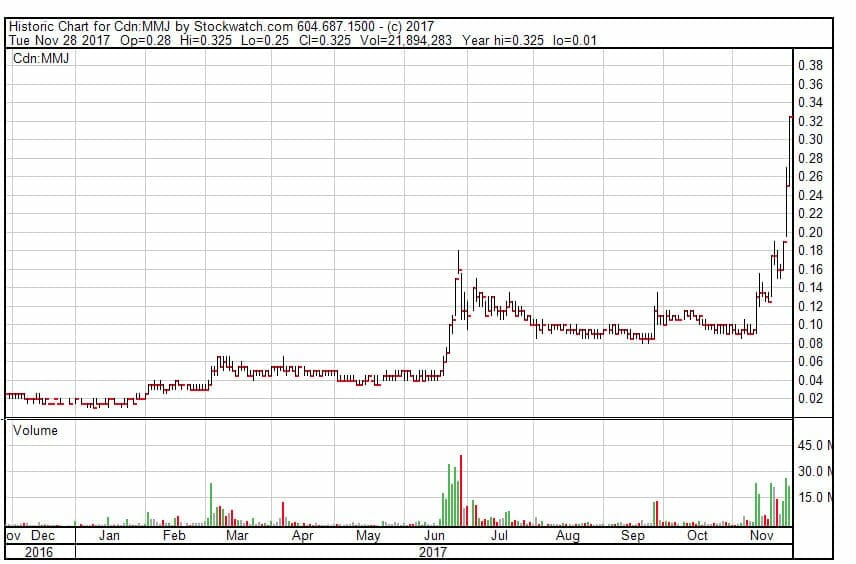 Jeepers. And to think, I sold my 1.5c options at 10c and thought I’d done well. Congrats to those who stuck with Matica and defied the naysayers.

Also, big ups for Golden Leaf Holdings (GLH.C) bulls, who held firm as the company worked through bad debt and changes of execs and short sellers down into the mid-teens, only to hit $0.50 today before settling at $0.465 on the back of news that one of their investments got a grow license in Canada.

This shouldn’t have been news to anyone, as the company announced this deal back in March, and Health Canada’s website updated the company as a licensee on Friday.

But hey, in a bull market, it takes time for word to get out, I guess.

MMGC represents a strategic acquisition for Golden Leaf and provides key benefits to the Company, including:

It should be noted that the outgoing CEO, Don Robinson, announced this deal and the market farted in his general direction. Now the company has its licensing, that move is looking like a belated win for the former head honcho.

Naysayers have been quick to point out that Medical Marijuana Group (MMG) is ‘only’ sitting on 6k sq. ft. of grow space, but most growers have started in around that level as they get their facility rolling. Even the giant Aurora Cannabis (ACB.T) ‘only’ has 55k sq. ft of growing space currently, with 800k + on the build side coming on.

Even more important: The dollar value of a Canadian cultivation license is considerable, as can be seen in GLH’s quick stock doubling since the news, from $0.225 last Friday to $0.465 at close today.

“Receiving this license represents a landmark step for Golden Leaf, as it will provide entry into what we expect will be a burgeoning Canadian cannabis market in 2018,” commented Mr. William Simpson, Chief Executive Officer of the Company. “Expanding into emerging growth markets such as Canada will enable Golden Leaf to leverage its expertise and experience in the oil extraction and edibles markets to achieve a significant market presence as Canada’s recreational cannabis market evolves. We are confident that the combination of our established Golden and Chalice Farms brands will position MMG as a market leader.”

The company will be putting out its third quarter earnings call after close of trading tomorrow. For those interested:

Namaste (N.C) has also been on a tear, which we feel has been justified as the company had long been undervalued – but $0.225 to $1.40 in a few weeks is crazy. Though the stock settled to $1.05 by the end of the day, and the company has legitimately taken advantage of the bull market by putting out a lot of news on small deals, we struggle big time with a $212 million valuation on an e-commerce vape play, even if it’s the best one around. 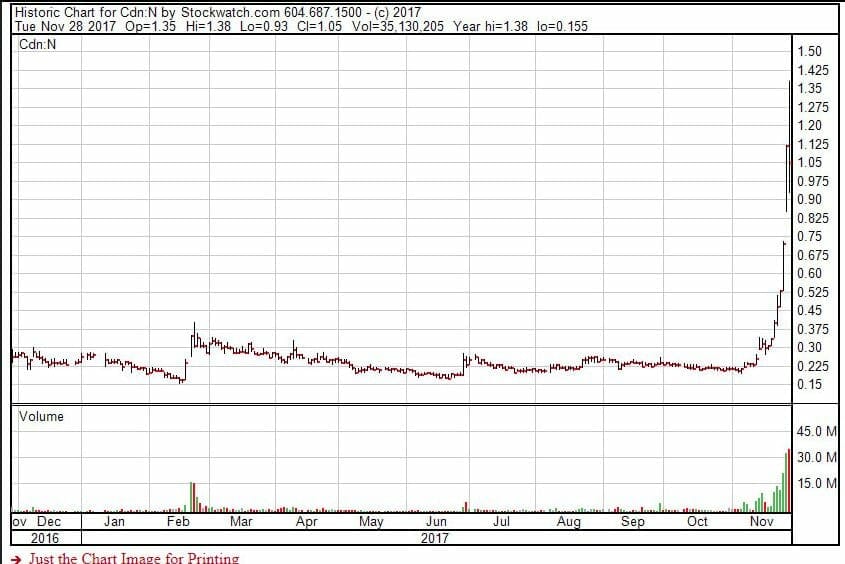 Now, if these charts look like insanity to you, don’t victimize these companies for that. Every company in the weed space, crypto space, and a lot in the health and mining spaces right now are looking very similar.

Abcann Global (ABCN.V) doubled this month after it locked in its $30m debenture financing and announced it was looking for things to buy.

Aurora has moved from $3 to $8.25 this month and is in pitched battle with short sellers (and winning). A $115m financing puts it in a strong place to continue its barbarian battle with Cannimed (CMED.T), who are also popping as they adopt a shareholder rights plan.

The company is very concerned that by secretly obtaining lock-up agreements from four of CanniMed’s shareholders, Aurora may be depriving shareholders of their ability to vote in respect of the Newstrike deal or may coerce them to accept the hostile bid. By adopting the plan, the company hopes to ensure that shareholders are afforded the opportunity to make an informed decision when deciding how to vote for the Newstrike deal and whether to tender to the hostile bid, among other things.

DOJA Cannabis (DOJA.C) is on a big run, though one that looks a lot more sensible than most, shifting to $1.26. Company insiders were buying at $0.54 and $0.59, when I was calling it undervalued and you knuckleheads were hemming and hawing. Not only will they have made money on the go-public deal, but they’ve doubled their investments in the company in the time since. Well played, Kitsch folk.

Remember Canabo Medical (CMM.C)? The clinic operator with a big bet on clinical trials and big data hauling of patient records has more than doubled since early October, leading it to announce a share buyback program. The company is also cash flow positive as of last week.

Cannabix (BLO.C) was one of the first companies to truly leave planet sanity with its share price, running from $0.60 to $2.50 in less than the time it takes to blow into a breathalyzer, but the cannabis breathalyzer developer (we’re still waiting for proof it works), found the edge of the cliff quickly. A quick raise at a $1.15 was well played from the company perspective, and from those who managed to get in on the deal, but with the stock now drifting down from $2+ to $1.45, participants will be hoping the prevailing sense of market anti-gravity turns the thing around soon.

One company that HASN’T FRICKING MOVED through all this Willy Wonka jiggery-floatery is International Cannabis Corporation (ICC.V).

Look, I’ve never thought much of the ICC business model (growing in a place where the top end of the retail price is held at a buck per gram), but they just raised $23m, and if they used that to bust out of the developing world, their $113m market cap may come closer to realistic.

In a sensible market, you don’t touch ICC with a fetid goat, but in a market where Namaste’s market cap has passed ICC, it starts to look like a value pick – even if only a short term one. 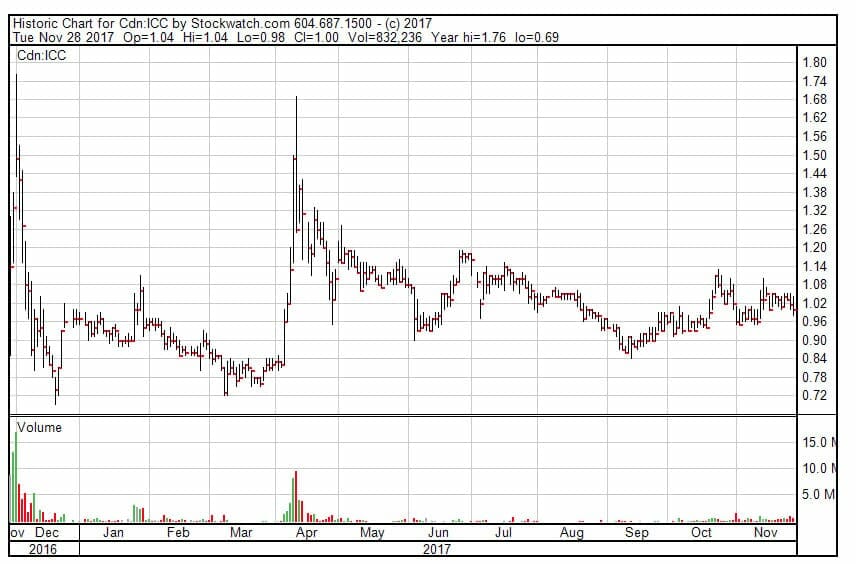 People, that company has missed the run, which makes it one where value seekers may start parking soon.

Another value pick, for mine, is Supreme Pharmaceuticals (FIRE.V), which I should probably not say publicly because el cheapo CEO John ‘T-1000’ Fowler has never spent a dime on marketing to investors, let along through yours truly, but I’ve also never lost money buying Supreme stock, from $0.16 on up.

The current market cap is fair based on what they own, and even more fair when one considers the level of cash sitting in their bank accounts.

I maintain Supreme has the dough to make a run at a bigger player, or at the least a handful of smaller players. With $100m or so in the treasury, and their stock worth increasingly more in an up market, Supreme WILL come take someone out, I’d bet my ass on it.

Speaking of Organigram (OGI.V), there are still a lot of people who won’t touch that thing while it has lawsuits looming and Captain Fillmypockets in the boardroom, and with the team that made it happen in the first place now spread across Abcann, Emblem (EMC.V), and the upcoming Green Organic Dutchman (TGOD) market debut, there’s nobody in house swinging the big bat anymore.

Sure, Organigram is up, but barley up much higher than it was in April of this year, and lower than it was in late 2016 before it was revealed that the company was splashing around pesticide like it was Drakkar Noir at the Roxy on a Friday.

Organigram is working on a $50m bought deal with Eight Capital, for $3.50 a share, which is almost exactly the current market price.

Make no mistake – this is not acquisition money. The company says it will use the cash to expand out to 429k sq. ft of grow space, which is not far more than Supreme has before it even flexs a bicep. The two companies have matching $400m market caps, but OGI is spending its money to look like a more attractive target, while Supreme is hoarding its cash so it can go find something pretty.

The potential hurdle to a deal? Previous OGI deals have reportedly been scuppered by the former CEO’s desire to be made wealthier than everyone else, and he’s still sitting in that corner suite. Also, lawsuits. Also, our look at OGI’s grow numbers indicate their yield is fakakta.

Lifestyle Delivery Systems (LDS.C) went on a bit of a run when Equity.Guru’s Lukas Kane visited their facility and shot video of their machinery.

The company lifted hard in the days following the story, more than doubling before settling in back at a healthy $0.66. We like the company at that price because it’s right in line with the price of an LDS share back in June, in February, and back last November, even though the company has moved hard in a positive capacity towards actual production.

After announcing it would develop a 202k sq. ft. grow facility for its own uses, the stock went the opposite way to how you’d expect, which suggests this is a bit of a Moneyball pick at the moment. As the market caps of comparables fly, there’s going to be a lot of eyeballs on LDS.

Lots of talk that Friday Night Inc (TGIF.C) and Deploy Technologies/BAM may be talking ‘do you like me or like like me’. Haven’t been able to confirm but heard from multiple folks.

Lastly, Tinley Beverage (TNY.C) continues to grow as it gets closer to its expected January 2018 de-alcoholized THC cocktail product launch. We told you we liked it at $0.28. It’s $0.84 today. We still like it.