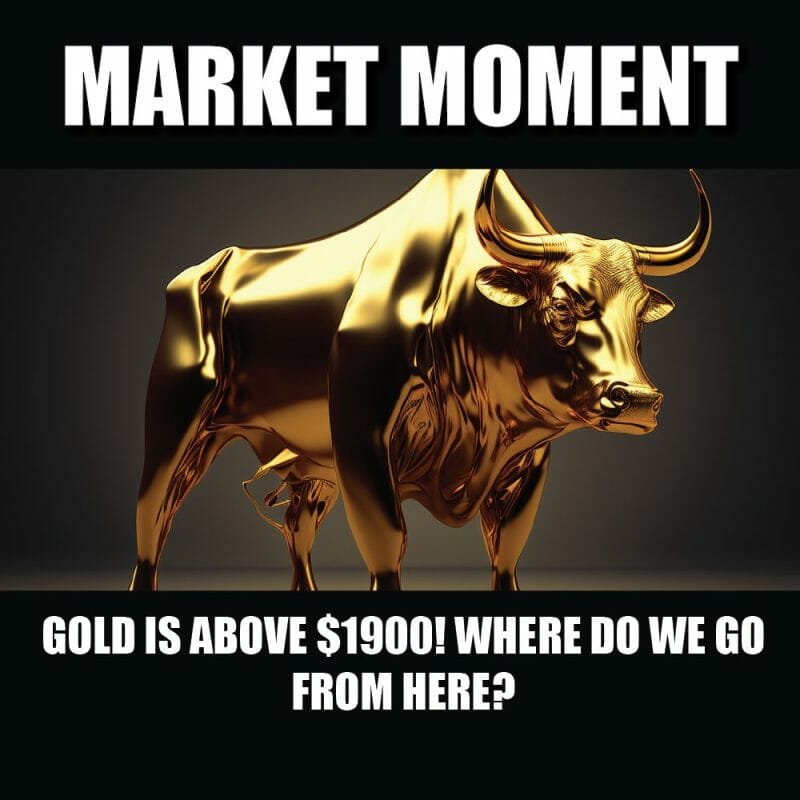 Gold has started off 2023 with a bang. The yellow metal keeps on going and now a major resistance level has been taken out. Very exciting as the Vancouver Resource Investment Conference is just around the corner. Should see some excited CEOs and positive sentiment.

Why this big move in gold? Let’s start with the simple explanation. Markets are beginning to price in a Fed pivot or pause. 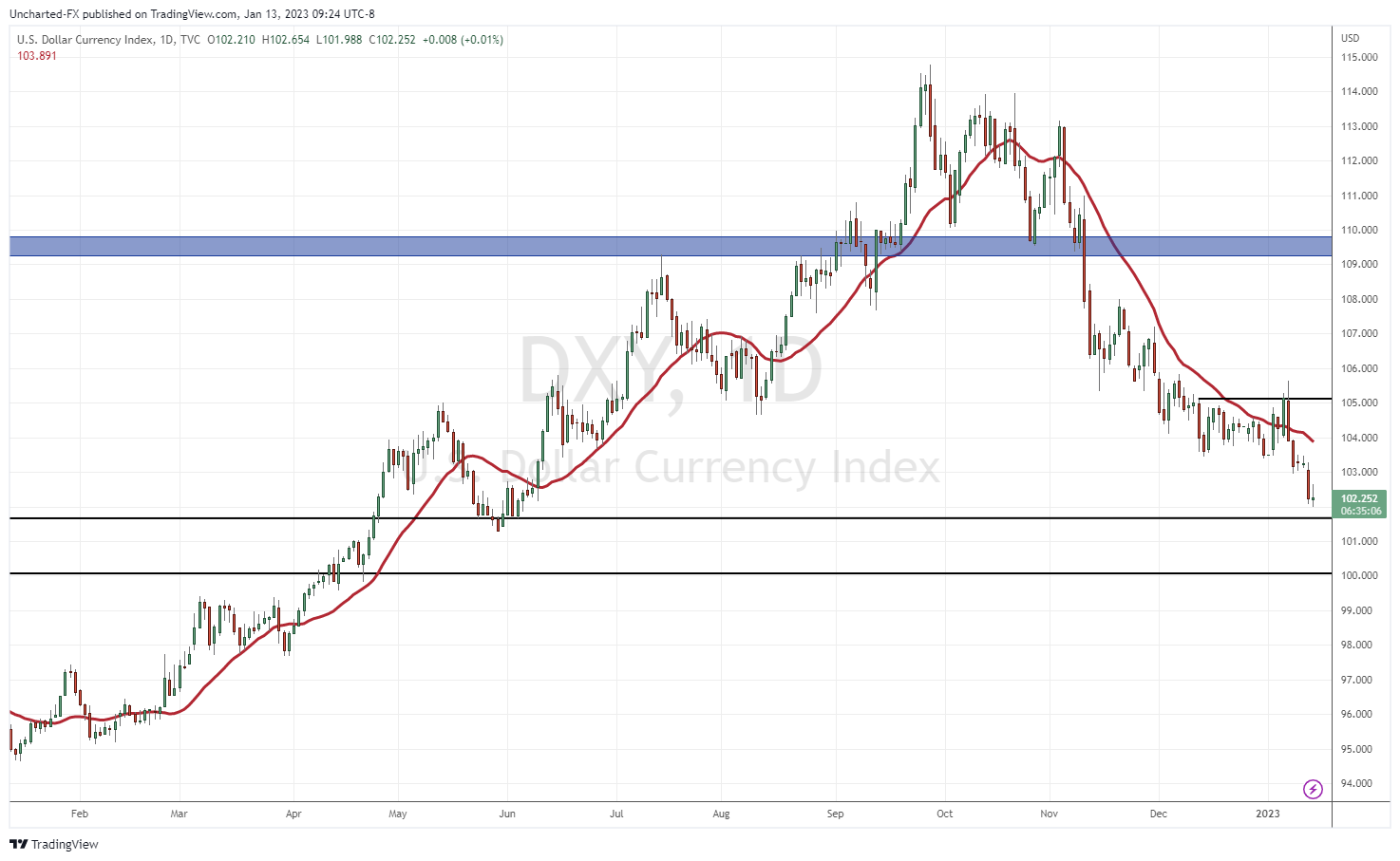 Gold is known as the anti-dollar, and the US dollar has been falling hard as markets expect a turn from the Federal Reserve. The dollar is near a support here, but many traders are watching the psychological important 100 zone for a reaction. 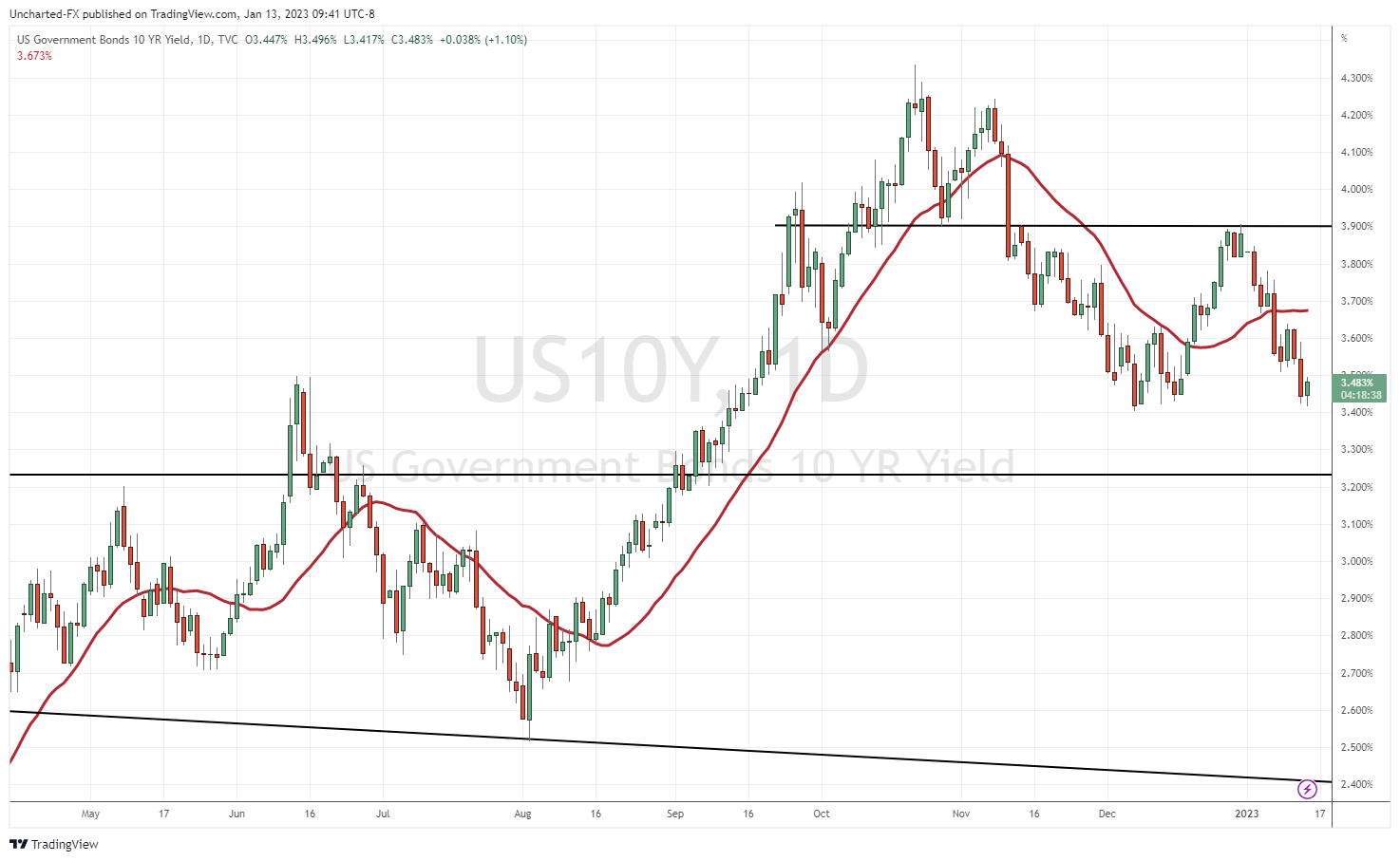 Yields are also dropping. Since gold doesn’t yield anything, when yields drop, gold will do well especially since real yields are still negative when you factor in inflation.

However, for a major drop in yields, it would mean that the markets are pricing in the Fed cutting perhaps due to recession. Personally, I think the markets are acting too prematurely if that’s the case. The Fed meeting in February will be key and bond yields could react in a volatile manner if the Fed maintains its hawkishness and stays the course.

There is one other factor which isn’t getting too much discussion from the mainstream media, but definitely is by the contrarians. China is buying a lot of gold. The question is why?

Some would argue major central bank buying, but one must ask why is China leading the pack. The simple answer is war. The Chinese have seen what happens when you go to war. The Russians saw about $300 billion of their reserves frozen by the US. Russia is holding up because their central bank has been buying gold. Since sanctions have been imposed way back in 2014, as the Ruble depreciated against the US Dollar, Gold vs the Ruble has appreciated.

Just something to consider given the current geopolitics and on goings in China. 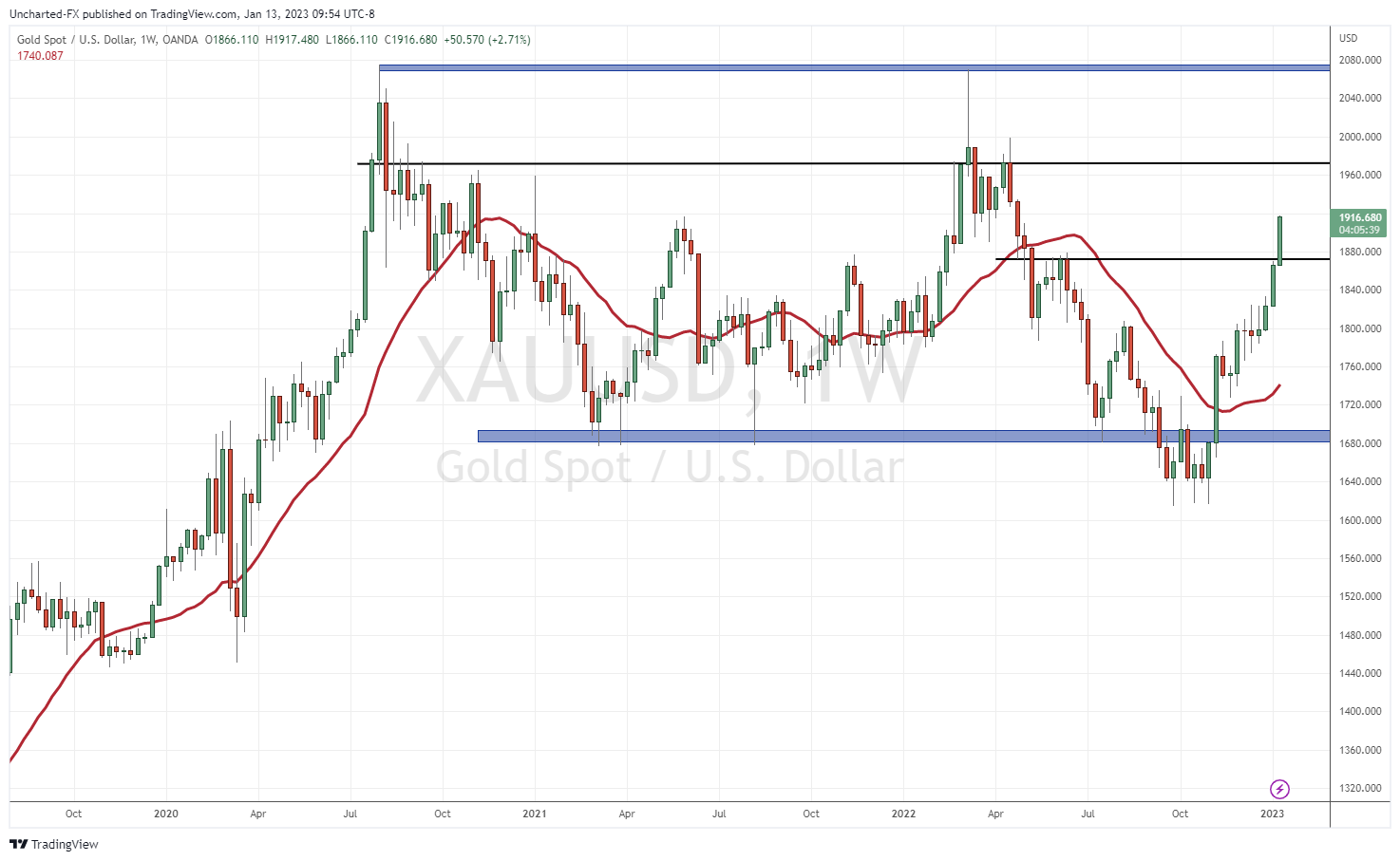 Let’s start our gold analysis by looking at the weekly chart. Gold had a major breakdown back in September 2022 when gold broke below $1680. I was expecting a move down to $1500 as long as the price remained below $1680 which now acted as resistance.

Instead, gold did not sell off. Gold actually closed back above $1680 confirming a false or fake breakdown and a reversal. This is very bullish.

I want to highlight the line I have drawn at the $1875 zone. If we can confirm a strong weekly close, which is pretty much guaranteed unless we see a major sell off in the last few hours of the trading day, then we have another major breakout.

For bulls, notice how gold can never remain above $1975 on a weekly close basis. We also tend to sell off around this zone. I do expect a sell off initially. Perhaps back to $1875. And then the next wave up will see us finally confirm a strong weekly close above $1975. This would then take us to new record all time highs this year. 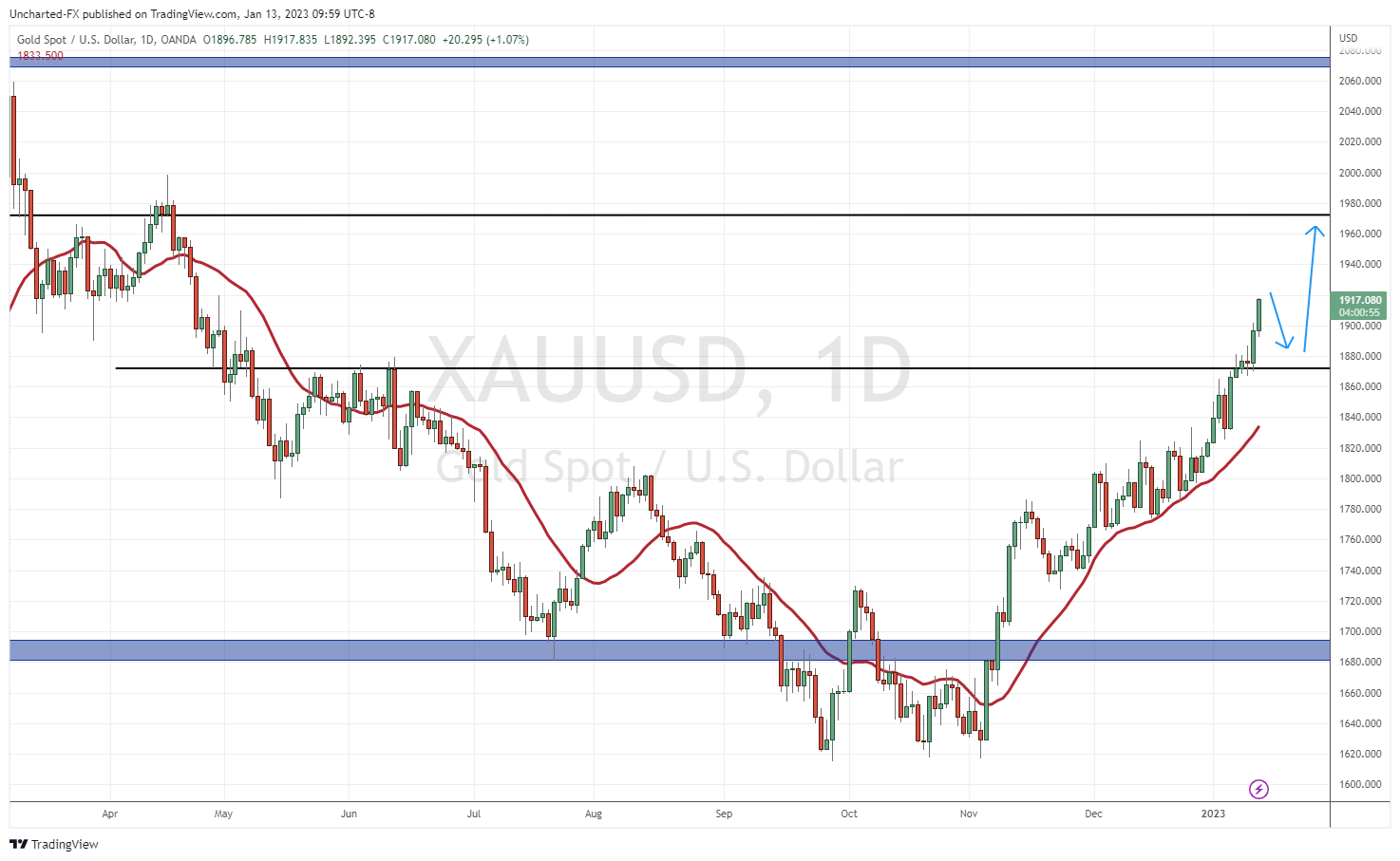 Gold on the daily chart is just running away. As a trader, I would wait for some sort of pullback to get in. I don’t recommend chasing. I have drawn out what I would like to see in arrows. We may not pullback now, but I would love to see one. Perhaps we just rally up to $1975 before we do pullback. If that is the case, I will remain patient.

Let me end off with one more chart. 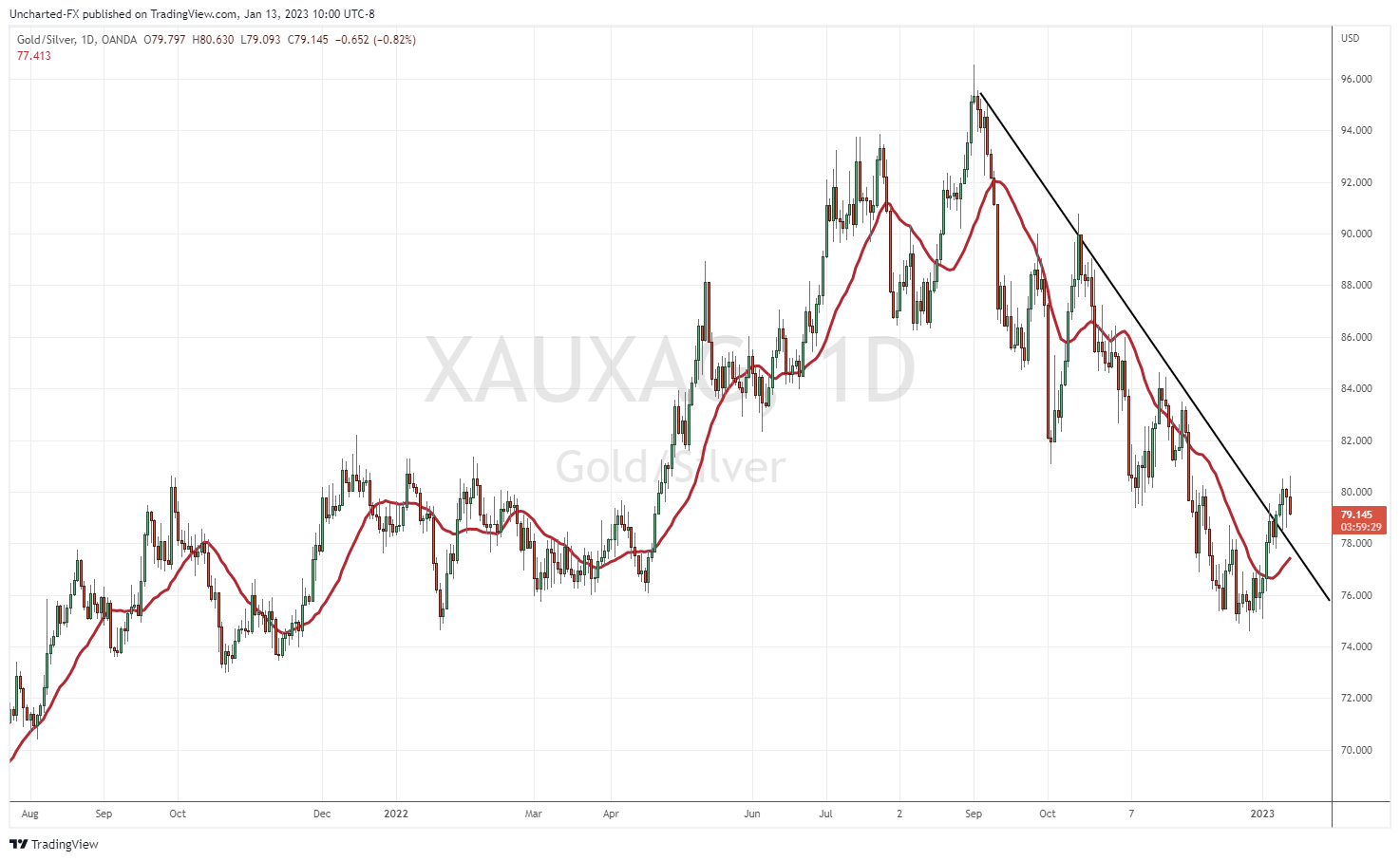 This is the gold/silver ratio. It indicates how many ounces of silver is required to equal one ounce of gold in price. Currently, it takes about 79 silver ounces to equal 1 ounce of gold.

Silver bulls love this chart because historically, when silver was money, the gold/silver ratio was close to 15. This means that silver is highly undervalued according to silver bulls.

When the gold/silver ratio heads higher, it is time to buy silver since silver is cheaper.

When the gold/silver ratio heads lower, like it has now, it is time to buy gold since it is cheap. As you can see from my chart, a new uptrend is about to begin. We bottomed at major support and a trendline has broken. This is hinting at a move higher for gold. Much higher.

So is this gold move really due to market pricing in a Fed pivot? Or is there something more geopolitical occurring? Followers know that gold does well in a confidence crisis. When people begin to lose faith in the government, the central bank and the fiat currency, they go to gold. In this way, when I see gold rise quite quickly I start to get a bit worried. To me, there is something else brewing. I am leaning more towards China preparing for something.

But I am a trader, so I work with what I see on the charts, not what I think is going to happen. The charts are very bullish gold, and we should expect to see previous highs be tested this year, and likely new record highs.