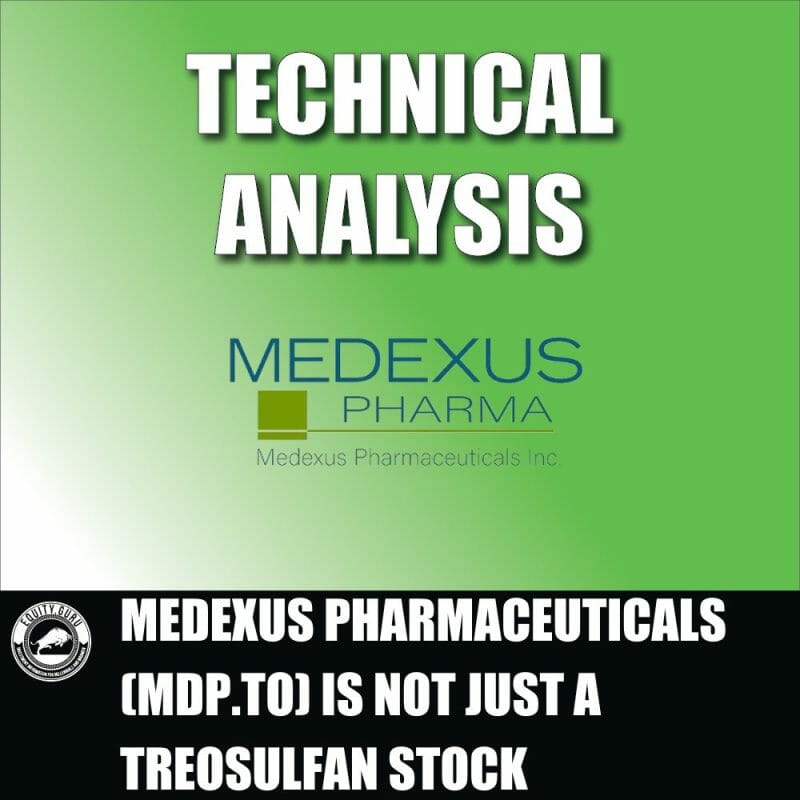 Medexus Pharmaceuticals (MDP.TO) is a specialty pharma company. They are not biotech. There is no research and development here. Medexus is all about sales and marketing, bringing over drugs that are already licensed in Western Europe and then bringing them to North America. A very smart business model which has seen Medexus carve a niche, and report record breaking earnings.

However, in the past few trading days, Medexus Pharmaceuticals stock is trading like a biotech stock. Big percentage moves and volatility.

What was the news that saw markets reacting negatively? It had to do with an update on the Treosulfan NDA resubmission. For a second time, the FDA has issued a second notice of incomplete response regarding Medac’s application resubmission for Treosulfan. 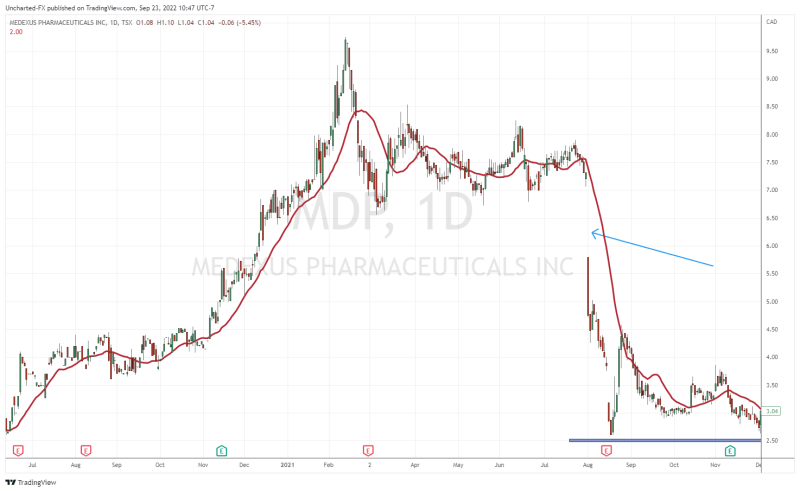 To refresh people’s memories, the Treosulfan and the FDA saga began back in August 2021. Medexus was trading above $7.00 when news came out that the FDA asked for further details on the Treosulfan submission. As you can see from the chart, the news saw the stock gap down and plunge, and really has been weighing on the stock as it headed lower.

History might not exactly repeat itself, but it sure does rhyme. 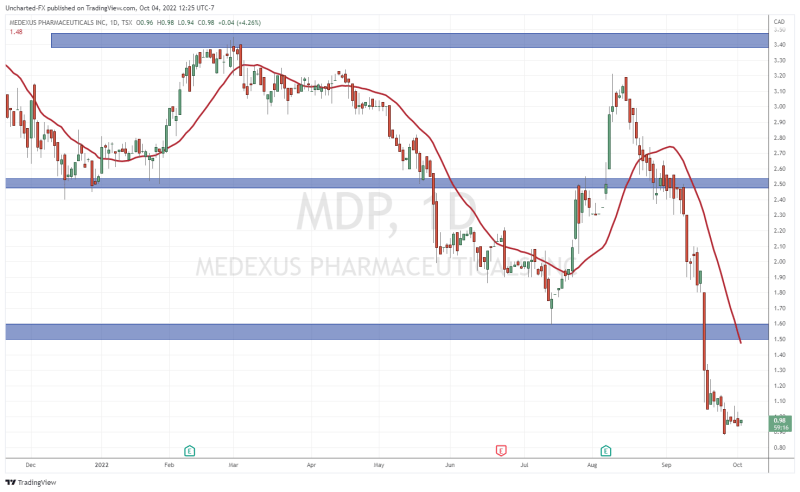 Above is the current daily chart of Medexus. Treosulfan news saw the stock puke and break a major support level at $1.60. Bearish momentum is continuing and the stock formed all time record lows at $0.88.

Technically, we are near the major $1.00 level which tends to act as a major psychological zone. As a technical trader, I was watching for Medexus stock to hold above $1.00. That did not happen. Now, I am watching to see if the stock can reclaim the $1.00.

What was once support now becomes resistance, or a price ceiling. Note that the past five trading days has seen Medexus fail to close above $1.00. Instead we see candle wicks which just verify $1.00 acting as resistance.

The positive? we have begun to range here for many days. This tends to be a good sign that selling pressure is exhausting and a reversal is in the cards. However a break above the range is still the trigger confirmation. If you look at the recent range between September 21st-26th 2022, we actually broke down rather than reversing. If Medexus broke the range to the upside we would have different price action.

The technicals might take some time to develop, but for this stock, the fundamentals provide a very strong case for buying the stock at these levels.

Yes, the Treosulfan news caused a major sell off, but investors need to remember that this is a real company with a strong base business. Medexus Pharmaceuticals is not just a Treosulfan stock, and the market seems to be overreacting to timelines being pushed back. Treosulfan should just be seen as a bonus.

Regarding the Treosulfan drama, it should be noted that Medexus is not playing a part in sending the documents over to the FDA. German company Medac, who holds the commercialization rights to Treosulfan, are the ones in contact with the FDA. Remember, the FDA requests further supporting information to complete Medac’s resubmission but does not require submission of new clinical data. It isn’t like the FDA is going to reject this drug. Treosulfan is approved everywhere else it is sold. The FDA would not get into a back and forth like this if Treosulfan was going to be rejected.

So what can happen next? It does appear as if Q2 2023 is when Treosulfan FDA approval will be confirmed, and perhaps now, Medexus may directly get involved with the Treosulfan file as it appears that Medac cannot handle it.

Putting that all aside, let’s talk numbers.

Recent Q1 2023 earnings saw Medexus confirm its strongest fiscal Q1 in history. This is after the company announced record Q4 2022 earnings. Here are the figures in US Dollars:

CEO Ken d’Etremont wants to remind investors that the core business is strong, and current momentum suggests another record quarter for Q2 2023:

“We remain focused on delivering strong revenue growth and improved overall performance in our current portfolio of products in both the United States and Canada. We were pleased to announce the strongest fiscal Q1 in our company’s history by delivering a record US$23.0 million of revenue and improved operating performance. Overall, our monthly results so far suggest that we are heading towards another strong quarter.”

I will be looking at the EBITDA to increase, and also the impact of the drug Gleolan. Initial sales of this drug will be included in the next earnings report. Medexus previously estimated that Gleolan had generated US$3 million to US$4 million in revenue in the last full quarter before Medexus acquired the exclusive right to commercialize Gleolan in the United States. September 2022 will be the first full month in which Medexus recognizes 100% of Gleolan net sales.

I will leave you with this stat: Q1 earnings were $23 million USD. With the stock sell off, Medexus currently has a market cap of less than $20 million CAD. This is an opportunity.

The street also sees this as an opportunity.

Stifel GMP issued an intraday buy price for the stock at $1.34, notifying investors that Medexus is reliant on its partner Medac for the FDA submission process and there continues to be requests related to the data provided. Stifel also stated that this development is a major setback but potential FDA approval of Treosulfan, upon a resubmission application could still materially change Medexus’ business by more than doubling overall sales. 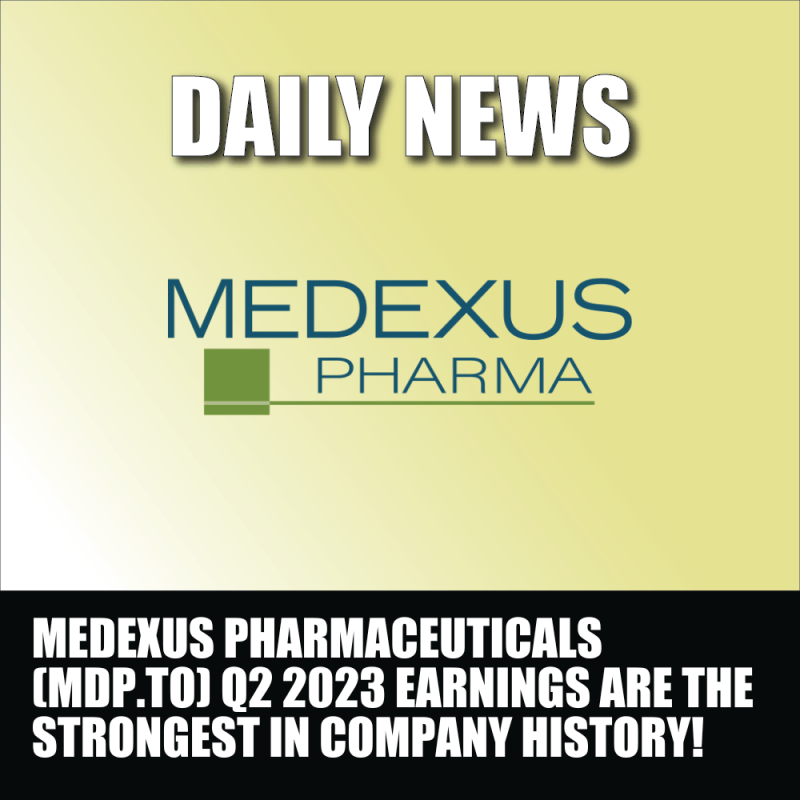 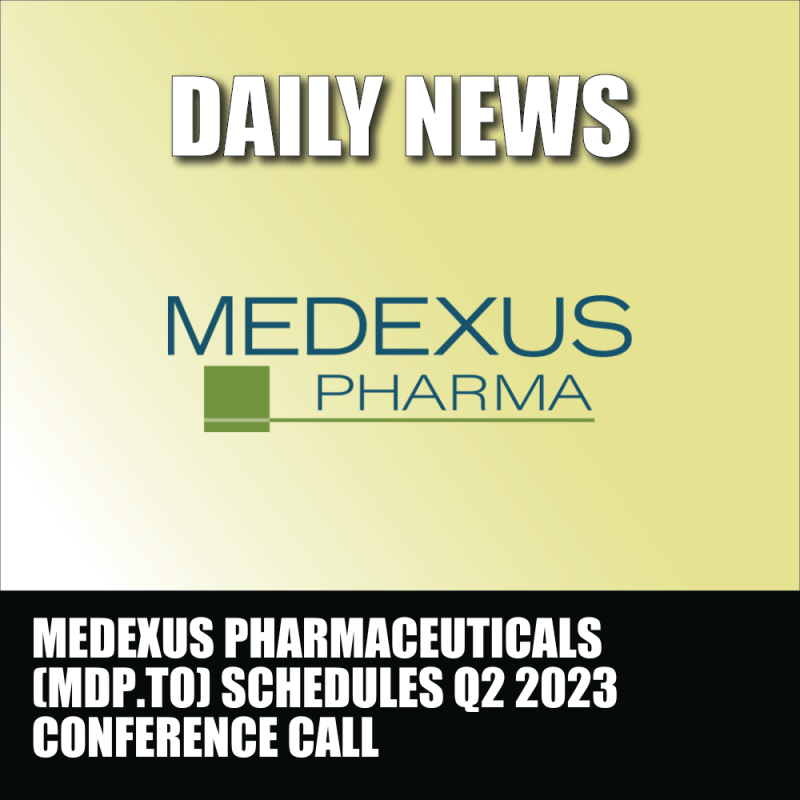 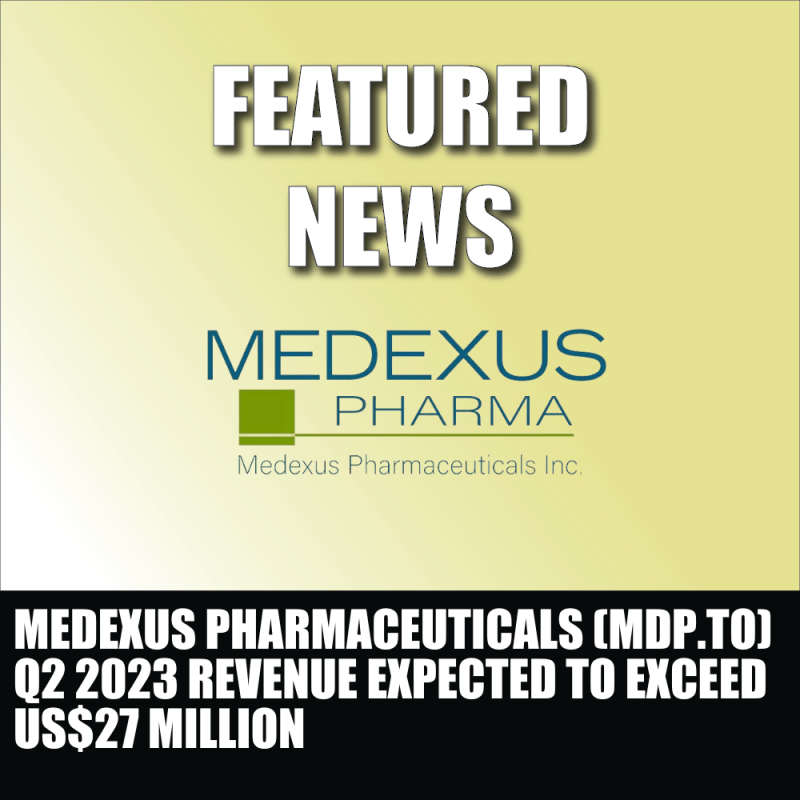 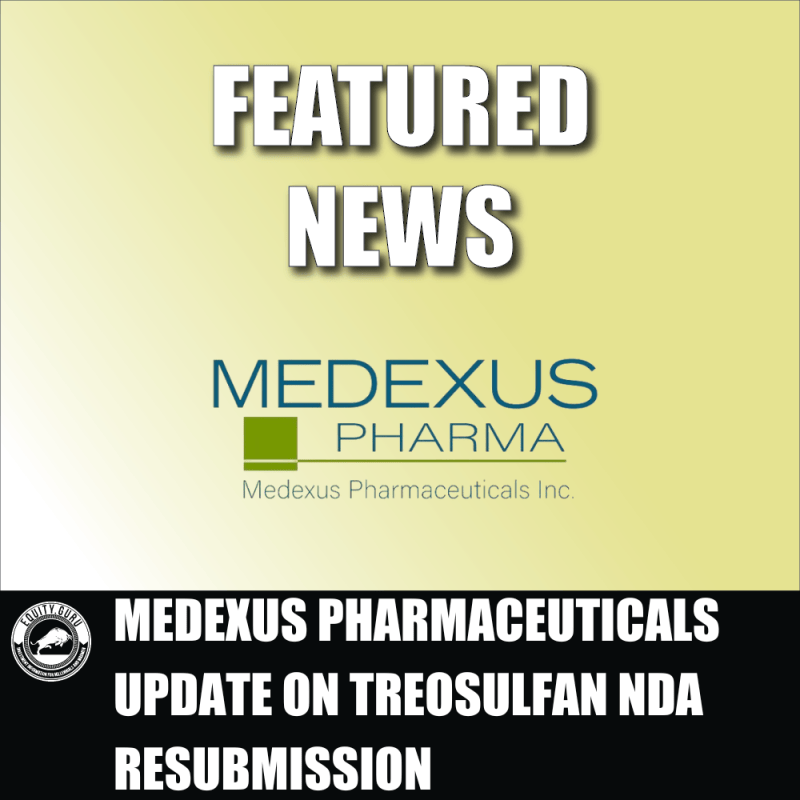 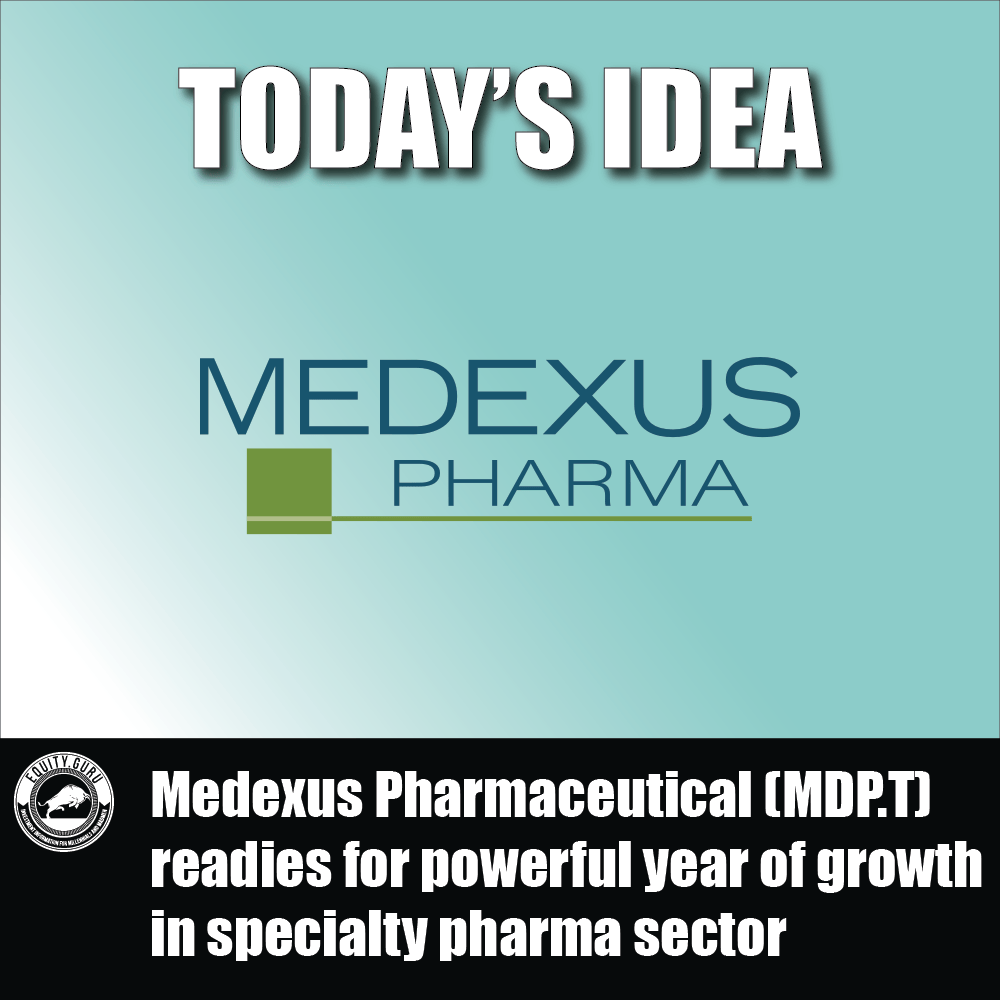 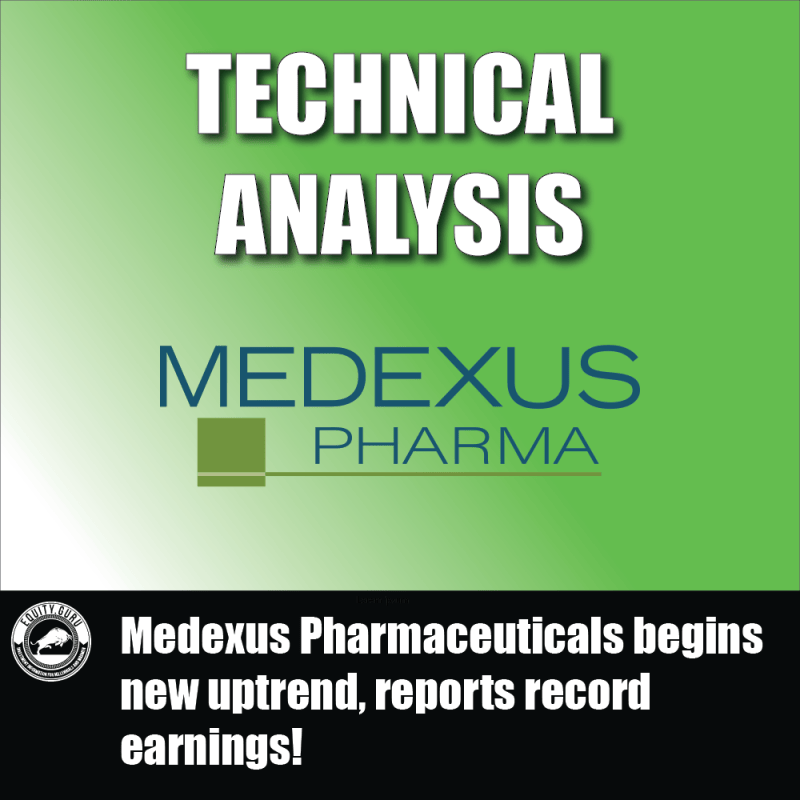