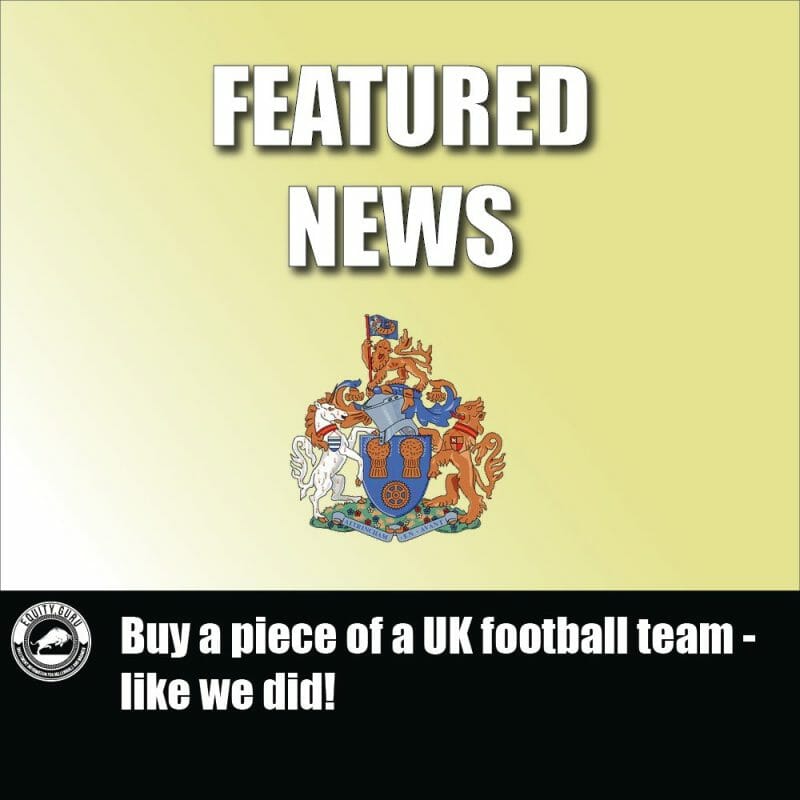 Buy a piece of a UK football team – like we did!

Regular readers will know we got a little bored during covid last year and decided, what the hell, maybe if we called up a bunch of UK football teams, one of them would let us buy in.

Profit motive wasn’t really the thing, more a chance to get on a board and have some fun trying to help build a little club into a less little club, something that had long been an ambition of mine growing up.

Obviously being in Canada was an impediment, but it turned out that was the only impediment. After some due diligence it became clear the best choice for us was Altrincham FC, a part time club at the fifth tier of English football.

It turned out, this was the best investment I’ve ever made. No, it didn’t fill my pockets with money, but waking up early on a Saturday to listen to *my team* fighting their way up (and sometimes down) the table was more fun than I ever had a right to have outside the bedroom. Also, the valuation of the club has risen since I came aboard so, not exactly a terrible financial decision getting in when I did, if I’m honest.

At the time I came in, Alty had plans to get bigger, go full-time, build a new pitch and a sponsors lounge and a new training ground and a youth academy, and grow their squad.. But, like most English clubs, they’d gone through a period of relegations and financial catastrophe somewhat recently, so any advances the club were going to make would have to fit the following austerity criteria:

We’ve done that on a tight budget over the last year, but to keep that growth going, and going responsibly, we need to bring in more investment dollars. So now we’re opening up the club ownership to new participants; that means you.

Altrincham FC is engaging the UK crowdfunding platform Seedrs to raise money from investors, be it 10 pounds or 100,000 pounds, or anything in between. For your money, the club will be giving you something not a lot of clubs offer in these sorts of programs… we’re offering you equity.

That’s right, real shares that can be bought and sold on Seedrs and that, if the club goes up a division, will pay back a promotion dividend.

You may have noticed that Vancouver-born Hollywood hearthrob Ryan Reynolds bought into Wrexham last year, a move that has been the subject of a Netflix TV series that’s out, like, tonight. Wrexham plays in our league. Their budget is miles higher than ours, and that’s why we need to up our game.,. being the courageous little guys can only keep us at this level for so long. Now it’s time to level up.

There are a fair number of crowdfunding programs offered in football every year. I’ve participated in them in the US and in Switzerland, and have seen others in the UK, but more often than not you’re not buying real voting equity in a club with crowdfunding, but rather a token share that gets you on a “VIP” mailing list and maybe a discount on t-shirts, but mostly just gives you the warm fuzzy feeling that you’re part of something, with no way for you ever to get your money back.

This isn’t that. The Alty offer is for real equity, and not at over-inflated valuations that include a ‘premium’ for letting you participate. We’re not adding a digit and going to spend an hour trying to justify it.

This program will be a fair valuation based on comparable clubs, and revenues, and the money raised will go toward growing the squad budget, making some ground improvements, and solidifying our move to full-time football.

The idea here isn’t to raise money by emptying your pockets, but to actually allow you to be an owner, and all that entails.

If the club does well and you decide to sell your shares down the road, well done you. If you hang on to them forever and pass them on your kids – me too!

Full details will come once the pre-registration period is done but, for now, drop your details into the Seedrs page to show you’re interested, and let’s get the Robins growing.

FULL DISCLOSURE: I’m both a shareholder of the club and a director, and receive no incentive, commission, or fee from promoting this program. I’m just proud we’ve delivered something that, as a kid, I always wished existed for real fans.