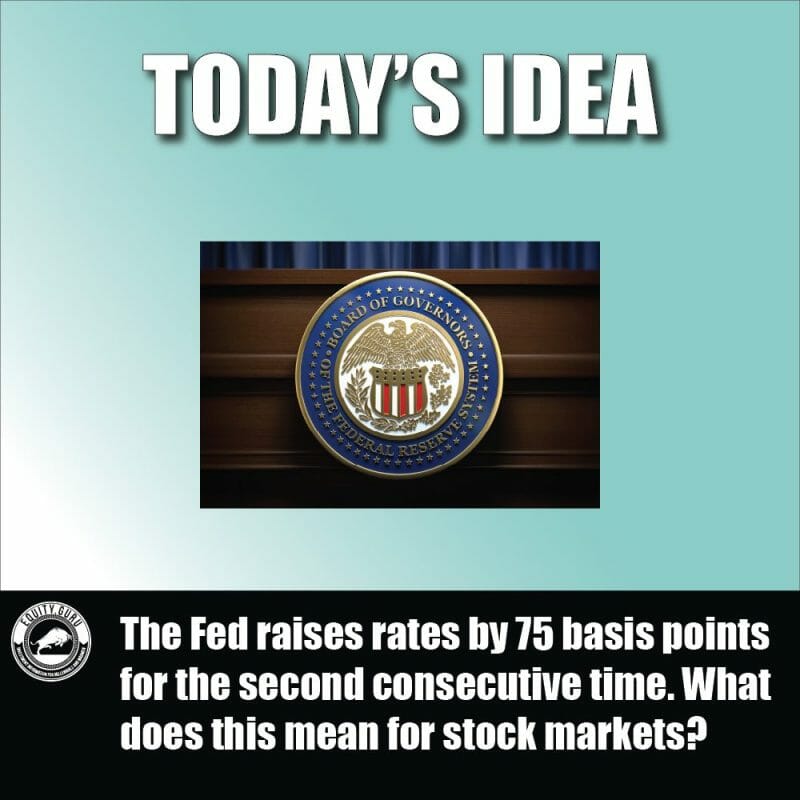 The Fed raises rates by 75 basis points for the second consecutive time. What does this mean for stock markets?

In one word: bullish. The stock markets are loving the hawkish Fed. The Federal Reserve has raised interest rates by 75 basis points for the second consecutive time.

The stock markets largely had this rate hike priced in. Fed futures had a near 100% probability of a 75 basis point hike and the Fed tends not to upset the markets. If there was a surprise that was not priced in, there would have been more volatility. This did not happen as you will see from the charts down below.

So what has changed? For you economic nerds like me, here are the changes from the last statement and the recent FOMC statement: 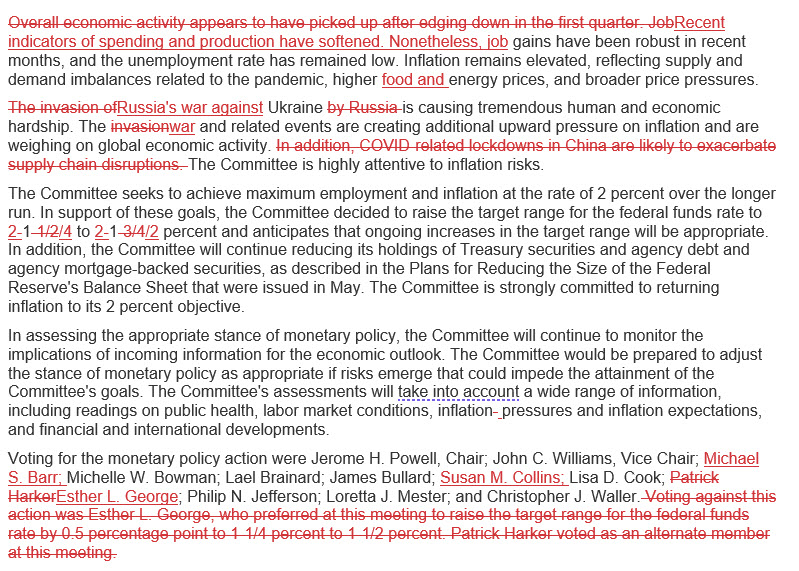 The key takeaway? The Fed remains “strongly committed” to tame inflation and ongoing rate hikes will be appropriate. But there is somewhat of a bearish tone. The Fed is taking a more pragmatic approach and will be making rate hike decisions on a meeting-by-meeting basis. As things stand now, traders are expecting another rate hike come September. They are expecting the target rate to hit 2.75%-3.00% (currently we are at 2.25%).

What would influence the Fed? Well obviously the inflation data. With inflation coming in at 9.1% for the month of June, we are not seeing signs of peak inflation. More rates will be required to tame inflation.

The size of the Fed rate hikes will depend on inflation numbers. If we see July CPI come in below 9.1%, many will be saying this is the sign that inflation is peaking and the Fed may start raising by 50 or 25 basis points rather than 75. The opposite can happen as well. If inflation numbers continue to rise, the Fed may need to be more aggressive and hike a full 1% or more!

What else could affect the Fed? A recession. Powell seemed to avoid using the R word during his press conference. A recession slows down the economy which should see demand slowing down. People spend less. That would theoretically help bring down the non-monetary inflation. The monetary inflation is being dealt with through quantitative tightening.

Some of you all know that today (July 28th) we get the Q2 GDP data. If it comes out negative then we have two consecutive negative growth quarters which means the US is officially in a recession. Generally, central banks cut interest rates to combat a recession. This might be problematic especially if demand does not drop with a recession. Governments tend to spend more money to combat inflation (aggregate demand for you Keynesianists) but that would just worsen inflation if the recession is not severe and demand killing.

What does the Fed think? The economy is fine and shows no signs of recession. Powell himself does not think the US economy is in a recession as he expects Q2 GDP to be barely positive:

“Think about what a recession is. It’s a broad-based decline across many industries that’s sustained more than a couple of months. This doesn’t seem like that now,” he said. “The real reason is the labor market has been such a strong signal of economic strength that it makes you question the GDP data.”

However, Powell did acknowledge that “recent indicators of spending and production have softened“:

“Nonetheless, job gains have been robust in recent months, and the unemployment rate has remained low,” the committee added, using language similar to the June statement. Officials again described inflation as “elevated” and ascribed the situation to supply chain issues and higher prices for food and energy along with “broader price pressures.”

Since a rise in interest rates impacts mortgages, auto loans and credit cards, it is safe to say that inflation together with rising borrowing costs are squeezing the consumers. Western nations are known for their large middle class debt, and this debt is getting more expensive to service. As rates continue to move higher, signs of a slowdown will be more apparent.

Central bank rate hikes will lead to a recession, which is demand killing and should bring down non-monetary inflation. Powell’s choice in meme form can be seen like this: 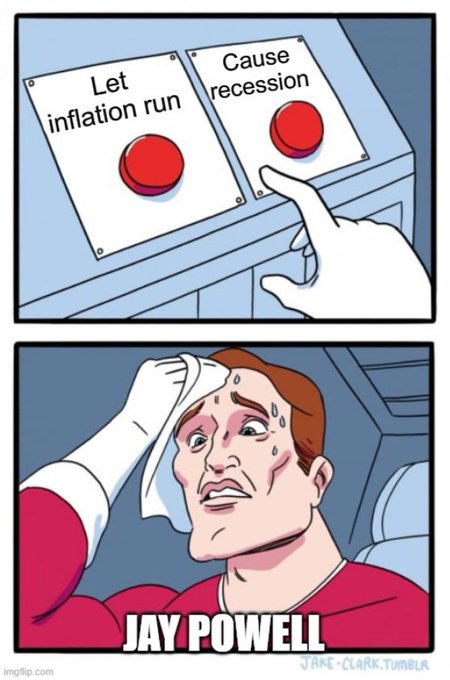 These are the two choices.

I know a LOT of people are betting on a recession to be confirmed today and that would thus lead to the Fed and other central banks having to cut interest rates to spur the economy. For you conspiracy fans out there, this showed up on the White House blog a week ago: It’s a bit scary to see how things are just being redefined. It probably is for political reasons, but perhaps this will also be a way for the Fed to keep raising interest rates to tame inflation.

We will find out today whether the US is officially in a recession. If not, then we will be looking at Q1 2023 depending on how Q3 2022 GDP data prints. 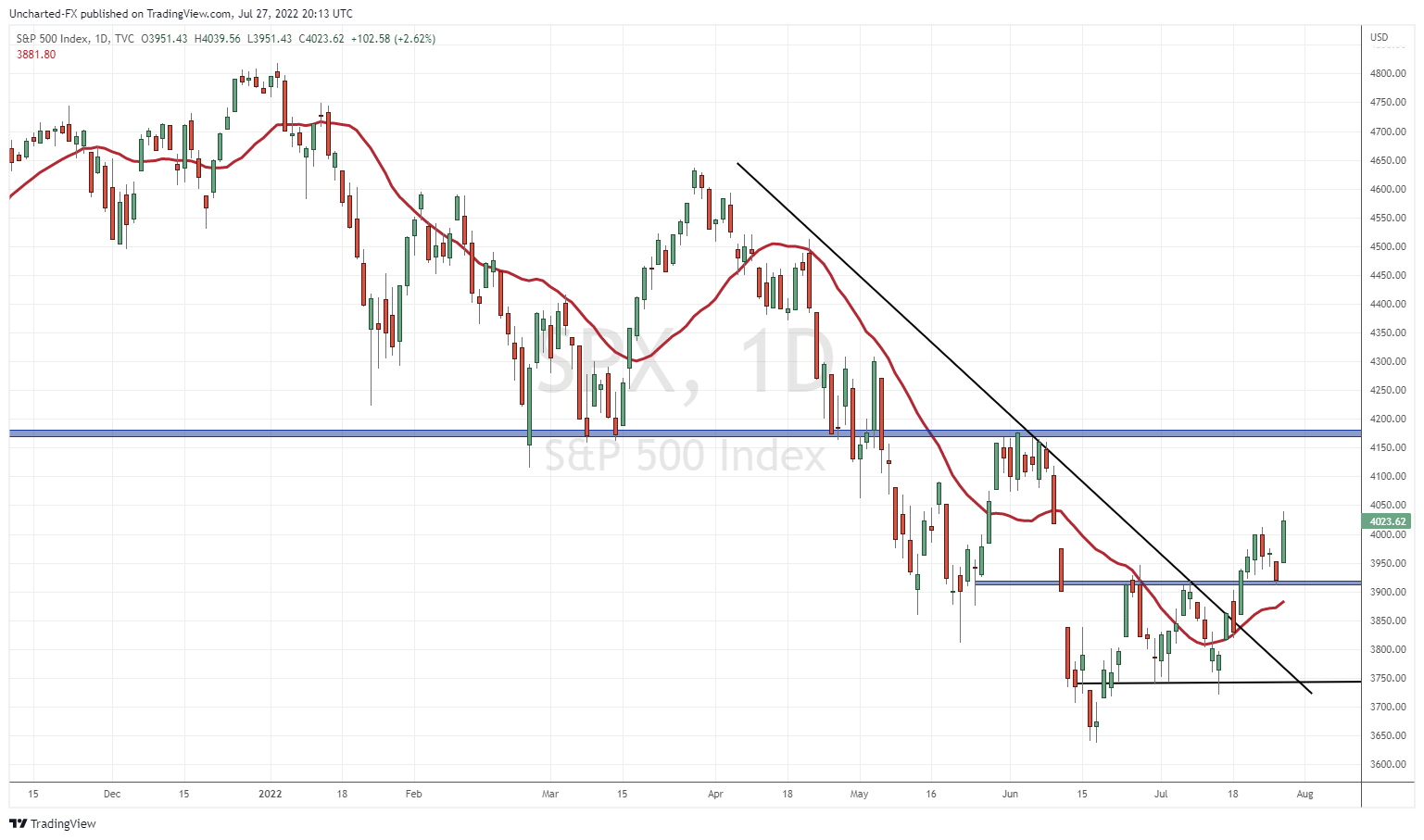 So what does this mean for markets? As you can see from the post Fed reaction, the S&P 500 and other US stock markets liked what the Fed said. Confidence in the Fed remains and they like the hawkish stance.

However I think this is because the market believes that inflation is going to peak and the Fed is close to the top of its rate hike cycle. I say this because of the chart of the 10 year yield: 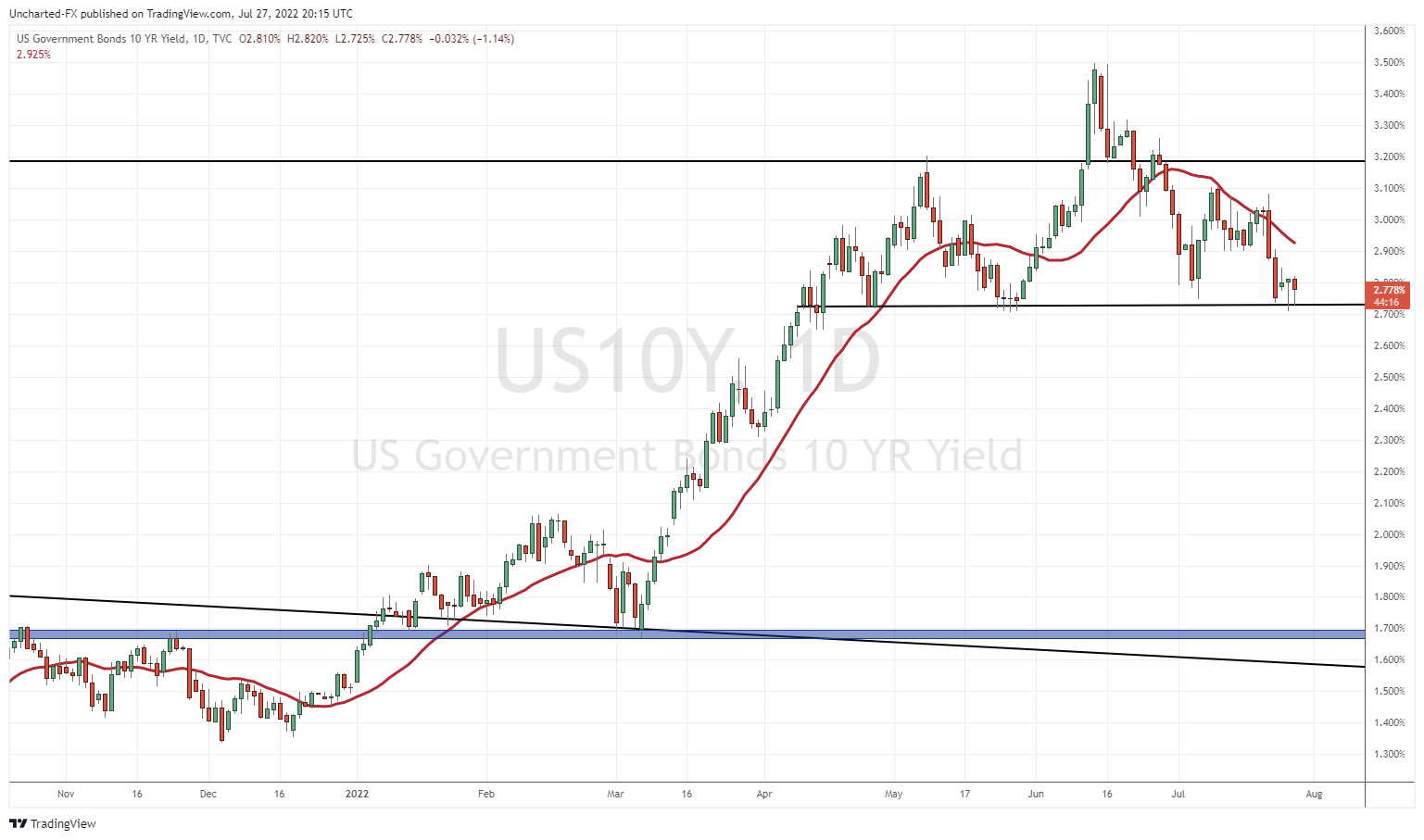 Yields look ready to drop and the thinking is that investors are buying bonds because they yield a decent amount currently. The bonds you hold now will be worth more than the bonds issued in the future when the Fed begins to cut rates and newer bonds yield less.

I just want to say that from a technical analysis perspective, there is nothing confirming that this is true. The chart looks ready to breakdown but I would need to see yields close below 2.70% to officially trigger this move in yields.

If the market starts to think that rates need to go higher then we will see a bounce from 2.7% likely crossing back above 3% and higher. July CPI data coming in higher than expected could be the trigger which sees yields rising once again.

Going back to my stock market chart, I recently wrote that this was a breakout and we were bullish as long as the S&P 500 held above 3900. Effectively calling the bottom. We held the zone of interest and bounced off of it as expected from typical breakout and retest price action.

Things are looking good but the real test is coming. Exhibit B, the weekly timeframe: 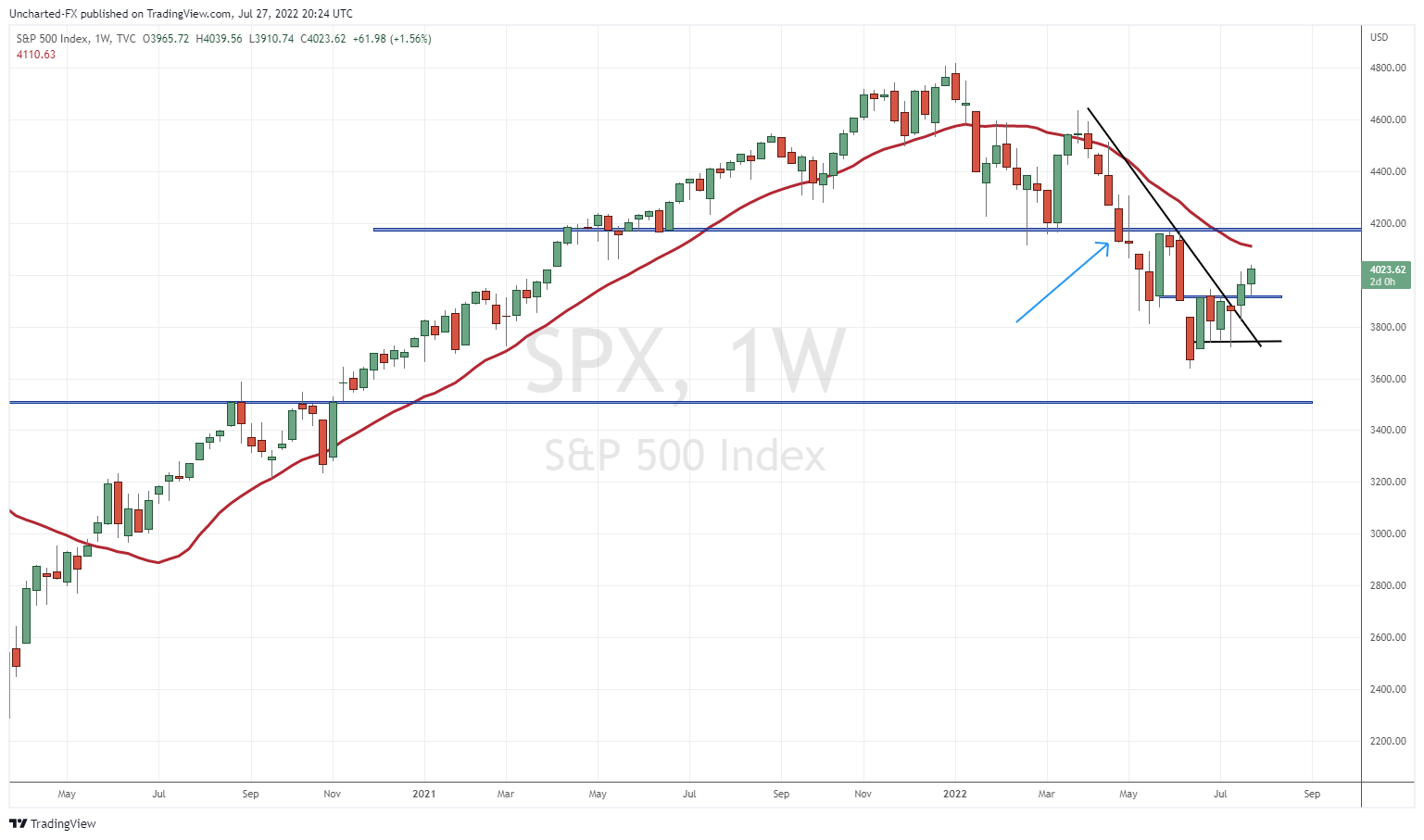 You are looking at the weekly chart of the S&P 500. All this means is that each candle in green or red indicates a full week of trading (Monday-Friday), or a week of trading. Me and many other technical analysts turned bearish on stock markets when we closed below 4200 back in the week of April 25th 2022. Since then, we did pullback to retest this zone just to see the bears pile in.

If we remain above 3900 then another retest of 4200 is expected. This is the real key to determining whether markets will end the downtrend or make another leg lower. We MUST see the weekly candle close above 4200 in recent weeks to nullify the downtrend.

In summary, I am cautiously bullish right now, but once we cross and close above 4200 on the weekly timeframe, I turn into a perma bull.

There are still a lot of potential things which can hit these markets besides rate hikes and inflation. I am talking about issues in Europe both financially and geopolitically with gas prices rising. China seems to have tons of problems and they are getting quite hostile with talks of Nancy Pelosi (one of the greatest traders of our time!) visiting Taiwan. These black swans are not priced into current markets.