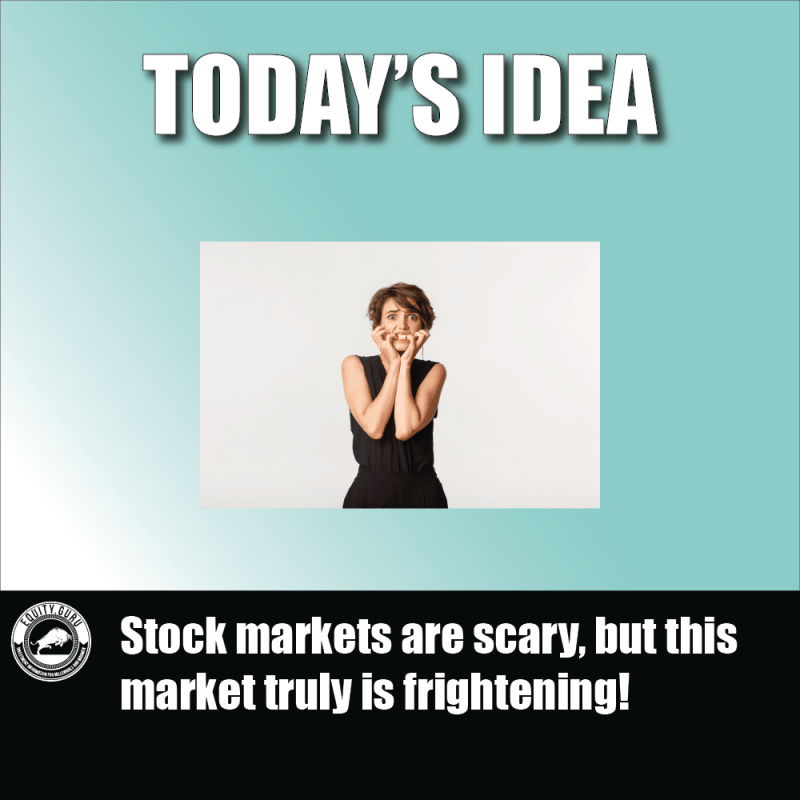 Stock markets are scary, but this market truly is frightening!

Stock markets are looking scary, but the debt markets are truly worrying. Before we get to the instability in debt, and what that means, let’s breakdown what is affecting markets.

Not a surprise that inflation numbers came out higher than expected. Peak inflation narrative is quickly becoming the new transitory inflation. You will hear this from central banks and the media in upcoming weeks.

My readers were ahead of the curve both from a fundamental and technical perspective.

From a fundamental perspective, I have warned readers that the Fed may crash the markets. Back in April and in May, I explained the dilemma the Fed is facing in order to tame inflation.

Here is what I said:

If you recall, for many months the Fed has been telling us that this inflation is only transitory and temporary. That inflation will disappear on its own. Essentially, markets believed because of this transitory nature, the Fed would not need to raise rates as much. 6-7 rate hikes would take us to around 3%, but that’s okay if inflation magically reduces on its own back to around 2% as the Fed said it would. Many in the markets believed this. But this has changed.

If you are versed in classical economics, or just followed my work here on Equity Guru, then you knew this was coming ever since the Fed began printing boat loads of money. Money supply growth is fine as long as productivity expands too. It did not. Now we are in a situation where there are people with more money competing for the same number of goods and services.

In order to tame monetary inflation, the Fed needs to raise interest rates and reduce money supply. The latter is occurring with quantitative tightening beginning in June. The former is also occurring but the Fed is at a handicap. They are behind the curve which is why we are likely going to see a 75 basis point hike today. The truth is interest rates need to go MUCH higher to combat this inflation. Remember, Paul Volcker too interest rates to 20% the last time the US had a bout with inflation.

Dealing with non-monetary inflation is another thing. You know your supply chains and what not. Either supply/productivity needs to increase. Why? Well we are in a situation post the pandemic and government spending where there are people with more money competing for the same number of goods and services. Generally government would spend money to try and increase productivity, but we don’t want that to happen NOW because that would just worsen inflation. We want to see the wealthy and corporations spend this money, but they are reluctant too because many are prepping for a recession.

This gets us to the second way to tame non monetary inflation. Kill demand. A recession would help, but it would have to be a severe recession. People still spend money in a recession, so it would have to be real bad to get people spending less. Some are saying this is what the Chinese are doing to deal with rising energy and food prices and shortages. They are implementing random lockdowns not because of Covid, but to kill demand. As crazy as it may sound, market bulls would probably love another lockdown. It would reverse economic policy and kill demand. But it wouldn’t necessarily solve the monetary inflation trouble. Some of my geopolitical friends say the Chinese could also be doing this on purpose to attack the US by worsening non-monetary inflation due to the amount of “made in China” goods Americans buy. Russia hitting energy and China hitting goods. But this is a discussion for another article.

The west is used to low interest rates. Because bond yields have been low as well, it has forced money to chase riskier assets for yield. This explains why there is are real estate and stock market bubbles around the western world. It could also explain the incredible rise in cryptocurrency. A new asset class which saw money run in for yield. This is why the debt/bond markets are so important. In 2010, the Fed and other western central banks began artificially reducing the long end of the yield curve. The idea was it would force money to run into riskier assets which would cause a wealth effect. This is all good until the bubble pops. The worst bubble is the one in the bond market.

Before we talk about that, a quick look at the Stock market chart. I will go over the S&P 500 but other markets look the same. 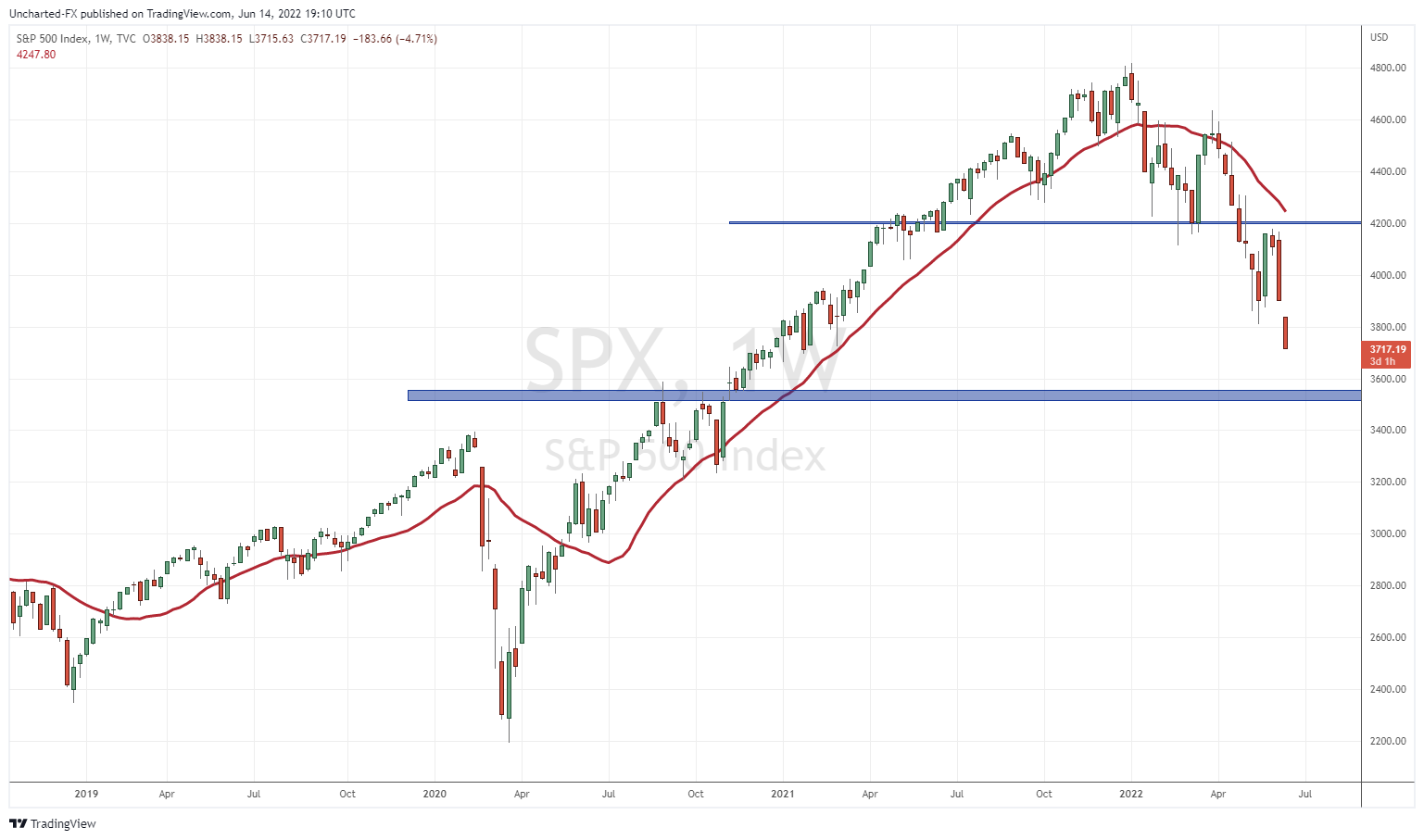 Now let’s get to a short that has me a bit worried. We all knew that one day interest rates would have to go up. And I mean in a big way. Perhaps even to the double digits leading to a major crash in pretty much everything. The sign of this would be seen on the chart of the ten year yield or the TNX. And we begun to see this which is spooking the markets in a big way. 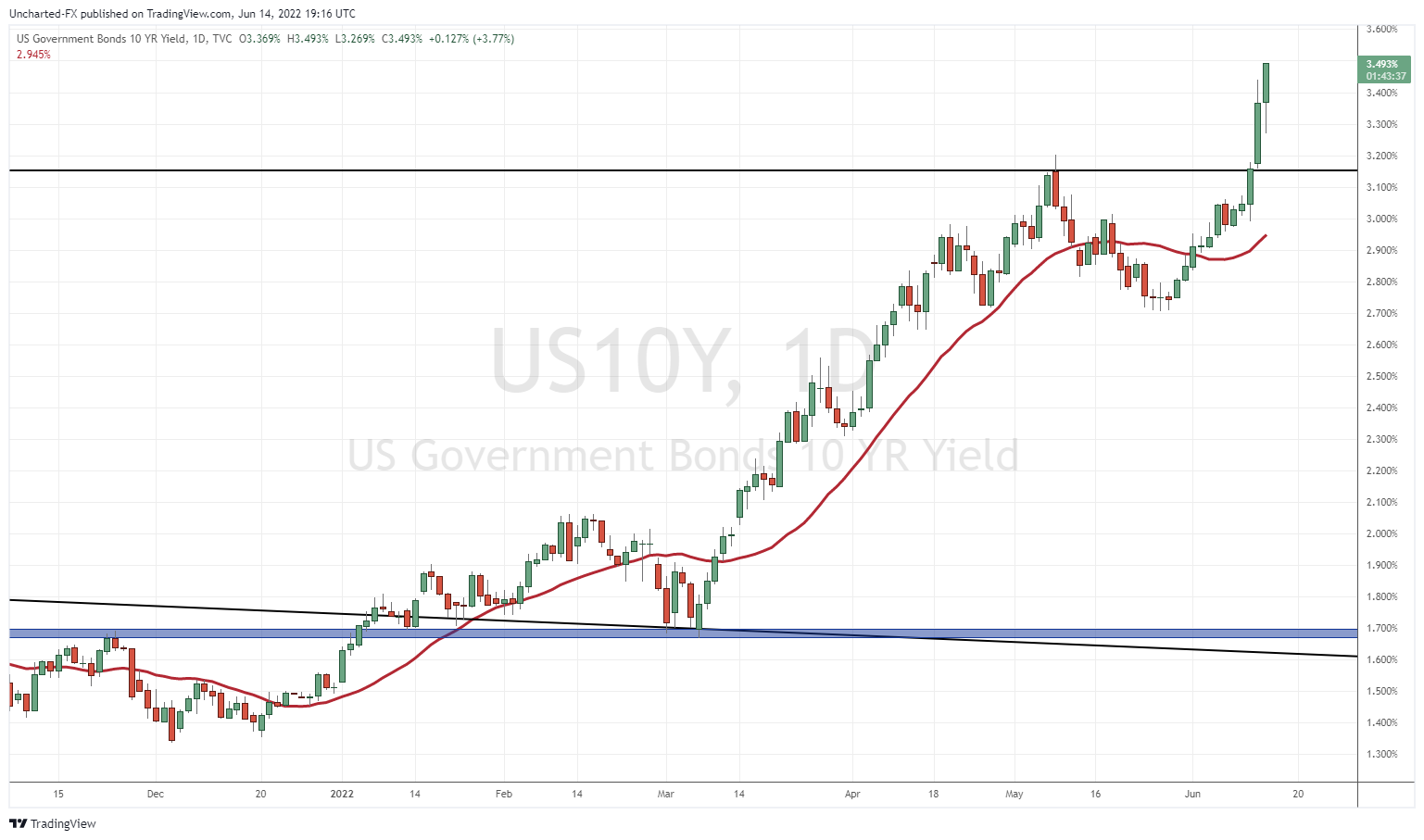 The ten year yield is spiking above 3.49% and moving in a big way. The debt markets are the largest in the world so it requires trillions of dollars to do this. If this chart rises in an uncontrollable fashion, which we are beginning to see now, it is not going to be great for stock markets…and for the indebted middle class. It would mean interest rates are heading much higher.

We are seeing instability in the debt market. The real question is, what are the Federal Reserve going to do about it? How will the Fed stop the bleeding? Will they begin buying bonds to try to bring down rates?  This is when they just began quantitative tightening in June. Meaning they are selling bonds.

Perhaps they do this off balance sheet but that’s like 4d chess, or some might say, in the realm of conspiracy. Printing more money to buy things could create more inflation, but the Fed can do things such as operation twist or reverse repo to manage that money supply. The real inflation is coming from the government spending.

The Fed must stabilize the debt market or this whole thing melts down. Everything derives market from the debt markets, and we have an everything bubble because of low rates. The stock market itself, is a derivative of what is occurring in the debt market.

I want to cover three ways rates could rise. A lot of people talk about foreign holders of US treasuries selling off treasuries (remember, selling bonds causes yields to rise). China is always touted as the ones who would do this. Possible. In fact, they probably will given they have just seen what happens with Russia. $300 Billion worth of Russian foreign reserves were frozen. The Russians themselves lessened their treasury holdings a long time ago.

If the Chinese are going to move into Taiwan, the US would obviously use these treasury holdings as a weapon. They won’t pay the Chinese the interest. It is possible the Chinese could dump treasuries, but I think patriotism in the US wins out. US funds and the Fed would step in and buy the treasuries dumped. It might break the rules of quantitative tightening, but the Fed would have a good reason to do so. Financial warfare.

Now Japan is where things get really interesting. Japan is the number 1 holder of US treasuries. Early this year, I wrote two articles explaining why the Bank of Japan is the most important central bank you need to be watching. You can read those pieces here and here. These articles are even more important today. This is why: 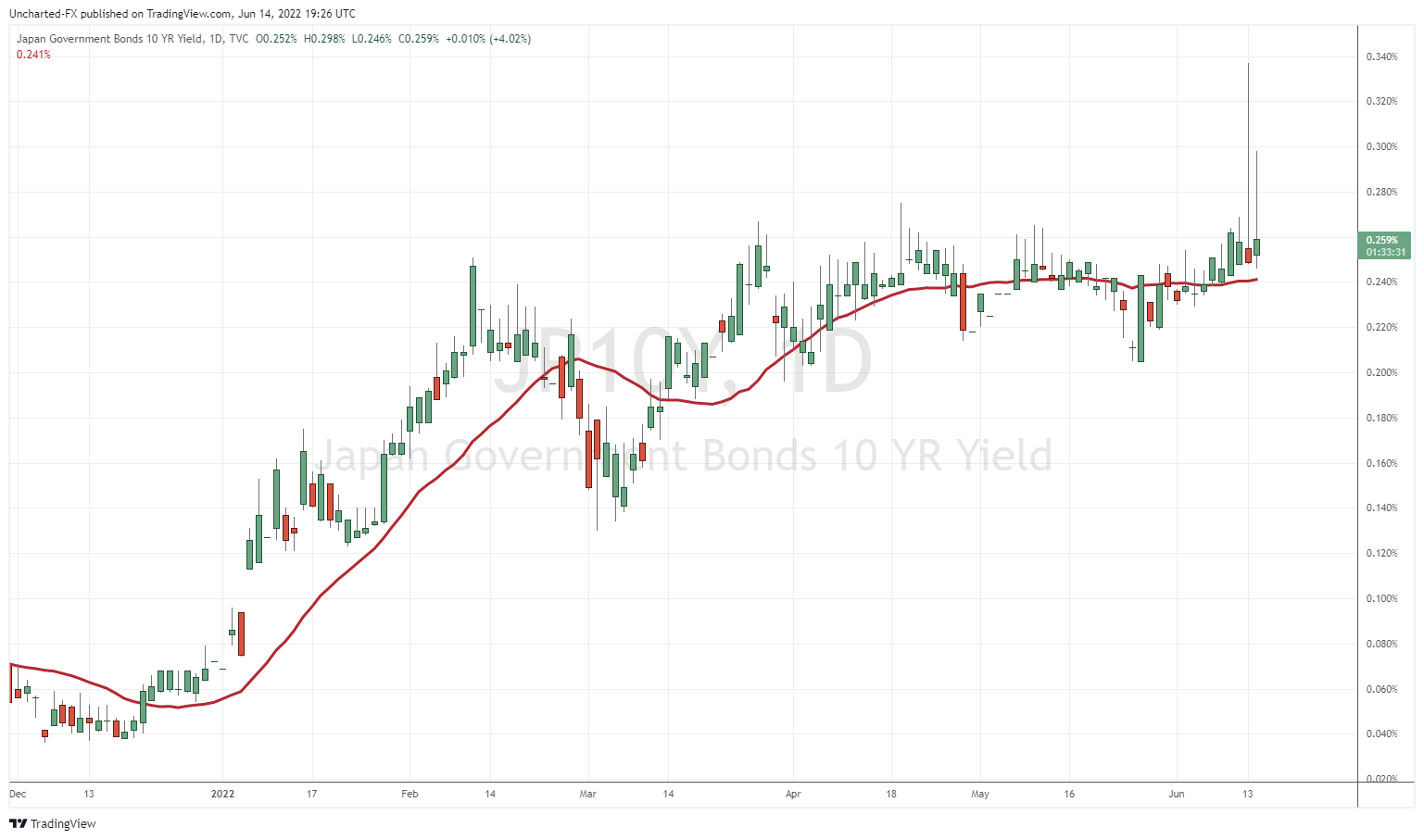 The Bank of Japan (BoJ) are one of the only major central banks not raising interest rates. They are keeping rates in the negative. In order to prevent rates from rising, the Bank of Japan implemented yield curve control. They are ensuring that the 10 year Japanese Government Bond does not yield over 0.25%. They are printing unlimited amounts of Yen to do so. In the last two days, we have seen a spike in the 1o year JGB. The BoJ had to enter and buy an unlimited amount of JGBs. Yields are rising around the world, and the BoJ is ensuring they do not in Japan.

The man pictured to the left is BoJ Governor Haruhiko Kuroda. Remember his face. This man is solely keeping the financial system propped up. If it wasn’t for him, things would be much worse for us.

If this man ever falters for a second during a BoJ press conference, and traders get an impression that the BoJ is capitulating and will start to allow Japanese interest rates to normalize, we will see yields spiking in the US and most of the western world. Interest rates go through the roof, while stock markets and real estate go through the floor.

This man has balls o steel. He is telling traders to do their best in an attempt to break the BoJ. The Yen has broken, but the BoJ stands. The question though is how much weaker will the BoJ allow the Yen to get? At what point does the weakness of the Yen become unbearable?

If the BoJ does not begin raising interest rates to strengthen the Yen, will they ask for some sort of currency intervention? If the Fed and other central banks say no (which is likely since they are tightening the balance sheet), will the BoJ pull off what the Swiss National Bank did in 2015 and begin trying to strengthen the Yen by themselves through the currency markets? Initiate a currency war?

Keep tabs on Japan. This is major and even DeutscheBank have warned that Japan is on the verge of a systemic collapse. This would have huge repurcussions for the world, and to be honest, it would be absolutely terrifying.

I know I am not painting a pretty picture, but this is the truth. The talking heads on financial media cannot tell you this. In fact most of them are trying to keep you focused on the stock market. They don’t want you looking at the debt markets because we are seeing signs of an implosion. It all comes back to central banks. Will they keep selling off bonds for quantitative tightening? Or will they reverse policy. If they choose to reverse without killing demand, then inflation will run away, and we potentially hyperinflate.

Best case scenario? That we go into some sort of recession or a major demand killing event. This would be enough to kill demand to bring down inflation, and then central banks begin cutting interest rates and go back to easy monetary policy to save us from a recession. Be safe out there and prepare for a higher interest rate world.