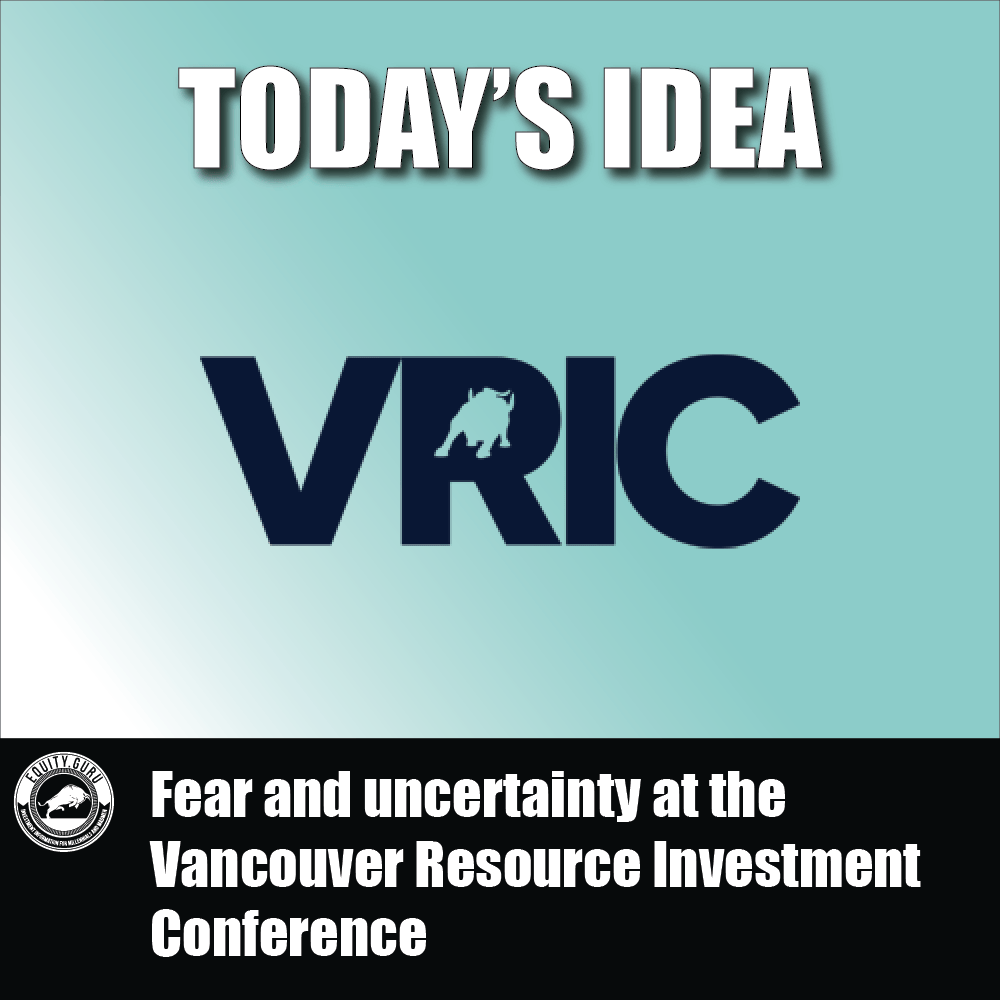 Another Vancouver Resource Investment Conference has come and gone and my fitbit racked up somewhere around 30,000 steps over the two day event. I probably lost weight at the conference but I definitely gained insight.

This year’s VRIC was punctuated by a fair amount of anxiety, and dare I say it? Fear, uncertainty and doubt.

Floating around the booths, the two largest narratives being offered as incentives were ESG and geopolitical demand. Plenty of the companies noted that large percentages of the metal they’re involved in were offered by either China, South Africa or Russia, each of which present significant issues. The favourite this year was Russia for obvious reasons. That suggested demand would be on the rise and their company was positioned to capitalize. That was the pretty sounding spin anyway.

It seemed every booth at the conference had to bring up Vladimir Putin’s gambit in the Ukraine and how everyone is turning out to be on the losing end except presumably for them, who will definitely enjoy a spike in demand. Again maybe.

The fact that most of the companies I chatted with shared the same narratives isn’t necessarily a strike against them. It means they’re prominent and purposeful narratives and something to be taken seriously when considering your investments, but if the economics look good and you can’t make a decision, then maybe finding out who’s having the most impact might be the decider.

Three companies I liked the most: 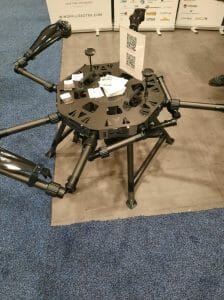 This thing was badass

Yes. I covered this company in the original roundup pre-VRIC, but I didn’t have the sweet drone pic then.

I’m a sucker for cool toys and they had this badass drone on display. Also, Windfall Geotek’s (WIN.V) tech is fairly neat. They fly that sucker over prospective sites to do all their scanning for mineralization and other such things, and the data reports back. It’s more than just the drone obviously, but it’s a damn cool image, that black metal sleek beast straight out of Black Mirror, hovering low over the ground zapping the land with gamma ways to search for radioactivity.

Someone back in some office somewhere gets the readout on his screen, maybe lifts up his visor and relays it back to basecamp. A few button clicks later on the artificial intelligence goes to work.

What they actually do is provide their proprietary CARDS artificial intelligence and data mining service to junior miners, putting together both public and private datasets from multiple different sources including geophysics, drill hole and surface data to determine if there’s a strong probability of mineralization in their clients prospective drill sites.

It’s a sweet deal and at under $10 million market cap, it’s fairly inexpensive.

I almost didn’t approach these guys. It was late and we were circling back to the Equity.Guru booth. It was time to tear down and maybe see about getting ourselves a glass of that complementary post conference wine and see about hauling the equipment out to various bosses cars. But I’m glad I did.

I had a fruitful discussion with the two gentlemen manning the Fission Uranium (FCU.T) booth about the future of energy. Uranium is probably going to be a big deal in the next ten years, they said. Which was odd because it’s an opinion shared by Equity Guru’s own Chris Parry at a panel discussion that happened maybe an hour before this conversation. They weren’t there—I asked. Solar power is limited, geothermal’s hard to find, and oil and gas have had their day. The next available option is uranium.

The biggest problem and the strongest narrative they need to overcome is that nuclear power isn’t safe. We have Fukushima and Chernobyl and Three Mile Island to point at for the risk—except Three Mile Island was built in the 1970’s and staffed by Homer Simpson, Chernobyl’s containment tech is outmoded, and Fukushima had a structural design flaw in that it was built on a fault line. Granted, these are the kinds of things we see only in hindsight, but you only have to look at the CANDU reactor in Darlington, Ontario to find a success story and a solid reason why nuclear power may be the counterpoint to fossil fuels.

They have jurisdiction in northern Saskatchewan and get their drills out in both summer and winter, avoiding the muddy seasons where it doesn’t make sense.

Also, they dropped the notion of next gen nuclear energy on me, including miniaturization tech for nuclear reactors. They were also careful to point out that the technology itself isn’t new. It’s been around forever—riding around in nuclear submarines, and it could theoretically have domestic purposes.

That was enough to peak my interest.

Finally, we have Clean Air Metals (AIR.V), which managed to hit all three of my narrative interests. It wasn’t a matter of just ticking all the boxes, though. Their deal is a high-grade platinum, palladium, copper, nickel project located near Thunder Bay, Ontario. If you’re unfamiliar, platinum are palladium aren’t cheap, and having a good angle on pulling these metals out of the ground means having a good angle on some serious revenue in the future.

Next we have ESG—and they have strong relationship with the First Nations folk around T-bay—and Nickel provides the ‘moving away from fossil fuels’ angle because of course, Nickel goes in EV batteries.

Finally, the geopolitical angle because the majority of the world’s palladium comes from Russia and South Africa. Mister Putin and the rest of the world aren’t on speaking terms, and South Africa is a curious and somewhat politically unsavoury jurisdiction to engage in mining.

So those were my three picks from the Vancouver Investor Resource Conference.

Even though I’ve been gradually picking it up because of the team I work with I came into this with a considerable disadvantage. The fact is I’m not a resources guy by any stretch of the imagination and for a lot of this I had to keep my imposter syndrome in check and not be afraid to ask the dumb questions.

Most of these guys were fairly gracious with helping me out with some of the terminology, techniques and pieces of information I didn’t have. I now know what a preliminary economic assessment (PEA) analysis and a prefeasibility study are, and where they fit into the overall scheme. And honestly, most of this once you put a few pieces together, doesn’t seem to be as complicated as crypto can sometimes get, with its difference in coins, consensus mechanisms, and the minuscule details.

My key takeaways from this conference are that there is some serious money to be made here in not just mining and miners themselves, but in peripherals. And that it’s a fluid, fluctuating market, contingent sometimes on events that are beyond our control, and there are times when if you don’t take advantage of a given circumstance or situation, you may end up missing out.

And nobody wants that.