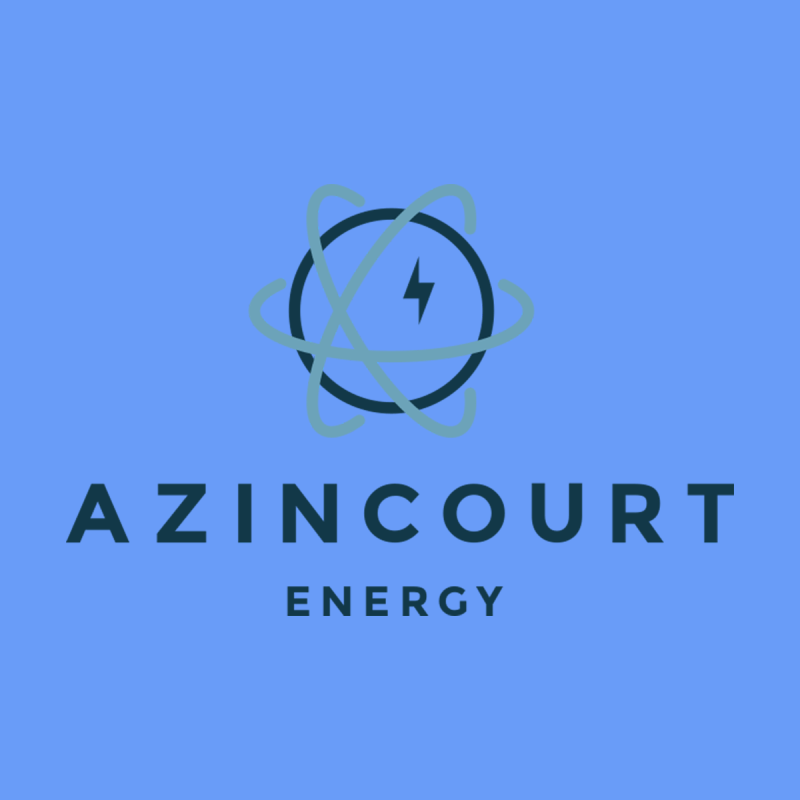 Azincourt Energy (AAZ.V) formed on April 7, 2011. The junior miner has gone through multiple CEOs, properties, and name changes since. The long picture isn’t that pretty and if you only stood on history, investment in the company may seem counterproductive. Since Alex Klenman was appointed president and CEO in July 2017, he has been actively working to change that story. With uranium climbing once again to hit $44.05 USD per pound on February 1, 2022, he may get the push he needs to make a new fortune for the company.

All the talk about Azincourt surrounds the company’s flagship East Preston Uranium Property located in the storied Athabasca Basin. The junior just completed its option agreement with Skyharbour Resources (SYH.V) and Dixie Gold (DG.V) to successfully acquire 70% interest in East Preston by executing $2.5 million CAD in staged exploration and forking over $1.0 million in cash over the last four years. 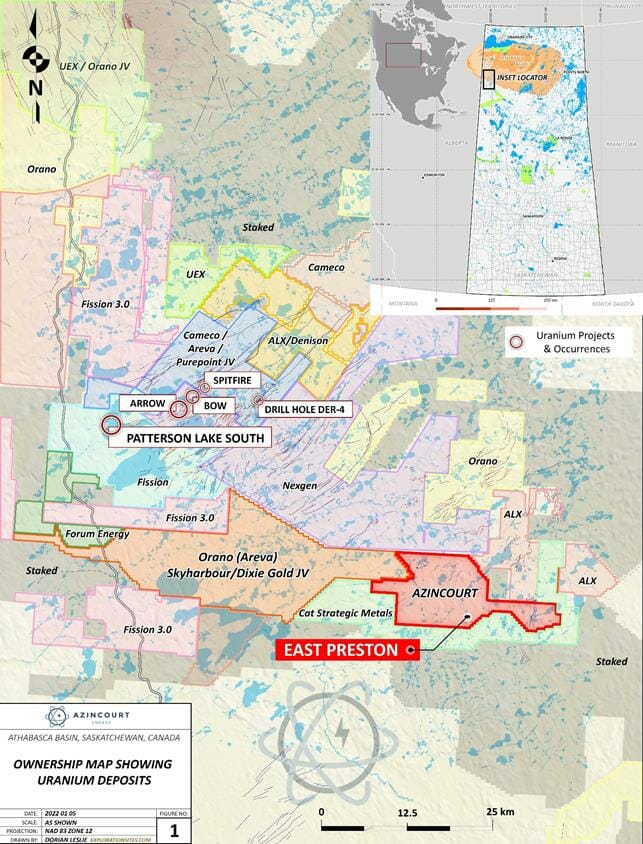 The 25,000-plus hectare project contains similar basement-hosted unconformity to uranium deposits like Next Gen’s Arrow deposit and Cameco’s Eagle Point mine. Sure, proximity to large high-grade uranium deposits and similar geology support prospectivity but its actual groundwork that makes a good uranium project. It seems like Azincourt, even though it has seen its share of bad luck with inclement weather and Covid 19, is finally putting drills in the dirt.

In 2020-2021, the company focused its efforts on a conductive corridor it had established through 2019-2020 drill programs, EM, gravity surveys, magnetic surveys, and a property wide VTEM. Azincourt managed to complete five holes for a total 1195 metres before warm weather forced an early finish to the campaign. However, results from three of those five holes brought good news, showing anomalous and elevated levels of uranium.

No deposit identified yet but the results proved the area contains uranium-bearing fluids which will help the junior zero in on the property’s “sweet spot”.

Since then, the company launched the construction of an exploration camp for its 2021-2022 drill campaign. Discovery Mining Services is carrying out the work at Snoop Lake and will maintain, staff, and manage the camp for the duration of the proposed program.

At the end of January, Azincourt commenced its campaign at East Preston. Full Force Drilling is providing two diamond drill rigs for the program and TerraLogic Exploration is carrying out the work. The program is expected to include 30-35 holes for a total depth of 6,000 metres and will center on the A-G and K-Q trends. Work will begin in the G Zone to continue the work that was cut short last year.

The 2021-2022 drill program is meant to build on the previous drill programs and help the company’s VP of Exploration, Trevor Perkins, define the trend that leads Azincourt to a minable deposit.

Azincourt continues to work close with the surrounding communities and meets regularly with the Clearwater River Dene Nation to ensure all concerns, both environmental and economic, are addressed as it furthers work at East Preston.

The company also has a definitive option agreement with ValOre Metals (VO.V) to acquire up to 75% interest in the Hatchet Lake Uranium Project adjacent to the northeastern margin of the Athabasca Basin. 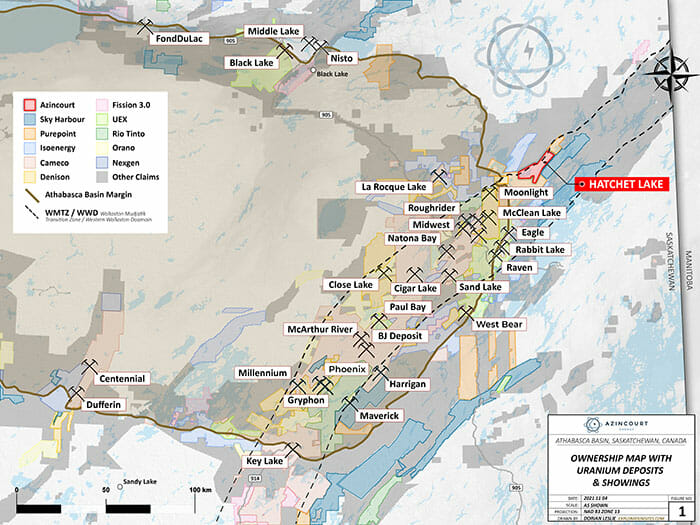 Sampling carried out by ValOre included results of up to 2.43% U3O8 and indicate the presence of uraniferous rocks which typically contain elevated values of uranium.

The company has yet to complete its option agreement which calls for $250K in cash, $500K in shares and $2.0 million in exploration with 36 months.

Azoncourt bookends its exploration portfolio with a collection of uranium properties in Peru: Escalera-Lituania-Condorlit Projects. 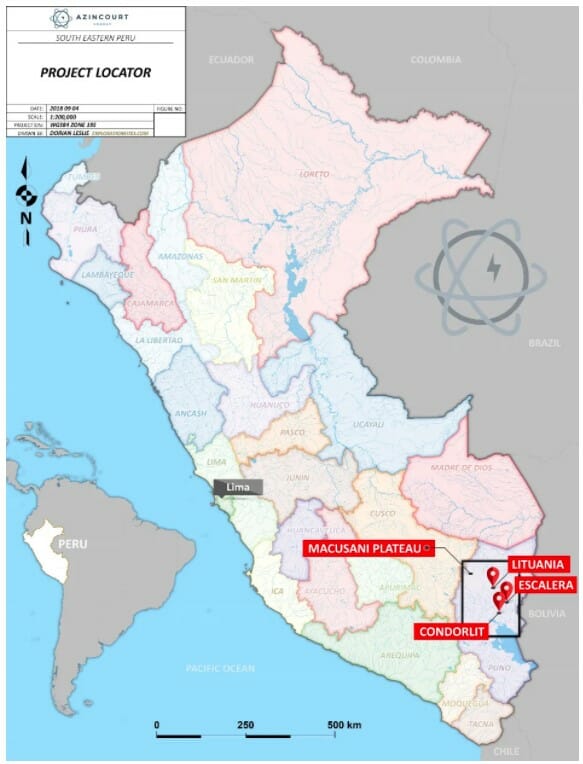 The Escalera Group consists of three concessions totalling approximately 7,400 hectares on the Picotani Plateau. Surface rock samples collected in 2017 returned values up to 3,560 ppm uranium and 153 ppm lithium, while historic samples taken from the Escalera project have shown values up to 6,812 ppm uranium. 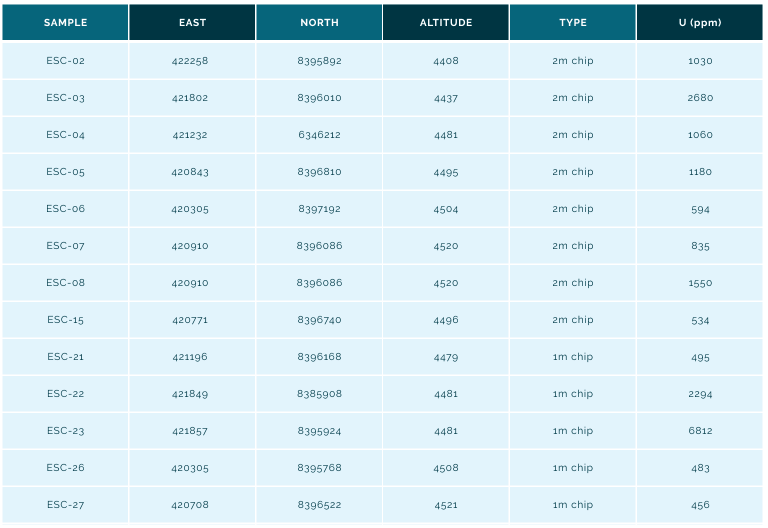 Currently, East Preston is where its at and will define the fortunes of Azincourt. Hopefully uranium will continue to climb as we search for a carbon-neutral form of base-load energy generation, fueling Azincourt’s efforts at East Preston.

Yes, it’s been a long and bumpy road for the junior explorer who presently has over 480 million common shares, 12.79 million options and 257.86 million common share purchase warrants from repeated equity raises. Still, the company reported $12-plus million in cash as of November 11, 2021, and approximately $22 million in equity if the warrants are exercised. So, it has gas in the tank for near-term exploration objectives.

Despite this, positive results leading to the identification of a deposit will provide the catalyst necessary for investors to feel more comfortable in continuing to buy into its uranium dream. East Preston has all the indicators of a good find, it just has to be found.

Admittedly, not a unique story for junior explorers, thus the inherent growth potential. Considering the market caps of the company’s peers operating in the Athabasca Basin, Azincourt is a steal at $0.07 per share and a $34.73 million market cap. The question comes down to belief and whether it outweighs the risk. Are you a believer? Don’t take my word for it, check out these other articles examining Azincourt and its potential at East Preston and then talk to an investment professional. For a technical breakdown of uranium and Azincourt, check out Vishal’s piece here.

If you’re a uranium bug with a love affair for the domestic safety and richness of the Athabasca Basin, you may want to take a quick look at Skyharbour Resources (SYH.V), a Canadian junior with a prolific uranium portfolio of 14 different properties in the Basin. All of which are drill ready for a total land package holding of 385,000 hectares. It’s 100% owned Moore Uranium Project located 15 kilometres east of Denison’s Wheeler River project and 39 kilometres south of Cameco’s McArthur River uranium mine. Moore is an advanced stage project with high-grade uranium mineralization with drill results showing up to 6.0% U3O8 over 5.9 metres including 20.8% U3O8 over 1.5 metres at a vertical depth of 265 metres. The company continues to advance its exploration work at Moore through further drill programs.