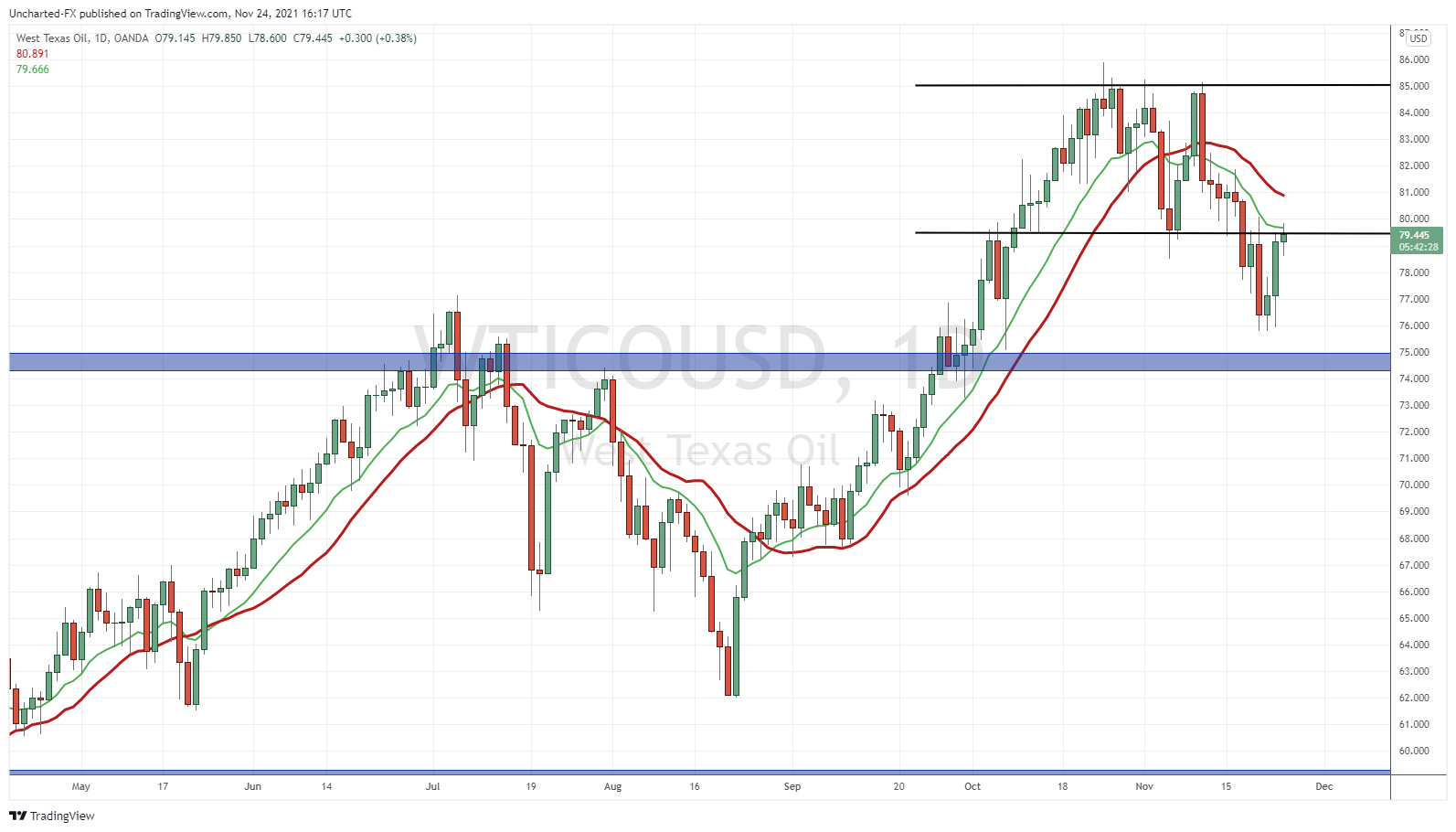 It’s been awhile since I spoke about Oil prices. My last post on the commodity detailed the technicals and why I expect HIGHER Oil prices. Interesting developments since then. And Oil prices test a pivotal level today. How we close before US Thanksgiving will go a long way in determining where we go next.

As you have seen from yesterday, Oil prices play a role in Stock Market strength. Not only are energy stocks impacted, but so are financials. The big banks, who were forced to lend to these Oil companies back when Oil prices cratered in 2014. Not loans they would usually make, but governments begged banks to do so in order to stave off large firings and a rising unemployment rate. Since that day, Oil and the Big Banks are connected.  When Oil prices are green, Energy and the Financials, two of the larger sectors in the Stock Market, play a role in propping up Market Indices as a whole.

When I think Oil, I look at the commodity currencies. The Canadian Loonie, the Russian Ruble, and the Norwegian Krone are my picks on Oil strength. Recent US Dollar strength is trumping the Oil correlation. These currencies continue to depreciate against the US Dollar, but are appreciating against other pairs (ie: AUDCAD, EURCAD, EURRUB etc). 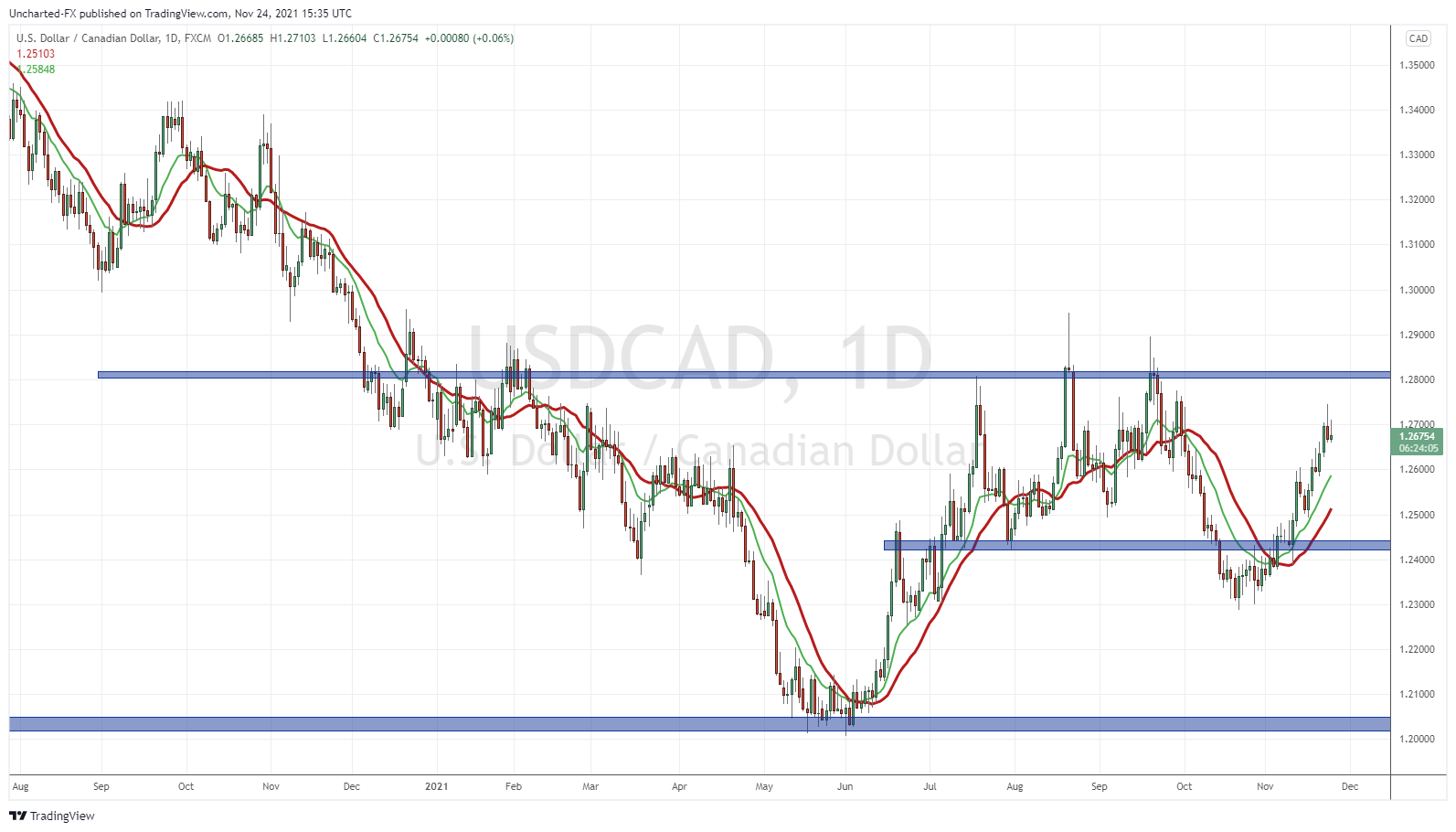 Because of this, I have begun to primarily just focus on Oil alone, and not the commodity currencies. I have spoken about the rising US Dollar many times. Warning the alarm bells beginning in June/July.

Higher Oil prices are playing a role in inflation. The inflation that is supposed to be ‘temporary’ continues to rise. The Fed blames supply chains. Most of us monetarists think it is because of money printing (more money competing for the same number of goods and services). Higher fuel prices continue to pinch the Middle Class, and if Oil continues to rise, people either will need to borrow more or will cut down on other spending. Over in China, we have seen recent moves by the CCP to bring down commodity prices. Government intervention to try to shift the trend on the charts.

Now it seems President Biden is attempting to do the same… and he may have initiated an Oil price war with OPEC.

Yesterday, to lower Oil prices, President Biden released millions of barrels of Oil reserves to try and cool down prices. Under the plan, the United States will release 50 million barrels, the equivalent of about two and a half days of U.S demand.

“I told you before that we’re going to take action on these problems. That’s exactly what we’re doing,” Biden said in remarks broadcast from the White House.

“It will take time, but before long you should see the price of gas drop where you fill up your tank, and in the longer-term we will reduce our reliance on oil as we shift to clean energy,” he said.

But the US is not alone. The Biden administration is coordinating with Japan, South Korea, China, India and the UK in releasing reserves to lower Oil prices.

India said it would release 5 million barrels, while Britain said it would allow the voluntary release of 1.5 million barrels of oil from privately held reserves. Japan will release “a few hundred thousand kilolitres” of oil from its national reserve, but the timing of the sale has not been decided. South Korea has said it would decide after discussions with the United States and other allies, but did not provide any details. China, the world’s largest crude importer, remains non-committal, though it has taken steps this year to cool price rises of other commodities in its domestic market. Beijing will release crude oil from its reserves according to its needs, said a foreign ministry spokesperson.

What you are seeing here folks is an alliance. These nations may not be allies and friends, but when it comes to lowering Oil prices, they are united against OPEC+. Yes, an Oil price war could be beginning.

President Biden asked OPEC+ to increase production to lower rising Oil prices. They declined. Generally, OPEC+ nations favor $70 a barrel Oil or higher. A few members of OPEC+ such as Russia and Iran have no interest in doing Biden or the US a favor. Saudi Arabia of course wants to maximize Oil profits. The million dollar question now is what will OPEC+ do? Will they produce more to lower prices? Or will OPEC+ want to teach Biden a lesson and cut its own supply, to keep prices up, or push them even higher?

Geopolitics folks. In my opinion it really is about Saudi Arabia and Russia. A few years ago, Putin was getting very cozy with Mohammed Bin Salman. I mean a whole meme was born out of it: 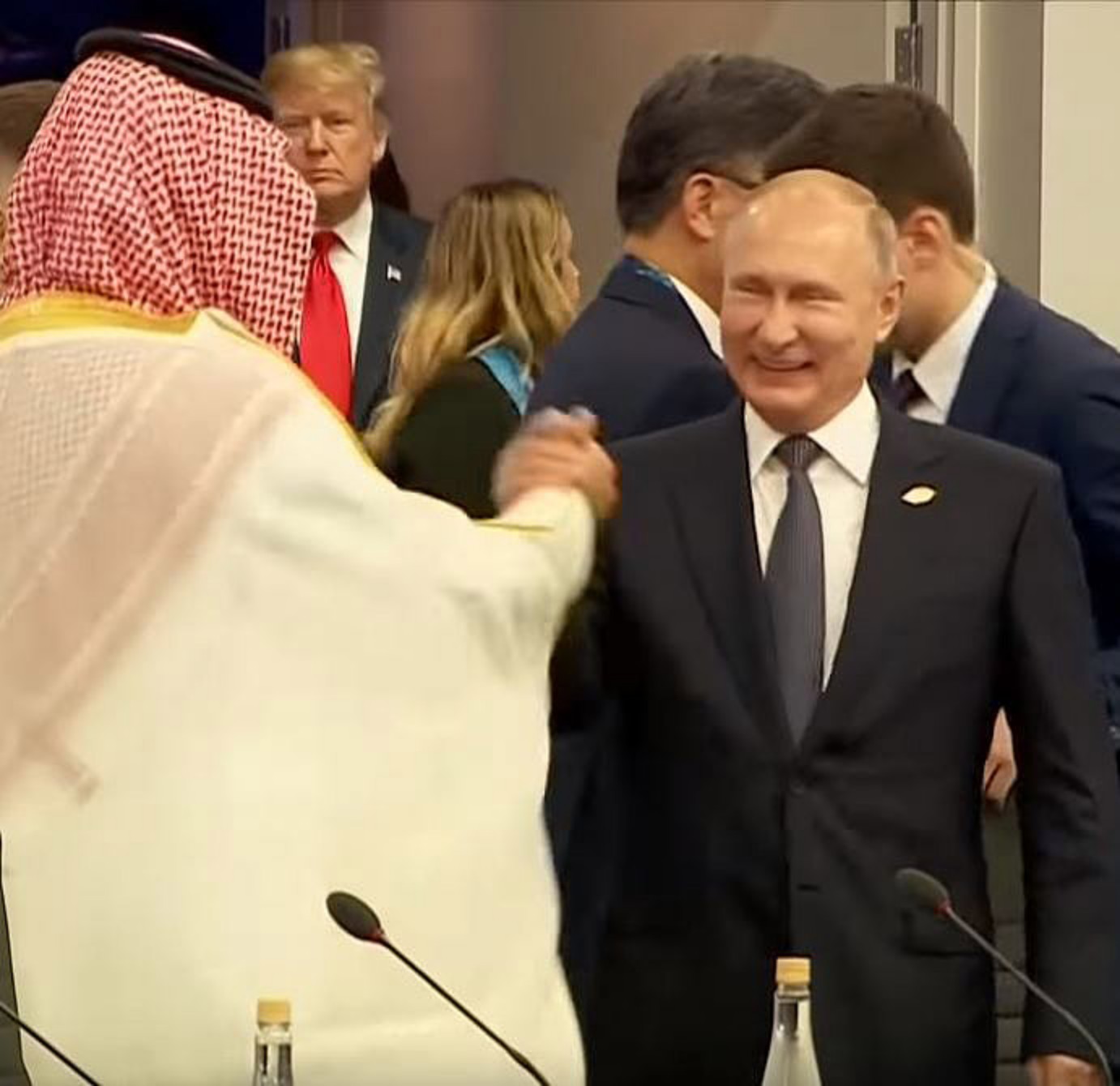 Saudi Arabia is pivotal in the US Dollar being the reserve currency. The petrodollar system. The US provides protection for Saudi Arabia as long as the Saudi’s take US Dollars for their Oil, and reinvest some of the profits back into the US. Some say Saudi Arabia holds the cards and runs the show. The US will look the other way when it comes to human rights, and the Saudi’s may even demand the US to do something about a rising Iran in the Middle East. Enter Putin and Russia. This is just speculation, but some speculate that Russia has offered the Saudi’s protection. Not only that, but Russia is an ally with Iran, and also has been fostering a good relationship with Israel. China reportedly might be involved. There were rumors that the Chinese would purchase a large stake in Aramco only if the Saudi’s dropped the US Dollar. Did not happen. But you need to think that if this OPEC war worsens, the Saudi’s may reconsider Russia’s offer. 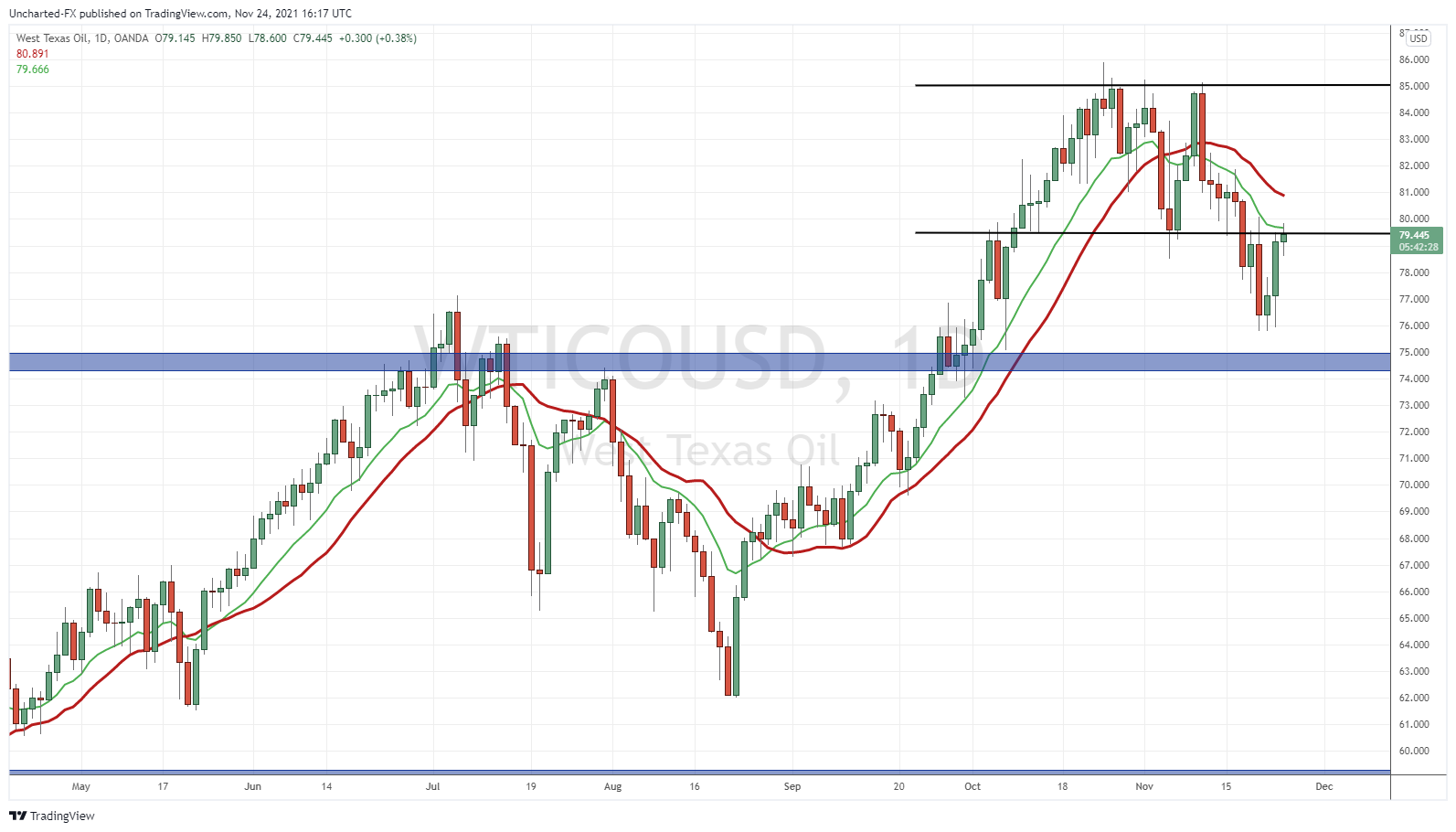 Above is the Oil chart. West Texas as a CFD. The structure looks the same as West Texas futures. Oil prices hit highs of $85 this year, and from there, we began to develop resistance. We attempted three times to break above but no luck. Instead, we triple topped. My interim support zone is $79.50. We broke below that on November 17th 2021, pulled back to retest, and then continued lower. To be honest, there is a lot of support around the $74-$76 level.

What I am watching is the current price action. We are back retesting $79.50 as resistance. A close above, and we print higher Oil prices. The opposite of what Team Biden wants. It should be noted that when Biden announced the release of reserves, Oil prices rose rather than declined.

Depending on how today’s candle closes, we will be able to predict the next move. Below resistance, I favor more downside. Perhaps we range here for a bit and make the move next week after Thanksgiving week and more liquidity comes back to the markets.