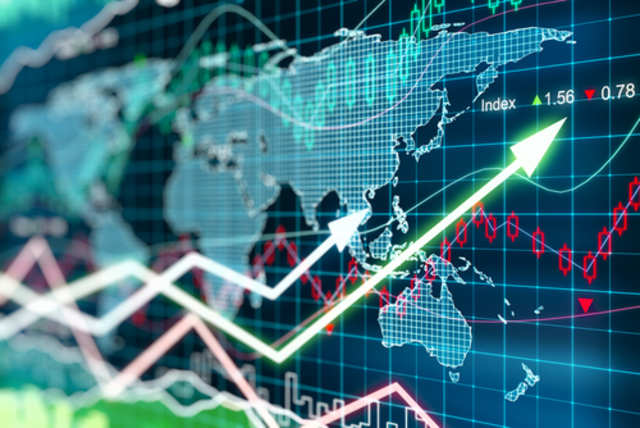 Here on Equity Guru, I talk a lot about the US Markets in my Market Moment posts. I mean you can’t blame me, they are the largest and see the most action. For someone like me who trades CFDs, trading indices is a great way to hedge longer term stock positions, or just trade and make bank. Very convenient one click in and one click out to enter and exit positions. I feel for my American friends who cannot trade CFDs, but have other options to trade indices. One word: futures. E mini S&P 500, Nasdaq and Dow futures are the most popular way to trade markets. When I worked on a prop trading floor, I just day traded E mini S&P 500 futures in and out, as well as Gold and Oil through ETFs: GLD and USO. But what I would give if my trading floor had access to CFDs back then. Access to world wide markets would be one click away.

In this post, I will go over some of the charts and fundamentals for Stock Markets outside of the US. But don’t worry, I will talk about US markets tomorrow before the big Fed meeting. I just think it is great for investors and traders to know what is happening on other Stock Market Indices. Maybe your next big trade or long term idea will come outside the US? In this investment world where some believe the US markets are over valued, then some other market indices *cough Europe cough* offer a bargain if they are to catch up.

As you can see from the data above, the top ten Stock Market moves YTD are all outside of the US.

Currently, the flow of money is something to keep in mind. Many analysts say the US is heading higher because money from Europe and Asia is running into the US markets. This means that Central Banks and Currencies become a hot topic. We have the Fed tomorrow, but the Reserve Bank of Australia was up yesterday, and we have the Bank of England up on Thursday. I’ll factor these things in when going over equity markets.

Let’s get straight into it! 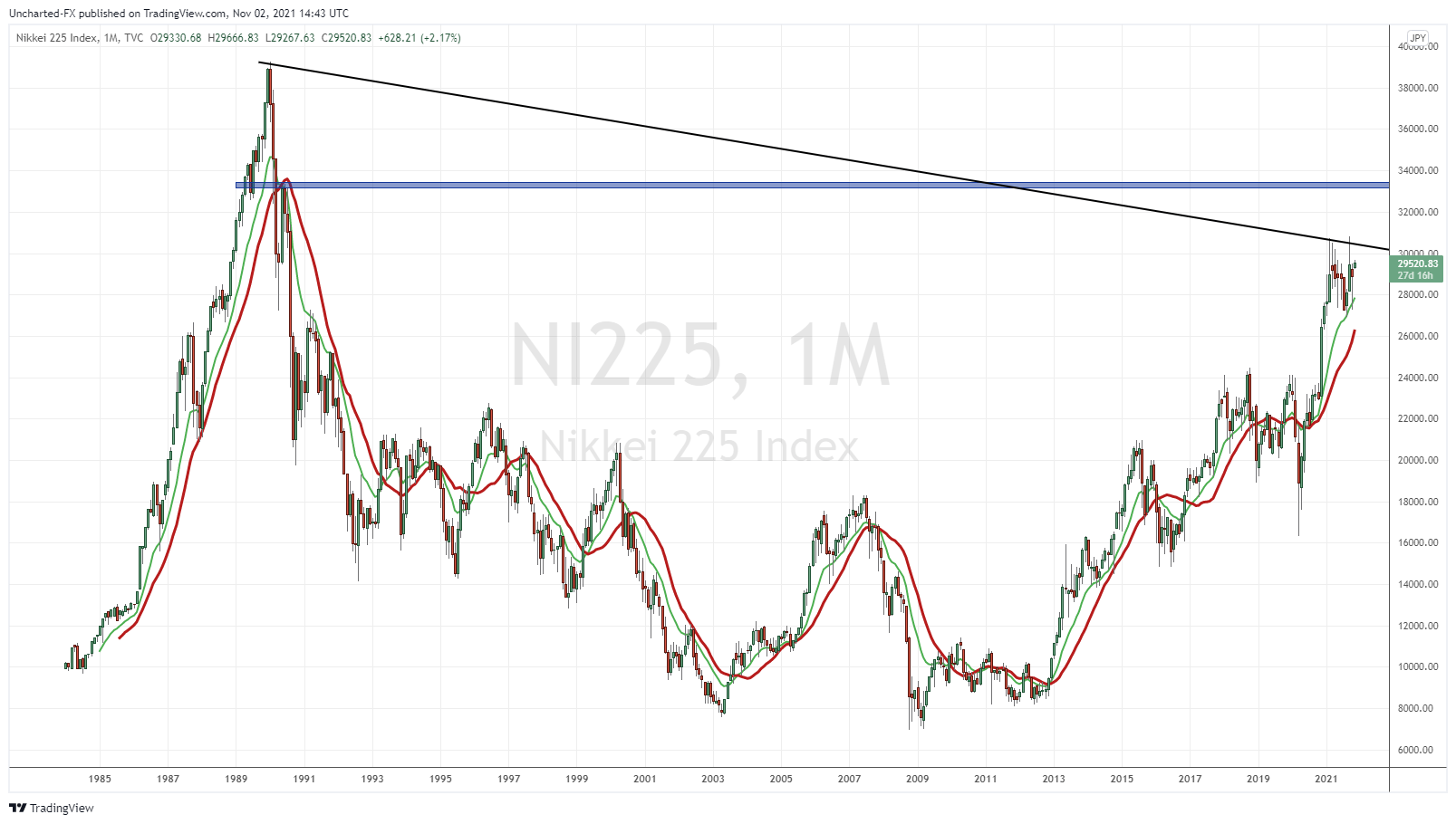 Perhaps one of my favorite markets, and really just economic topic is Japan. If you have not read about the Japanese economic boom, then I highly suggest you read about it! In case we see stagflation and deflation in the future, you will be prepared to offer your opinion when analysts and pundit heads say “Are we becoming Japan? Is Japan the best case scenarios for us?”. I can offer you some crazy stats such as the land of the Emperor’s palace was worth more than the entire state of California. One Tokyo block was worth more than the entire real estate of Canada. Even Toyota, the largest auto manufacturer in the world at the time, was trading the Nikkei because there was more money to be made in markets. Some draw parallels to Tesla purchasing Bitcoin as a sign of market exuberance like Japan.

In central bank terms, the Bank of Japan (BoJ) began doing Quantitative Easing back in the 80s before it was cool. They also were the first to go to negative interest rates. I believe they were the first to buy stocks and ETFs (it might have been Switzerland). The Bank of Japan owns 90% of all ETFs in Japan, but recently, the BoJ said they would back away from ETF purchases. But it has taken the Nikkei back to levels not seen since 1990! Levels not seen for 31 years! As Billionaire Jim Rogers says, and I am paraphrasing rather accurately here: “If the BoJ is buying Japanese Stocks, then I am buying the Japanese Market. You don’t bet against the Central Bank”. I am in the same boat.

We have all heard of Japanese companies. Honda, Toyota, Panasonic, Mitsubishi, Nikon, Canon, Sony, Nintendo just to name a few. Some of them are traded on US exchanges, but many remain in Japan only. The Nikkei is the only way to gain exposure to them. The most appealing part of the Nikkei is that it seems like a huge value market. Japanese companies have been around for decades, have little or no debt, pay dividends, and are run quite well. The Japanese Yen is also seen as a safe haven which is backed by the stability of the country politically, and by the high savings rate of its people. 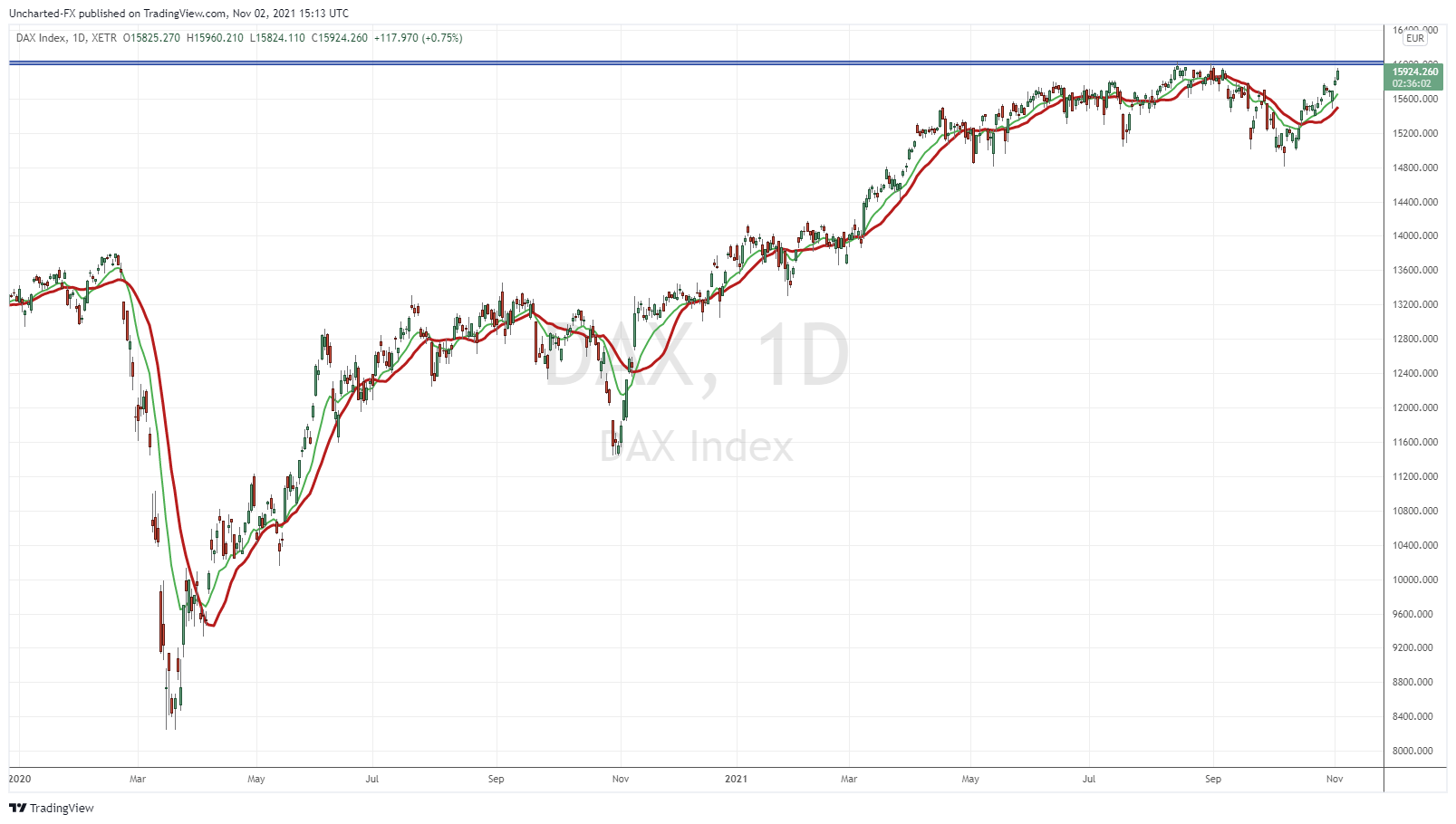 When I think of Europe, the first market that comes to mind is the German Dax. Germany is known for its manufacturing and exports. I know you all are thinking cars (maybe Hugo Boss too) but the top 10 exports from Germany includes vehicles, machinery, chemical goods, electronic products, electrical equipment, pharmaceuticals, transport equipment, basic metals, food products, and rubber and plastics.

When you think of the European Union and the European Central Bank (ECB), many think of Germany being the key cog. The Bundesbank is known for its prudent monetary policy, and some say it’s no mistake that the ECB is located near the Bundesbank in Frankfurt. Some blame Germany for the Euro problems, as Germany favors a weaker Euro to boost exports. This was a talking point during the Greece fiasco, and still goes on today. But I guess it is better to point fingers at someone else. When it comes to bailing out other Euro countries, Germany tends to not do it as it would fall on the Germany taxpayer to bail out the rest of Europe.

Some people like to look at Europe as a basket case, but I like Germany. In terms of banking, they have a lot of community banks that can only lend in certain districts. It is how banking was supposed to be. About lending money to small businesses. A bankers job is to lend money to a business only if it has a prudent business plan. Politically, let’s see what happens. German Chancellor Merkel was in power for quite sometime, and she provided nice stability. Future politicians might be a bit less interested in Germany’s role in the European Union.

Germany also has a lot of Billionaires who remain under the radar compared to Billionaires of other countries. For those interested in the secret, I mean discreet lives of German Billionaires, check this documentary out:

When it comes to European markets in general, it will be all about the ECB and if it tapers. Let’s be honest, just like Japan, the ECB likely cannot increase interest rates. Rate hikes would break governments who have had to spend a lot and racked up the debt. Some argue this is the case for the US and other western nations too.

But the German Dax is one of the European markets to make new record highs back in February, and continues to make record highs. It has been moving like US markets. We now find ourselves ranging at the bit 16,000 zone. A breakout takes us into new record highs, but let’s be a bit cautious as the Dax has been ranging here for since April 2021. 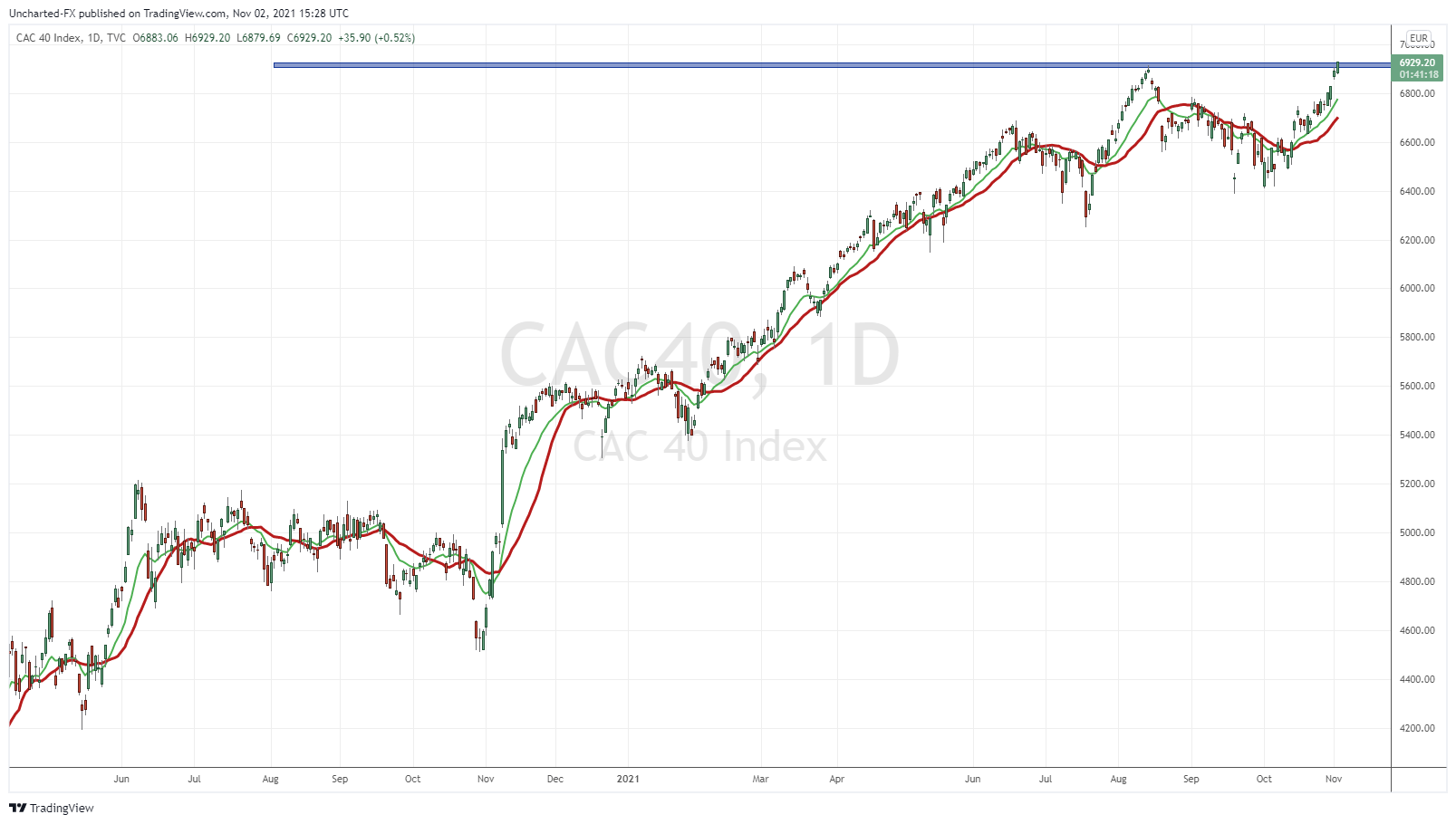 Not to be outdone by Germany, the French CAC 40 is looking bullish. In fact, as I am typing, new record highs are printing! Le jour de gloire est arrivé! Well actually it arrived back in April 2021 as the CAC 40 joined the Dax and US markets into making new record highs.

Recent news saw the French economy roaring back to life. France’s economy grew a faster-than-expected 3% in the third quarter, preliminary data showed on Friday, propelled by a pick-up in consumer spending and exports as the euro zone’s number two economy rebounds from the COVID-19 pandemic. 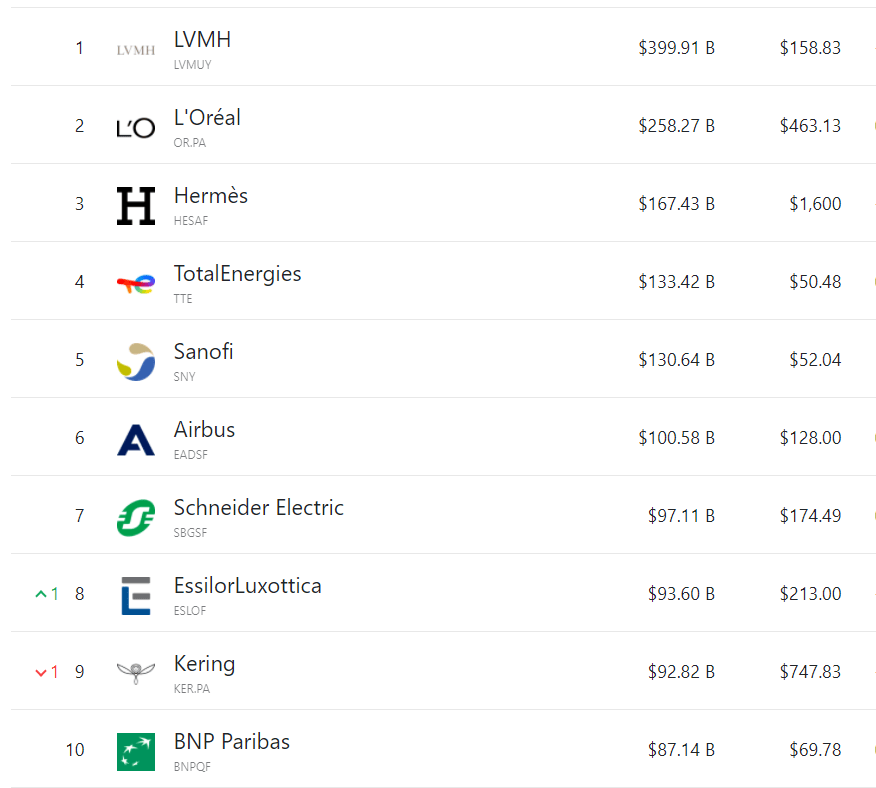 Honestly, it looks like we just ride the CAC just like the Dax and US markets. New highs until Central Bank policies become less accommodating or a Black Swan Event takes place. 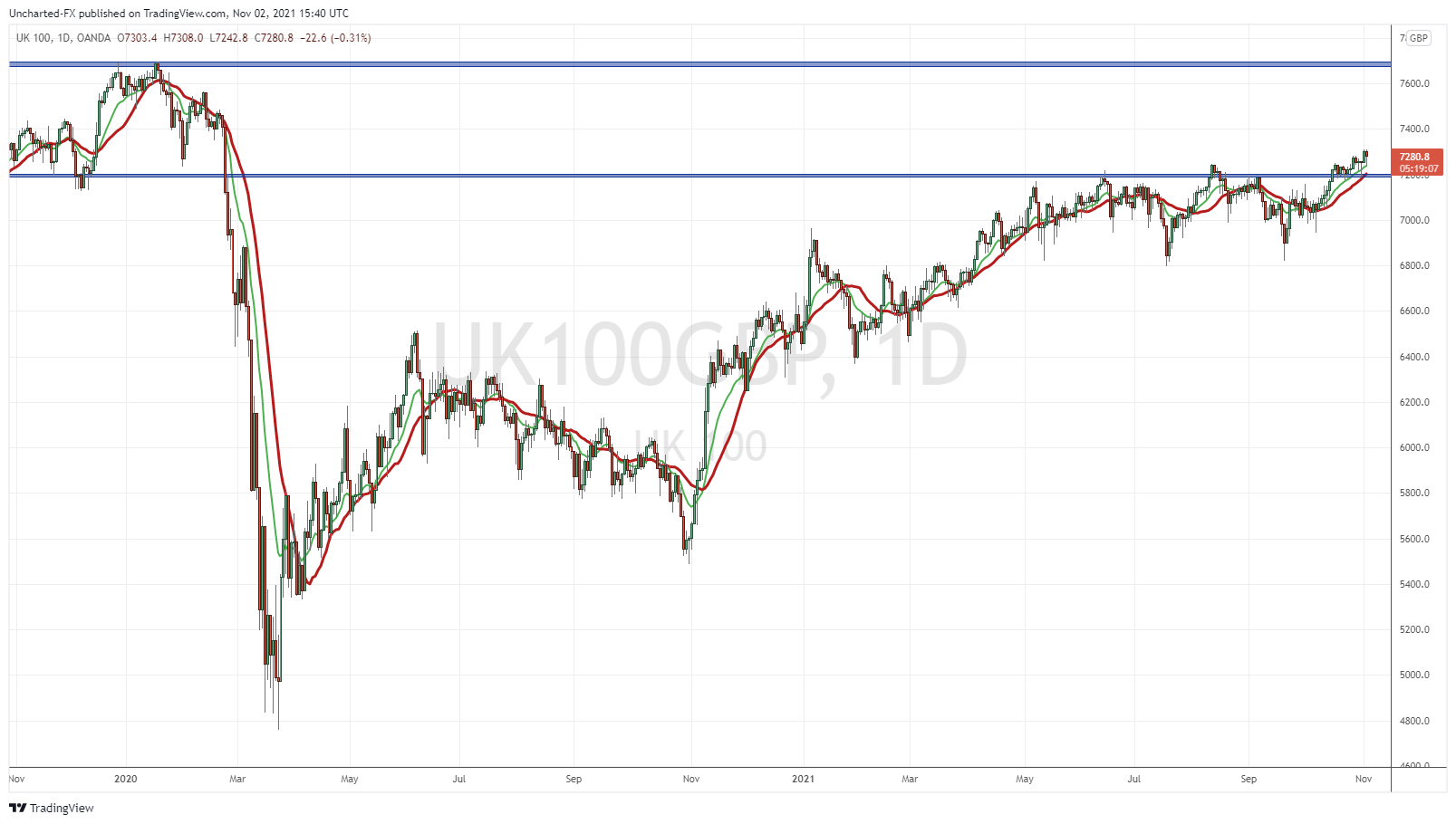 The UK FTSE Market is the first European index which I would consider as still ‘cheap’ compared to other markets. The UK has not made new record highs like the US markets, Canada, and other European Markets. In fact it has a lot of room to the upside before printing new record highs. If money is chasing markets because of central bank policies and chasing yield, then I expect the UK FTSE to attract a bid. If not, then it is because investors are still nervous about the Brexit implications, and want to see how the UK economy copes. We have seen some worrying instances already with a CO2 shortage in the UK as well as Gas.

The Bank of England is up on Thursday. Investors and analysts are expecting a hawkish central bank. In fact, the market is pricing in a 15 basis point rate hike…while maintaining a tapering program. Sends a bit of a confusing message to investors, but we shall see if this unfolds. The FTSE may be the first market to give us some insight on how markets will react to a hawkish Central Bank! But technically, I like the recent breakout! 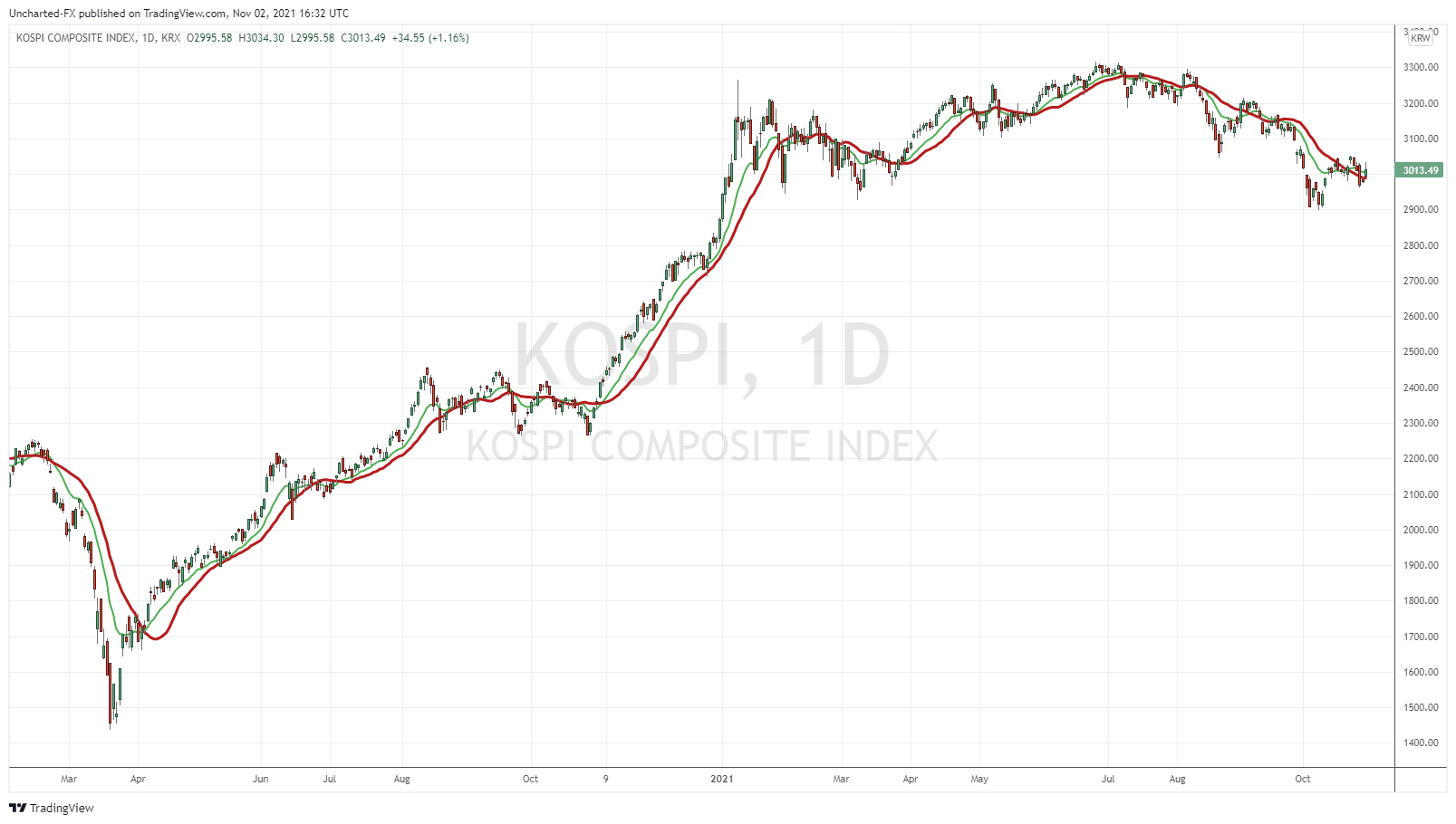 To end off, I want to highlight the South Korean Stock Market, or the KOSPI. South Korea has been in the news recently…more on the cultural side of things after the popularity of Squid Game. As someone who has been watching K drama’s for years, the hype is real. I’m not saying people watching K Drama’s are going to randomly begin investing into South Korea, but I think it is a watershed moment. Netflix is increasing its allocated budget for South Korean produced content. Coupang, recently IPO’d in the US, and Bill Gates has bought a lot of shares. Trust me, you will hear more about South Korea in the upcoming months on financial media channels.

Company wise you have probably heard of a lot of South Korean giants. Samsung, LG, Kia, Hyundai to name a few.

This is where things become more interesting though. The KOSPI chart looks ready to roll over. After a nice uptrend this year, we finally began to turn. It almost looks like a broad head and shoulders pattern. Now is it because of a global economic concern? Or is it because of central bank monetary policy?

South Korea cut rates down to lows like the majority of the world. But in August of 2021, the South Korean Central Bank was the first major central bank to raise rates. They did so by 25 basis points, taking rates from 0.50% to 0.75%. Ever since that rate hike in August, the KOSPI broke down and began drifting lower…maybe signs of what is to come for other stock markets.

Recently, the South Korean Central Bank has held rates at 0.75%, but inflationary pressures are increasing the chances of another hike. Consumer inflation in South Korea has hit 10 year highs, with the markets now betting on another rate hike by the end of this year. They have also had to adjust their rate hike timeline to combat inflation.

I hope my readers found this post knowledgeable and fun. I really get a kick out of investing and looking at other markets. It changes things up after looking at US markets on a daily basis. With tapering and rate hikes to comes, I think the UK FTSE and the Korean KOSPI are great examples. The KOSPI began selling off as soon as the first rate hike occurred. The central bank is also likely to increase the speed of hikes to combat inflation. On the US side, inflation is still seen as transitory, even though higher prices are likely to last around mid 2022. If they don’t, then pressures to hike interest rates increase to combat this inflation, which could be getting worse. Judging by the price action on the KOSPI, US markets may fall under pressure. So a big week with rate decisions in Australia, the US and the UK this week. As central banks turn hawkish, will their actions lead to stock markets giving up their cheap money gains? South Korea says yes.