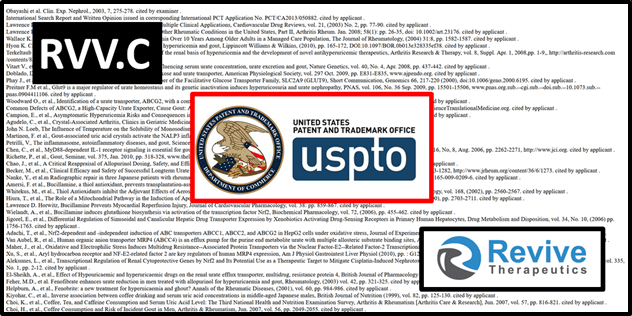 Revive Therapeutics (RVV.C) is a specialty life sciences company focused on the research and development of therapeutics for medical needs and rare disorders.

“We are proud of the IP portfolio that we’ve generated,” stated Michael Frank, CEO of Revive in an exclusive interview with Equity Guru, “We have a number of rich key patents and a lot of good provisional patents.”

“Our team understands how to work through the clinical path,” added Frank, “We’re doing a lot of it in the US. A lot of our psychedelic work, and early formulation delivery work, was done at University of Wisconsin”.

The technical language on a typical U.S. patent application makes use of complicated language.

“It has been reported previously that fenofibrate has a rapid urate-lowering effect in patients with hyperuricaemia and gout being treated with allopurinol..sup.34,” states RVV’s Patent US9662305, “Fenofibrate increases renal uric acid clearance…etc”.

The complexity of the scientific jargon causes most retail investor to tune out.

However, make no mistake, patent-protection is the foundation of future revenue generation. 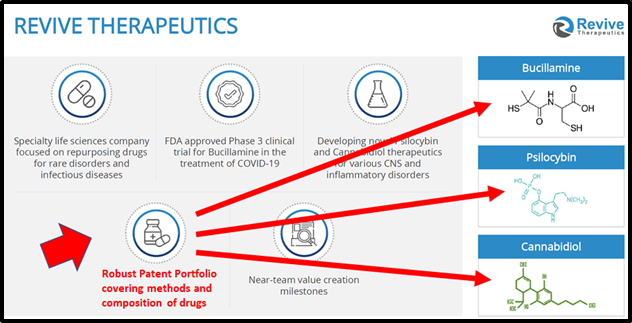 In 1962, Nick Holonyak Jr. invented the LED Bulb – didn’t bother getting a patent – and never made a penny from his invention.

Prior to the mid-18th century, inventors were afraid to publish their discoveries. This created an innovation gridlock.

“The U.S. Patent Office offered a simple solution,” states 2innovative, “An inventor discloses his/her idea publicly and is given a 20 year monopoly on their idea”.

“This instantly leveled the playing field. The little guy could do business with the big corporations,” added 2innovative, “The most common use of patents, still to this day, is for negotiating royalties with other companies”.

“For a patent to be granted, the invention must be novel in the sense that it is new,” states the BBC, “That means it had not been made public ahead of the date the patent was filed”.

“The inventive step involved must not be ‘obvious’ to a skilled person in the area,” adds the BBC.

RVV has “an impressive list of provisional patents filed, which could be extremely valuable in the long term,” wrote Equity Guru’s Taylor Gavinchuck on February 2, 2021.

“Some of these include: 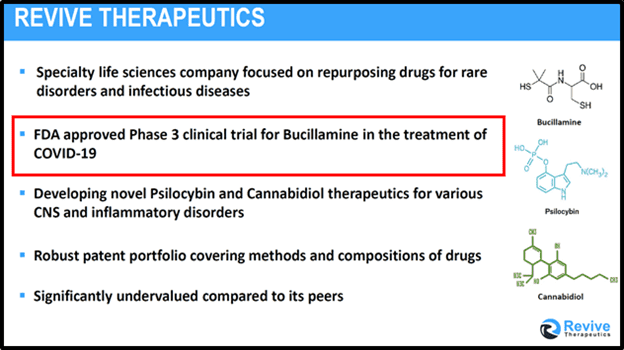 Revive has identified bucillamine as a useful therapeutic in the treatment of COVID-19.

On March 24, 2021, Revive updated shareholders on its FDA Phase 3 clinical trial to evaluate the safety and efficacy of Bucillamine in patients with mild to moderate COVID-19.

Revive has partnered with over 30 clinical sites in a variety of states including California, Florida, Illinois, Nevada, North Carolina and Texas and is now expanding to up to 50 clinical sites within the current states and in COVID-19 hot spot areas such as Massachusetts, Michigan, New Jersey, New York, Pennsylvania, and South Carolina.

To date, no serious adverse events or safety concerns that required the Independent Data and Safety Monitoring Board (DSMB) to be notified or take action on.

RVV is on track to meet its planned enrollment goal for the study completing in Q3-2021.

The company has approached the FDA to obtain agreement on the potential for filing an Emergency Use Authorization (EUA) application, while the study is ongoing, so as to receive EUA approval prior to the completion of the study.

“We are making good progress both on enrollment and expansion of clinical sites in hot spot areas in the U.S. and we are positioned well to explore strategic initiatives in completing the Phase 3 study as well as seeking a path forward for EUA approval from the FDA,” confirmed Frank. 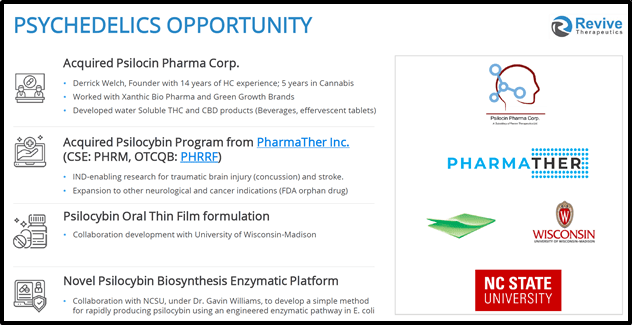 “Revive is developing new delivery systems for psilocybin, while also studying the effects of psilocybin on traumatic brain injury (TBI),” reports Equity Guru’s Taylor Gavinchuck on June 18, 2021, “Revive has applied for orphan drug status, which the company has gotten twice through its cannabinoids pharmaceuticals program.

On June 17, 2021, RVV announced they have entered into an agreement with the University of Health Sciences Antigua (UHSA) to collaborate with Revive on their novel psychedelic-assisted therapies and pioneering the clinical research and development of psychedelics in Antigua and Barbuda.

“The collaboration has a number of goals,” stated Equity Guru’s Piers Eaton, “including the establishment of a psychedelic treatment center in Antigua and Barbuda using Revive’s novel psychedelic formulations and delivery systems.

“This will include Revive’s proprietary oral-thin film (OTF) delivery system, which dissolves in water in less than five minutes, with dosages between 1 mg and 20 mg. OFT delivery allows better dosage control and can deliver the psilocybin faster, as well as helping those who have trouble swallowing take the drug.

The partnership will lead to the establishment of a Master’s in Psychedelic Medicine for Doctor of Medicine students at UHSA, allowing students to gain more knowledge and experience in the field.

As part of the collaboration, UHSA will exclusively use Revive’s intellectual property for research, and eventually Revive hopes that this will provide a foundation for further novel psychedelic therapy research and commercial use in Antigua and Barbuda.” – End of Eaton. 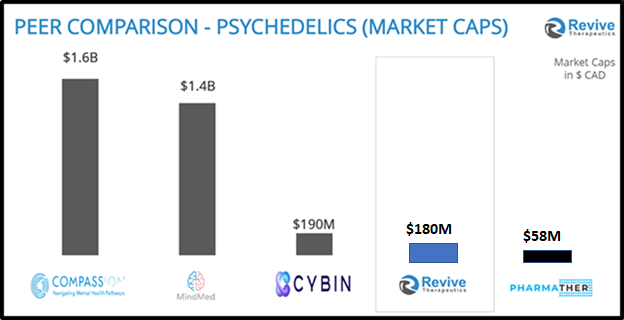 “Our psychedelics patent portfolio is strong,” confirms Derrick Welsh, Founder and COO of Psilocin Pharma – a subsidiary of RVV – in an exclusive interview with Equity Guru, “We’ve recently applied for orphan drug designation for the work we’ve done with brain injury and stroke.”

“We had some very favorable results come back from Taiwan from the institute of health care,” adds Welsh, “And these guys are working on two more modules for us. We’re waiting to get those results back.”

“The psychedelics component of what we’re doing is next level,” states Welsh, “We’ve got a clinic starting in Antigua, which is going to be run by physicians and some of the best medical students in the world”.

“I think of them as the Harvard of the Caribbean,” adds Welsh, “It’s a great partnership that’s enabled us to invest resources in our technology. It hasn’t cost us any money to do business in Antigua. They like our technology. They like what Revive is doing. They’re willing to give us access to patients. This is a big step forward for Revive.”

Welsh worked in the rehabilitative space for 10 years, with concussion patients and brain injury patients.

“There is no pill for these patients,” stated Welsh, “No relief for brain fog. Currently, the medical community really has nothing to give them.”

Welsh explained that one medical hypothesis around psilocybin is that it is able to help generate new neurological connections.

Welsh believes that part of the strength of Revive is that the company is streamlined and nimble. 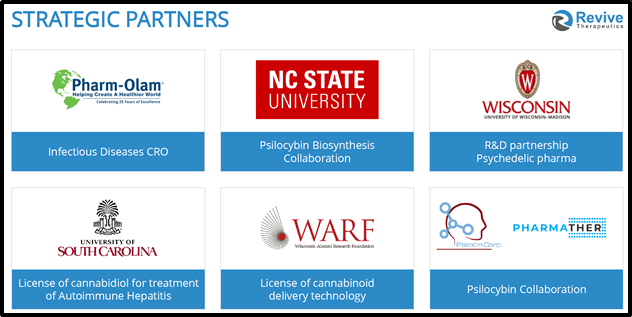 “It’s a unique opportunity to be standing on the forefront of a new frontier,” added Welsh about psylocibin, “With favorable clinical results and a model that will allow us to transition to orphan drug designation, the path for Revive is well positioned.”

“There are few companies in the world holding Phase 3 covid trials, worth less than $500 million,” stated Frank, “That’s the reality, and appealing for Revive investors. This pandemic – and its mutations and possible others need therapeutics.”

“In his less than two years as CEO, Frank is succeeding at improving the company’s coffers and prospects,” reported Biospace on June 16, 2021, “He has taken Revive Therapeutics from a $1.4 million CAD company to one worth more than $150 million CAD, and recently raised $25 million CAD a few months ago”.