Yellen says Higher Interest Rates would be good, does the Market Buy it?

Inflation talk is putting some pressure on Stock Markets this morning. With the Federal Reserve Interest Rate Decision next week Wednesday, traders are placing bets on whether the Fed adapts a more hawkish (tapering and raising rates) tone, or keep policies unchanged. I still go with the latter.

Markets some what mixed at time of writing. We saw a big flush on the intraday charts.

Everything I said in yesterday’s Market Moment remains valid for this week. I would not be surprised if Markets range until we get CPI inflation data on Thursday. Very similar to last week, where Markets ranged but then popped when US employment, NFP, data missed expectations. Traders began betting that the Fed keeps policies unchanged at their next meeting. The excuse will be that the economy hasn’t strengthened just yet, so we have not talked about tapering.

Get used to hearing all the headlines about inflation for the next months…maybe even years. In predicting what the Fed will do, you sometimes have to ignore the mainstream financial media. They mimic the Fed and call this inflation ‘transitory’, blaming it on higher Oil prices, just as I said they would over a month ago.

The truth is, inflation will worsen, but many think the Fed will not be able to raise rates due to all the debt out there, and that a hike would cause stocks to drop. A taper tantrum.

CNBC is already beginning to put out how the Fed will attempt to avoid a taper tantrum by easing market sentiment to accept tapering. Give the market a timeline.

Behind the glacial pace of reducing asset purchases is a deliberate attempt to avoid another so-called taper tantrum, the sharp spike in bond yields in 2013 that came after Fed Chairman Ben Bernanke hinted asset purchases could wind down. One view inside the Fed is that the taper tantrum occurred because it failed to adequately separate in the market’s mind the timelines for hiking interest rates and for reducing asset purchases. This time, the Fed is creating a long runway for tapering, making clear that rate increases only come after this process. It also has set a higher standard of economic improvement required for rate increases than it has for asset purchase reduction.

In other news, Treasury Secretary Janet Yellen came out saying that higher interest rates would be good for the US. She said this while encouraging more government spending.

“If we ended up with a slightly higher interest rate environment it would actually be a plus for society’s point of view and the Fed’s point of view,” Yellen told Bloomberg.

“We’ve been fighting inflation that’s too low and interest rates that are too low now for a decade,” she said. She added that if the packages help at all to “alleviate things then that’s not a bad thing — that’s a good thing.”

Did the markets buy it? Nope. An easy way to tell was to look at the US Dollar. 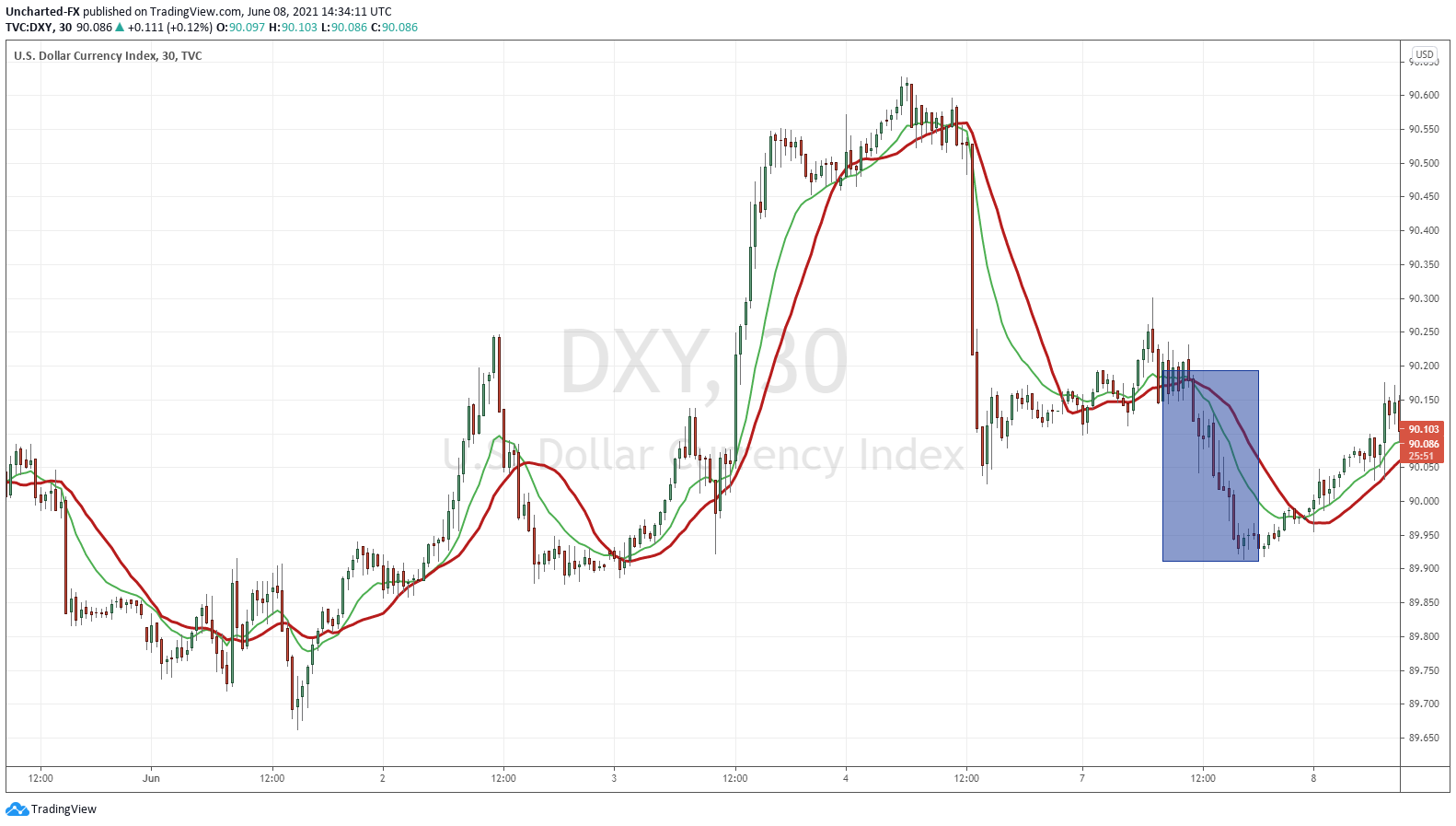 If the market was expecting higher interest rates, we would expect to see the US Dollar rise. Based on interest rate differentials especially in these macro conditions.

The Dollar actually slightly rose today, but it turns out we may be seeing a move into risk off before the big Fed meeting next week. This is what I am watching: 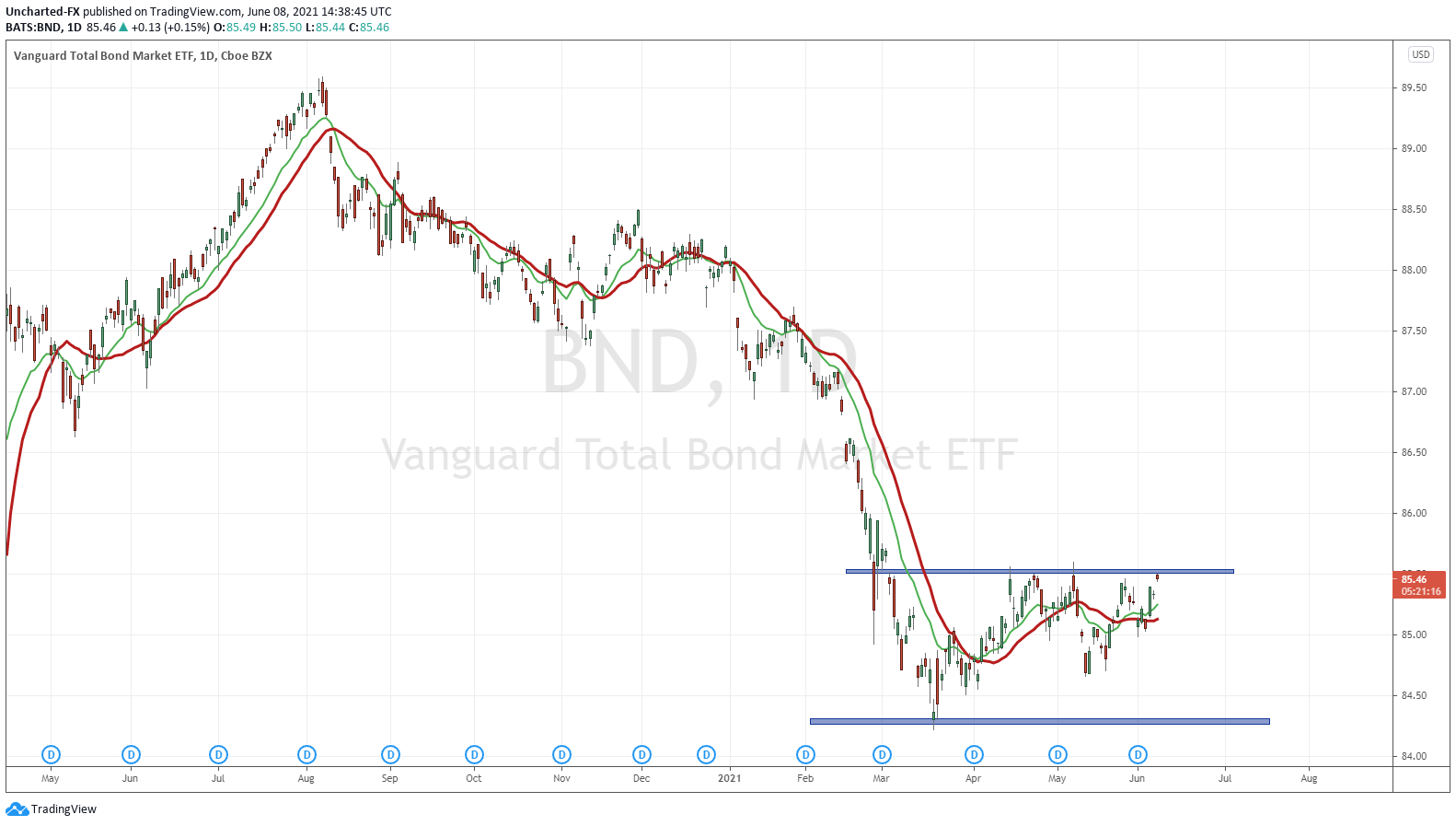 Bond ETF BND meeting many of our market structure criteria…

BND is the type of chart pattern I like to trade. We have had a downtrend, we began to range, and now a breakout to trigger an uptrend looks likely. When money runs into bonds, adhering to the asset allocation model, we expect to see money leaving stocks for bonds. Or maybe the Fed has more to say about this since they purchase $80 Billion worth of bonds per month. 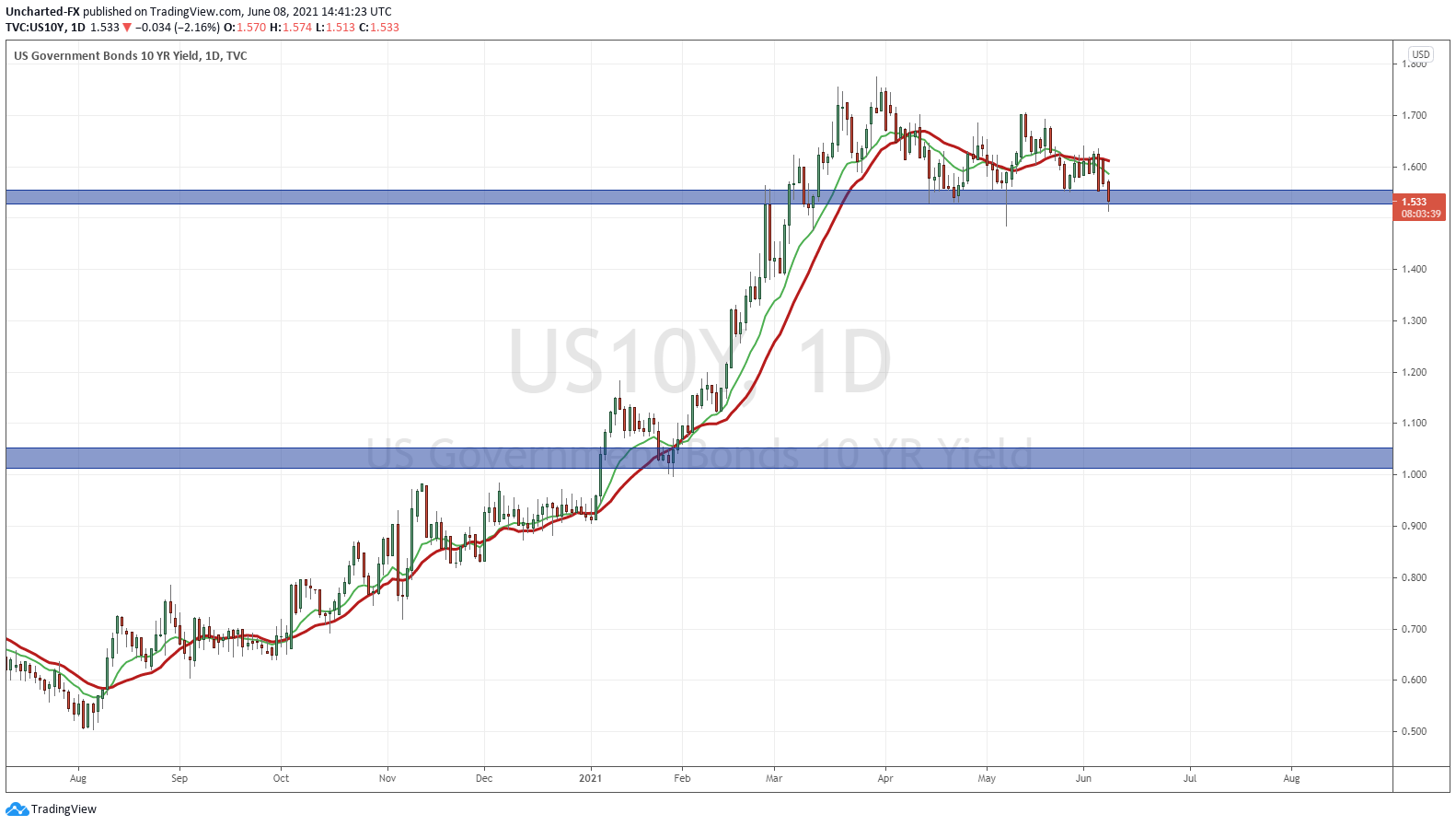 When bonds move higher, it means that YIELDS are moving lower. An inverse correlation. The 10 year yield is back retesting out 1.50% zone. A break below would mean a breakout in bonds (BND ETF). Somewhat worrying because it would mean a risk off environment. If the US Dollar keeps rising while Bonds do the same, it confirms this.

On a final note, I have said it is great to buy bonds. Not for their yield, but for trading them off for capital appreciation. If you buy a bond right now, you will be able to sell it for more later. Why? Because I expect interest rates to be much lower. So once again, if Yellen is saying higher rates would be great, the Bond market is not falling for it as well.