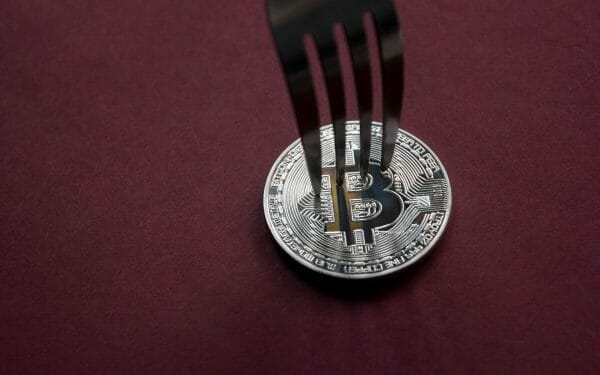 Most of the folks into crypto I know aren’t interested in the price. If you ask them if they know how Bitcoin’s doing, they’ll shrug their shoulders and continue stuffing tacos in their face. They know that a certain amount of money from their bi-weekly checks are being set aside to go into their crypto of choice. Usually Bitcoin and Litecoin.

When it’s down they buy more. When it’s up they buy less. It’s not a speculative investment for them. They’re not going to pull it out when it gets beyond a certain threshold or panic and withdraw if it drops. It’s a peculiar kind of faith that I do not share and apparently I’m not alone. When the bitcoin bull came to an end halfway through last month, dropping 32.9% in the past thirty days, companies relying on Bitcoin’s continued providence followed suit.

For example, we have Marathon Digital Holdings (MARA.Q), one of the biggest Bitcoin miners operating in the North American space, which dropped half of its market cap, dropping from an April 5th close of $56.26 at the height of the bull run to a $19.66 bottom in the first two weeks of May before rebounding to where they are today at $25.20. 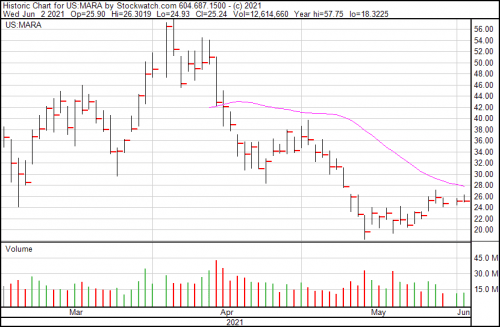 If you build it…

In the depths of the crypto-winter, select blockchain and crypto companies kept building and it worked out for them in the long run. When the winter thaw came and eyes in important places started looking once again to Bitcoin and crypto, most companies enjoyed a sweet bounce and a new resistance point. Marathon seems to be moving in that direction.

“In May, we produced 226.6 bitcoins, which is a 40% increase from the 162.1 bitcoins we produced in April, and we increased our hashrate to 1.9 EH/s after installing another 5,571 miners. As a result, we were producing nearly 10 bitcoins per day on average at the end of the month. Given our current delivery schedule and the macro events affecting the global network hashrate, Marathon is particularly well positioned to scale and thrive in the current mining environment. Delivery and installation of new miners continue to progress well, and we remain on track to meet our objectives of transitioning our operations to 70% carbon neutral and having all our previously purchased miners online by the end of the first quarter of next year,” said Fred Thiel, Marathon’s CEO.

Yesterday, Bitmain delivered 6,809 S-19 Pro ASIC miners to the company’s Hardin, MT mining facility—on time and as scheduled. They had installed 5,571 new miners in May, increasing their fleet to 17,655 miners and their hashrate to 1.9 EH/s.

Marapool and the Taproot soft fork

This is the latest update to the Bitcoin client software and the biggest since 2017’s Segregated Witness (SegWit) fork. Regular maintenance duties, including upgrades and fixes, fall to a large open-source developer community. The latest update contains some interesting features, including the Taproot soft fork, which is designed to protect privacy, improve scalability, and do the prep-work for future enhancements. Also, if you’re not sure about the difference between a hard fork and a soft fork, then we’ve got you covered.

Regardless, here’s an explanatory paragraph from the official release.

“If activated, these improvements will allow users of single-signature scripts, multisignature scripts, and complex contracts to all use identical-appearing commitments that enhance their privacy and the fungibility of all bitcoins. Spenders will enjoy lower fees and the ability to resolve many multisig scripts and complex contracts with the same efficiency, low fees, and large anonymity set as single-sig users. Taproot and schnorr also include efficiency improvements for full nodes such as the ability to batch signature verification. Together, the improvements lay the groundwork for future potential upgrades that may improve efficiency, privacy, and fungibility further.”

The idea for the Taproot soft fork goes back to 2018, and was brought up by Gregory Maxwell, a Bitcoin Core (BTC) contributor, and former chief technology officer at blockchain tech company Blockstream. It’s expected to boost Bitcoin’s smart contract abilities and boost user privacy. The soft fork will happen in November if it gets 90% miner support before the August 11 due date through the block creation process. So far—no dice.

Marathon will provide support without modification and the MaraPool will no longer filter transactions as a result. When the update’s completed, the pool will re-start validating transactions just like other miners using the standard node.

Whether or not the Taproot soft fork will make much of a difference in the long run given that Bitcoin’s trajectory is largely ruled by external forces, such as China and whatever comes out of Elon Musk’s twitter account, is up for debate. As when the hype dies down and the market chills out, it’ll be interesting to see who remains standing.