After taking out multiple zones of resistance—$1800, the 200 SMA, a downtrend line that’s been in force for months, $1900—Gold has been stair-stepping higher and it looks like it wants to go higher still…

You don’t need to be a TA highbrow to see $1950 as the next stop—the next zone of resistance.

With mounting inflationary pressures underpinning much of the metal’s recent strength, the question on the minds of many: Is there enough momentum to launch an assault on $2,067—the (all time) highs printed last summer—before 2021 is done?

I believe the answer is “yes”, obviously, but that high ground likely won’t fall without a fight. Fortunately, or unfortunately, depending on whether your cattle or contrarian, there are a number of catalysts in the offing that could trigger such a rush.

As funds continue to exit the crypto arena in search of a more tried and tested safe-haven asset, analysts are (again) trotting out their decidedly lofty price projections for the metal. For example, Incrementum AG, in its 15th annual In Gold We Trust report, sees $10k by the end of the decade. Guggenheim’s CIO Scott Minerd sees $5k to $10k. Frank Holmes sees $4k within three years.

Where our junior exploration stocks are concerned, there’s been a dramatic shift in sentiment in recent weeks. Have you noticed? The market now answers a good set of drill hole assays with strong bids, positive price trajectory, and record volume. If you’ve been around this sector for more than a few years, you know this hasn’t always been the case.

One of the brighter examples of this buoyancy is Arizona Metals (AMC.V). A pic is worth ten yards…

This is the kind of trajectory we’re all looking for in this Wild West of an arena.

If we truly are in the early stages of an epic bull run in all things metals and mining, AMC’s price action, even after printing multi-bagger gains, is very likely just getting started.

Aside from being a tightly-run entity with tremendous resource expansion and exploration upside, the Company is a top-shelf takeover target IMO. There are a lot of resource-hungry predators about—Producers desperate to bulk up their mineral inventories (project pipelines made lean by a brutal bear market that dominated the previous decade). 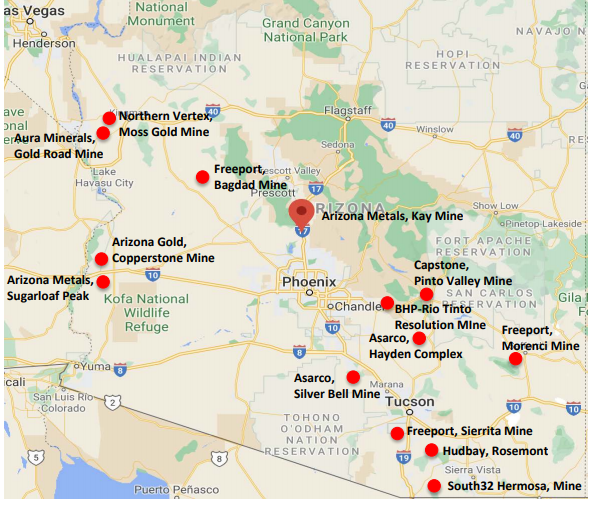 According to the Fraser Institute, a highly regarded think-tank that analyses jurisdictional risk, Arizona ranks number two on its Investment Attractiveness Index.

Note the untested (lateral) targets bookending the historic 1.5 million ounce resource to the northeast and southeast (map below)… 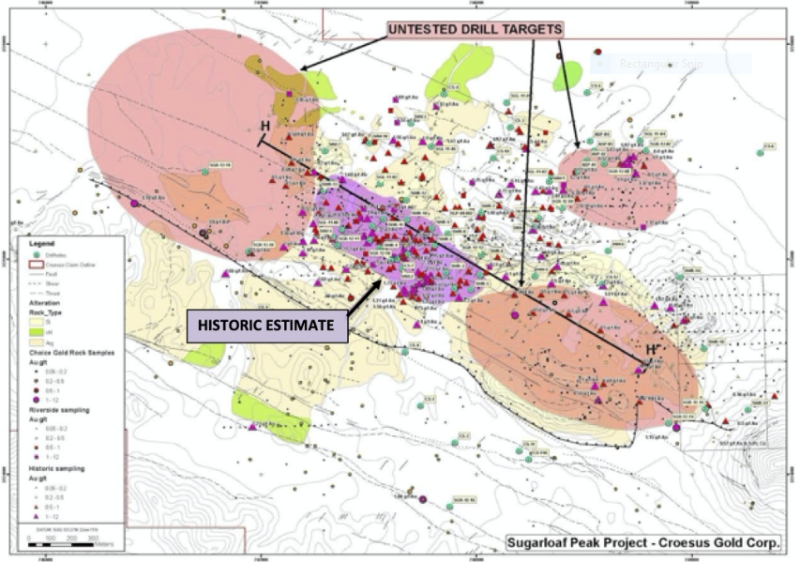 “The Sugarloaf Peak property is located in the Jurassic magmatic arc complex of west-central Arizona, an extensive belt of Lower- to Middle-Jurassic metavolcanics and related plutons. Host rocks in the project area are known as the Dome Rock igneous suite, a sequence of 158-200 Ma metavolcanics, their volcaniclastic equivalents, coeval intrusions, and minor metasediments. Regional structure and tectonics include the Precambrian Goodman Fault zone, which shows a pronounced bifurcation into six strands on the project, four Mesozoic deformational events of both compressional an extensional nature, as well as Tertiary Basin- Range faulting. The project occurs in a region of large gold deposits (Mesquite, California, and Copperstone, Arizona) and a number of smaller mineral occurrences in the Dome Rock Mountains.”

The grade is sub-one-gram, but the mineralization lies near surface—from 0 to 70 meters depth. And as highlighted above, there’s ample opportunity to grow this ounce count.

The Company launched a drill program last summer to get a better fix on recovery rates, as well as to probe an untested geophysical target at depth.

Good metallurgy will be the key to success at Sugarloaf Peak.

Metallurgy is the one aspect of exploration and development that can trump all others combined. Very simply, metallurgy is the science (some prefer the word ‘art’) of extracting valuable metals from their ores and modifying said metals for their intended use.

Initial metallurgical (bottle roll) testing by Kinross (K.T) and Agnico Eagle (AEM.T) in 2009 and 2013 achieved gold recoveries of up to 73% (in line with heap-leach mines currently in operation).

Here, the Company announced that its recent metallurgical testwork demonstrates gold recoveries averaging 76%, from surface to approximately 111 meters, with the oxidized zones reaching recoveries of up to 95%.

Highlights from this Metallurgical Testwork:

Two of the drill holes completed in the 2020 drilling campaign—SP-20-01 and SP-20-02—first underwent detailed hydrothermal alteration analyses. Composite samples were then submitted to Kappes Cassiday and Associates for metallurgical testing. Table 1 in this June 1st press release details these results. Column testing is currently underway on additional samples from these holes. Results expected in Q4 of 2021. 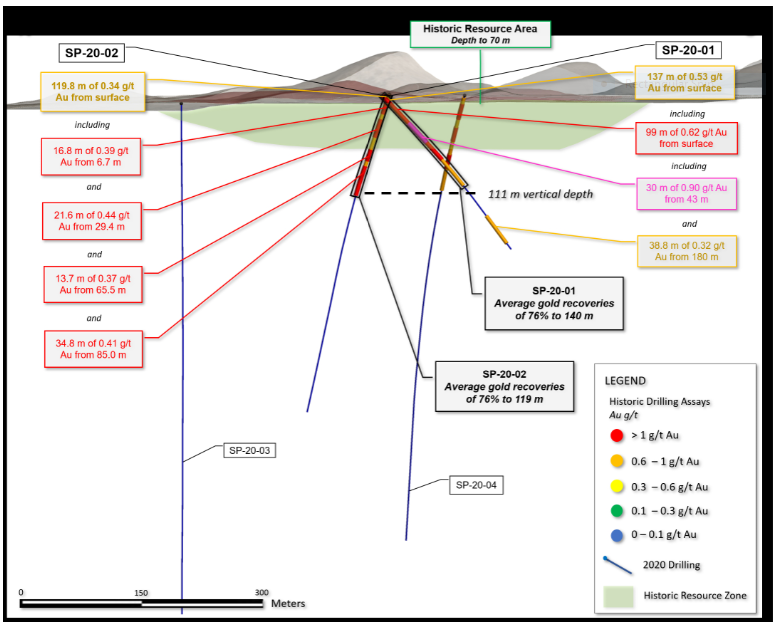 Demonstrating these kinds of recovery rates is a major milestone for the Company.

“Today’s results have demonstrated the potential for excellent gold recoveries, at depths well below the historic resource estimate, which was defined down to only 70 m. We note that gold recoveries average 76%, which compares very favourably to similar heap-leach deposits currently in operation. Importantly, we observe excellent recoveries in both oxide and sulphide mineralization, indicating that the gold is not refractory. We also note that our recent drilling has shown that mineralization can continue well below the 111 m depth of this metallurgical testing, with hole SP-20-01 intersecting 38.8 m of 0.32 g/t, from 127 m to 155 m, more than twice the historic estimate depth. Based on the success of these initial tests, we plan to undertake additional metallurgical testing on deeper mineralization. Reagent consumption was also typical of rates observed in producing mines. This initial metallurgical work indicates excellent potential to recover both sulphide and oxide material in deeper mineralization, with the deposit also remaining open for expansion on strike to both the northwest and southeast.”

It’s going to require additional infill drilling to bump these 1.5 million ounces into 43-101 compliance. But at the same time, the global resource at Sugarloaf could increase markedly.

Just speculation on my part, but against the enormity of the Company’s flagship Kay Mine Project, in order to unlock a proper valuation for Sugarloaf Peak, we could see the project spun off to shareholders at some point.

The Company also gave us a Kay Mine Project update in this June 1st press release:

Drilling at the fully-funded 75,000m Kay Mine Phase 2 program is underway with two drills turning and assays pending. The Company will provide an update on the timing of the additions of a third and fourth rig in a future release.

2021 will continue to be a busy one for Arizona Metals as the Kay Mine Project is soon to be accelerated with four drill rigs. Expect robust assay-related newsflow over the balance of 2021 and beyond.