For the last few months, the conversation around Intema Solutions (ITM.V) has gone something like this: 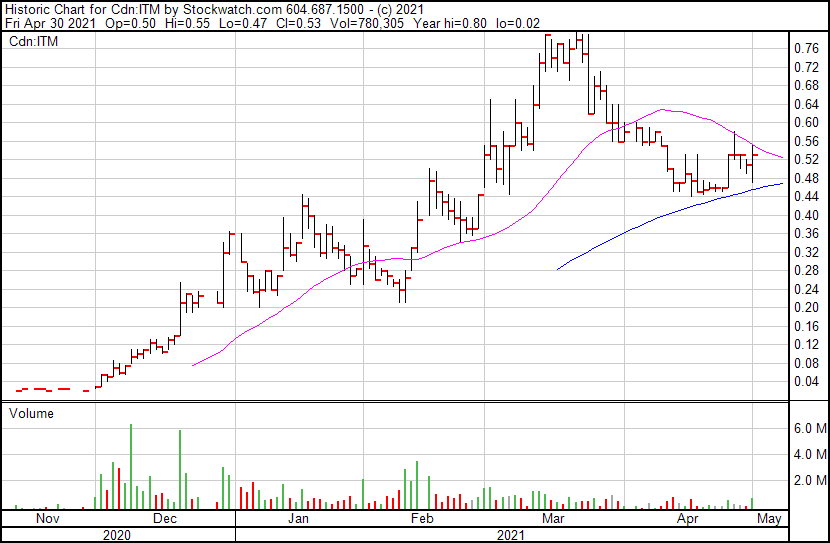 Yes, the stock has been walking up, $0.04 to $0.52 in five months is decent business, but it hasn’t gone bonkers just yet. Nobody out there in hype land is yelling Intema’s name, for two reasons.

That changed this week.

Intema halted the stock and then announced a deal that, all by itself, should be enough to launch this puppy into satellite flight paths.

Intema Solutions Inc. has entered into an arm’s-length binding letter of intent (LOI) dated April 30, 2021, with Livestream Gaming Ltd. with respect to a proposed transaction, whereby Intema will acquire all of the issued and outstanding securities in the capital of Livestream. Livestream is a private, Cyprus-based corporation that owns Loot.Bet, a Curacao-licensed, server-based, real-money gaming platform and a top brand in the world of e-sports betting.

We’ve seen a fair number of public companies tossing around claims that they’re going to penetrate the online gaming/gambling space, and most are being extremely generous with their own press. But Loot.Net is a legitimate name in this space that has sponsored e-sports tourneys, has a decent reputation in terms of odds offered and sports/e-sports covered, and brings in a little dough.

[Loot.Bet] is a regular sponsor of notable professional tournaments and teams, and a partner of leading e-sports operators, studios and bright e-sports talents/influencers.

Last year, the company made around US $4.8 million in revenues, which was good for a small profit. Money earned in online gaming is routinely shoveled back into marketing and user acquisition so there’s no point worrying about EBITDA just yet, but for the understanding the company isn’t bleeding cash.

What I love about the deal stems from what I see when I visit the site: 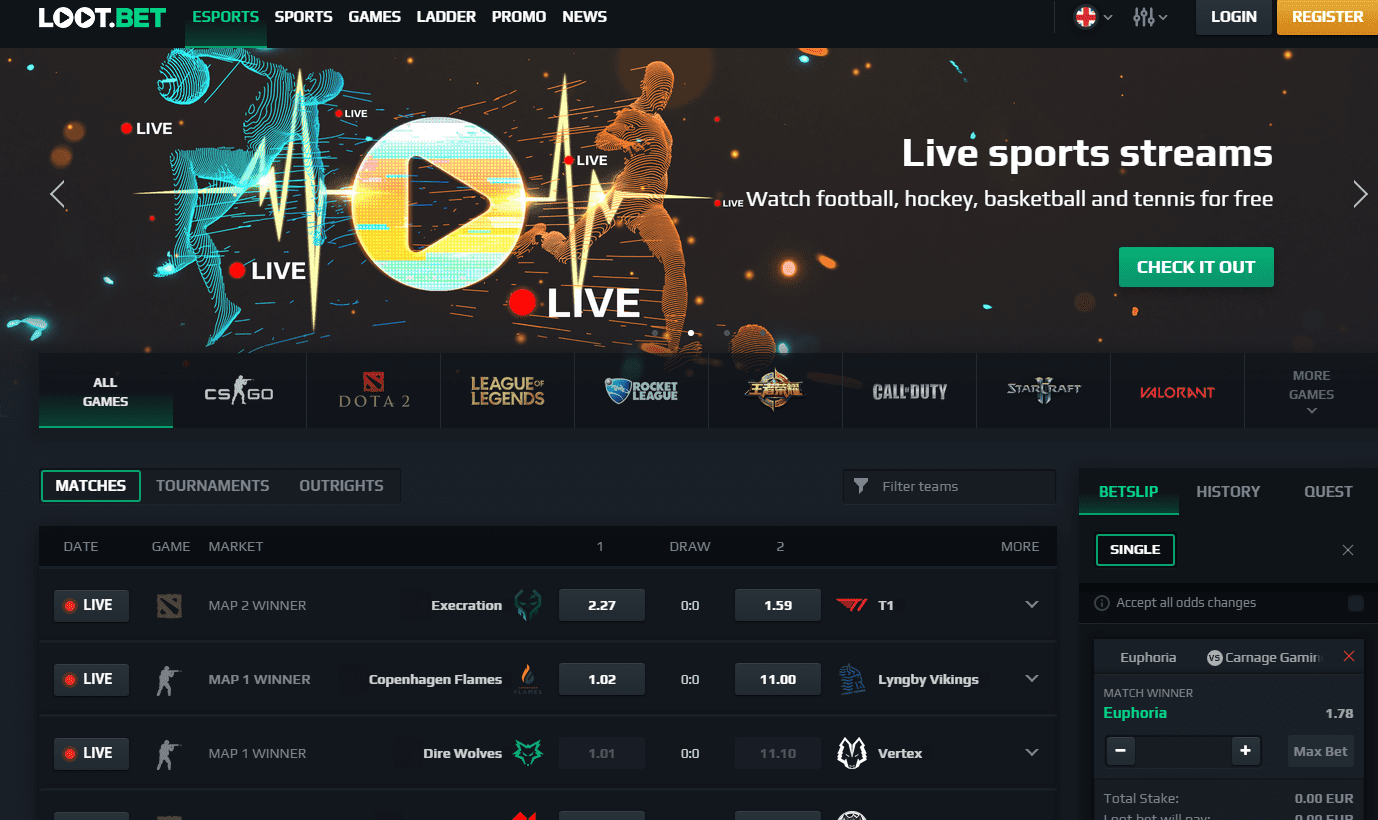 No marketing faff, no pop-ups, just right into the latest odds for a CS:GO tournament upcoming.

If you push deeper, the range of games covered is impressive. Everything from unheralded South American Rocket League tourneys to the big Asian and North American League of Legends, Call of Duty, Valorant, Hearthstone, and DOTA events, as well as coverage for more obscure stuff like King of Glory, Starcraft 2, and Arena of Valor – and sports sims like FIFA, NBA 2K, and EA NHL.

That’s all cool, and fills a growing niche, but in between maps the restless gambler can ramble across to the sports betting side of things and that’s where it gets real.

Sure, you can bet on Premier League football games, but you can also take in the Vanarama Non-League National games, where our very own Equity.Guru part-owned Altrincham FC will be battling the Eastleigh Spitfires in a few hours.

Alty look good for a flutter here, if I’m honest.

If that’s not obscure enough for you, you can take a gamble on the Australian Queensland Womens Premier League, or the Russian Night Hockey League where the ‘Ghostbusters’ are heavily favoured against Rospressa, or maybe you have a hunch on the Polish University Volleyball League, or today’s action in the Czech Setka Cup of Table Tennis, or Icelandic Womens Handball. Maybe Japanese League 2 Division 3 basketball?

The point here is Loot.Bet is active and detailed and doing business no matter where a gambler wants to find action.

In addition, the number of betting options on each sport/game can be impressive. Betting site reviews of Loot.bet talk about this as a major plus.

“The average CSGO contest features well over a dozen different betting markets [..] For example, a Counter Strike clash in the ECS EU Challenger Cup allowed you to wager on the overall match winner, map winner, first pistol round winner, second pistol round winner, total number of rounds, best of three correct score, or you could even try some handicap betting.”

“The sheer quantity of betting markets doesn’t just apply to prematch bets. Loot.bet served up over a dozen in-play betting markets for a CSGO match in the DreamHack Masters, and they are one of the best esports betting sites in this regard.”

This is a legitimate asset Intema has purchased, and they’ve taken it down for $14.75 million, give or take a little if the company hits certain milestones, and a bit more in terms of capital Intema will provide for running costs.

(iii) $2.75-million payable through the issuance of Intema common shares, issued at a per-share price equal to the five-day volume-weighted average trading price of the shares on the TSX Venture Exchange, as of the date of signing of the definitive agreement.

So let’s get back to one of the big question marks around Intema, and that was ‘the plan.’

Early on, it appeared the company was collecting odd bits of tech startups – an e-sports lean to be sure, but the cohesive story wasn’t obvious to any but those with an imagination.

“Loot.Bet will be a significant part of our ecosystem,” says Laurent Benezra, president and chief executive officer of Intema. “[That ecosystem] now consists of not only e-sports betting, but also peer-to-peer gaming, e-sports tournaments, and advertising through HypeX.gg, Advertiise and TheSmack.gg. All are complementary drivers of our future revenue growth. We are excited to have these companies and their experienced teams within our family. We are now focusing on closing these transactions so that we can offer the best experience possible through fully licensed, safe and secure on-line platforms.”

They have an extensive gaming platform, an ad agency to monetize page views, a marketing agency to bring in e-sports specific partners, an e-sports tournament platform to attract new enthusiasts, and enough cash rolling in to be a significant player as North American markets continue to open up.

This is real, and it has come together at a very reasonable capital cost at a time in our history where governments are loosening regulations on the gaming world. There’s money to be had, a gold rush is taking place, and Intema just took a forward position.