What a week for cryptocurrency. Interest in the digital asset is arguably at all time highs with the Coinbase IPO, Bitcoin and Ethereum hitting new record highs, the crypto market cap topping $2 Trillion, big pops in XRP and other alt coins, and Dogecoin surpassing a $50 Billion Market cap at one point.

Let’s not forget almost every corporation cashing in on NFT’s, and now the rising interest of Decentralized Finance or DeFi. DeFi is what I am watching and you can read my thoughts on why here.

Everything looked great for the cryptocurrency market. And then this happened over the weekend: 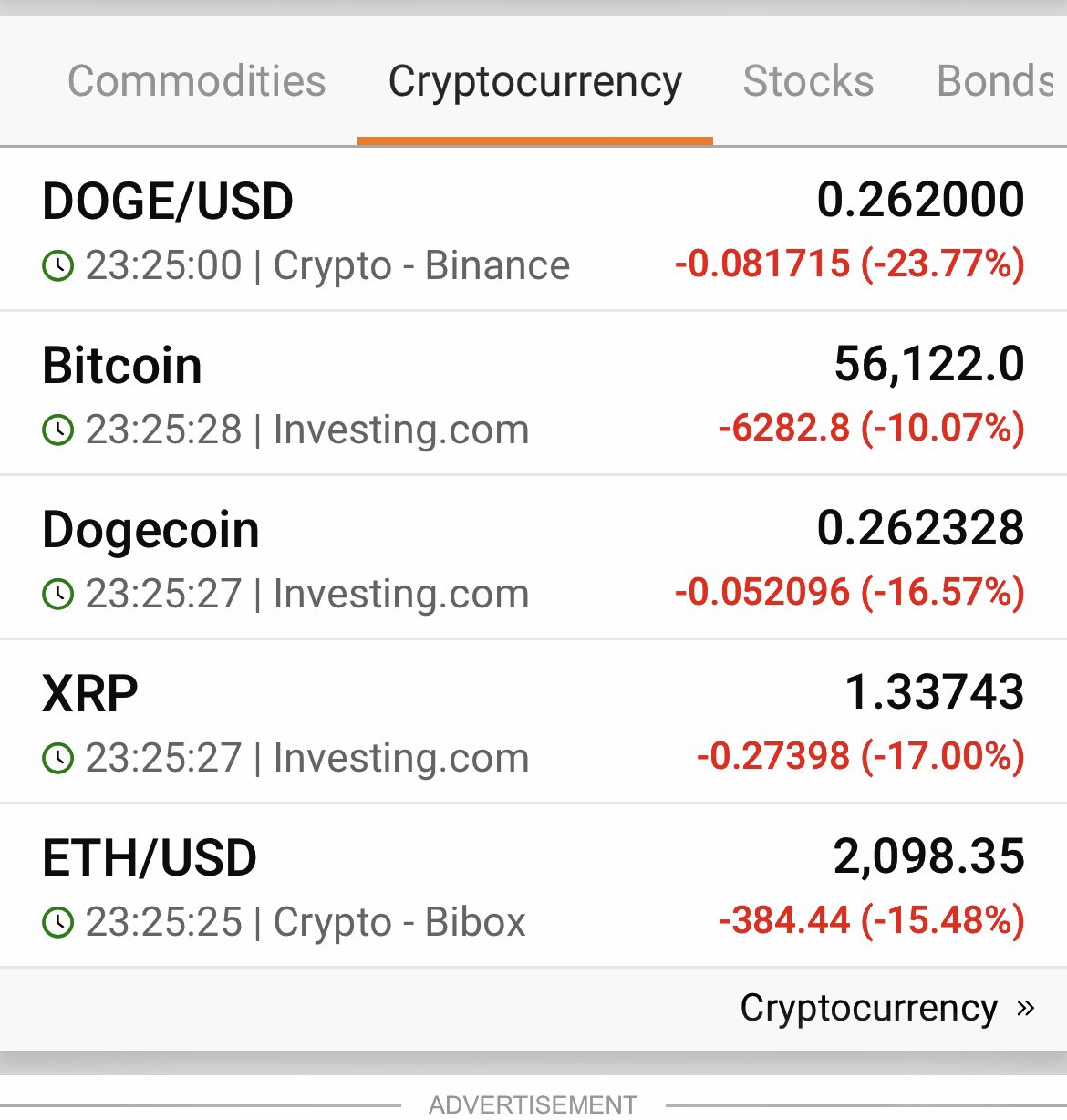 Bitcoin saw a dramatic $10,000 flash crash early on Sunday morning. Triggering over $10 billion in liquidations over the last 24 hours.

This was just the beginning, as even Bitcoin and other crypto’s would be down over 20%. We will look at what this means when we break down the charts.

Before we talk about why this happened, there is a major point to make. The anti crypto crowd are back, stating a drop of 20% is why crypto’s cannot be money. I agree with them. If Bitcoin and other crypto’s are moving higher, why would you even use it as money? It doesn’t make sense, and ironically, I have shifted my stance on crypto’s being a safe haven, or a different asset class, rather than being money. This ties in to the FUD.

So the major rumor over the weekend, that was supposedly the cause of this cryptocurrency crash, was the SEC and the Treasury considering regulations and a possible crackdown on Bitcoin because it is being used for illegal transactions.

Once again not confirmed, just unconfirmed speculation, but definitely is FUD (fear, uncertainty and doubt). Crackdowns on Bitcoin have been mentioned many times in the past, but has not happened.

In my opinion the reason is simple: US $100 Dollar Bills is the currency of choice for illegal and illicit transactions.

As long as cryptocurrencies are predominately traded, I don’t think there will be an issue. But if crypto’s are being pushed for major and consistent transactions, that’s when the problems will rise. Because then, crypto’s are a threat to the central banks who control the monopoly of printing money. The central banks will win. We also know a central bank digital currency (CBDC) is going to be released. That will be the crypto you will be forced to use for transactions.

Ray Dalio is someone you should pay attention to, and he has warned of some sort of Bitcoin ban because investing in it would deter money away from Stocks and Bonds. He likens it to the US government banning ownership of Gold in the 30’s up to the 70’s in order to prevent money from running into a safety asset which defers money from flowing into productive measures.

Dalio mentions India as the country to watch for the direction of future bans on cryptocurrency trading and mining.

Regulations is a whole different story. They are 100% guaranteed, but as I have said, this would be BULLISH crypto’s. Regulations means depositor insurance, which means Wall Street and institutions can hold crypto coins and token without fear of exchanges being shut down and the owners running away with your money. But this would mean big corporations, big institutions, and big banks get involved which is contrary to the original ethos of Bitcoin and most crypto’s: decentralized and away from the big boys. Hence why I have a close eye on DeFi.

Could this be the end of a cryptocurrency bull market? The charts right now are saying no, but this could change depending on supports being taken out. My base case for cryptocurrency remain the same: a way out of fiat currency knowing the actions central banks are going to be taking.

Bitcoin holding support at 50,000, but could potentially print a reversal for cryptocurrency

Let’s start with Bitcoin. After printing new record highs, Bitcoin failed to gain momentum and then dropped. A move from $60,000 to $50,000 in a single day. The levels we are watching are self-explanatory. Currently, Bitcoin is in no man’s land. We either await for a close above $63,000 for more momentum higher, or a break below $50,000 for another leg lower.

$50,000 is now an important psychological support zone. We have seen buyers step in to defend it. This open’s up a possibility to buy at $50,000 support if one likes. I prefer breakouts and confirmation.

Now I am not saying the Bitcoin bull market is over, but there is a possibility of a head and shoulder pattern printing here which would then mean the top is in. I will of course keep you all up to date on that through Market Moment, but if you want live updates, join us over on Equity Guru’s Discord Trading room.

Ethereum just a pullback and retest?

Ethereum so far is just showing normal price action. When price breaks out, we expect a pullback to retest the breakout zone. In Ether’s case, this is the $2000 zone. We hit it, and lo and behold, that is where buyers have stepped in.

$2000 is our key support. Expect buyers to step in and defend. A break and close below would point to further downside on Ethereum.

The very same can be said about XRP. I wrote about important technical zones and the chart set up on XRP a few weeks back. The analysis still holds.

All I see is a pullback to retest the breakout zone. Either buy at support, or it fails and we breakdown.

As you can see, these drops in crypto point more to a pullback. I mean profits need to be taken. No danger of any bear market just yet, but Bitcoin is the chart to observe for that bear trigger. If Bitcoin prints that head and shoulders reversal pattern, the cryptocurrency market top could be in.

The same strategy that has been used for stocks applies to cryptocurrency: Buy the Freakin Dip. This is gaining steam due to all the new retail crowd entering financial markets, and the memes which support this strategy. This is great for now, given central bank policy, but just be warned, one day this will not apply.

Filament Health (FH.NE) is experimenting with mushrooms and compounds far beyond just psilocybin