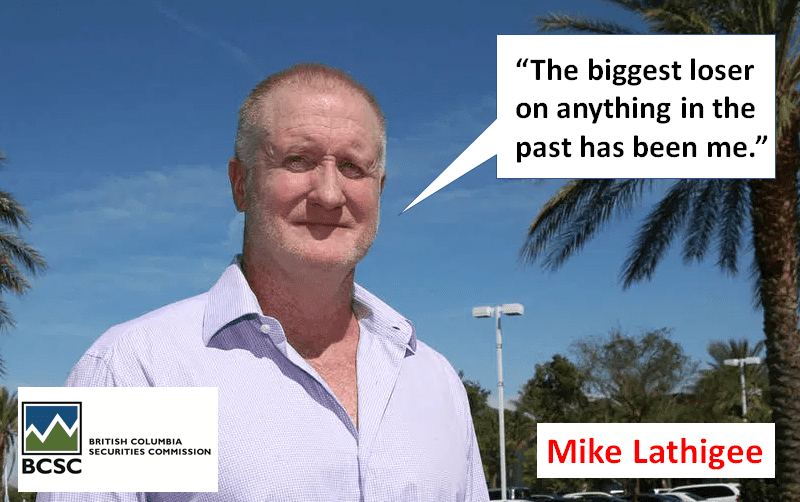 His Freedom Investment Club (FIC) was attracting new members. Some of them were receiving hefty monthly dividend cheques. Across North America, starry-eyed investors jostled to meet Lathigee at get-rich seminars.

“The FIC looks very much like a mutual fund,” reported infamous Vancouver Sun investigative reporter David Baines in 2007, “But it is run by unlicensed portfolio managers who make investments not often disclosed to investors.”

Baines is meticulous researcher and a gifted writer.

He attacks with a surgeon’s blade.

Typically, his victims bleed-out before they know they’ve been cut.

“I watched David Baines up close at The Sun as he wielded his righteous indignation at Howe Street every week,” recalled Equity Guru’s Chris Parry in a 2018 column, “brutalizing folks who had it coming and who were taking seniors – which make up most of The Sun’s readership – for a financial ride down the toilet”.

“When FIC was created in 2002, its chairman and CEO, Michael Lathigee, billed the club as an alternative to traditional mutual funds,” continued Baines, “Unlike mutual funds, FIC would enable members to participate in investment decisions, he said, thereby bringing financial empowerment to the masses.

Under the stewardship of Lathigee and president Earle Pasquill, FIC and related companies now boast 4,500 members in Canada and the U.S. and $80 million in assets under management.

However, as membership has increased, shareholder participation in investment decisions has dwindled. Shareholders now have virtually no say in how their funds are invested. Those decisions are made by a ‘deal-flow committee’ headed by Lathigee.

In December 2005, the BCSC issued a cease-trade order against FIC and two related companies, WBIC Canada Ltd. and China Dragon Fund Ltd., because the offering memorandum was not in the required form. The BCSC ordered FIC to offer investors their money back.

Flash forward 14 years, and The Song Remains The Same.

“A former Canadian national who is listed as an officer of nearly two dozen Nevada companies defrauded investors in British Columbia and must repay more than $16 million, according to Canadian and Clark County court records,” reports the Las Vegas Review-Journal on August 11, 2019.

“The British Columbia Securities Commission found that Michael Patrick Lathigee collected $21.7 million in Canadian dollars — about $16.4 million in U.S. dollars at current exchange rates — for an investment in distressed properties and then used the money for other investments, the commission’s records show.

The commission also fined him the equivalent of $11.3 million.

Lathigee left Canada for Las Vegas before the commission collected the money so BCSC sued Lathigee in Clark County District Court and won a judgment in May requiring him to reimburse the investors. Lathigee is appealing.

“We are looking for assets wherever they are to collect whatever is owed,” said BCSC Director of Enforcement Doug Muir in a telephone interview.

Lathigee said his B.C. businesses failed around the collapse of the banking industry in 2008, and the BCSC made an example of him because of negative news reports and his criticism of the agency and the financial industry in Canada.

Either his mouth, or high-profile media coverage got him in trouble.

“The Sun reported that the B.C. Securities Commission, in particular, has collected only 2% of the $510 million it assessed in the last decade,” wrote Baines a year earlier.

Regarding the FIC’s assets, Baines wrote “The money was not spirited away into some offshore account. It was invested and lost. It no longer exists.” 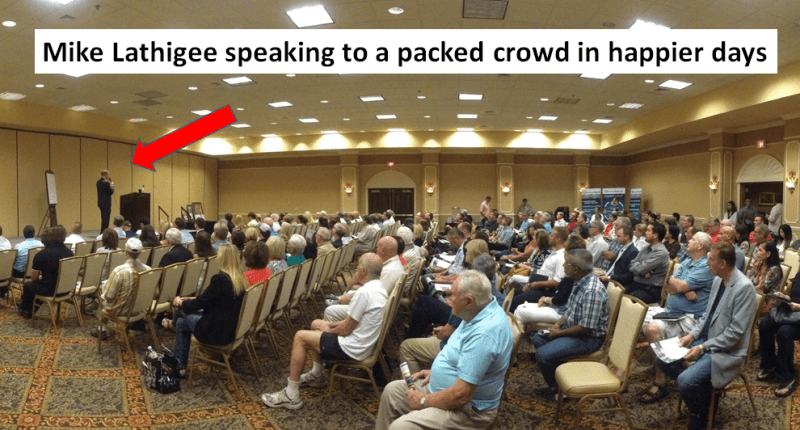 Mike Lathigee agrees with Baines that “the money no longer exists” – but he resents Bains deeply for calling him a fraudster.

“You admitted to me that you have not read one economic monthly journal I have written in the last 5 years,” Lathigee told Baines in an email, “It is obviously just a mean spirited relentless attack as you admitted on several calls you don’t like me.”

“I have not the time or funds to pursue you legally,” added Lathigee, “and simply ask that you adhere to the standards set by your industry”.

“Raise your hand if you’ve been to my house,” Lathigee directed the dozen audience members, “Okay. And why do I do that? Because I want all the members of the club to feel very comfortable.”

“I’m proud of my track record,” continued Lathigee, “proud of what I’ve done in the past. I certainly have not been right every time. But again, the biggest loser on all that was, in fact, myself. I came down here [to Las Vegas] with zero and rebuilt.”

Losing $21.7 million is never a good look, but Lathigee gets some things right.

“The gold and silver market has moved up very quickly and this will be a trend that continues for the foreseeable future,” Lathigee told his club members in August 2020, “However, at this stage consider taking out your original capital and let “the house money ride”. 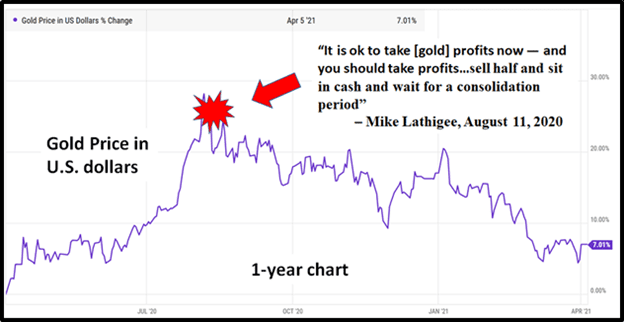 “The B.C. Securities Commission has won a major victory in pursuit of a fraudster in the U.S. who faces huge penalties here,” wrote Vancouver Sun reporter Gordon Hoekstra in December, 2020.

“Lathigee argued that he did not personally benefit from the collapse of the investments that he blames on the 2008 financial crisis”.

“Are you aware there is a lawsuit right now ongoing for 56 gold coins taken from my safe during the day of the seizure that did not show up on the list of items seized?” asked Lathigee rhetorically.

“None of this is interesting to you as it does not demonize me and help your story of calling me a fraudster over and over and rehashing the same story”.

“One of the BCSC expert witnesses, a lawyer named Mr Johnson, admitted I had no personal gain and wrote such in a court filing,” concluded Lathigee in the aggrieved e.mail.

If Lathigee thinks being “a loser” is a defense against a fraud charge, he is mistaken.

That is not how the law works.

The BCSC determined that Lathigee had lied to investors.

Lathigee disagrees and his still fighting to clear his name.

But that is the crime he was found guilty of by the BCSC.

If I rob a bank, use a boat for a getaway – then accidentally drop the money overboard – that doesn’t absolve me of the bank robbery.

It’s not even a mitigating factor.