Recent volatility has many questioning the validity of holding gold in one’s portfolio in this era of global economic uncertainty and unbridled currency debasement.

… the precious metal, failing to sustain the momentum required to decare GAME ON in this high-stakes arena, was beaten back like a rented mule.

This next chart shows the metal’s current status having failed in its attempt to breakout (the declining blue resistance line), testing significant support at $1,673 in recent sessions.

As I type this piece, gold is attempting yet another breakout above the declining blue resistance line, testing the $1,720 level as trade shifts over to North America.

Many believe that Bitcoin is replacing gold’s role as an alternative to central bank-controlled fiat paper. Clearly, Bitcoin’s price performance in recent weeks/months has been the superior trade having tagged $61k earlier this month while the precious metal did the square root of dick.

“Old-guard gold appears ready for nap time vs. young bitcoin. The gold bull market has clearly stalled, and we believe it’s transitioning toward a long-slog, range-bound market …Unless the higher price discovery process in Bitcoin reverses, the crypto represents a top gold headwind.”

The Gold vs Bitcoin debate wages on.

The precious metal may be on the ropes, technically speaking, but it still has its (smart money) proponents.

In the above vid, Frank Guistra is attempting to draw out Michael Saylor, perhaps Bitcoin’s most outspoken and mainstream advocate, in an attempt to publicly challenge his views. In characterizing Saylor, Giustra colorfully states:

“I think he is really influencing the investment community, he is getting traction, he’s a really smart guy, he’s doing a great job of selling the story—his thesis—by painting an Italian sunset using language which is a mixture of poetry and science that is bordering on the evangelical.”

You gotta love that portrait.

While he sees some similarities between the two asset classes, Giustra wisely counsels:

“All asset classes serve a different purpose in a portfolio and I think that, if you don’t understand that distinction, you’re going to make your investment for the wrong reason.” 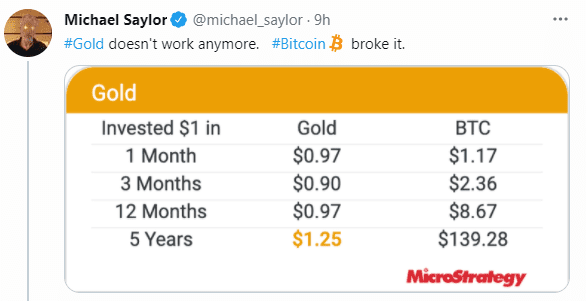 This next Giustra quote should help set the stage for a constructive debate, one free of an endless barrage of “rhetorical hand grenades”:

“I am not a Bitcoin hater. I just think that [Saylor’s] thesis on gold and Bitcoin needs to be explored and I think I would love the opportunity to explore some of the statements that he’s making on some of these interviews [that he’s done]”.

Be sure to turn up the volume if Saylor accepts Giustra’s challenge.

It’s during periods like this when stock selection—shortlisting only the best of the best—is critical.

Honing one’s due diligence skills—digging deeper, scouring the investment landscape… getting on the horn with management and trotting out the tough questions—will sometimes uncloak an unrecognized, unappreciated, underpriced gem.

When sentiment is weak—the junior exploration arena may be THE most hated sector right now—these high-quality plays often get tossed, unceremoniously, by weak-kneed retail investors.

It’s effortless buying stocks when they’re in a strong uptrend and the online message boards abound with bullish “I-can’t-freakin-believe-how-great-this-company-is” commentary.

It’s difficult, painful even, stepping up to plate initiating buy orders when sentiment is sour and the stock is being tossed with little to no regard for its intrinsic value.

Reflecting back over the years, my greatest victories in this arena stemmed from overriding my reluctance and apprehension—my fear—holding my nose, and willing myself to hit the ‘submit buy order’ key on my trading platform.

A potential buy candidate for your consideration

When I first chatted with Jack Stoch, Globex Mining’s (GMX.T) president and CEO, I must confess to being somewhat overwhelmed by the sheer number of properties in his project pipeline.

Talk is cheap in this Wild West of a sector. A company can boast any number of attributes—fundamentals that may ultimately forge shareholder value—but in my way of thinking, the proof is in the share structure.

Since CEO Stoch took over the company in 1983, he has kept the dilutive financings to an absolute minimum and has never rolled back the stock. If you’re unfamiliar with Globex, you might ask, “So what… how many billions are outstanding?” Get this: there are currently 54,999,817 outstanding and 57,829,817 fully diluted (management owns 11.03%).

If you’ve been following the junior exploration sector for as long as I have, you’ll be scratching your head wondering, “How is that possible in this capital-intensive arena… some companies blow out their structure within the first few months of trade?”

The answer is in the Company’s business model, management’s core values, and their ability to execute.

Globex is a project bank and incubator.

CEO Stoch is well connected and is always on the hunt for high-quality assets in well-established mining-friendly jurisdictions.

Sure, everyone claims to be well connected in this sector, but Stoch—a registered Professional Geologist in the province of Quebec—was once reported to be THE largest private mineral rights holder in the province.

Stoch’s approach involves acquiring properties dirt cheap, advancing them using good science and intellectual input, and monetizing them via options, outright sales, and royalties. If you look at his deals, they very often include an upfront cash component and/or marketable securities. This is how Stoch keeps his treasury topped up and the share count low.

With a total of 192 properties in the Globex project pipeline, 96 of which are prospective for precious metals, 60 for base and polymetallic metals, 36 for specialty metal metals (lithium, manganese, scandium, etc), there’s a lot of potential to incubate here. 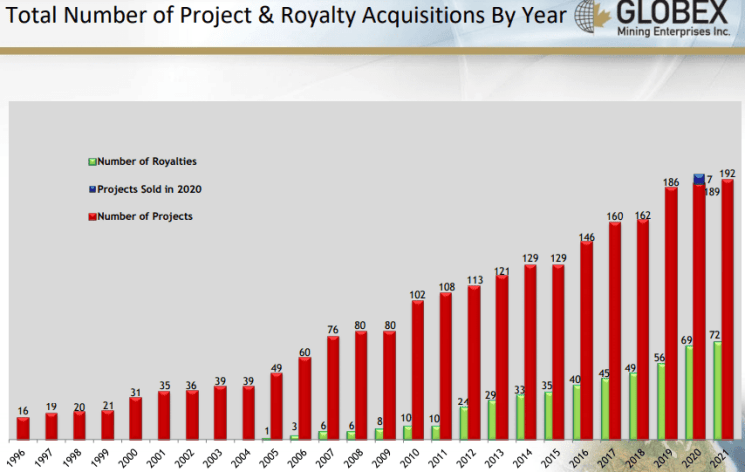 Many of these projects are located along the Abitibi Greenstone Belt, a prolific mining jurisdiction credited with over 200 million ounces of historical gold production.

Breaking things down further, 72 of these properties carry underlying royalties controlled by Globex, four have been optioned out to other companies, and 54 bear mineral resources (historical or 43-101 compliant).

This press release, announcing the sale of its Mid-Tennessee Zinc Mines royalty to Electric Royalties (ELEC.V), represents a watershed event for Globex and its shareholders. 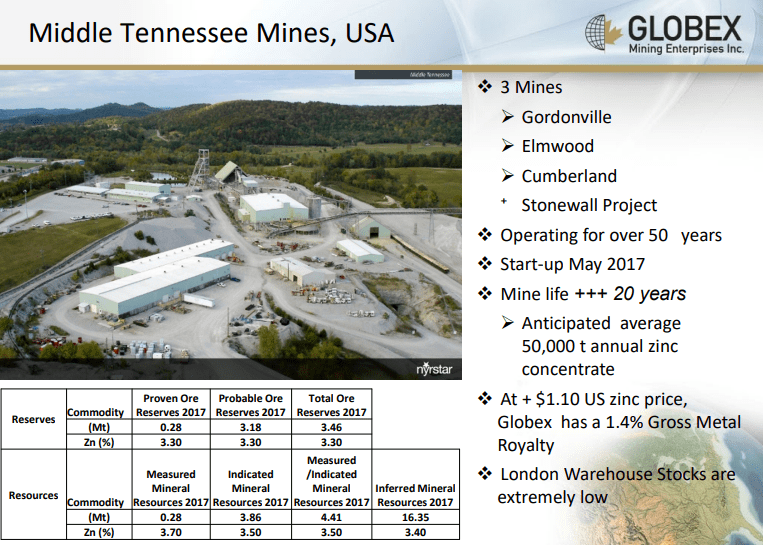 The following considerations are attached to the sale of this significant (producing) asset:

This is a weighty transaction, one that opens up all kinds of possibilities for future acquisitions and/or development scenarios.

This press release goes on to state that this is the second transaction through which Globex has sold battery element royalties to Electric Royalties.

With the projected completion of this transaction, Globex will hold approximately $30,000,000 in cash and shares.

Here, the Company announced the receipt of the initial $250,000 cash payment from Electric Royalties spelled out above.

Electric Royalties now has 90 days to run its due diligence on Mid-Tennessee and raise sufficient funds to finalize the deal.

Further up the page I stated that the framework of this project portfolio is in a constant state of flux. This March 31st press release went on to detail the following deals CEO Stoch struck in recent weeks…

Globex announced having received the second $50,000 option payment from Starr Peak Mining (STE.V) under the Normetmar/Normetal/Lac Turgeon/Rousseau option agreement where Globex retains a 2.5% GMR (Gross Metal Royalty) on these properties.

The Lac Suzanne copper/nickel project was transferred by Enertourbe to CCW. The option terms payable to Globex are $50,000 in cash payments within a 12-month period and $100,000 in exploration expenditures. Globex retains a 2% Gross Metal Royalty.

The Orbit Alumina claim was sold to Alumina Quebec Mines (AMQ) for 2,000,000 common share purchase warrants exercisable without payment vesting 100% on the date AMQ affects the transaction. Globex retains a 3% GMR on the property.

Globex sold the Pegma copper/nickel/cobalt and zinc property to High Tide Corp, a private subsidiary of Avidian Gold (AVG.V), for $10,000 in cash and the issuance of 650,000 High Tide shares (we should see the company’s initial public offering by September 30, 2021). Globex retains a 2% GMR, one percent of which may be clawed back from Globex for $1.5 million.

Lastly, Globex sold its Checkerboard gold property to Vior Inc (VIO.V) for a single payment of 150,000 common shares and a retained 2% GMR, 1% of which may be purchased for $1 million.

I’m beginning to lose count of the number of deals Stoch has inked since the beginning of 2021.

The magnitude of the Mid-Tennessee transaction wasn’t lost on the market. The Company’s shares tagged an eight-year-plus high before drifting back to its current $0.75 level.

Once the Mid-Tennessee deal is finalized with Electric Royalties, Globex will add considerable bulk to its books.

I’m curious as to what CEO Stoch is planning next.

Globex shares also trade south of the border on the OTCQX International under symbol GLBXF and on the Frankfurt exchange, symbol G1MN.

Postscript: Gold closed out the abbreviated trading week with a nice poke above the aforementioned declining blue resistance line…

Game on? (We stand to watch)