It was a highly anticipated Federal Reserve Meeting. The Stock Markets were mixed leading up to Fed Char Powell. We did not expect any major policy change, but we were expecting comments about the yield curve.

Jerome Powell and the Federal Reserve were dovish and he did say a lot of things the stock markets liked. However, there was one missing element which continues to concern equities. 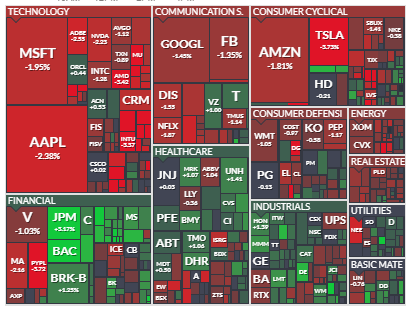 But he has another chance today to address the elephant in the room. Fed Chair Jerome Powell is scheduled to speak at 11:55 am EST at the Bank for International Settlements Committee on Payments and Market Infrastructure Conference.

He will have another chance to address the rising 10 year yield.

The number 1 take away from yesterday’s meeting is that the Fed has promised to not raise interest rates. The Fed sees a stronger economy (this year’s GDP expectation was raised to 6.5%, with the unemployment rate falling to 4.5%). The Fed also sees higher inflation but here is the kicker. Even though the economy and inflation will be improving, there will be no interest rate hikes until inflation steadily above 2%. This is the Fed’s standard which is required for a change in policy.

Probably something unexpected, and could lead to some fears down the road, was the fact that committee members have tilted hawkish in regards to expectations of rate hikes. 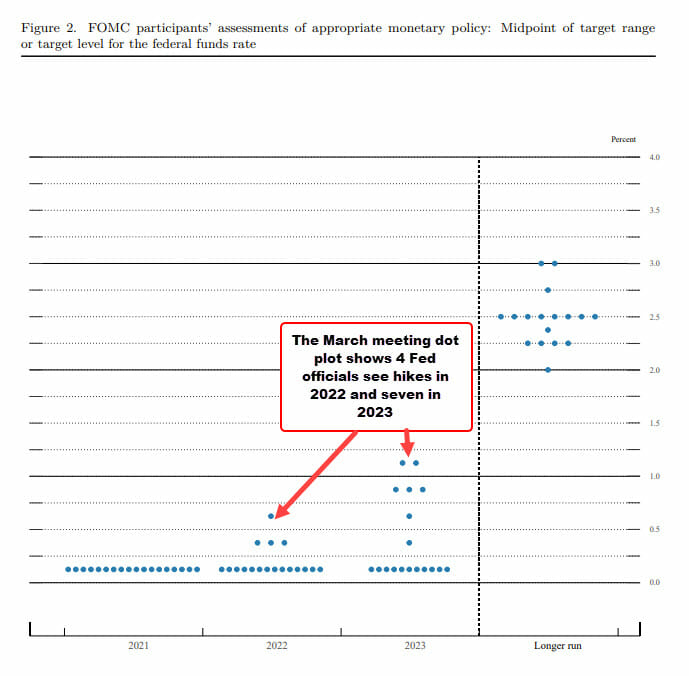 But the big elephant in the room is this: 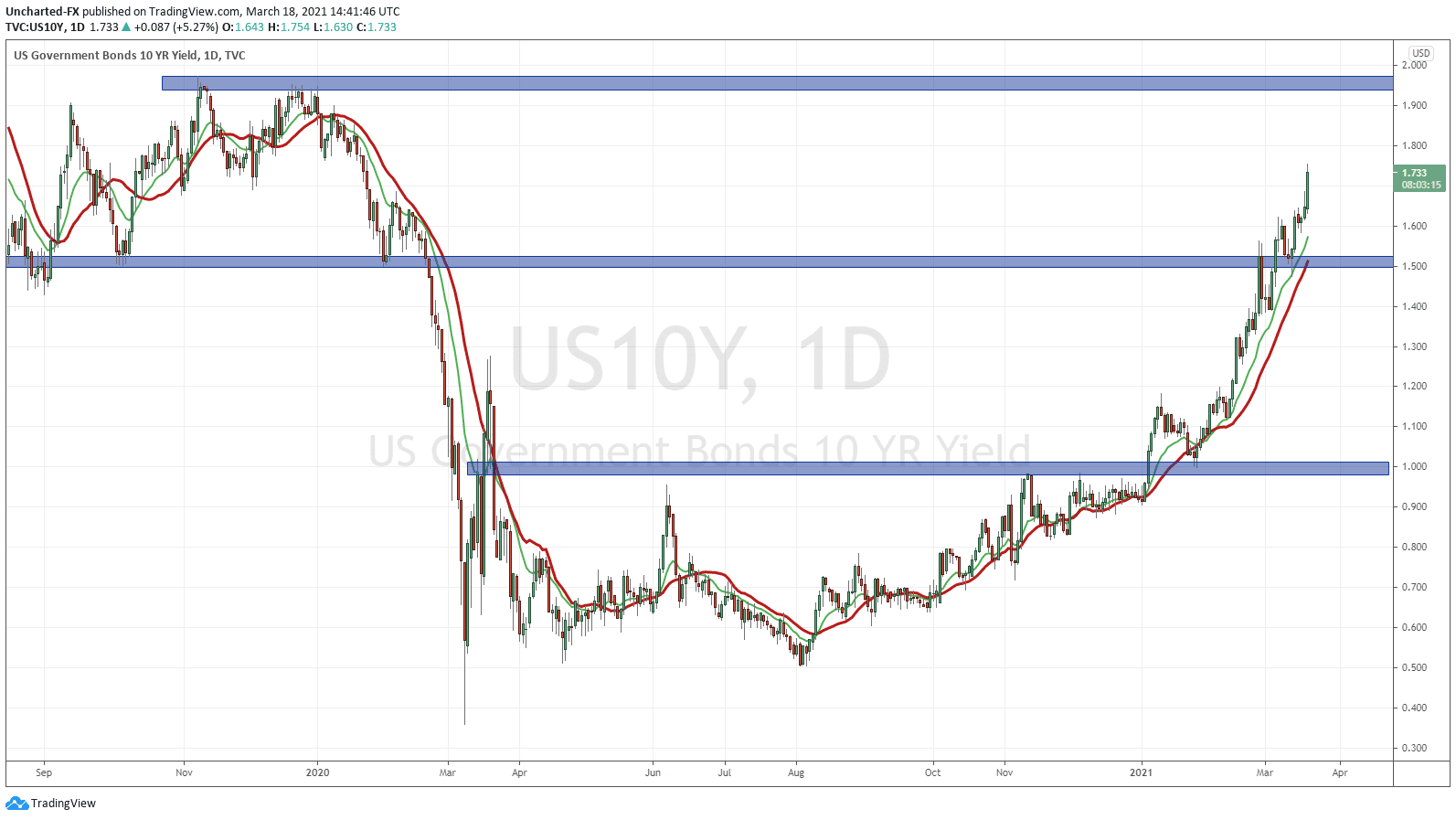 The rising 10 year yield. Yields hit highs of 1.754% today before settling at 1.733% at time of writing. This is putting pressure on the US stock markets.

As explained in yesterday’s Market Moment post, expectations for some sort of bond market manipulation may have been high due to the actions of the European Central Bank last week. The ECB is increasing their asset purchasing program to buy bonds in order to tackle rising yields. We even saw an article stating that rising yields are leading to a major drop in mortgage refinance.

This is the worrying aspect: with all the debt in the system now to combat the pandemic, can we really increase interest rates? Have we become like Europe and Japan who cannot even raise rates by a quarter basis point?

Expect some sort of yield curve control comments soon. Maybe the 10 year yield will have to climb above 1.80% or even hit 2% (my technical target), but once the Fed reassures traders/investors that they will manipulate yields to backstop the market…stock markets will continue to climb higher.

In terms of the equity markets, the Dow still remains the strongest, while the Nasdaq remains the weakest. We cannot ignore the fact that maybe this is the rotation into value stocks. With value stocks paying dividends, have they become the new bonds? 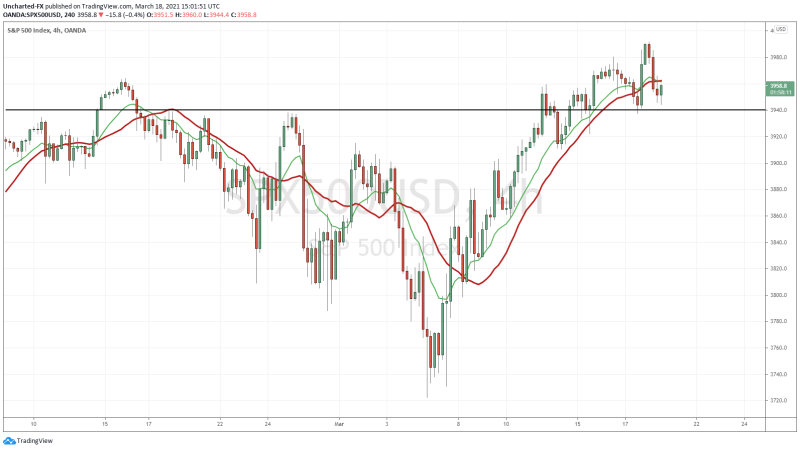 The S&P 500 is close to retesting yesterday’s lows. Note that immense green candle during the Fed meeting. Most of those gains have been given back. I will be watching the 3940 zone. If the S&P 500 breaks and closes below 3940, we will tumble further. Back down to 3900. But be careful, where we currently are sitting is a major support zone on the daily chart. 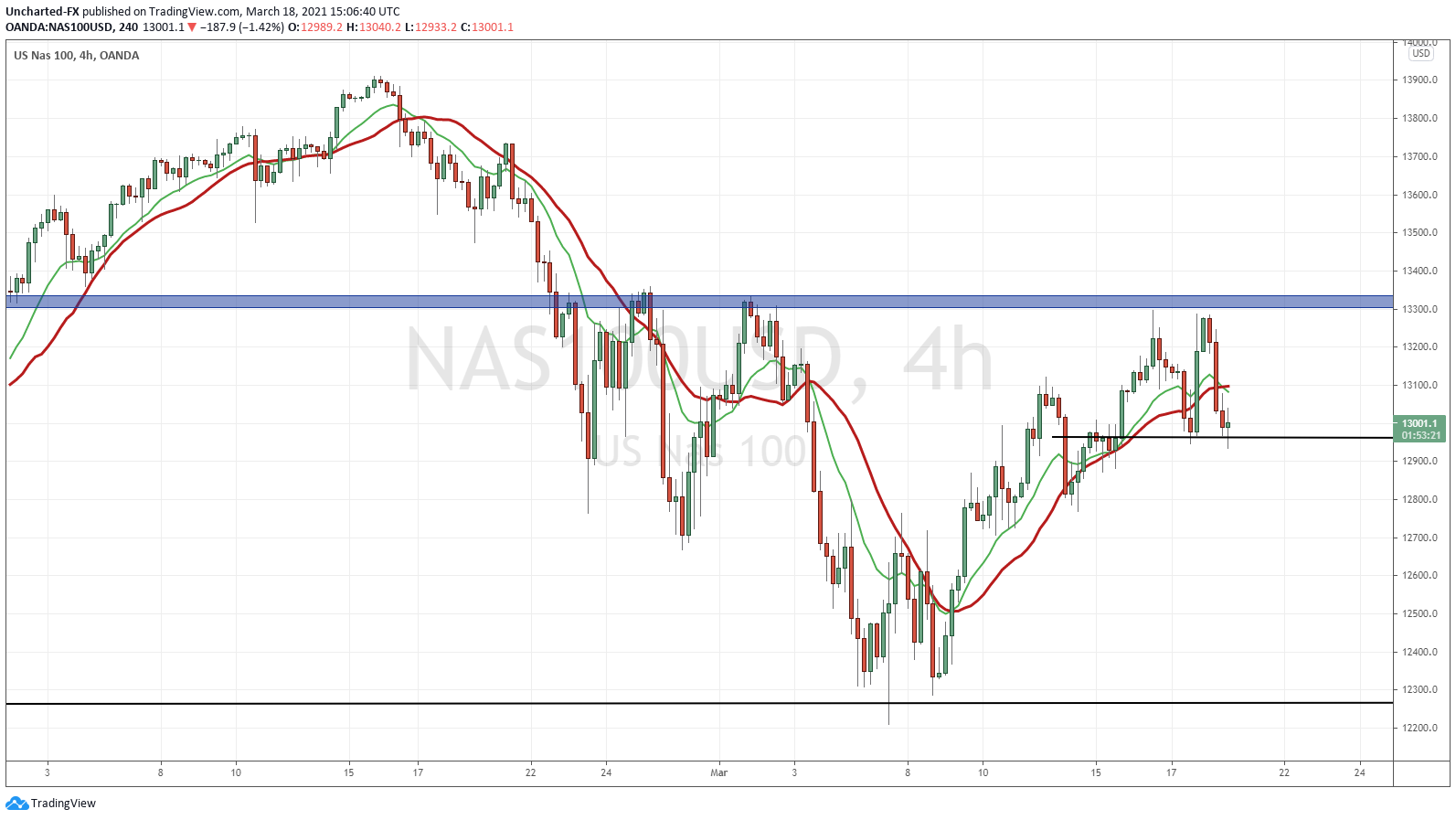 The Nasdaq remains the weakest. In fact, we did break below yesterday’s lows, but have now bounced on the intraday. This zone is BIG. If we get a break and close below 12,977 I will take a short trade on the Nasdaq.

I only shift my stance on the Nasdaq once it break back above 13,300. As long as it remains below, we have a real possibility of making another leg lower. 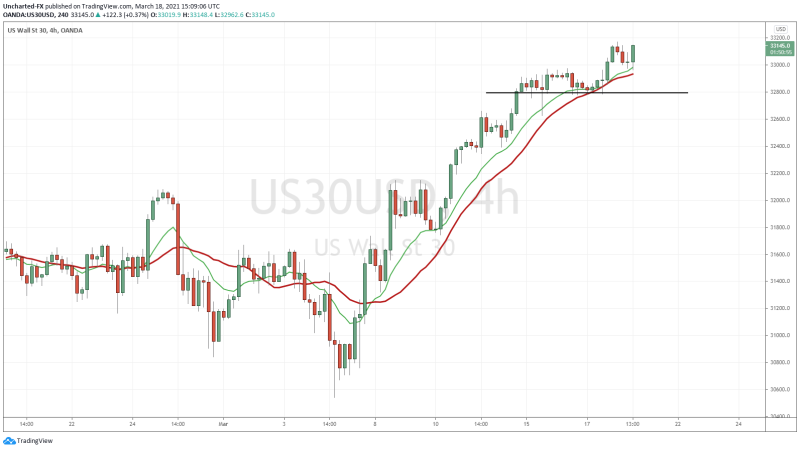 Finally the Dow, and what more can I say. Originally I was looking to short on a break below 32,800. It didn’t happen. Instead we shot up higher to make new record highs, and it seems as if we will make more record highs by the end of the trading day.

The Dow has held up thanks largely to stocks such as Boeing, JP Morgan, Disney, and American Express. But what intrigues me is if we are seeing money rotate out of technology and into value stocks. Yes, value stocks will drop as everything sells off, but the dividends present a case for value stocks to be the news bonds.