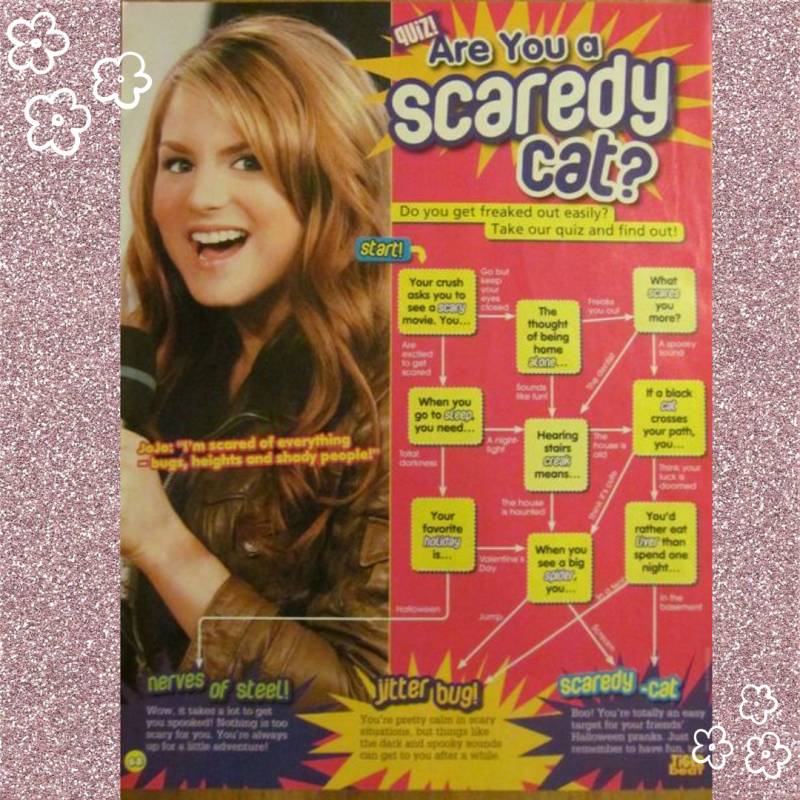 Billionaire Warren Buffett made his money in the market largely by betting on the idea of the American Dream working out.

And while the reality of that dream still being alive is up for debate, Buffett made a good bet. Just take a glance at the S&P 500.

He is a brilliant speculator of companies and long-term fundamental investment strategies, leading the way in turning Berkshire Hathaway (BRK.N) into a $594B USD market cap company. Through household names like Coca-Cola (COKE.Q), Bank of America (BAC.N), and Apple (AAPL.Q) Buffett was buying into American consumerism from every angle just as the game was getting started. By 1959 Buffett was a millionaire at the age of 30.

Buffett once famously said, ‘for 240 years it’s been a terrible mistake to bet against America, and now is no time to start.’

Shitposters will say this it’s just luck and inflation of the US dollar at work. Yes, the US dollar is propped up by insane levels of printer go brrrrrr from the Fed, but this also ensured anyone who invested in America back when Buffett was a rookie made out well.

That is one method for investing in America, or you could grab an S&P Index Fund, with a multi-decade consistent uptrend, it’s passive as hell – it’s one of the safest bets in the market.

But Buffett’s brand of low-risk, long-term value investing is typically only one piece of the puzzle for most modern-day investors who day trade crypto, forex, options, futures, and of course, build sweet $BECKY portfolios.

The $BECKY strategy focuses solely on investing in American lifestyle brands selling overvalued and overpriced products and services to rich and upper-middle-class white women. Very similar in nature to the racist Karen joke, but, Becky is of course a lot nicer.

For reasons that go far beyond the scope of this article – women have significantly more buying power when it comes to decision making in the consumer marketplace, despite making less money than men. This is one of the opportunities our $BECKY listed companies have tapped into.

According to the Havard Business Review, women make the decision in the purchases of 94% of home furnishings, 92% of vacations, 60% of automobiles, and 51% of consumer electronics. Inc.com estimates women make up to 70-80% of overall consumer purchases.

The idea of companies continuously gathering data on their clients is kind of weird, but it’s a new reality. Companies do this to increase brand loyalty by understanding their persona (typical buyer) as best they can. The more info they have the better they can craft their ad copy, and thus, sell more products.

It makes sense to invest in companies that have an almost cult-like following, like Nike, lululemon, Starbucks etc. These companies have swaths of loyal customers who will shop no matter what the global economic outlook is, and they have the eye of every big fund and bank around.

Not to bore people on how successful all of these companies are, but just quickly in 2020, despite the pandemic, Lululemon’s revenue rose about 2% to $902.9M USD from $883.4M USD a year earlier, topping expectations for $842.5 million. Online sales were up 157%.

The American image is highly exportable, lululemon has already made its way to Singapore, South Korea, China, France, Sweden, the list goes on. Starbuck’s (SBUX.N) in-store sales only dropped 9% in the US in Q4 of 2020. Net revenues of $6.2 billion declined 8% from the prior year. Earnings per share did drop from $0.67 to $0.33, but the stock recovered nicely. Despite the economic conditions, fans of $BECKY companies continued to spend.

How to build one

Here is a basic $BECKY ETF from r/wallstreetbets.

Here is a mid $BECKY ETF from beckyetf.com. 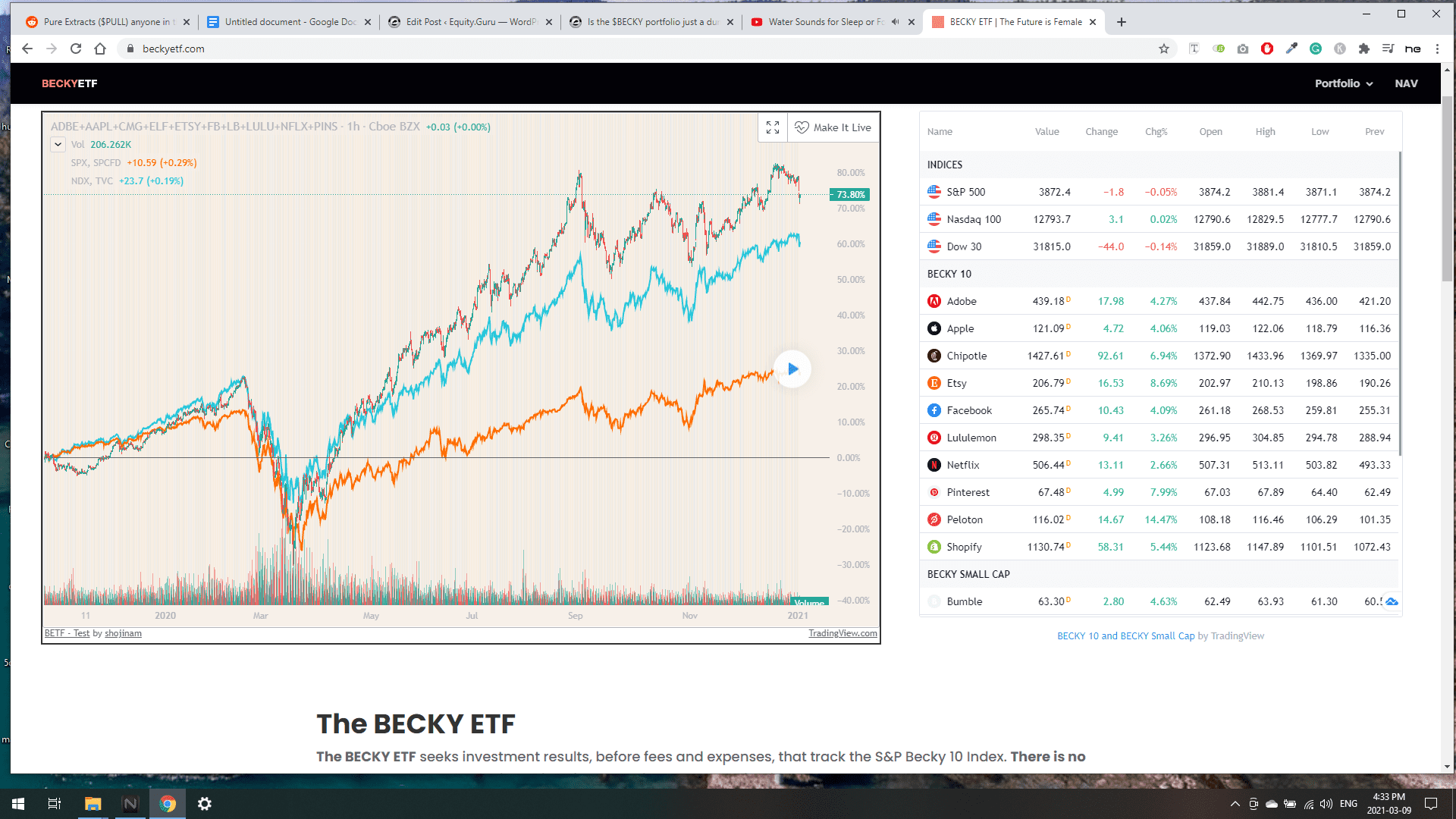 And lastly here is a more advanced version from Redditor /u/ JimmieRussels who went all-in on consumer goods index funds, including a $CHAD (the male version of $BECKY). 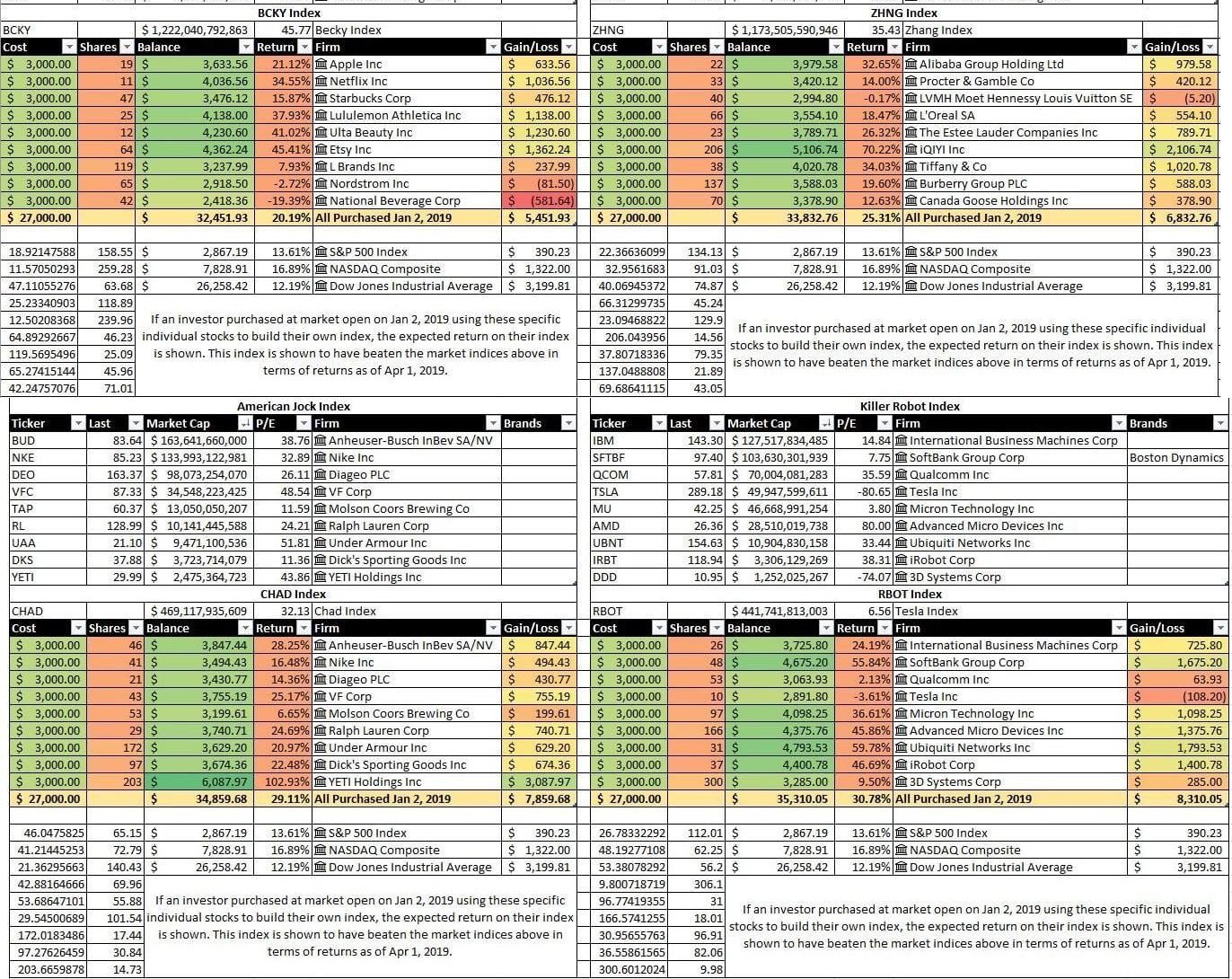 One thing to notice from almost all of these companies is again, American-based brands that have high consumer value and international appeal. The American dream is one of the most marketable things to an international population.

After all of those numbers, here’s some more top-quality DD. I noticed Lululemon, Nike and Adidas were absolute home-runs in Asia, they were everywhere. Tourists, locals, everyone was buying knock-off American brands, it was crazy. It was the same scene in Vietnam.

One day I actually got lost in Vietnam about 4 hours North of Ho Chi Minh (Saigon). There was a huge head-on collision on the highway and we had to re-route through miles of dusty old farm roads, eventually, after driving around in circles we came across a Vietnamese family. We were out in the absolute middle of nowhere and one of the kids walks up to the car behind his parents wearing a jean jacket with the US flag on it. I did a double, maybe triple take. I saw McDonald’s and Starbucks all over Asia, but this one was a big surprise.

Here’s one of those markets in Thailand, my man was having an off night. 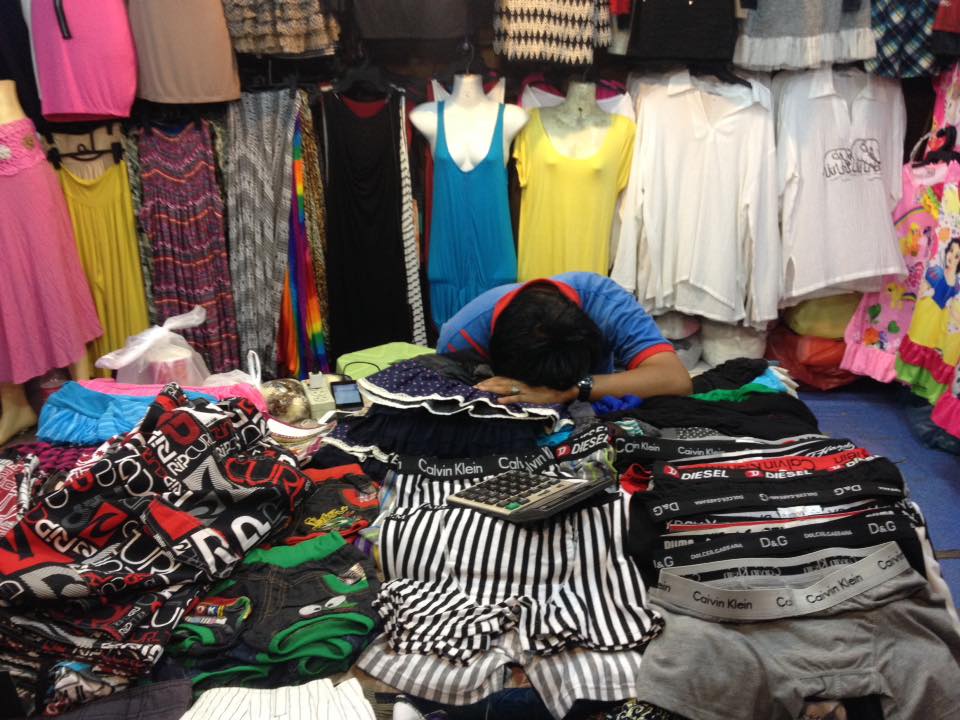 In Colombia, I was in a small town in Quindio, Colombia’s infamous coffee region. Among the dense rainforests and bright-coloured Colombian architecture was this big beaten-up HOLLYWOOD sign atop this store selling knock-off American clothes.

In the old Habana and Vedado districts of Havana, I saw most millennials dressing more American than American’s do.

So is $BECKY just a dumb internet joke by dudes sexualizing their stock portfolio, or is it a proven investment strategy?

At first, it probably was a dumb joke, but taking a closer look there is some merit to this strategy of picking a specific target demo to go after, just as these companies do. This strategy could be used for building your own persona-based consumer goods ETF, as we have seen these portfolios don’t necessarily need to be $BECKY’s, maybe a $CHAD or $KAREN even. $KAREN is probably more mining stocks tbh.

With the diversification across companies, you are lowering your risk. Yes, these are mostly American-based companies who operate on the $USD, but these companies have worldwide appeal and aren’t tied to a single currency if it were to tank, and as we saw with Lululemon online sales are through the roof.

Another advantage of following the $BECKY road is there is a large community of people doing it, I mean MikeyMillions of Kamikaze Cash just named his newborn daughter Becky because of all this. Whether you are buying shares for the long, or day options – it sometimes helps to have a mob of people doing the same thing, that way there are more resources to learn how and when to trade, and your trades are more likely to go through as $BECKY companies are all blue-chips with high volume. They are stocks most investors wouldn’t hate owning if they were say trading options and got assigned. 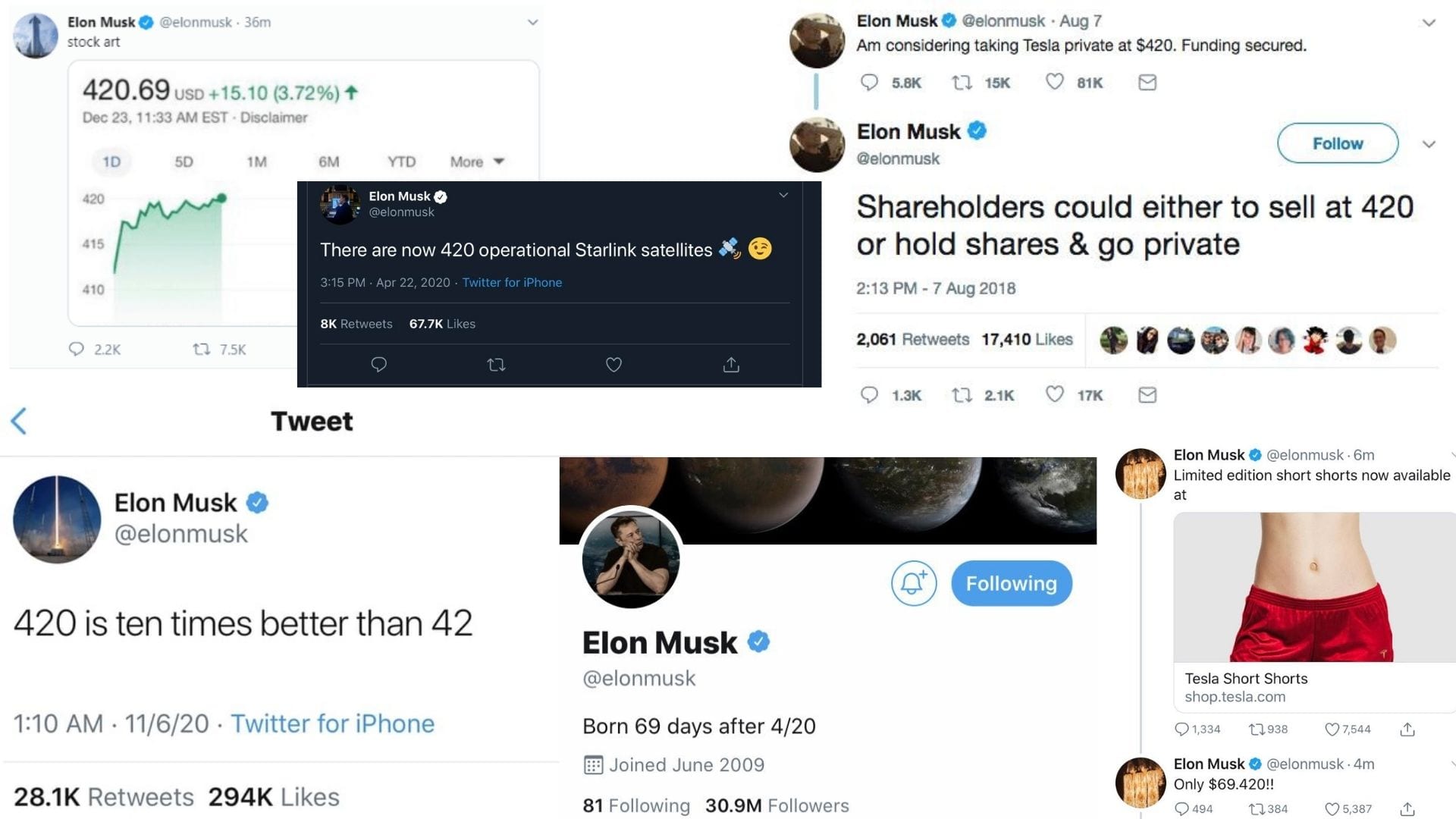 Another funny development is the tide turning around new billionaires, they seem to really be interested in coming off cool to the younger generation, namely retail investors.

Just look at how closely Elon Musk, Mark Cuban, Chamath Palihapitiya, etc. are positioning themselves to the younger Reddit demographic, the Gamestop fiasco was the perfect opportunity for them to shit on the hedge funds and call Reddit the coolest place on the internet.

Elon Tweeting 420 and 69 jokes weekly and buying shit tons of Bitcoin, Cuban doing AMA’s on WallStreetBets and allowing DogeCoin to be used to purchase tickets and merchandise from his Dallas Mavericks NBA team, and Palihapitiya, roasting boomers on CNBC 24/7 over their misunderstanding around investor activism over profit through the Gamestop (GME.N) short squeeze.

$BECKY has become such a thing that I think someday one of these new billionaires will create an actual $BECKY ETF and they will make a killing on meme value alone. My money is on Elon, just seems like the type, it’ll be like a $4.20 management fee with 69 holdings or something stupid. 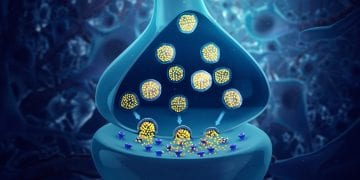