Hut 8 Mining (HUT.T) added another 400 miners, and over 109 megawatts to its overall Bitcoin mining capabilities today, according to a press release.

Hut 8 used their equipment financing loan from Foundry Digital, a subsidiary of Digital Currency Group, to bolster their petahash rate to 475 PH/s over the course of Q1 and Q2. They’ve added 35 PH of that total today, giving them more power to mine Bitcoin.

“Guaranteeing our access to new, cutting-edge mining equipment while market demand greatly outweighs supply has solidified our position as one of the only miners operating at full capacity, taking full advantage of today’s economics. On behalf of the entire Hut 8 leadership team, we are thrilled to be seeing the return on our investment, on schedule, and are excited about what this installation means for Hut 8’s continued success as a growing global leader,” said Jaime Leverton, CEO, Hut 8.

Hut 8 Mining is a Canadian-based Bitcoin miner with operations in multiple provinces, but with the majority of their operations in Medicine Hat and Drumheller, Alberta. Their present maximum power sits at 109 megawatts across the previously named two Alberta locales, and they enjoy a present maximum hashrate of 1073 PH/s making it one of the largest bitcoin miners in the world with one of the highest capacities in North America.

This is basically what we can expect going forward as Bitcoin continues to expand. These operations are going to scale to meet with the growing mining difficulty, expanding until each power station gobbles up the same amount of power as a small country. We’re a few years away from that, though, but we may be there by the time of the next halving—scheduled in 2024.

For right now, though, having a full fleet of advanced miners during a time of equipment supply constraints has given companies like Hut 8 a distinct advantage in the race to close the block. Given that Bitcoin miners like Hut 8 are tied to the Bitcoin’s enduring fate, it’s no wonder they’re doing so well. 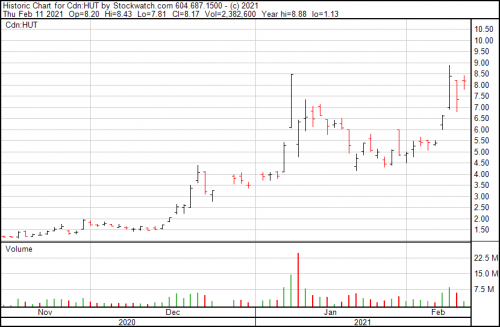 Hut 8 is up $0.40 today, and is presently trading at $7.74, which has been more or less a continuing trend as Hut 8 rises with the popularity of Bitcoin. In December, they were trading at $1.50. You do the math.