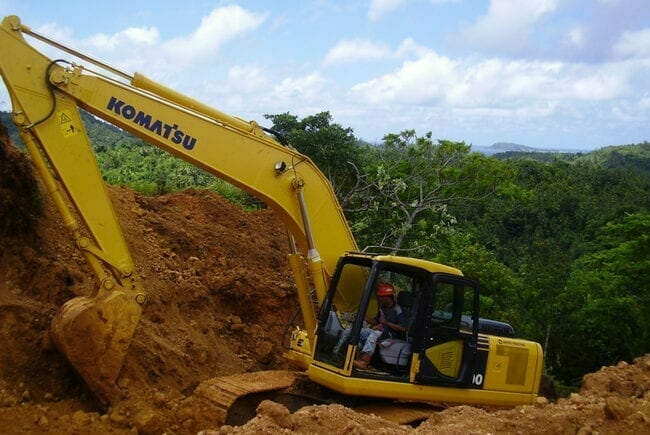 Those of us holding shares in Baru Gold (BARU.V) have been waiting patiently for the Indonesian government to greenlight the Company’s flagship asset. The pandemic intervened causing a three-month delay.

This flagship asset—the Sangihe Gold Project—is being fast-tracked to production, and after yesterday’s news, it should begin cash-flowing as early as Q2 of 2021.

Baru now has the all-clear from the Indonesian Ministry of Energy and Mineral Resources to commence production at Sangihe.

The Sangihe Gold Project consists of 42,000 hectares covering the southern half of Sangihe Island, located between the northern tip of Sulawesi Island (Indonesia) and the southern tip of Mindanao (Philippines).

Baru has a 70% working interest in the project—three Indonesian companies hold the remaining 30%. Baru, with its seasoned team of mine builders and rock kickers, is the project operator.

Baru management has its sights set on a modest heap leach production scenario at Sangihe.

Stage One of the Sangihe mine plan will see the production of roughly 1,000 ounces of gold per month when the facility is fully operational. This number could be a conservative target (author thinking out loud).

Sangihe holds 266,000 ounces of gold in its immediate subsurface layers, including 58.8k ounces of near-surface oxides.

(Oxide material is extremely cheap to process—the Company could see an immediate benefit right from the get-go).

Estimated all-in costs should work out to roughly $800 per ounce.

With $1,850 gold, the economics here are compelling, even with this modest (initial) production rate.

If things go by-the-numbers, we could have our first gold-pour by late May.

Keep in mind that this is only phase-1—Baru plans to scale the project higher.

Mine expansion—scaling Sangihe up to 4,000 ounces per month—will be achieved via the installation of a Merrill-Crowe Gold Recovery Processing Plant.

When Merrill-Crow is installed—a nine month process—Sangihe’s silver (resource) component will also come into play (not before).

Financing Merrill-Crowe could come via a gold loan or an NSR (author thinking out loud again).

This positive cashflow—targeting roughly $1,000,000 per month—will allow the Company to self-fund exploration across its extensive land base, augmenting the current ounce count.

And this is where it gets interesting… this resource represents only a fraction of what lies in the Sangihe’s subsurface layers. 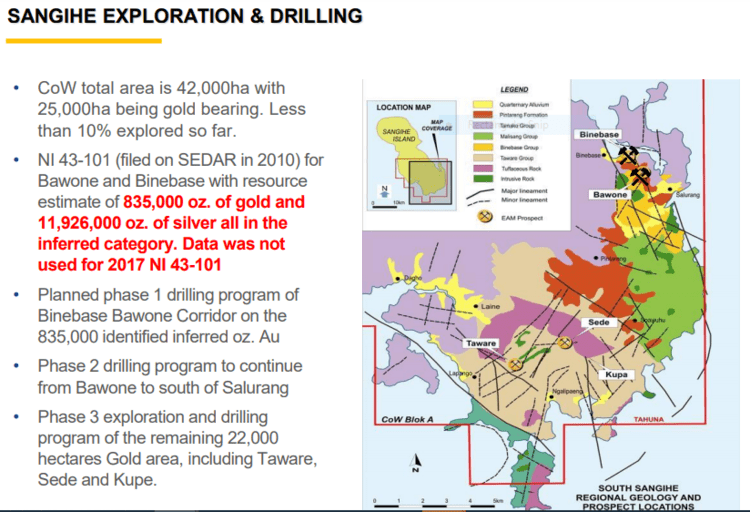 According to Baru’s chief geologist, Frank Rocca—a former Barrick man—Sangihe holds the potential for at least 2,000,000 ounces of Au along its 25,000 geologically prospective hectares.

Less than 10% of the region has seen any form of modern exploration.

A planned phase one drilling campaign along the Binebase-Bawone Corridor will put these inferred ounces into play.

I had a good chat with Baru’s CEO, Terry Filbert, shortly after this landmark headline dropped yesterday morning.

It was here that I learned of the Company’s (budgeted) plans to drill 35,000 meters over the next year-plus. Two rigs, all reverse circulation (RC).

We should see roughly half of that target—17,500 meters—drilled between July and December of this year.

35,000 meters is an aggressive campaign.

An example of Binebase’s exploration upside—previous probes with the drill bit tagged the following values:

Between construction-production updates and drill hole assays, newsflow is going to be extremely robust moving forward. And this doesn’t factor in the news that may flow out of Baru’s 3,140,000 ounce Miwah project.

This licence provides Baru Gold with the rights to operate precious metal mines on 42,000 hectares on Sangihe Island, of which only 10% of the area has been geologically explored to date. Exploration will be upgraded through a resource development drilling program and will be expanded to other areas of the CoW once production cashflow has been initiated.

The Company intends to proceed to production without the benefit of first establishing mineral reserves supported by a feasibility study. The Company cautions readers that any production decision made by the Company will not be based on a NI 43-101 feasibility study of mineral reserves that demonstrates economic and technical viability and as such, there may be involved increased uncertainty and various technological and economic risks such as the interpretation of drill results; the geology, grade and continuity of mineral deposits; the possibility that future exploration, development or mining results will not be consistent with our expectations; commodity and currency price fluctuation; failure to obtain adequate financing; regulatory, recovery rates, refinery costs, and other relevant conversion factors, permitting and licensing risks; general market and mining exploration risks and production and economic risks related to design and engineering, manufacturing, technological processes and test procedures and the risk that the project’s output will not be salable at a price that will cover the project’s operating and maintenance costs.

The existing CoW license for the Sangihe gold project is a 30-year license and under the recently issued 2020 mining regulations can be extended for 20 years. This CoW production status upgrade also gives the Company rights for refinery and export licences.

“Since 2017, I have been focused on bringing the Sangihe gold project into profitable cashflow production. After four long years we are now clear of obstacles to accomplish this goal.”

“I would like to thank the MoEMR for their diligent support in expediting Baru Gold’s request to issue the production licence upgrade despite their office closure during this second wave of COVID-19 sweeping through Indonesia that has caused both government and https://e4njohordzs.exactdn.com/wp-content/uploads/2021/10/tnw8sVO3j-2.pngistrative delays.”

While waiting for the issuance of this license upgrade, Baru management wasn’t resting on its laurels…

“The Company has taken many steps to fast-track the heap leach construction target. We have mobilized our mining team to the site, started hiring local residents for the many construction and production positions, identified land acquisition targets required for the project, and undertaken steps to mitigate any environmental impact we may have on the island.”

Adding depth to the Baru team, a new hire—Joe Keane—boasts over 40 years of heap leach production and mine processing experience.

“Joe adds to the wealth of knowledge and experience the Company presently has, and will be instrumental in bringing the production online as quickly as possible.”

“Baru Gold is no longer a junior exploration company. The Company is moving towards generating cashflow from a self-sustaining operation. With its low cost of production and the rising price of gold, the Company expects its expanding profit margin will enable its expansion of the mines production and detailed exploration of the entire CoW. Targeted start up of the heap leach operation is mid-2021.” 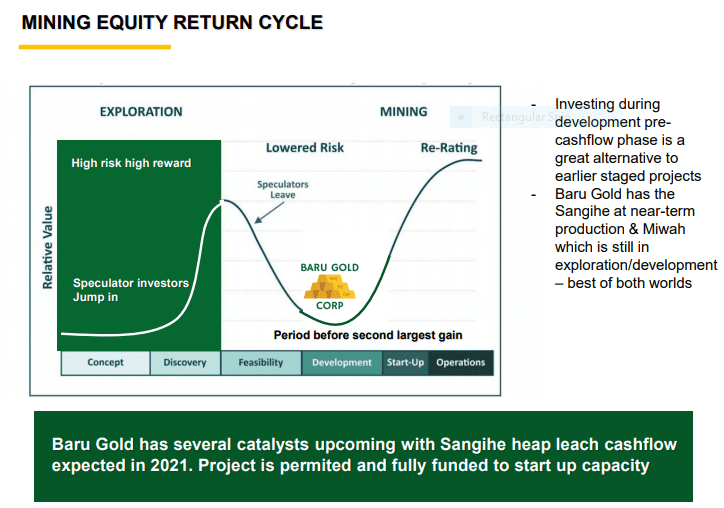 As noted further up the page, I had a good chat with CEO Filbert shortly after the trading halt was lifted yesterday am.

The budgeted 35,000 meters of RC drilling, much of which will be resource (category) conversion drilling, was a key takeaway. The following are additional notes taken from that conversation:

Baru is targeting 80% of its employees from the local community.

Roughly 20% of the employees will be non-local but will come from other regions within Indonesia.

Only three ex-pats will round out this crew: CEO Filbert, Garry Kielenstyn (General Manager), and Frank Rocca (Chief Geo).

By mid-March, there should be 100-plus workers active on the site pushing in roads, constructing the heap leach pads, stripping overburden, etc—a process expected to run six weeks.

The Company isn’t purchasing any big-ticket items (dozers, excavators, dump trucks, etc). Everything is available for lease on the island—local contractors will participate via the tender process.

Local farmers will be commissioned to grow seedlings reclaiming the mined-out areas.

The wives of said farmers will be employed to provide meals for the mineworkers.

Baru intends to put as much money back into the local economy as possible.

Baru’s project pipeline also includes Miwah, a project that pushed the Company’s market cap to a lofty $800M valuation back in 2011. 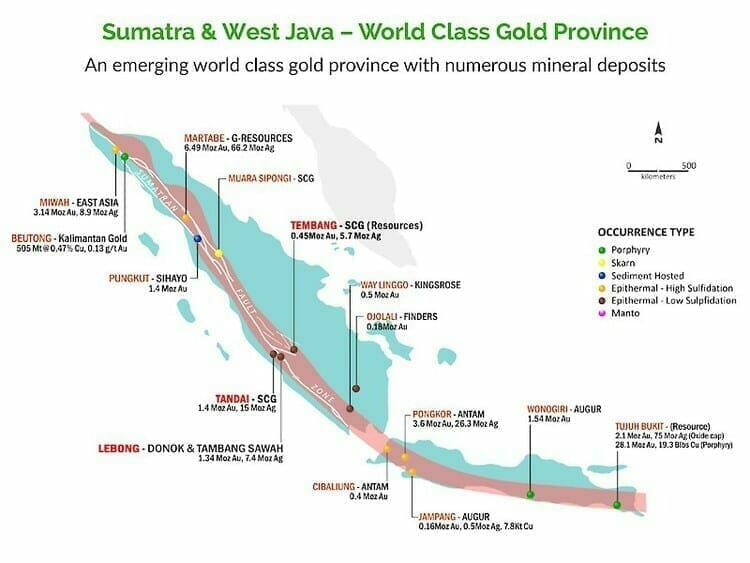 The deposit is open along strike, across width, and at depth. 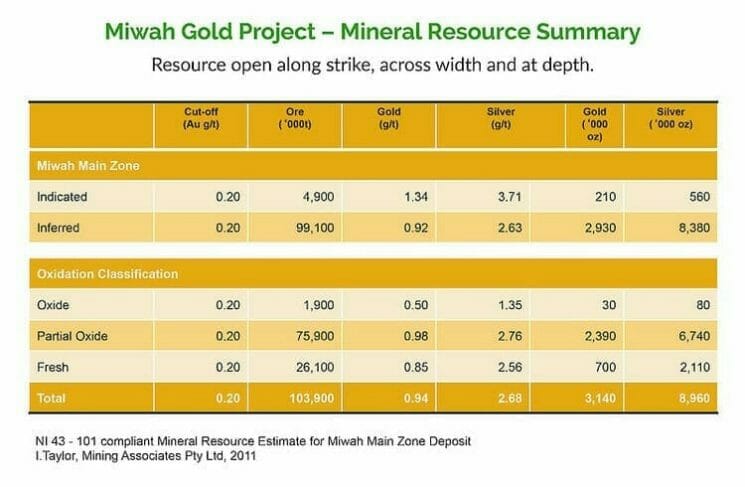 Though currently sheltered as Protected Forest Reserve, this restricted access will be repealed once outstanding land taxes are settled and local stakeholders are confident that this Baru crew is the real deal—that CEO Filbert and Co are responsible project developers and operators.

Miwah, with its optionality upside, should enter into the Company’s newsflow in H2 of 2021.

The mood of the market is all over the map right now. Baru shares tagged a high of $0.215 yesterday, on massive volume, before settling back with only a modest gain.

The Company has entered a dynamic new phase in its evolution as a near-term Producer and ExploreCo.

Newsflow, for all the reasons highlighted above, should be robust going forward.

Full disclosure: Baru is an Equity Guru marketing client. WE own shares, so… color us biased (do your own due diligence).