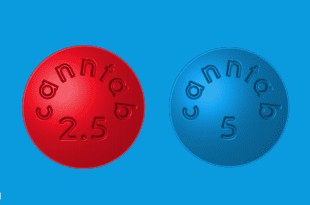 If we’re honest about it – if we’re REALLY honest about it – Canada has fumbled its advantage in the cannabis sector. First to market, first to raise hundreds of millions in financing, first to legalize, first to recreationalize (not a word but I’m on a roll), and it’s all really been for naught.

In a sector where the law says you’re not allowed to market yourself, low prices offer one of the few ways to grow market share while also kicking off a race to the bottom. Premium suppliers would suggest they have an advantage, but since they can’t advertise that premium status in a meaningful way, they have to rely on word of mouth and organic growth which, with hundreds of competitors vying for space, isn’t a path to riches.

The cannabis products available in Canada are hemmed in by hand wringing legislators and regulators, the black market continues to thrive, and quality standards are a long way from the old days of ‘BC Bud’ being world renowned as the cream of the crop.

And even if all of the above doesn’t put you off the Canadian weed market, purchase limits and potency restrictions force heavier users to either make daily purchases to keep their cupboards filled, or stick with the guy behind the dumpster who they used to buy from in the 90’s. Meanwhile, retail is hamstrung and bottlenecked by government distribution models and retail rules that force you to lock your product in plastic bubbles and wrap it in adult-proof, waste-heavy packaging.

So if everything is awful on the Canadian scene, why am I writing a story about a Canadian cannabis company?

Look, anyone in Canada who wants to smoke weed has now done so. The scalability of that market only exists in as much as you can convince people who have never smoked week to start doing so now. That’s tough going. The folks I know who aren’t traditional marijuana enthusiasts but wouldn’t mind a buzz or a health boost, want gummies, chocolates, beverages at a push, drops, and capsules. We don’t take wine to a BBQ anymore, we take edibles.

But all of the above have a major problem in that those products are notoriously unreliable. Drop a gummy, notice no effect, drop another and your face melts off. Share chocolates with your friend, watch her roll around giggling while you’re thinking about your taxes.

Just last night, as I was prepping this story, I took a little edible before bed to get some smooth sleep, and the next morning I was still tripping balls.

ENOUGH. I want a measured dose of the good stuff with a time release, from a trustworthy supplier, so I can microdose and not disappear into my couch. But there’s no real option for me in Canada.

The existing capsules out there are, to say the least, janky. 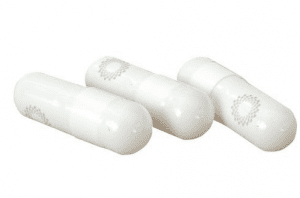 The capsules to the right are Dosecann’s product, and they’re fine I guess, but they’re mostly a CBD hit. The gelcaps put out by Daily Special, Redecan, Tweed and others are also either CBD hits, or 5mg of more of THC – good to get you high, not so great as a microdose option.

The problem is, these options aren’t slow release. You hit ’em, and they hit you back. If they have a consistent and accurate dose, that’s a win, but they don’t always. And because getting them to you in Canada is an expensive and annoying exercise, a 1mg THC option doesn’t make financial sense.

If only there were someone, somewhere, that could provide a slow release, pressed pill option, with total accuracy and consistency such as you’d find in a big pharma medical product?

Hell, if a company like that existed, and had defendable IP related to that product, well that could be a monster.

Canntab Therapeutics is the industry leader in solid oral dose formulations of cannabis with a product line of cannabinoid (THC & CBD) and terpenoid blends in exacting dosages. With one US Patent granted on September 17th of this year, and 13 more patents pending in Canada and the United States, we are well positioned to dominate the medical cannabis market with a range of hard pill cannabinoid formulations that provide doctors and patients with a medical grade solution not currently available.

But when you have the patent on solid oral dose formulations of cannabis, yeah – you’re the industry leader in that.

Here’s why a hard-pressed pill beats the soft gel or cap:

Canntab hasn’t really told its story in a big way just yet, going public in 2018 but having to wait for licensing before it could really get going. When that licensing landed, in early 2020, we had a pandemic to deal with, so the stock has largely being tossed about by the tide rather than propelled by its own excellence.

But now that’s starting to change. The rubber is hitting the road.

Canntab Therapeutics Ltd. has completed its first delivery of two of a total of five stock-keeping units ordered by MediPharm Labs Corp. Further to Canntab’s press release dated June 2, 2020, the company confirms that the total purchase order is approximately $1.3-million. Canntab intends to complete and deliver the entire order by the end of 2020.

This is big news. Medipharm Labs isn’t small potatoes, it’s a $100m company, and a $1.3m order over the coming year gets product out without the Canntab folks having to do the heavy lifting of sales, marketing, and distribution. It also demonstrates the science and product work well enough for another player to want to rep it.

You wanna replace opioids? This is how you get it done. And by owning the patent, they don’t even need to develop their own products; Canntab can license the tech to others, penetrating other countries without the capital spend.

The Medipharm deal isn’t exclusive, so one would expect more to follow. In fact, they did a deal to supply an Australian company in October, which will lead to a large medical research trial in that country.

In addition, Canntab just did a $1.5m debenture financing at 10% p/a, which isn’t horrible and gets them some breathing room and marketing dollars – both good things for investors.

Lastly, folks are starting to notice. Look at that trading volume lifting.. 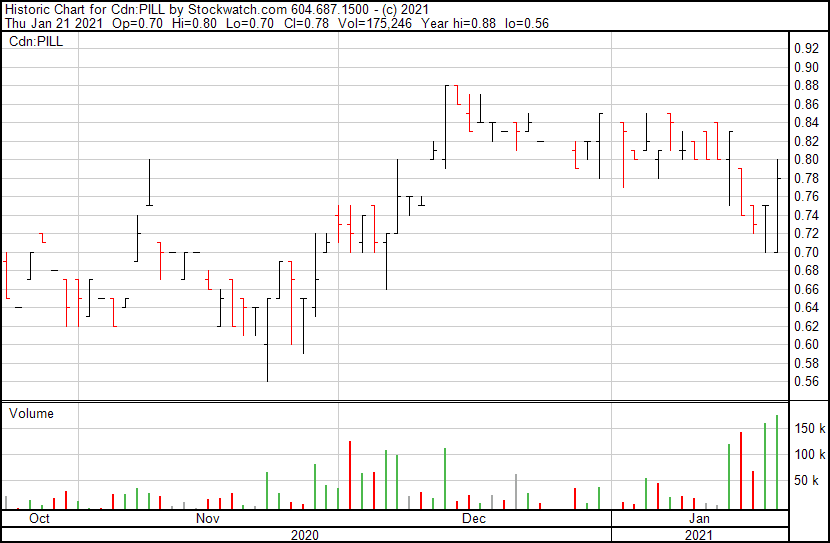 I asked management recently what I see as a very important question; that being, can their tech be used for psilocybin (big 10-4, good buddy) and can the multi-layer tech be used to integrate psilocybin with cannabis in one pill, to create a more intense shroom high with the calming aspects of the weed element.

Confirmed, however the company isn’t actively working in that direction right now for three reasons;

I can respect all of that.

Let’s be very honest about this – I haven’t given a moment’s thought to Canntab until they walked into our office a few weeks back and announced it was go time, and what I’m seeing makes a lot of sense to me. You can criticize the company for being slow to market, though I’d argue much of that was outside their hands, and you can argue that exposing consumers to a brand new SKU will take some time to penetrate, which is fair.

But my doctor, who is as progressive as they come, won’t prescribe cannabis to his patients because there haven’t been the required clinical trials, he doesn’t trust the existing products, and he wants to be sure the dosing is accurate.

Canntab gets us closer to that than any other company has. Time to take them seriously.