Mogo (MOGO.T) announced today that they extended their bitcoin rewards program to include their Mogo Visa Platinum prepaid card and digital spending account, according to a press release.

Starting this month, every purchase Mogo users make their MogoCard will net them 1% bitcoin cash back rewards, deposited into their bitcoin and rewards account. It’s exclusive to members who refer a friend to Mogo.

“Consumers today want a modern rewards program that can really have a big impact on their lives, versus legacy travel rewards. With bitcoin increasingly going mainstream, millions of Canadians are looking for a way to participate in this new asset class. This new program enables anyone to begin accumulating bitcoin, without risking their own money, while also controlling their spending and offsetting their carbon footprint, with no monthly or annual fee. Unlike traditional reward programs, bitcoin has the unique characteristic of being an asset class that can rise in value, as we have seen recently, and we’re excited to introduce a reward program that can potentially help members build wealth by accumulating bitcoin,” said David Feller, Mogo’s Founder and CEO.

Mogo calls itself a financial technology company, but they’re largely regarded as an almost pure crypto-play nowadays. Their value proposition is is in their financial services, such as their prepaid Visa Platinum card, but they include a few value-adds to help differentiate them from anyone else in the market. A few of these include free monthly credit core monitoring, ID fraud protection, personal loans and a carbon offsetting program wherein the company offsets one pound of CO2 on the customer’s behalf every time the customer spends a dollar using their programs. The app also gives its members 24/7 access to the Bitcoin market and therefore the ability to buy and sell the cryptocurrency, as well as access to their bitcoin rewards program as above. 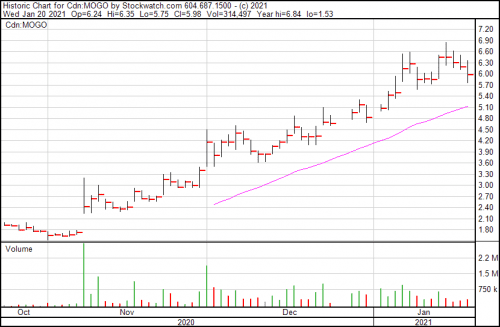 Even thought they’re down $0.20 today, Mogo is one of the companies taking advantage of the Bitcoin bull run, having leapt to an easy triple in the past three months. Mogo is now trading at $5.99.