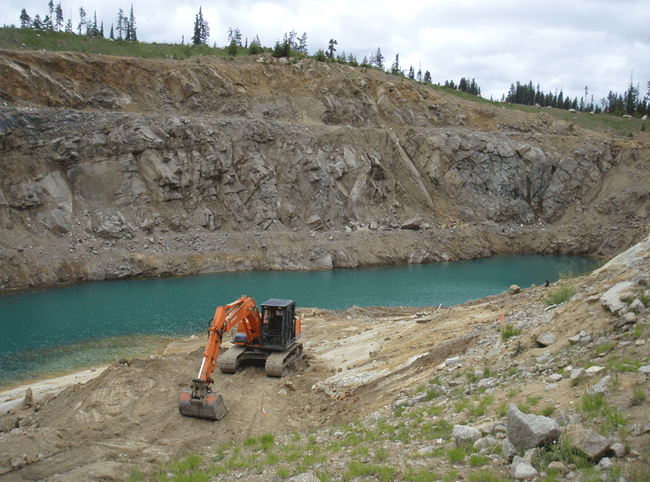 “Over the next six months our goal is to finalize the details required to bring the Elk Gold Project into production, as well as look to continue onto Phase 2 of our drill program.”

Gold Mountain (GMTN.V), having made its market debut only a few weeks back, has set this aggressive timeline for its flagship Elk Gold Project, a historically productive mine located roughly 57 kilometers from mining-friendly Merritt, BC. 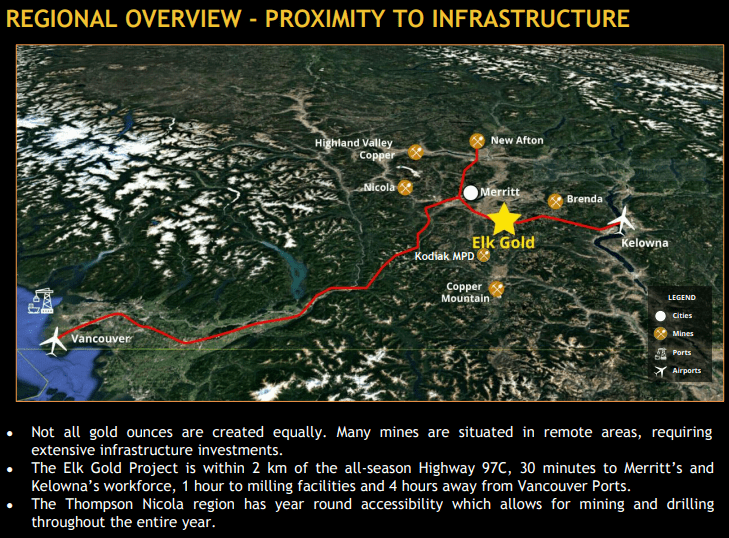 “The increase in gold price in 2020 has further highlighted the opportunity outlined in the Elk Gold Project PEA. Last year was about laying the foundation of our plan. This year will be about bringing it to life and delivering on our commitments to our long-term shareholders and supporters. In our view, this is BC’s next Gold producer.”

When Chris Parry informed me that Gold Mountain was coming on as an Equity Guru client, I was immediately quieted in deep reflection, transported back to a time when I worked with a high production reclamation crew in the region. We descended on the area every October after seasonal rains quenched the semi-arid ground, planting a 2-meter grid of everything from Lodgepole Pine, to Blaze Maples, to aromatic Sage on the tailings and waste rock surrounding several of the mines in the region (fond memories of intense, backbreaking work and fat production bonuses).

I poached the quote at the top of the page from Parry’s Jan. 19th write-up, where he went on to state:

“That aggressive timeline doesn’t suggest GMTN will be pulling ore out of the ground in a meaningful way in six months time, but it does suggest the company is quickly moving toward being permitted for small scale production, the revenues from which will help the company explore outwards and grow faster than they might if they spent another few years drilling.

Usually, explorers will keep drilling until they have such a large mineral resource, or sizeable, profitable-looking PEA, that other, larger explorers might come in looking to take over. But GMTN CEO Kevin Smith has no time for ten-year plans. He knows there’s ore out there, knows where a bunch of it is, and feels like he can set GMTN up to start small, and scale fast.”

The project’s (pit constrained) resource currently stands at 454,000 ounces in the measured and indicated category and 95,000 in the inferred category.

The grade is impressive for an open-pit scenario—5.33 AuEq ounces per tonne for the measured and indicated component.

This modest high-grade ounce-count is only a prelude to what may ultimately lie in Elk’s subsurface layers.

The exploration upside here is substantial. The Siwash North zone holding the current resource is open along strike and at depth. But there are eight additional (known) mineralized zones, all showing similar grades and structure.

Gold Mountain is currently in the midst of an aggressive 14,000-meter drilling campaign, one designed to bulk-up the Siwash North resource, as well as define additional mineral inventory along the highly prospective zones highlighted on the above slide.

“It is unique to have an asset with this amount of drilling and exploration data,” the Company stated in its Jan. 14th Corp Update.

The low AISC—a metric that estimates all direct and recurring costs—is the upshot of mining high-grade rock and a simple scoop-the-ore-right-from-surface orebody.

As some of you may have guessed, the low CAPEX—the cost of building the mine—factors in a toll milling plan, that is, using existing infrastructure outside the project area to process the ore.

The Elk Gold project has already been pushed substantially along the development curve, with many of the components already in place. 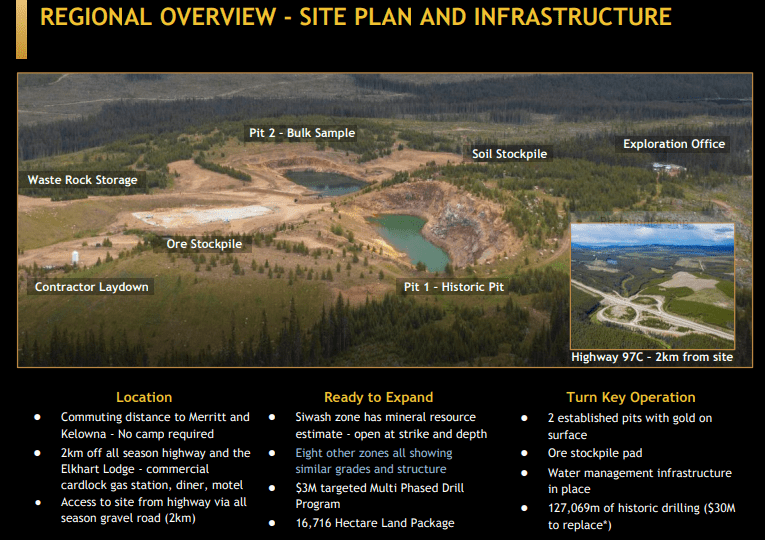 The contents underpinning the following Jan. 19th headline explain how this aggressive, six-months-to-first-gold-pour plan will all come together…

Here, the Company announced having signed a definitive agreement with Nhwelmen-Lake LP for contract mining services to advance the Elk Gold project to the production stage.

Nhwelmen-Lake, operating out of Vancouver B.C., is a majority-owned, Indigenous mining contractor with a proven track record of successful operations. 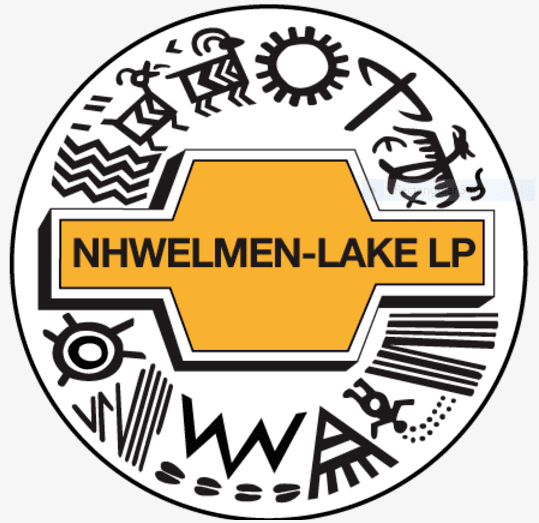 Aligned with the 2020 Elk Gold Project PEA, Nhwelmen-Lake will be paid a fixed price per tonne for the ore mined over the first three years (based on the planned production rate, mined volumes, haulage distances, and equipment productivity).

The scope of this contract includes: producing at a rate of 70,000 tonnes per annum (200 tonnes per day), waste mining, drilling, blasting, hauling, site supervision, the supply of operating personnel, road maintenance, dust suppression, plus ALL the site preparation activities required prior to kick the operation into gear (topsoil stockpiling and preparing surface water management structures are also included under the terms of this contract).

Nhewelmen-Lake will also haul the ore grade material from the mine to the toll milling location at a fixed unit cost as per the PEA.

The Mining Contract is for the life of the mine while the price schedule carries a three-year term. This will give Gold Mountain confidence in its forecast and cash flow to scale the operation efficiently.

“The Mining Contract lays out a partnership that gives Gold Mountain certainty in its mining and ore haulage capital and operating costs. Nhwelmen-Lake will leverage its experience in mining operations to ensure that the Elk Gold Project is operated in a safe, efficient manner while protecting environmental and cultural resources.”

Of course, developing a mine in a top-shelf jurisdiction, like B.C., requires that all permits need to be in place. Gold Mountain is the home stretch in that regard.

“Gold Mountain is pleased to provide an update on the progress of the Joint Permit Amendment Application that was submitted in May 2020 (the “Permit”). The Permit was accepted through the application screening phase of the application review and Gold Mountain has responded to the first round of technical review questions that were provided by the Ministry of Energy, Mines and Low Carbon Innovation, the Ministry of Environment and Climate Change Strategy and the Ministry of Forests, Lands, Natural Resources and Rural Development. Gold Mountain is anticipating a second (final) round of technical review questions from the regulators in the coming months prior to completing the Permit review process. The commencement of production at the Elk Gold Project is subject to Gold Mountain’s receipt of this Permit.”

This Jan. 19th press release further states that the Company’s obligations under this contract with Nhwelmen-Lake will begin upon the delivery of a Notice of Commencement—Gold Mountain anticipates being in a position to deliver this important (Game On) document following the receipt of its mining permit and additional project financing.

“We started this company with an early commitment to transparent and inclusive conversations with the Indigenous communities in the surrounding regions of our project. This contract is a result of those commitments and shows management’s ability to deliver key partnerships in order to not only put the Elk Gold Project back into production, but also provide local communities an opportunity to participate. The Nhwelmen-Lake partnership is a major milestone for Gold Mountain and its shareholders. Having an established mining contractor and solidifying a well-defined cost structure, is one of the key pieces necessary in order to confidently go into production. Creating thirty full time job opportunities to the various communities in our region allows us to root ourselves in the long-term development of the local economy“.

It would appear that management isn’t satisfied as a single asset company. In the Jan. 14th Corp Update, CEO Smith stated the following:

“Our technical team continues to assess similar underappreciated, high-grade deposits here in British Columbia, and the greater Canadian region, that have large historic investments in resource development and require relatively low CAPEX to get into production.”

Bring it on fellas.

Gold Mountain has a current market cap of $42.12M based on its current 48.97 million shares outstanding and recent $0.86 close.

Full disclosure: Gold Mountain is an Equity Guru marketing client. We own shares.