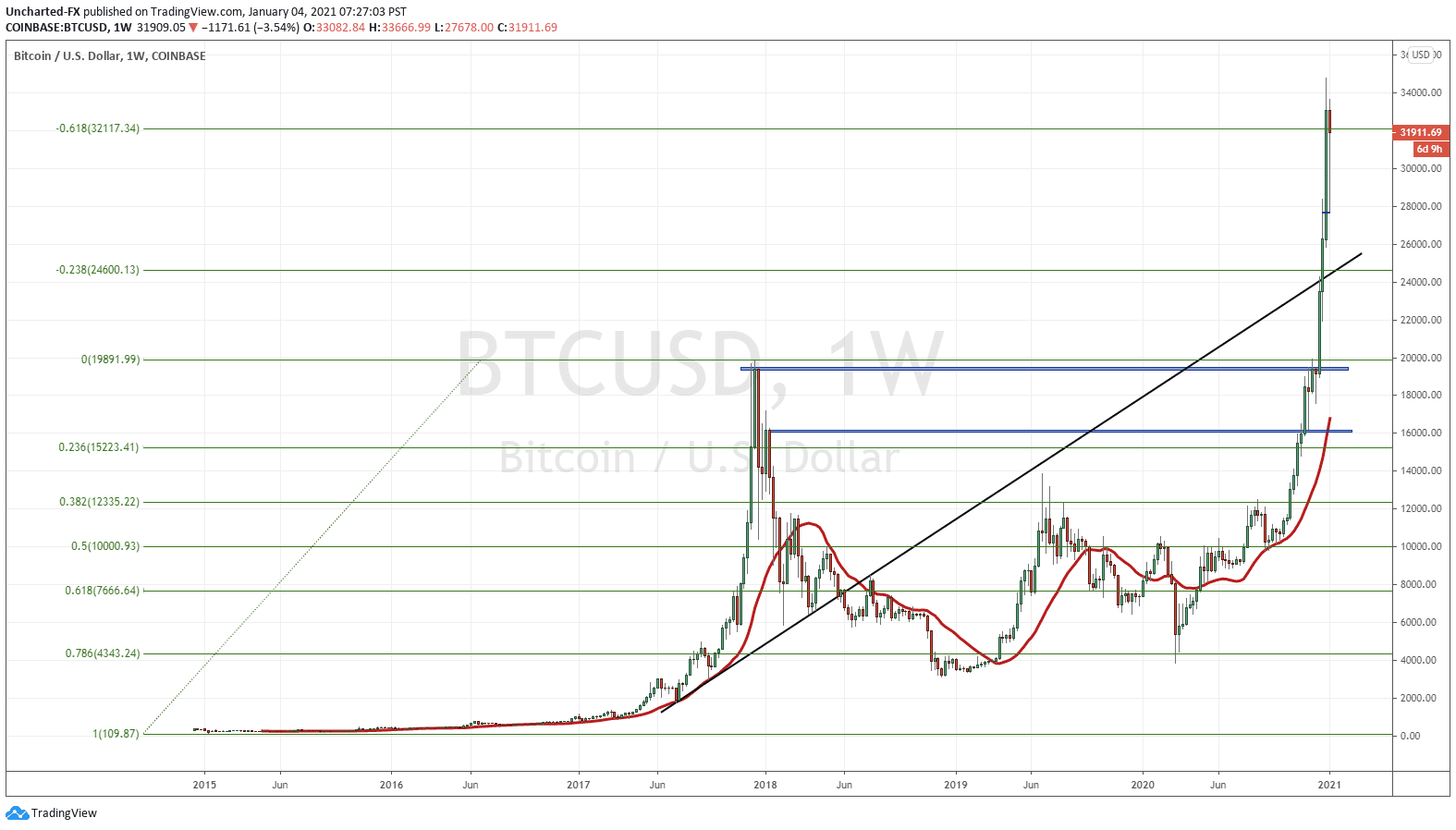 The Rise and Rise of Cryptocurrency. Bitcoin Price Targets Breached!

Amazing Price Action on Bitcoin this weekend. Bitcoin has risen $500 almost everyday since November. Institutional money is flowing in. We have heard about Square’s acquisition of Bitcoin . We have heard of Paypal’s wallets and adoption of cryptocurrency. There have been reports that many other whales have been taking part in the recent Bitcoin move.

The most interesting for me has been Billionaire Stanley Druckenmiller. A well respected and admired investor. In November, he said that he owns some Bitcoin because has has ‘warmed up’ to the idea of the cryptocurrency being a store of value. Maybe not a coincidence that Bitcoin began having many $500 plus days after Mr. Druckenmiller’s comments.

Why do I find his comment very interesting? Because it has been my case on the rise of Bitcoin . This is the trade out of fiat currency. Don’t forget, Stanley Druckenmiller is still big on Gold , along with Ray Dalio. The idea was to be out of cash. ‘Cash is trash‘ as Ray Dalio put it.

My followers and readers have been warned about this set up for sometime. Central banks really are stuck. Whatever you think about covid, the truth is that the monetary and fiscal response to the virus will be doing some damage.

Central Banks have been expanding their balance sheets, and are slowly morphing into the buyers of last resort. They will be the most powerful institutions in human history. In the currency war arena, Central Banks are attempting to weaken their currencies to boost exports and inflation . It is a race to the bottom. Certain central banks (like the European Central Bank ) are finding it difficult to weaken their currency against the US Dollar, even when they expand their money printing. Cutting rates is next. Many Western Central Banks have already cut rates down close to 0. Negative rates are next. For Central Banks that are already at negative, again like the ECB, they will have to cut deeper into the negative in an attempt to weaken their currency. My readers are familiar with this, and why we expect the ECB to cut deeper into the negative sometime before March.

On the fiscal side, the US has passed a 900 billion covid stimulus bill AND a 700 plus billion defense bill within two weeks. Governments are taking more debt which means they will have to increase taxes, and/or see rates at negative to service the large amount of debt. Again, this puts pressure on the currency. Cheap and easy money is here to stay. It will not stop. It cannot stop. The middle class loses in the end.

This is why I have been warning that the trade is to be OUT of fiat currencies. Stocks remain the best way to beat the inflation and make yield in this world, but the truth is these gains can be rendered useless if the currency is devalued. If you look at the Great Depression, stock markets in Germany and other nations were going up, but the gains were useless since it did not protect your purchasing power. Hard assets such as Gold , Silver and other commodities will be the way to protect one’s purchasing power going forward. My followers know that I have included cryptocurrency to this list.

This is what people like Ray Dalio and Stanley Druckenmiller are warning us about. We have not even begun to see the crazy monetary and fiscal policies, but one can predict and front run this.

The other argument is that Bitcoin is the future, and corporations and institutions are buying it because of adoption. I would be careful about that. Many of you know my idea on central bank digital currencies (CBDC’s). Digital money is coming in order to track and tax money. It makes sense that this move into Bitcoin could be frontrunning this reality. Technically, Bitcoin and other crypto’s would be a way to hide your money from the government. But do NOT underestimate the power of central banks. They want to ensure they maintain the only power to issue currency. Sooner rather than later, they will begin to pay attention to this move in Bitcoin .

Going back to the move out of fiat theory, this move in Bitcoin becomes worrying. It means something could be around the corner. Be careful.
Why hasn’t Gold or Silver reacted to this just yet? Banks can short the paper contracts. I do believe that banks such as JP Morgan have been shorting the paper markets. Honestly, other nations have an incentive to do so too. Lot has been said about China stockpiling Gold. Russia and Turkey are included in that group. What Jim Rickards calls the Axis of Gold. If I were them, I would be short selling large paper contracts to keep prices low while stockpiling. If you were to add to your stockpile, you would want to do so at low prices. 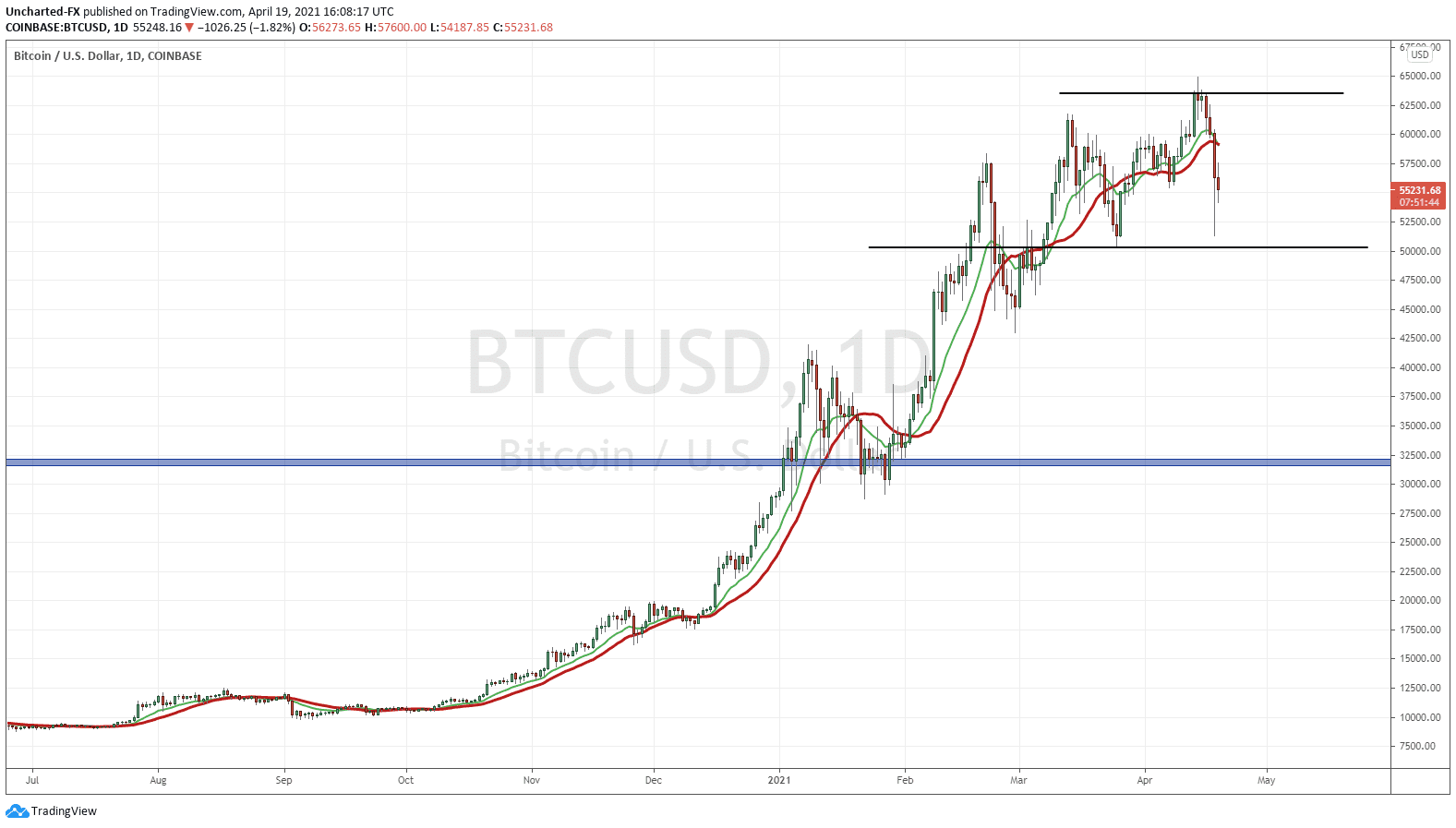 Onto the technicals of Bitcoin . Fibonacci is a technical tool we can use to predict price targets when we have no support and resistance levels to work with. On my chart, I fibbed the previous lows and all time highs of Bitcoin. My first target at around 24,600 was important because it coincided with a trendline going back with multiple touches.

This weekend we have actually hit my second fib extension. Flew past it in fact. Bitcoin has almost touched 35k.

Now my followers know that nothing moves up forever. I also warn against the fear of missing out (FOMO). When you want to chase a move because you feel like you’re missing out, you have missed out. Be patient. I believe a pullback will have to come eventually.

When this does, I want to see how price reacts at the fib extension level at 32,100. Generally, once the second fib it hit, we tend to see a pullback. Now I am not saying it could pull back this deeply, but I personally would love for Bitcoin to pullback to 24,600 which coincides with the all important trendline level.

On that note Bitcoin DID break below 32,100 overnight, and actually hit a flip zone (an area that has been both support and resistance in the past) at around 27,600. Buyers stepped in and took Bitcoin back above 31k.

There is a possibility we pullback to retest previously breakout zone at 20,000 before continuing higher. This would be the ideal scenario as it would meet all our market structure criteria. But truth is that the momentum might just be too strong for a pullback that deep. Buyers will keep buying up the dips.

Crazy times folks but this move in Bitcoin was predicted. This is the move out of fiat in my opinion. Higher targets are coming, but I would like to see that broader pullback first.

In tomorrow’s Market Moment, I will go over the chart of Ethereum. Stay tuned!