Core One Labs (COOL.C): Out of the ashes, a new business model and supportive shareholder base

In my experience with the North American public markets, few companies and executive teams got more lucky with their shareholder base than Lifestyle Delivery Systems. Their initial pitch was simple – they’d put extracted cannabis on thin film strips for easy and precise ingestion – and I, along with a ton of others, shoveled money at them.

This money was quickly drained and their stock quickly dipped, and excuses made. But a lot of those investor stayed in because they believed in that end product.

Then the product didn’t come and excuses were made, but investors stayed in because hey, it’s a new industry with changing rules, and besides, those strips were gonna be rad and nobody else could do them but LDS.

Then the machines were delayed, then they had issues on the install, then the laws changed, then they changed again, but hey – other companies were going under entirely, so the bagholders hung in because, next quarter for sure!

Then the next quarter brought losses and no product, so I rolled out CEO Brad Eckenweiler and made him stand in front of those machines on a livestream and prove they existed, and he swore he was sorry for all the missed targets but THIS QUARTER FOR SURE. And, because his shareholders were a bunch of faithful, loyal, forgiving people – the stock price jumped 30%.

And then the next quarter came and still no product.

And the shareholders HUNG. IN.

Now, in hindsight we can say they were silly for falling for the ongoing ruse but, goddammit all to hell, as an industry we should celebrate those that will forgive a CEO who promises more than he can deliver, and misses deadlines in a changing regulatory environment, and takes wild 3-point shots from downtown that clang off the rim, because when the struggle is real and a young company fails through no fault of its own, you WANT those sort of shareholders around. The ones that will say, “Maybe I’m an idiot, but he seems apologetic. I’ll give him another quarter.”

Those are the shareholders that make this industry run, and those management teams that luck out and find them buying into their company need to treat them with respect and dignity because not every company gets that chance and squandering it should be a crime harshly punished.

Which is why, last week, when LDS officially died and it’s ancestor, Core One Labs (COOL.C) came public with a new team and a new plan, gravity was defied.

Having halted at $0.73, rolled back, last raised money at around $0.19, and been delayed by an exchange-driven change of business process, COOL’s eventual return to trading was expected to see a massive sell-off, maybe even down below that $0.19 range, as long suffering retail folk abandoned ship.

I said right here on this website that, despite COOL coming back as a client of mine, folks shouldn’t buy it for a while. That they should wait for the dust to settle. That it may well be apocalyptic for a bit.

BUT THE BAGGIES STAYED TRUE.

You have to love them – the long suffering shareholders of LDS, way underwater and beaten like a mule, with their money locked in while other opportunities came and went FOR YEARS, looked at the new management team, a new business plan, and said, “Imma give you guys one more chance.”

COOL never came close to that $0.19 range when it resumed trading. Instead it hovered around $0.30, and then did what I thought might have been impossible… it began to rise. 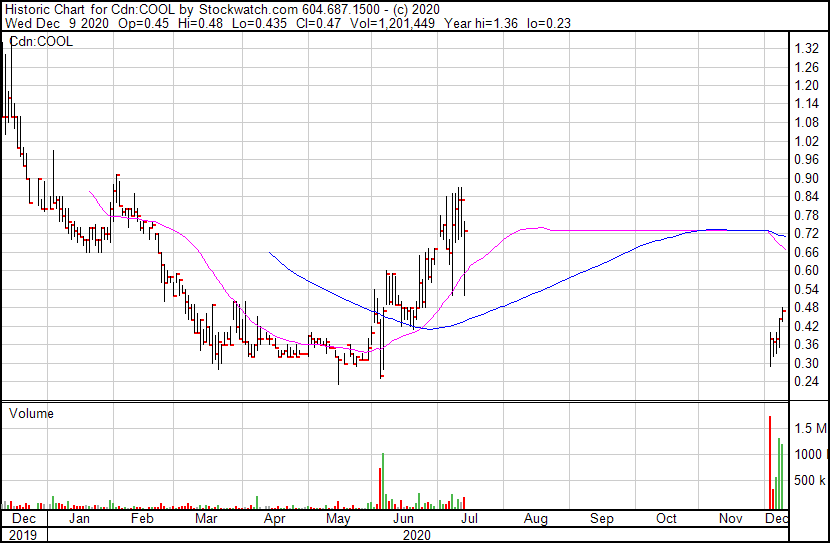 Today, as I write, COOL is hitting $0.48, with significant volume showing, sure, some folks are taking the chance to end their LDS-COOL phase, but others are seeing what’s to come, acknowledging the old guard are gone, and climbing in for the first time, seeing value and a firm base.

That trading volume isn’t falling, by the way. It’s growing with every passing day.

Those long suffering shareholders that trusted and were betrayed, and trusted again and were betrayed again, are now feeling like they’re into something that will respect and reward them and, by Jesus, in every call I’ve had with COOL’s new executive team, the constant has been that this company, in its new form, will do just that.

The first time I spoke to them with a return to trading imminent, I said I wouldn’t tell anyone to buy the stock opening day, and they replied, “You shouldn’t.” They wanted folks to be clear of the blast zone and evaluate the stock on its present and future, not on someone else’s past. And that’s what happened.

Then I asked them why they weren’t blasting news out to fight that drop, and they said, “We’re not here to promote, we’re here to do business. News will come when were doing business.”

This is the anti-LDS.

Now, I see the chatter on various social media platforms among those who have been holding in forever, and boy do they want news and promotion and upward movement, but there’s also a sense of calm. Of, ‘we’ve been here for so long, it’s going to be okay if we wait a bit longer..’

And the COOL brainstrust knows this. So here’s what they have planned going forward.

Core One will sell, and has sold, non-core assets (hence the name?), leaving the one they really value – that strip making facility. That facility will be utilized to make strips for the shroom sector. Simple synthetic psilocybin strips, with a constant dose, easy application, and fast onset.

“Psilocybin on a strip?”, I hear you say. “Who even has that technology?”

Core One Labs Inc. has entered into a letter of intent (LOI) dated Oct. 1, 2020, to acquire all of the outstanding share capital of Vocan Biotechnologies Inc.

Vocan is a genetic engineering and biosynthesis research firm developing a proprietary fermentation system for the production of psilocybin API. Vocan’s mission is to use science and technology to advance the knowledge of natural-based medicines for the treatment of mental health illnesses, including addictions. Vocan’s team of scientists, specializing in protein expression and biosynthetic fermentation, has discovered a patentable method of producing psilocybin, the active ingredient in psychotropic mushrooms, and its technology will produce cGMP (current good manufacturing practices) API-grade psilocybin, which can be used by pharmaceutical companies, API manufacturers and medical research organizations conducting clinical trials.

Take your mushroom growhouses, set fire to them overnight, and make your insurance claims in the morning because, if these guys are real, they’ll be creating the good stuff in vats and selling it on/licensing it to any company that requires a consistent, inexpensive supply of psilocybin going forward, with patents protecting the backdoor.

ARE THESE GUYS REAL?

Robert Hancock is a leading researcher at the University of British Columbia, a Killam Professor of Microbiology and Immunology, and a Canada Research Chair in Health and Genomics. Receiving his PhD in 1975, he has become one of the worlds most highly cited researchers. He is  a co-founder of several companies, both private and public, including  Migenix, Inimex, ABT Innovations, and Sepset Biotherapeutics. He has won  major health research awards and is an Officer of the Order of Canada.

Hancock’s Migenix was sold to serum giant Biowest in 2010. Inimex continues to do business as a private company a decade plus after it was created. UBC spun off ABT Innovations to Hancock, and that body continues to do work on matching peptides with antibiotics, and Sepset is working on a “diagnostic assay for the early and rapid diagnosis of sepsis.”

Hancock ‘has published more than 680 papers and reviews, has 55 patents awarded, and is one of the most highly cited authors in Microbiology and Immunology with more than 67,000 citations.’

The only citations Eckenweiler received were these:

Cheap shot, I know, but when the second Google search result for your name is a ban from the BCSC, the jokes write themselves.

Core to the new Core One business model will be not just developing the psilocybin API, but protecting it. Getting patents isn’t always a simple thing, so how do we know COOL will?

Dan Polonenko is a principal and patent agent with Gowling WLG. His practice involves patent drafting and prosecution in the field of life sciences. Additionally, Dan provides business-focused strategic IP and  technology commercialization services. A registered patent agent in both Canada and the United States. Dan has over 20 years of experience in the  Canadian biotech industry.

How about licensing? Canada can be perilous for those wanting licenses to handle banned substances for research and development.

Jay Van der Vlugt is a trained biochemist with extensive experience working with narcotics and controlled substances over the last 6 years and is the qualified person in charge under the Health Canada license for the production of psilocybin. He has held senior roles in regulatory, compliance and intellectual property management.

Devil’s advocate here: Synthetic psilocybin isn’t new. Existing companies chemically synthesize it already. The reason you don’t have them bouncing all over the stock exchange is that process is costly and delivers an inferior product to real mushrooms.

Currently, companies are resorting to chemically synthesized psilocybin as the only available cGMP compliant product that is available in large volumes. The chemical process carries significant costs and is less preferable compared to a biologically derived psilocybin. Vocan’s biosynthetic process retains the stereochemistry of the natural psilocybin molecules found in hallucinogenic mushrooms, which are known to have a more positive effect than the chemically synthetized counterpart.

The GW Pharma (GWPH.Q) of shrooms?

That’s the goal. And they have the people, the plan, the patentable concept, and the shareholders to make it happen.

Bless ’em, every one.

FULL DISCLOSURE: Core One Labs is an Equity.Guru marketing client.