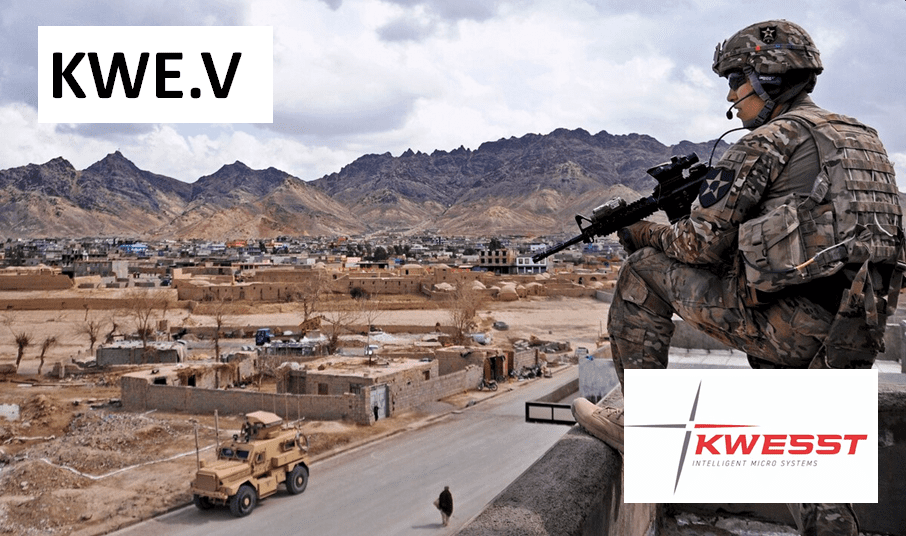 On December 8, 2020 the U.S. House passed a complicated defense bill in an overwhelmingly bipartisan vote despite numerous veto threats from the lame-duck President Donald Trump.

This week, Trump warned all Republicans to vote against the National Defense Authorization Act (NDAA).

There are two things Trump doesn’t like about this bill: 1. An amendment that would strip Confederate names from military bases and 2. it lacks a repeal of Section 230, which makes it hard to sanction twitter – when they flag his posts as untruthful.

The final voting tally was 335-78-1. The bill received over the two-thirds majority needed to override a Trump veto. The bill now heads to the Republican-controlled Senate.

With Joe Biden about to take office, Democrats will squabble internally about whether to slash the military budget – which currently sits at USD $750 billion per year.

“The United States, up until 1945, won virtually all the major wars that it fought,” states Vox, “The reason is those wars were overwhelmingly wars between countries.”

“But that kind of war has become the exception,” continued Vox, “If you look around the world today, about 90% of wars are civil wars. The three longest wars in US history are Vietnam, Iraq, and Afghanistan — all from recent decades, all these complex types of civil wars.”

Reading the tea leaves, it seems likely that defense budgets will prioritise new technologies that can save civilian lives in modern theatres of war.

Kwesst (KWE.V) is one such company. KWE has a diversified product line, based on a single core technology, called Micro Integrated Sensor Systems Technology (MISST), which involves miniaturized sensors, optics, ballistics and software which can significantly jack-up mission capability. 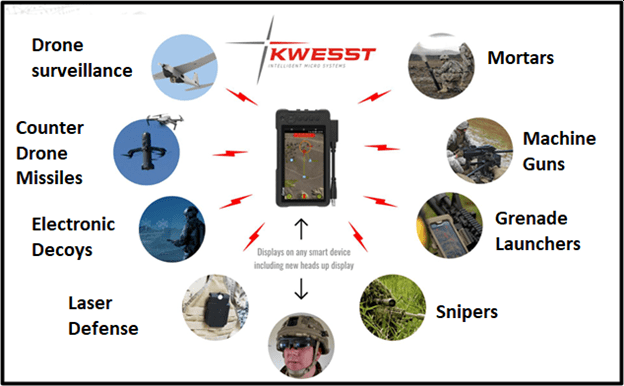 Kwesst is a new company (it IPO’d September, 2020) – but the MISST tech is not some half-baked idea scrawled on a napkin.

It has a super-star tech, financial and deal-making team.

“The company announced in September that they had completed the first deliverable capable of providing tactical situational awareness and targeting information in real-time from a drone to ground forces and their mortar weapons systems”, continued Morton, “The second deliverable, completed today, involved customer feedback from the first phase to improve about TASCS operating procedures”.

“We’re pleased at the rapid pace as well as the outcome of these exercises, especially with such a key U.S. military customer,” confirmed Jeff MacLeod, KWESST founder and CEO, “who has now requested a proposal from the Company for a next phase of expanded exercises to start in early 2021.”

The jump to a defense stock may trigger an emotional disconnect.

“There is a concern with military technology that it can end up the other side of our political coin,” stated Equity Guru’s Chris Parry in this podcast interview with Kwesst Executive Chairman David E. Luxton, “What’s to stop someone reverse engineering what you’ve got and doing “Kwesst Eastern Bloc”?

“First of all, we don’t sell to certain countries,” explained Luxton in the podcast, “But inevitably adversaries can get hold of equipment. Without giving away all our secrets, it would be impossible for someone to reverse engineer this. The secret sauce is the software. It is tamper proof. If someone tried to open it up, they would vaporise it.”

“Kwesst’s small, extremely lightweight mini-drone is, effectively, a flying bullet,” explains Parry on September 25, 2020, “It holds no charge, no explosive, no chemicals, it’s just a thick flying lump that hones in on enemy drones at up to 350 km/hr, slamming into them and taking them out, using the TASCS system for guidance”.

“One threat to ground forces that is not often talked about publicly is laser weaponry. There are weapons systems out there, in more despotic parts of the world, that fire lasers across a wide area, looking for optical weapons systems to ruin, and eyeballs to burn out. Gross, right?

So Kwesst has a product that you can mount on a tripod at your perimeter, along with a personal chest-worn version and a 360 degree vehicle mounted version, that spots the laser, locates where it’s coming from, and lets the other Kwesst systems deal with the threat appropriately.

And hey, all that’s good stuff, but advances in tech can sometimes spill over into the realm of accidental weaknesses. If all your systems are wi-fi connected, your position can be tracked by triangulating your wi-fi signal.

Enter the Kwesst electronic decoys, which deflect electromagnetic signatures with false phantom signatures. In essence, if your ‘USMilitaryWifi726’ signal is at point A, Kwesst’s system can shoot multiple copies to different places, and when the enemy comes out to tackle a unit that isn’t actually there – surprise!” – End of Parry. 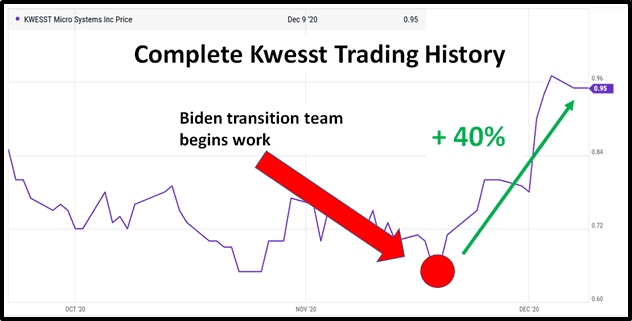 “I hope House Republicans will vote against the very weak National Defense Authorization Act (NDAA), which I will VETO,” Trump tweeted, “Must include a termination of Section 230 (for National Security purposes), preserve our National Monuments, & allow for 5G & troop reductions in foreign lands!”

Trump’s normally compliant colleagues are not all on board.

“We ought to pass the NDAA and the president should not veto it. And we should override it,” Republican Congresswoman Liz Cheney told reporters on Monday.

Smart, nimble companies like Kwesst will attract a substantial amount of this spending.