If you believe the well founded rumours that US Multi State Operator (MSO) Verano will be going public in Canada this month, you’re probably keen on getting into the stock.

If Verano completes its RTO and lists on the CSE, it would immediately become the third largest cannabis operator in the U.S. by revenue, and the fifth largest by valuation behind such rivals as Curaleaf Holdings Inc. and Cresco Labs Inc.

Why does it pull in such revenue?

Holy shit. Obviously there’s going to be interest in that RTO. It might just kick off a renewed weed run on the markets.

But if you really want to make bank on Verano, you shouldn’t be buying that stock. You should be buying SOL Global (SOL.C).

Of course, there are many who will flat out refuse to buy stock in SOL because they don’t like long-time weed asset wheeler-dealer Andy DeFrancesco.

DeFrancesco collects weed assets, and along the way has accrued a 12% stake in Verano for SOL, valued at around US$360 million if the almost US$3 billion valuation that company is going public with makes any sense.

According to a term sheet distributed to investors, Verano is planning to offer up to US$75 million in shares through a reverse takeover of Majesta Minerals Inc. – a shell company listed on the Canadian Securities Exchange – that would value the company at US$2.88 billion. Canaccord Genuity and Beacon Securities are joint book runners on the deal.

You might not like how DeFrancesco makes money, or his reputation for buying cheap early stage assets and selling them on at late stage prices to clueless cannabis CEOs are ignorant at best, and pumpy at worst, but the guy has had more than a few big wins for his shareholders. 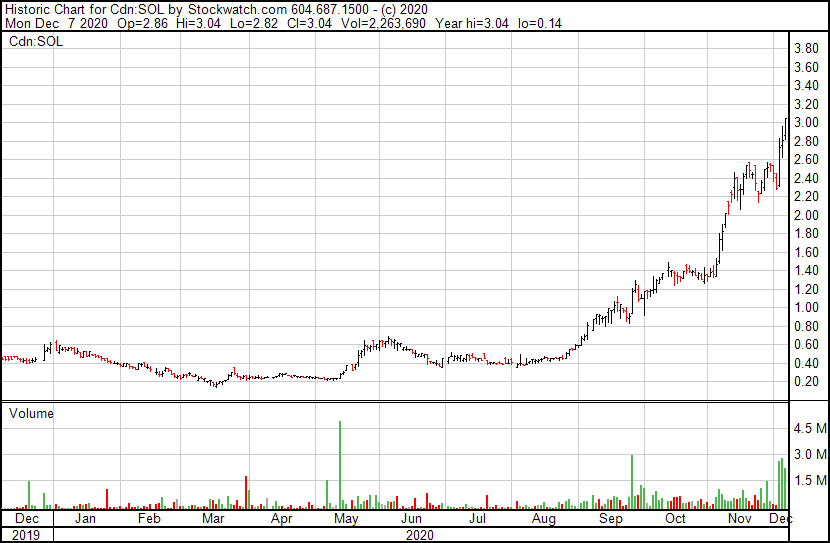 Even after that crazy run, and with its Verano stake worth a potential $360 million, SOL Global’s market cap right now sits at just US$128 million.

This means SOL’s share price could rise 200% and still not have any of its other assets or cash priced in, assuming Verano holds its value after the RTO.

That’s likely. Today they added Arizona and Florida assets to the mix.

The transaction is expected to result in a highly accretive combination of Verano and AltMed with the resulting company operating under the Verano name.

Sure, you can buy Verano stock if you want.

But Imma be buying it at 35% of its RTO price by buying stock in SOL Global instead.