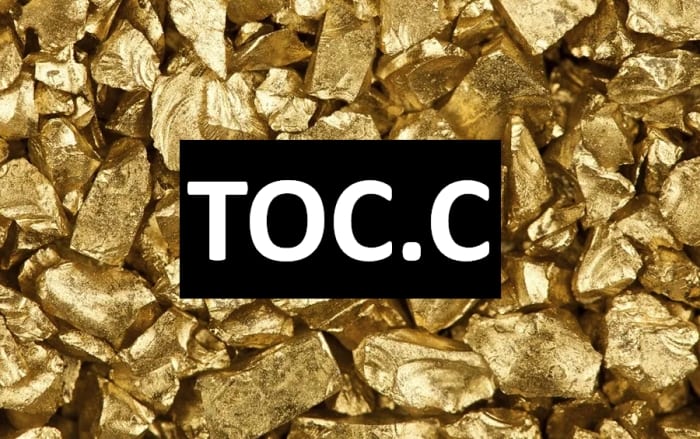 On December 1, 2020, Tocvan Ventures (TOC.C) told the markets that its previously-announced maiden drill program at the Pilar Gold-Silver Project in Sonora, Mexico has begun.

As news goes, this is a bit like telling everyone you plan to take a college course, then announcing that you attended the first lecture.

We can’t predict your grades.

It’s too early to celebrate.

There are 5 reasons Tocvan shares often surge on soft news:

1. TOC controls an under-explored Mexican gold-silver asset
2. There are only 25 million shares out
3. Gold (we believe) is in the early phase of an extended bull market
4. Management has a magic mix of rock-kickers and deal makers
5. TOC still has a micro market-cap of $10 million Canadian pesos. 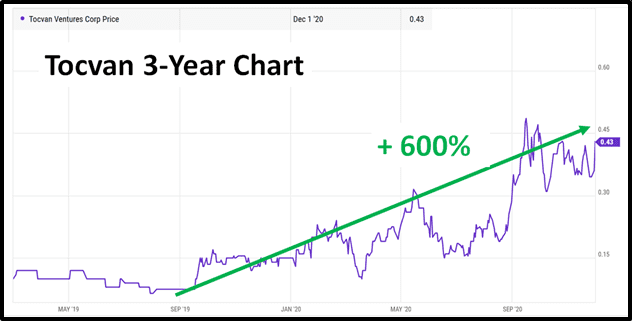 Phase I of the program anticipates 1,500 meters of reverse circulation (RC) drilling, using one drill rig at the Pilar Main Zone.

RC drilling uses dual wall drill rods that consist of an outer drill rod with an inner tube. These hollow inner tubes allow the drill cuttings to be transported back to the surface in a continuous, steady flow.

Unlike diamond drilling, it generates sample rock cuttings instead of rock core.

When air is blown down the annulus (ring-shaped structure) of the rod, the pressure shift creates a reverse circulation, bringing the cuttings up the inner tube.

Sample cuttings are easy to catalogue and keep track of, because they are marked with exact location and depth.

“Tocvan’s flagship Pilar Gold Project is located along the historic Sonora gold district within the Sierra Madre Occidental geological province,” wrote Equity Guru’s Greg Nolan on May 14, 2020, “The project is road accessible and is located roughly 140 kilometers south-east of the city of Hermosillo.

Tocvan is earning an initial 51% in Pilar from Colibri Resource Corp (CBI.V) via a series of staged payments—cash and Tocvan common shares—over the course of five years with escalating work commitments as the earn-in period matures ($2M in total).

Colibri obviously believes in the geological merit of Pilar. Though cash poor, it’s not letting the project go cheap. It’s a good deal for both companies.” End of Nolan

“Tocvan’s work over the past year has generated new target areas and shown great potential for deeper mineralization,” stated TOC President and CEO Derek Wood on December 1, 2020, “Phase I drilling will focus on expanding known mineralization within the Main Zone.”

Wood and his team are also focused on acquiring data to help create new target areas for later drilling. 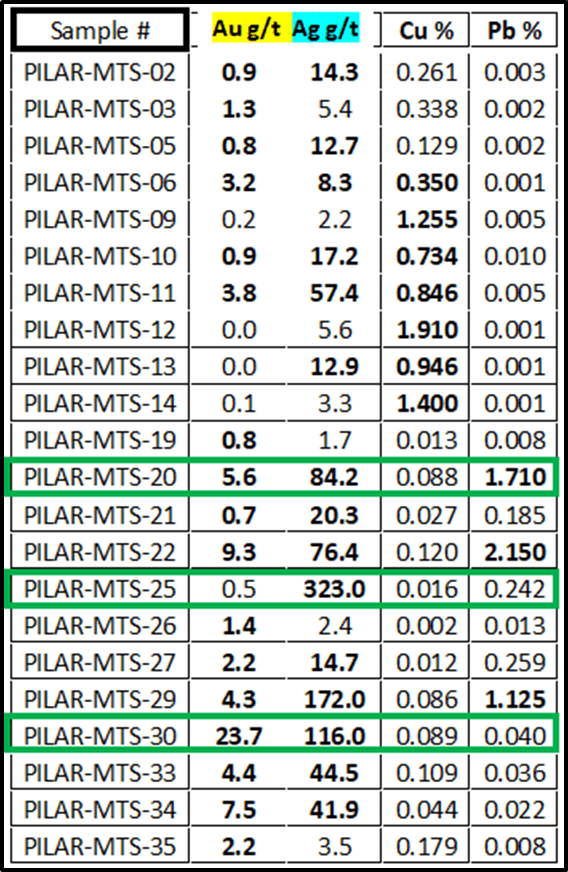 The results of Phase I will be used to define deeper drill targets (>125m) and delineate key structures for exploring on trend and parallel to the Main Zone.

A Phase II program will utilize the key structural data acquired in Phase I to begin testing the feeder-pipe structures interpreted from ground geophysical surveys (See About Pilar section in this release).

In addition, drilling is planned at the Pilar Main Zone to expand the area of known mineralization, building upon the success of previous drill programs.

Plans include step-out drilling of drill holes JESP-13-15 and JES-18-24 that intersected:

Confirmation drilling of historic drill holes from 1996 and 1997 will also be completed so this data can be included in future resources estimation.

In the December 1, 2020 press release, Tocvan announced Mark T. Smethurst will be stepping down from his role as COO. Mr. Smethurst will remain on the Tocvan Board of Directors as an important advisor to the Corporation.

Tocvan Director, Brodie A. Sutherland, P.Geo will be taking over as VP Exploration and seeing to the advancement of the Pilar Project. Mr. Sutherland has fourteen years experience managing exploration and resource definition drill programs across the globe.

“Tocvan would like to thank Mr. Smethurst for his role in developing the Pilar Project to date,” commented Wood. “As the Pilar Project advances we are excited to have Mr. Sutherland take on a management role to see to the continued development of Pilar.”

“When we first talked about Tocvan Ventures (TOC.C) back in June, it was selling for around $0.15 and nobody was really talking about it,” wrote Equity Guru’s Chris Parry two months ago.

“But Tocvan is doing the work and getting the sort of results from that work that guys who like gold, like to see,” continued Parry.

“And when they tell people about it, they don’t yell crazy hype, they put out technical news releases that will send the common man to sleep, but alert the mining nut that they should pay attention in the weeks and months forward.

If you were paying attention to us back when we first talked about Tocvan, you’re already in multi-bagger territory. That’s a good thing, for sure, and evidence that the TOC brains trust are doing what they told us they would do”. – End of Parry.

“Field crews are on-site with COVID-19 mitigation plans in place and are ready to commence drilling,” stated Wood.

Pet Peeve: To all publicly traded companies – if only there was an un-fussy, modern, colloquial word that meant “commence”.

I can’t even BEGIN to think what that word might be.