The rise of FansUnite (FANS.C) is a profit superspreader event

If you’ve been close to a company as it’s gone public, you’ll have no doubt experienced the issue for yourself: Someone, somewhere, who got in early and cheaply decides to break ranks with the other founders and deal guys, and dumps their shares the first chance they get.

There are several problems with this, not the last of which is perception. When you burst out of the gates at $0.50 and things fall away over a month to under half that, despite great news coming out in the meantime, the general public begins to believe you were all in on it, that the deal has gone bad, that it can’t be trusted to come back.

Bringing that deal back requires serious teamwork, finding new buyers, convincing the sellers to hold tight, and a belief that you’re just too damn good to stay down.

In fact, we made a video about why the sell-off may have happened, and the likelihood a tunaround was coming, in early November.

Almost immediately, it took off. 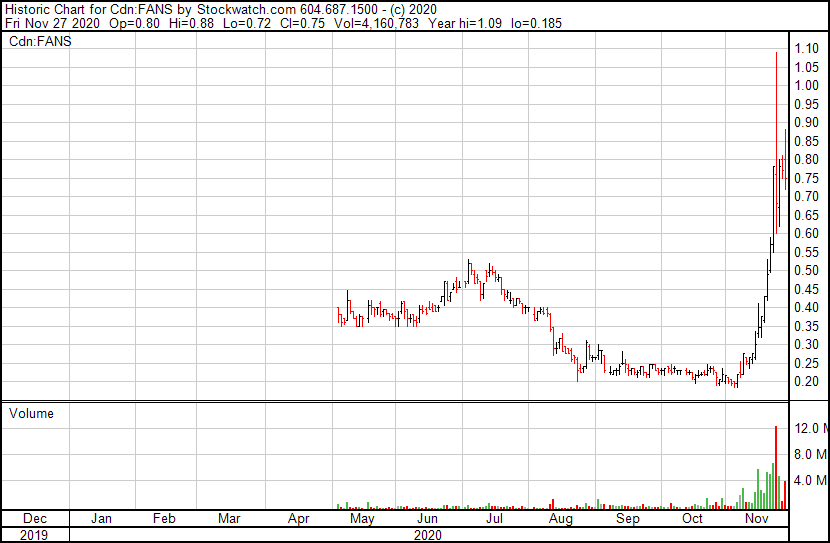 If you’ll excuse the language, holy shit am I glad I held fast with this team and sat on my shares as they halved. Every pubco executive will tell you, when they’re two months into a sell-off, that they’re now in strong hands, and usually you’re a sucker if you believe them.

But the team behind FansUnite did the work, turned it around, found investors with courage and foresight and hit the fucking afterburners.

That’s a four-bagger inside a month.

Now, obviously the hockey stick won’t stay that way. As you can see in the trading volume at the bottom of the chart above, there’s been some profit-taking in recent days, but while over 12 million shares were traded on one of those days, the bottom didn’t fall out of the chart. This means they’ve got interested buyers coming in and the stock is churning to a new crowd.

It also means a lot of true believers are leaving CEO Scott Burton the hell alone, instead of pounding his voice mail out every morning.

For the uninitiated, FansUnite is an online gaming company that, with its merger with Askott Entertainment earlier this year, has a full lineup of online casino gaming options, as well as e-sports betting features, and its own online sportsbook in the UK that has seen revenues jump during covid.

You can read more about it in my piece here.

For FansUnite, Covid-19 wasn’t a business killer, because they adapted as it began to take hold. As live sports paused for a few months and their Scotland-based McBookie sportsbook waned, a shift to new online casino games brought the revenues back. And as sports soon returned, McBookie saw sports betting revenues now landing in addition to the new casino revenues. In addition, as the earlier mentioned Askott Entertainment merger began to take root, e-sports betting began to add to the offerings, making for a nice financial statement.

Generally speaking, I’m not a fan of chasing a rocket ship, and if I wasn’t already in on FANS, I might find that chart concerning.

But I would watch it for a while, and see if the leveling off of the last few days forms a new base to rise from, or gives way to a little more profit taking.

There are big things on the way, but timing your entry is the artform you should be focused on.

For the rest of you, who got in when we started talking about it, at around $0.35, you’re welcome.

FULL DISCLOSURE: FansUnite is an Equity.Guru marketing client, and we bought stock at an earlier raise.