The S&P and the Dow Fake Out? A Short Swing Trade Set Up. 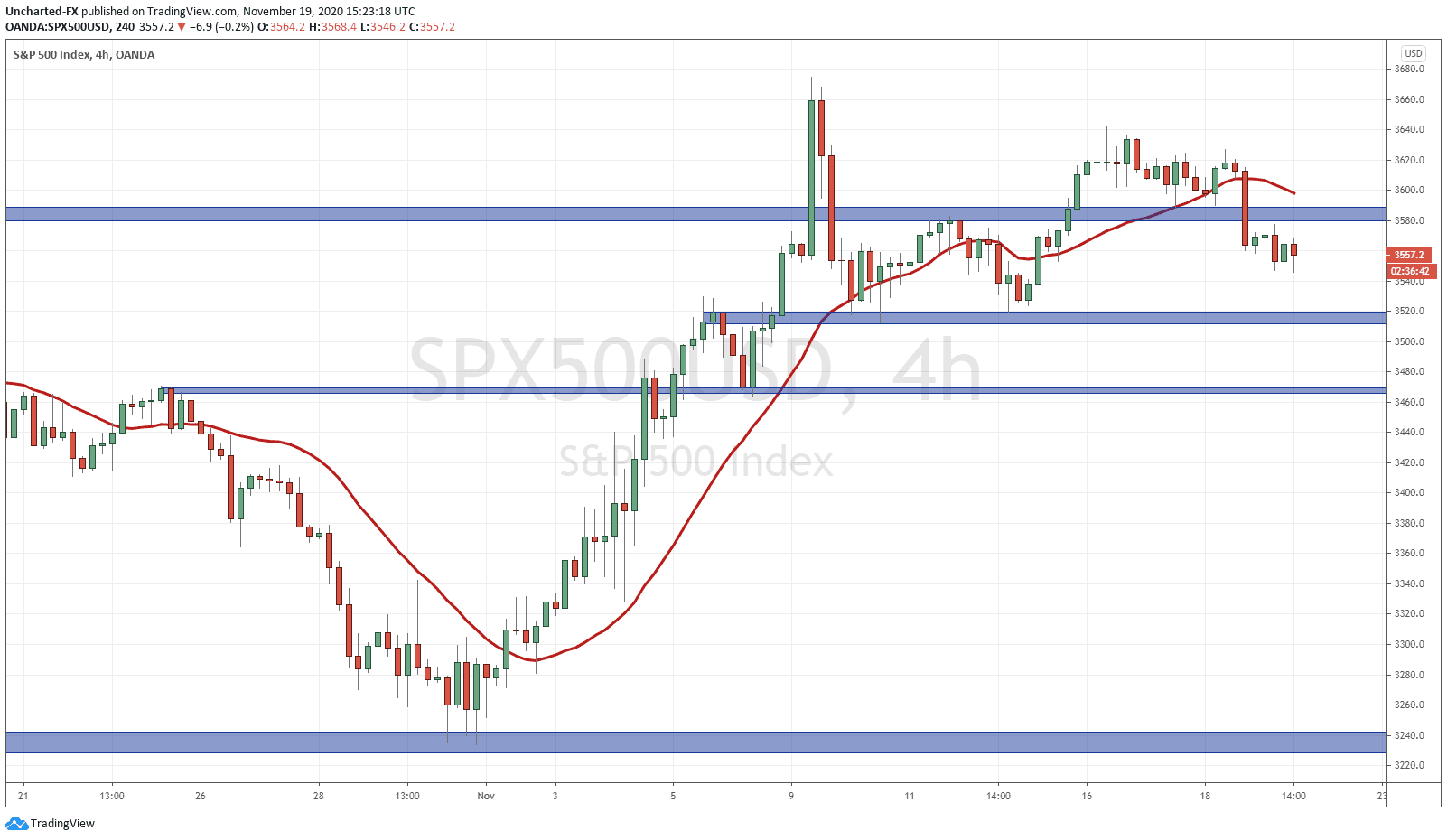 After seeing markets close green, and into new record high territory on Monday on the back of the Moderna vaccine news, the S&P and the Dow Jones have printed a fake out. This is what I mean: 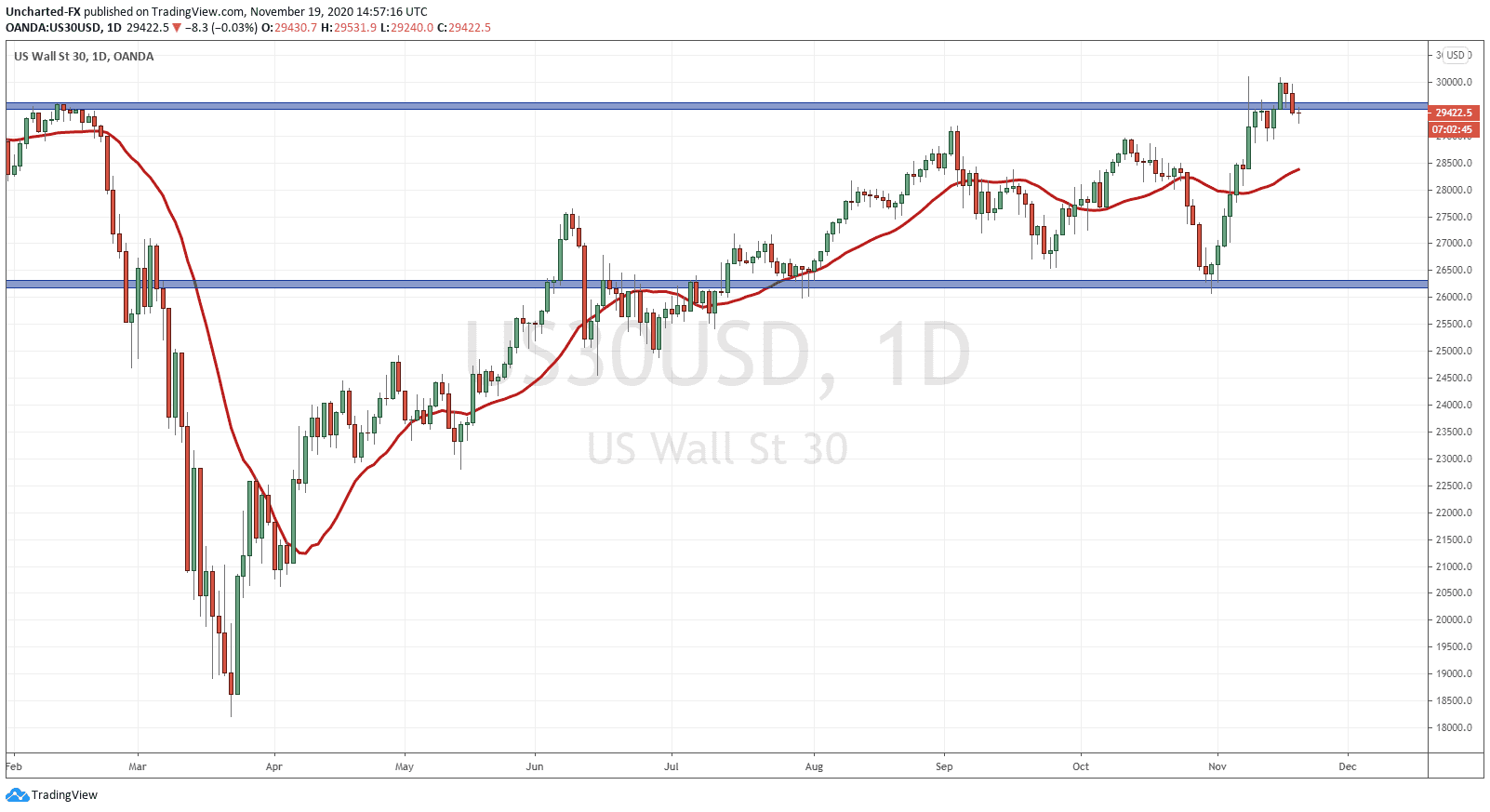 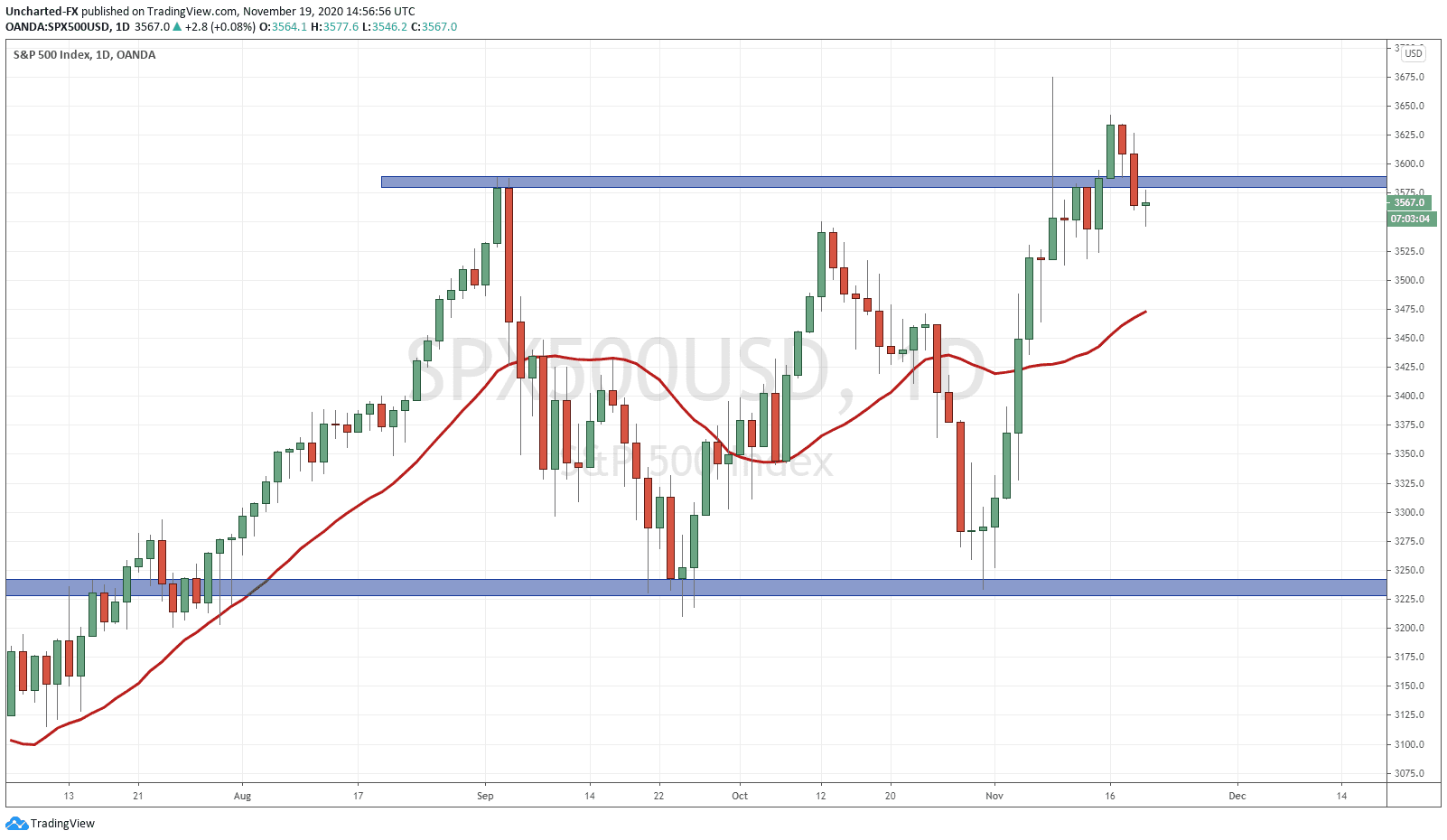 When breakouts occur, we tend to see price retrace or pullback down to the breakout zone and retest it as new support (price floor). This is normal price action which my readers are very familiar with. Sometimes this pullback happens right away, or price can continue to rally on momentum before pulling back down. The truth is that the retest of new support has to occur at some point.

As you can see from the S&P and the Dow Jones daily charts above, yesterday’s candle closed BELOW our new support zone. This is what we could call a fake out break out. Because price failed to hold above the new support, we can say that the buyers could not step in and defend the price floor which would carry the momentum forward.

Hopefully this will not be confusing to anyone, but now that price closed back below the support zone, what was now support becomes resistance (price ceiling), meaning that the sellers will need to defend this zone for price to fall further.

Long time readers know my take on stock markets. I still think they head higher in the long term because there is nowhere else to make yield. However, this does not mean that we cannot see a pullback in markets. Nothing moves up or down forever. I am not calling for a new bear trend, but just a slighter pullback before buying the dip.

Some are asking why markets are weak after the vaccine news? Well it seems the markets are getting spooked on rising Covid cases and restrictions. We just received data today which challenges the economic recovery narrative, and points to perhaps a second wave of layoffs. Mind you the US jobless claims are still coming in quite high every week. But today, US Jobless Claims came in at 742,000 which is the first increase in five weeks! A sign that the resurgent viral outbreak is likely slowing the economy and forcing more companies to cut jobs.

Yes, there is a difference between the real economy and the stock market. The stock market has diverged from the real economy due to the hunt for yield. We know more easy and cheap money will be coming, which will force money to hunt for that yield in stocks. But this data is just adding some uncertainty to the markets. Again, I am not calling for a major bear market or anything, just a short set up to zones below.

Looking at the 4 hour chart of the S&P 500, I want to point out the price action above 3580. After breaking out, we just ranged. No momentum was created to carry price forward and upwards. In fact we ranged for 64 hours!

The breakdown occurred yesterday, and overnight, we did retest the 3580 zone, which is now our resistance, before moving lower.

So as mentioned before, the 3580 zone is the resistance I am working with. If we get a close back above this zone, then this trade idea is nullified and we could either just range, or continue the move higher making new record highs.

As long as price stays below, I am targeting the support zone at 3520.

Now I do not want to get too ahead of myself, but if price hits 3520 and then bounces, we could actually be setting up a head and shoulders reversal pattern. That would mean further downside on the break of 3520. The second support I have below is just above 3460.

This was a short trade presented to Equity Guru’s Discord Trading Room members yesterday on the break below 3580. The trade is still valid until resistance is broken.