Smallcap investors largely see the psychedelics space in one of two ways; you’re either in the ‘this may be big one day but there’s not a lot of fat on the bones just yet so I’ll wait’ camp, or the ‘fat schmat, everything is a trade and who cares about tomorrow’ camp.

I’ve about a year of psychedelics experimentation under my belt at this point and, to say I’m a fan is to underplay it. It’s not so much that I’m out at the Third Beach drum circle welcoming sky elves down from the clouds with pixie girls – more that I’ve found psychedelics to be something that has clarified my life in the past and present, and which has helped guide my future.

Let me get down from the cloud for a second and put it in layman’s terms; we all have shit to deal with in our lives, but mostly we tell ourselves we’re doing fine the way things are, and our faults are not bugs but features. Shrooms strip away those defenses and allow you a moment to see things as they really are, and what makes those things happen. It shatters your defenses and lets you admit mistakes. Afterwards, you remember what you discovered and there’s no hangover to make you wish you’d never done it, at least for me.

So, obviously, I want this for everyone. This will be a big, important industry.

It will be what cannabis was sold to us as.

But we should also make sure to avoid the mistakes made in the cannabis rush.

The psychedelics sector of the public markets right now is trying to catch that happy feeling in a butterfly net and normalize it, but the problem it’s having is the same problem cannabis companies had in 2013, in that the good stuff isn’t actually legal yet. Sure, you can fuck around on the peripheries a bit, but the real business isn’t there yet, outside of Oregon, which just legalized anything you could ever want to put into your system.

The cannabis industry of 2013 involved brokers trying to track down bikers who’d scrub up alright and hadn’t yet been busted in their Maple Ridge grow ops, so they could be put forward as pubco CEOs in a world of coded press releases and insane promises we’re only now fully disbelieving. It was a time when government bureaucracies were being forced by courts into begrudgingly legalizing what they’d faught solidly against for decades, making rules up on the fly, holding grudges against those who had survived in the grey market as fat money staked its claim in empty shell companies, claiming they’d have a plan just as soon as a plan was legal and would be licensed just as soon as there were licenses to be had and, in the meantime, were the ‘most advanced [blah blah blah] in the industry’..

Today’s outlook for psychedelics is much more mainstream in that we know Health Canada is prepared this time, that it’s moderately enthused this time, and is even trying to pry open a few doors so that responsible players in the shroom space can make responsible progress on the medical front, sooner rather than later.

So, to me, the play in shrooms isn’t truffles in Holland or Bruce Linton on an advisory board or neutriceutical teas or ‘we bought a mushroom farm in Langley.’ It’s who can get me closest to the end game, which is the outfit that Health Canada will trust, and will open the door for first, so that it will become the ‘Tweed of the shroom space’?

Right now, the fat money is trading Mind Medicine (MMED.NEO) which has US$37 million in cash, loses $8m a quarter, and is rolling out a bunch of studies on LSD microdose use for adult ADHD patients. That’s neat. It’ll do more with psilocybin and MDMA and others still, and one day, down the line, they may get a medicine out of it, after such medicines are approved by health authorities.

The $138 million market cap on FieldTrip (FTRP.C) is similarly tough to justify based on what it does right now.

Sure, the folks who climbed in a month ago rode the promote nicely, but if they stayed in they’re getting beat up every morning. 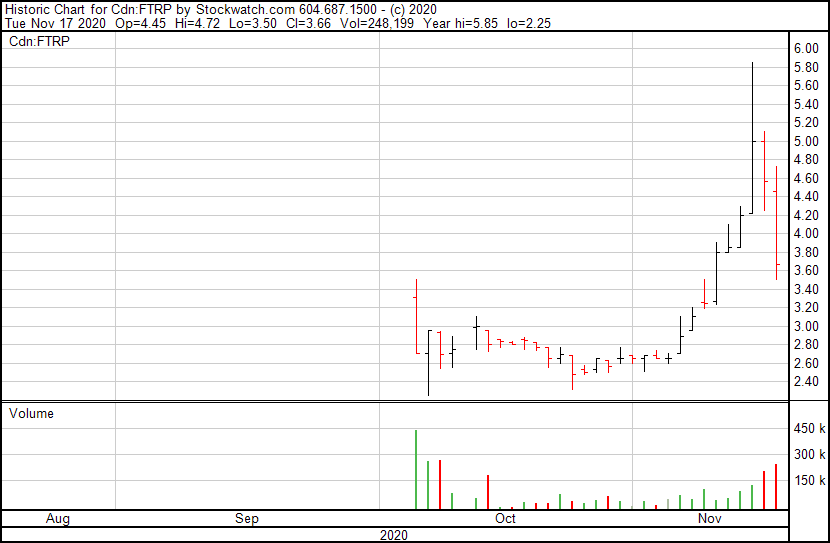 FTRP has four locations in Canada and the US which, from what I can find on their website, have comfortable chairs, gongs, and plants. At their present valuation, each of these is worth around $40 million. I imagine their revenues, when reported, won’t be near that figure.

For mine, actual clinics with actual patients are a worthy step one in the sector because, though using actual (currently) illegal substances is forbidden, ketamine treatment is a useful legal stopgap. There’s money here, if folks go about it the right way.

What there isn’t, however, is scale.

For scale, as we saw in the cannabis business when medical clinics became a business for the then-unlicensed to pursue while they waited for other opportunities to open up, one needs to be considered a trustworthy place to go. A shared office space with a sock on the boardroom door handle won’t cut it. Neither will mining company CEOs who want you to believe they really know their mushrooms, even while quietly admitting they don’t use them.

Cashed up and ready to pounce on opportunities as they emerge and more likely to get offered those opportunities than most? Definitely.

Frankly, if I’m going in on a shroom deal, I want a valuation that hasn’t already been looted, I want a share structure that isn’t set for shareholder sodomy in three months and 29 days, I want a board of directors and C suite that contains people with priors in the space, not the usual gaggle of ‘Bob has raised $230 million for 87 Canadian companies as a mail room intern at Canaccord’ and ‘Frank ran the cafeteria at Canopy Growth Corp’ bullshit.

On Tuesday, there wasn’t any of those around that I’d consider.

Delic Holdings (DELC.C) is not a $100m company with $5m in assets and $8m in quarterly losses.

It’s a tightly held, mostly escrowed/pooled stock with 51 million shares out at the open, and a $10 million market cap. Roughly 16 million of those shares will be free trading at the listing debut. Insiders hold 30 million shares and will have them in escrow for three years. The shell company it rolled into has a six month hold on 5 million more.

In other words, you’re not going to get railed like a lumberjack’s girlfriend for taking part as a retail investor.

The executive team have cannabis form, in that the founders, Matt and Jackee Stang, came from the leadership team at High Times. That’s a recognizable brand and audience that they bring from a demographic that is motivated to try and participate in the psychedelic revolution. Their media presence in the psychedelic space is substantial, in that they hold the Meet ‘Delic live event and media brand, are neck deep in psychedelic content, and have a heavy presence in social media as they get to where the enthusiasts are.

On the director team you’ll find Paul Rosen, former President and CEO of Pharmacan, which you might know by its more current name, the $3.4 billion Cronos Group (CRON.T). The advisory board runs the gambit from yoga companies to coffee companies to neuroscience groups, angel investors, think tanks, nutrition experts and more.

You know what they don’t have, at least today? Announced deals.

No question about it, this isn’t an investor deck hyping a slew of small time pickups to bulk up a market cap, this is an early stage media company with a low, justifiable cap, going out at a stage where there’s an opportunity for everyone involved (not just the early paper holders) to make money on the way up, and with a team that has done it before in several sectors with relation to this one.

Those deals will come hard and fast after its public listing debut, and from talking to people near the deal, expect ketamine to be an early focus, along with revenue earning (as opposed to projecting) legally operating acquisition targets.

If any team can get folks into a brand, this one can. And if anyone can bring aboard sector entrepreneurs who they’ve already built trust with, this group can.

As an early stage play with plenty of upside, I like it. Watchlist the thing and keep an eye out for dealflow.

FULL DISCLOSURE: Delic Holdings is an Equity.Guru marketing client and we have bought stock in the company.