Kuya Silver (KUYA.C) – building the next high-margin silver mine 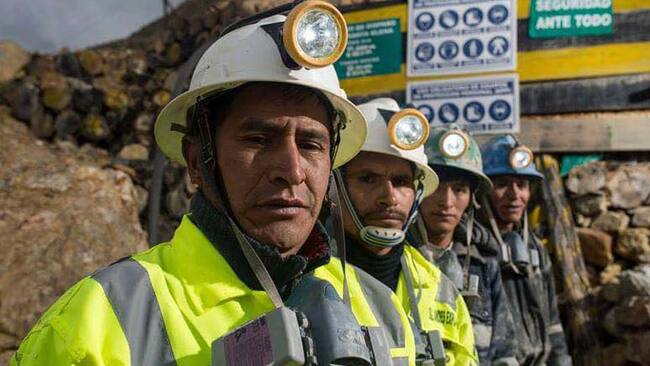 EDITOR’S NOTE: The following is a Highballer article that was published one week back (all values/prices herein reflect trade from Nov. 9)…

We have eleven (11) companies populating the Highballer ExplorerCo shortlist. Of those eleven, our exposure to silver is limited. In this episode of Highballer, we seek to correct that imbalance with a new addition to our shortlist—Kuya Silver (KUYA.C).

For those wondering, Kuya is a simplified form of the Quechuan word “Qhuya”… which means “Mine”.

The Kuya story began back in 2016 when David Stein, Kuya’s CEO, went off in search of under-capitalized assets in South America.

In his search Stein came across the Bethania Silver Mine, which, due to operational inefficiencies, poor market conditions, and a lack of working capital, was shuttered in 2017. 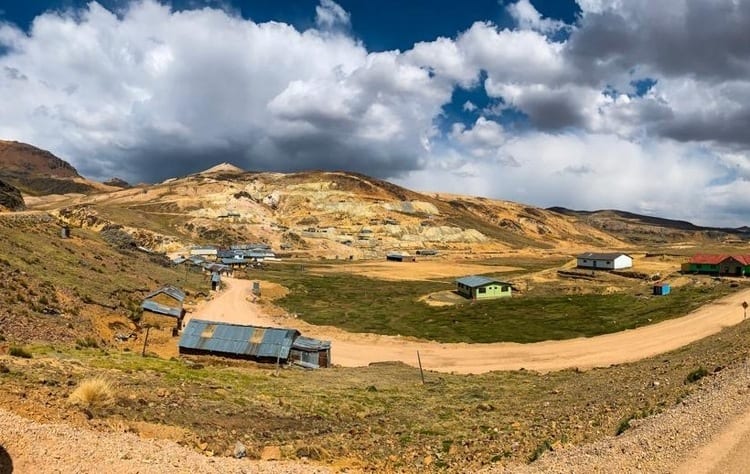 The 1,750-hectare project is located in Central Peru, over the Cordillera Central, an area known for its prolific base and precious metals belts.

Geologically, the region is host to numerous styles of mineralization, including epithermal Au–Ag, porphyry Cu-Au-Mo, and replacement/skarn Zn-Cu. The Bethania mine is located along an interpreted north-northeast fault line within Southern Peru’s Au–Ag Epithermal Belt.

“The Santa Elena Concession (Bethania Mine) covers Tertiary volcanic rocks that include andesite, dacite and tuff. All of the mineralized veins discovered to date are hosted by altered andesite and/or dacite with some anomalous mineralization hosted by silicious bodies of stockwork quartz-breccia.”

After entering into a share purchase agreement for an 80% stake with the underlying owners—a combination of cash, shares, and work commitments—Stein went on to front Kuya Silver with Bethania as its flagship asset.

Pursuant to a share purchase agreement dated October 6, 2017, as amended (the “Share Purchase Agreement”), the Company has to date invested USD$4.3 million towards fulfilling the terms of the Share Purchase Agreement to acquire an 80% interest in S&L, including USD$685,000 paid to the owners. Further, in order to complete the acquisition of the 80% interest in S&L, the Company is required to pay the current owners of S&L an additional cash payment of USD$2,815,000 and issue to them 3,670,000 common shares in the capital of the Company (the “Kuya Shares”).

In accordance with the terms of the Letter Agreement, the Company has agreed to acquire the remaining 20% interest in S&L (the “20% Purchase”) by making a cash payment of USD$1,325,000 and issuing USD$425,000 worth of Kuya Shares, subject to the approval of the Canadian Securities Exchange, using an issuance price equal to the average closing price of the Kuya Shares during the five trading days prior to the closing of the 20% Purchase and using the CAD/USD exchange rate on the day immediately prior to the date of closing.

On July 23rd, the Company closed an oversubscribed private placement consisting of 7,174,590 subscription receipts priced at C$1.65 per. And with a recent RTO of Miramont Resources in its rearview mirror, the stage is now set for a dramatic push along the development curve.

There were no dilutive bells n whistles—no warrants—attached to this PP.

The Bethania Silver Mine has been an on-and-off, stand-alone mine with no processing capacity for some four decades. Previous operators trucked the ore to various concentrate plants in the region—up to 200 kilometers away—resulting in a grossly inefficient operation.

Kuya plans to remedy these stand-alone limitations by building a 350 tonne per day crushing, grinding, and flotation circuit.

On August 24th, the Company received its EIA from the regional government of Huancavelica, giving it the green light to push development further along the curve.

This EIA approval process involved input from the local communities from day one. This is a region steeped in the mining culture.

“Not only is the permit a critical step in restarting production from the Bethania mine, but our team and stakeholders can take pride in our design for a modern, environmentally conscientious operation, particularly in terms of water usage, surface disturbance and overall efficiency.” 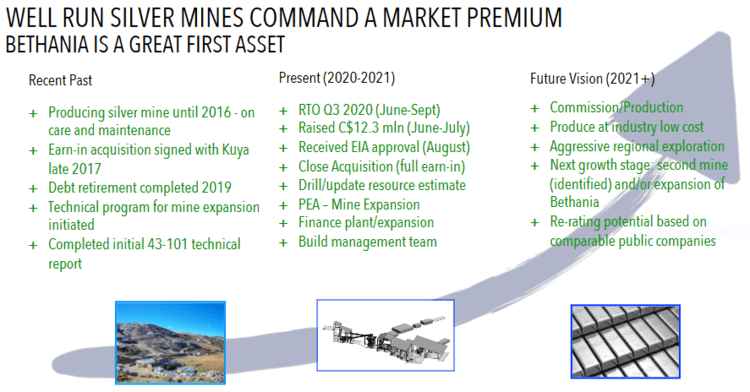 In 2014, the mine saw the extraction of 28,788 tonnes of ore, producing 425,000 ounces of AgEq, targeting only lead and zinc by-products (Bethania also has copper and gold credits).

The envisaged 350 tpd processing plant might sound modest, but the Company has a head-grade of 17 ounces per tonne in its crosshairs.

The high-grade nature of Bethania‘s epithermal veins should yield 2M ounces of silver per annum (2.7M AgEq) at that volume.

Bethania appears destined to morph into a low-cost/high-margin producer with a low initial CapEx of US$10M.

All-in sustaining costs are expected to ring in at roughly US$11 per oz, among the lowest in the industry.

These robust economics should see payback within six months or less. 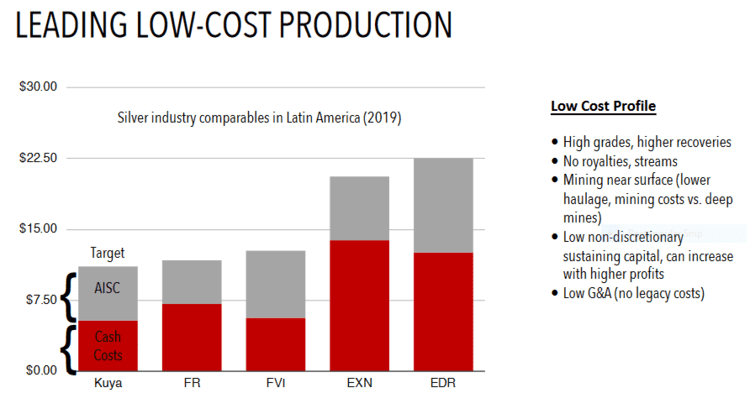 The elimination of toll milling and long haul trucking costs will go a long way towards encouraging growth.

Bethania‘s copper and gold credits, which were brushed aside during the toll milling years, will also be targeted, driving costs down further.

Note that there are no underlying royalties attached to this project, no streams. 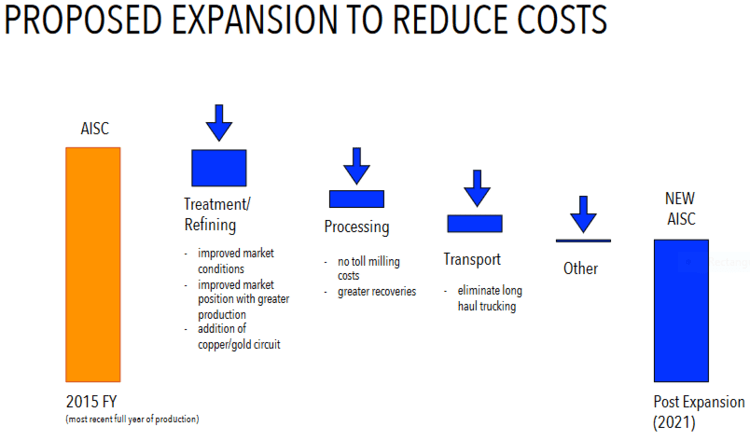 If you can build a mine and go cash-flow-positive, quickly, you have an opportunity to grow and expand, especially when the underlying metal goes on a tear

Start small and grow through production and acquisitions… a business model that has served others well. 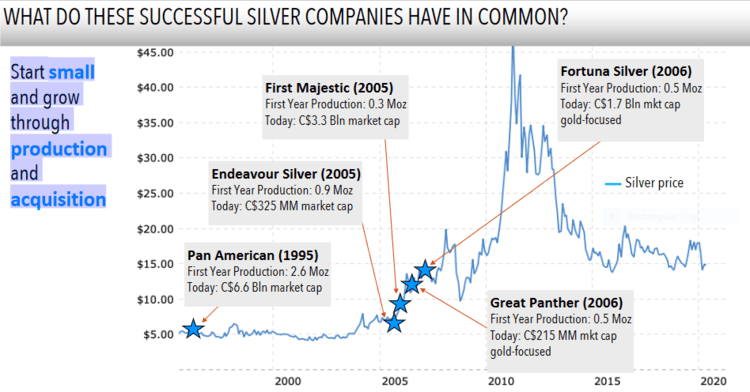 The resource expansion and exploration upside

The exploration upside at Bethania has to be considered excellent.

Previous operators mined the deposit down to only 120 meters. But these Peruvian epithermal vein systems often go down 800 meters or more.

The geology here is predictable. Experienced miners will argue that drilling off a resource isn’t necessary—simply follow the veins.

Some of the highest grades at Bethania were encountered along its lowest levels.

Note the grades highlighted on the slide below.

Note the upside that exists at depth and along strike (fat arrows aplenty).

And note the scale on this map (bottom right).

“The focus of past on-vein exploitation has focused on east-northeast trending systems but numerous north – northwest trending veins have seen little if any exploration and testing. The total lengths of the vein system are not clear for all the veins and there is evidence that the northeast-trending veins could extend several hundred meters along strike. In addition, many of the veins continue at depth as evidenced from underground mine developments.”

On October 7th, the Company announced that it has been moving ahead with detailed engineering and process plant optimization. They also plan to initiate metallurgical test work as part of this optimization process.

As per this Oct. 7th press release, Kuya should have boots by now conducting surface exploration in and around the mine area. This will lead to a first-ever diamond drilling campaign, one designed to increase the confidence of the historical resource, to assist in planning mine production, and to further their understanding of the geotechnical nature of Bethania’s subsurface layers.

This maiden drilling program will also lead to a 43-101 compliant resource estimate and the initiation of a PEA later this year.

Exploration drilling will begin in Q1 of 2021, testing targets at depth and along strike.

I had the pleasure of speaking with Kuya’s Tyson King back on October 2nd and came away impressed with the Company’s vision/plans for a fast track production scenario.

According to King, the project’s (potential) economics held sufficient allure when silver was trading at $16 to $17 a few short months back (silver tagged a $26 handle earlier this AM). 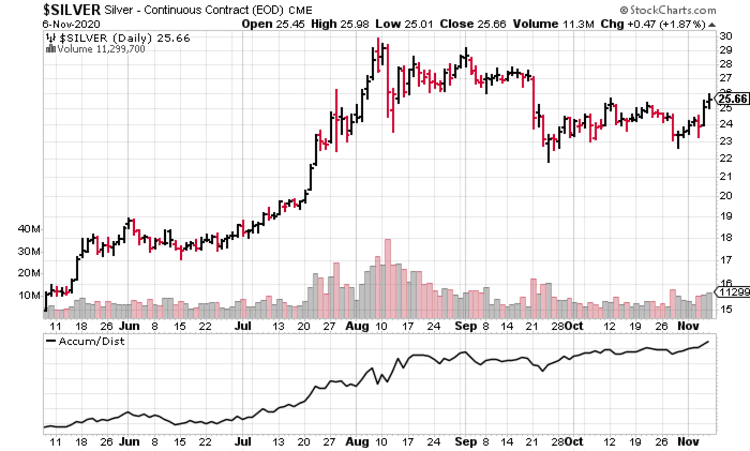 The investable silver universe is quite small. This lack of choice drives valuations higher.

With buoyant metal prices as a backdrop, the re-rating potential here looks excellent IMO, even after its strapping ascent in recent sessions (Kuya began trading only one month back). 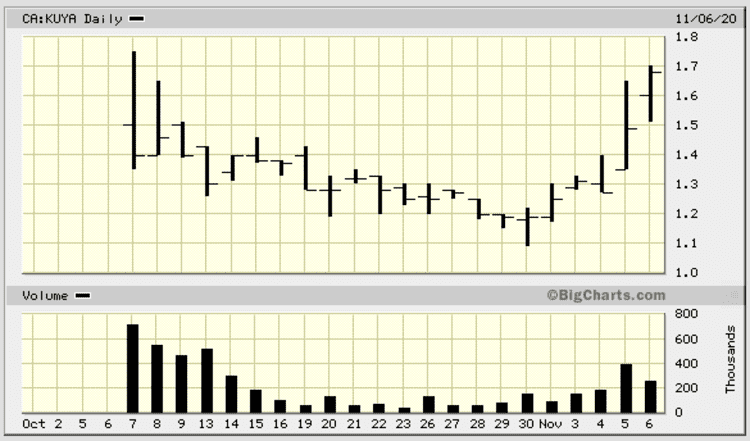 Full disclosure: We have no business relationship with Kuya. The author does not hold shares in the Company (not yet).